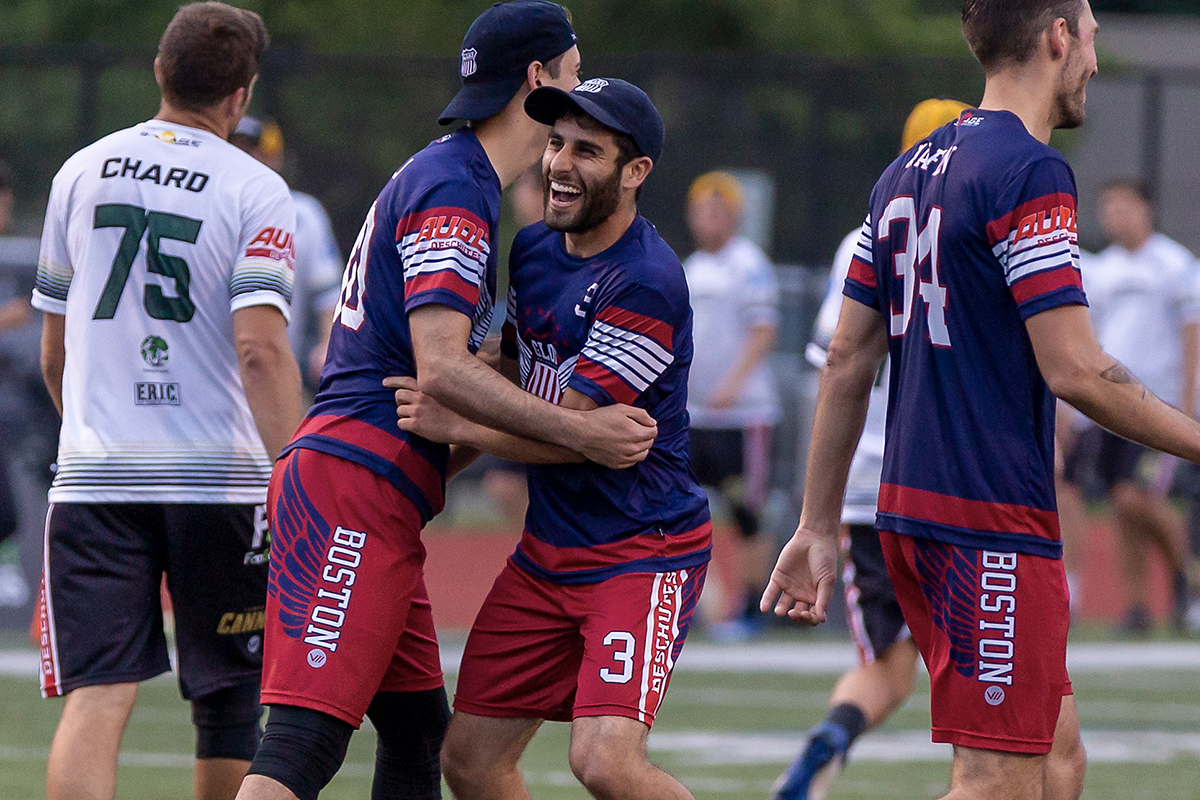 As Boston Glory’s center handler and primary offensive weapon, Ben Sadok was one of just two players to finish with over 2,500 receiving yards and over 2,500 throwing yards in 2021. A big reason for his success as a receiver was his ability and willingness to release from the backfield, as he was able to consistently catch defenses off guard by abandoning his handler spot to strike deep with his legs.

Releasing from the backfield can be extremely valuable to an offense. It’s one of the most effective ways to start a deep cut because when compared to starting the cut downfield, the added space allows for more time for the cutter to gain separation. The defender is also typically set up to stop a handler cut within the backfield, often positioned between their matchup and the disc, so the sudden downfield cut can gain multiple yards of separation within seconds.

Set up in the red zone, watch Sadok in the above clip at the front of the stack guarded by Raleigh’s Ethan Bloodworth. Sadok is the second handler here, and Bloodworth is likely expecting some sort of quick cut within 10 yards of the thrower to get the offense moving with the hopes of continuing the motion to a cutter in the stack. He’s positioned between Sadok and the disc, and with the rest of the stack set up vertically in the middle of the field, Sadok knows he has that front-cone end zone space open. So after a quick hop, he runs away from Bloodworth, gains immediate separation, and lays out for the Glory goal on the 25-yard flick from Ian Engler. This works particularly well because the whole team is on the same page about Sadok’s role in the offense; he’s the initiator here and has the freedom to attack downfield, so no other cutter is going to cut into that space until they’re sure Sadok doesn’t want it.

Sadok’s 31 goals and 2,788 receiving yards in 2021 didn’t come by accident. His cutting ability is rare for a handler; no other player with 400-plus completions had more than 20 goals, let alone 30. A big part of this production comes from his comfortability working downfield after he’s cleared out of the handler set. Many handlers may release from the backfield and attempt a deep cut, though if they’re not thrown to, they’ll slowly work their way back towards the disc. Not Ben.

There’s sort of a second level of catching his defender off guard, after the initial push downfield, that comes when the defender is expecting him to make his way back towards the disc. He’ll start doing this, but then plant and turn, taking off deep like a natural cutter. Take the below play from Boston’s Week 2 game against Atlanta as an example. After having cleared out of the handler space, Sadok cuts from the back of the stack in towards the disc, and he’s timed the cut to be a quick continuation option after the swing. He could take the short five-yard gain, but he’s not interested; watch as he checks back over his shoulder in the direction of the end zone as he cuts in. He sees no one in the deep space, so it’s his for the taking—he plants, takes off down the far side of the field, and runs onto the huck for the easy goal.

Against Raleigh, he gets forced out of the handler space when the disc swings to his side of the field and starts an initial deep cut. When it gets looked off by the thrower, Sadok settles into the back of the stack, and just like his teammate in the red zone, Raleigh’s Trevor Lynch is positioned between Sadok and the disc. Sadok again uses this idea that handlers need to get back to their position in the backfield to his advantage. He simply runs away from Lynch, even after settling into the deepest part of the stack, sprinting downfield for the Tanner Halkyard huck.

Maximizing an offensive weapon like Ben Sadok is built into the framework of the Glory offense. Yes he’s a handler on paper, and does spend most of his time in the backfield, but it's his comfortability and borderline “surprise” ability as a cutter that helped Boston finish as the second-highest scoring team in the league last season.