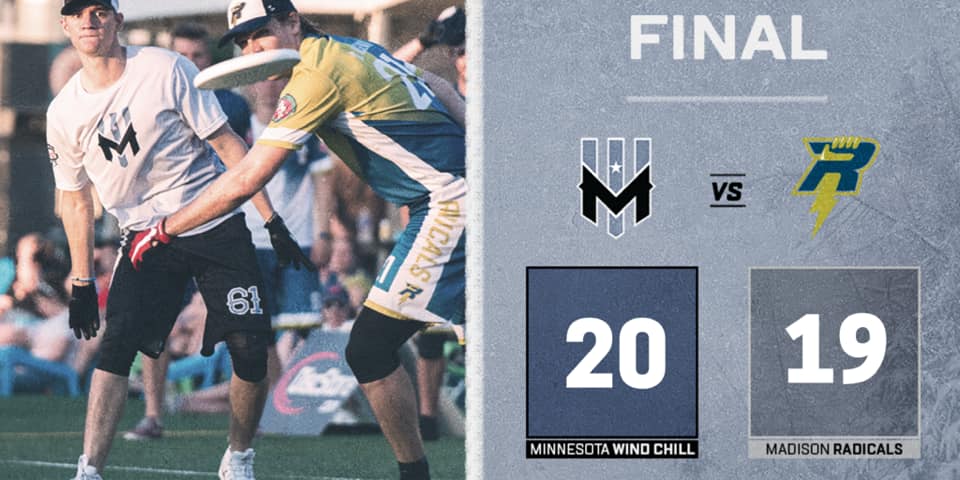 For the first time in 2,190 days, the Madison Radicals lost to a divisional opponent at home. The Wind Chill took down the defending AUDL champions 20-19 at Breese Stevens Field in Madison. 2,190 is 47 games worth of days, an astounding streak of wins against divisional opponents at home. The Minnesota Wind Chill were the first team in the Midwest Division to finally break through the home field advantage that is Breese Stevens Field.

The game started out shaky. Shaky in a way that just seems to happen to divisional opponents in Madison. Madison is so often able to slowly beat teams. Slowly but surely taking advantage of mistakes, while not making any themselves, then suddenly the lead is insurmountable. On Saturday night, however, the Wind Chill were able to counter Madison’s attack. When they went down 0-2 very quickly to start the game, they didn’t give up. They kept taking chances, attacking and playing their game.

Immediately following the 0-2 deficit, the Wind Chill countered with a hammer to the end zone to new Wind Chill addition Alex Jirele. After an 0-2 deficit, Minnesota scratched back into it and ended the quarter with the score tied 6-6. The tight first quarter would be foreshadowing for the rest of the game.

With the clock running down in the third quarter the Radicals received the disc with a chance to go up a point going into the fourth quarter. This was a big point and could have totally changed the complexion of the game. The Radicals turned the disc over and the Wind Chill had to quickly get the disc upfield. A contested deep throw to Isaac Leonard looked to be too far. But thanks to an integrity call from Pat Shriwise of the Radicals, the Wind Chill would get the disc on the goal line with one untimed throw to go up one going into the fourth quarter. Facing a double team, Isaac looked towards the end zone and split his defenders to find Brandon Matis to end the half up 17-16 for a huge goal capped off with an emphatic spike.

The Wind Chill went to the fourth up one. They’d be receiving with the opportunity to go up two and take their biggest lead of the game. That’s exactly what they’d do. Minnesota went up 18-16 on a hammer from Mathew Ladyman to Jordan Taylor. With the score 19-17, Wind Chill addition Josh Poterack, recently signed from Iowa State University, would make the defensive play of the season. With his man racing deep, Poterack was a few steps behind, but he’d quickly make them up. Quickly catching his man, then jumping and reaching over him while tipping the disc away, never touching the offensive player. Making a play that looked totally impossible a few seconds earlier. Minnesota would give the disc back to Madison, who would quickly give it back to Minnesota. Unfortunately, Minnesota couldn’t capitalize and would again give the disc back to Madison who would score to make the score 19-18.

With Minnesota’s win and Indianapolis and Chicago’s loss, the Midwest Division playoff race is wide open. The Wind Chill take on Indianapolis on Saturday at Twin Cities Orthopedic Performance Center in Eagan. Discounted online tickets can be purchased online until Friday at midnight. BUY TICKETS HERE!