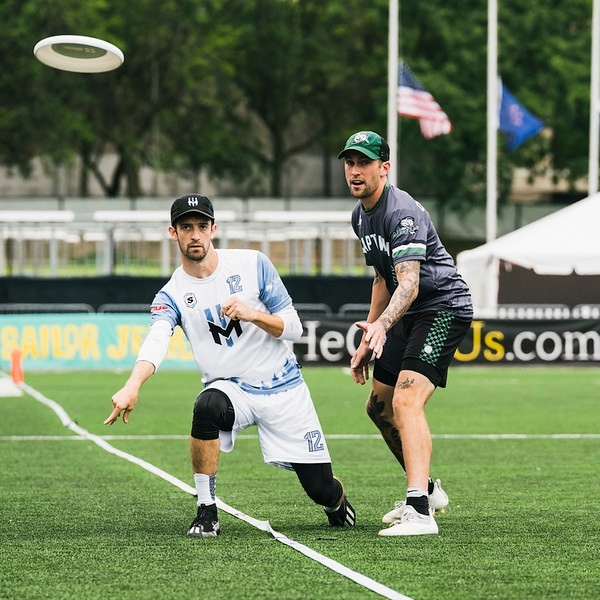 The Minnesota Wind Chill secured a home playoff game for the first time since 2017 in their 24 - 21 victory over the Indianapolis AlleyCats on Saturday.

Led by a swarm of authoritative defense and an offense that has begun to click again, Minnesota rebounded on the road from a Week 12 loss to Chicago, giving the team valuable momentum leading into the final week of the regular season.

The Indianapolis AlleyCats looked like a much better team than what Minnesota had faced at home a few weeks ago. Early in the game, the Cats kept up with the Chill, trading points and even securing a break point in the first quarter. Minnesota was able to push past, however, taking advantage of some key blocks from the defensive line.

The Wind Chill ran away with the game in the second quarter, racking up multiple break points and further cementing their dominance on both sides of the disc. Dylan DeClerck is one of Minnesota’s most flagstaff examples of offensive and defensive excellence this season. With 21 goals this year, DeClerck ranks third on the team’s most goals scored. He leads the team in blocks (19) and defensive points played this year (221). Against Indy last week, DeClerck added another goal and three more blocks to his stat sheet.

Andrew Roy also shone on Saturday, absolutely dominating the backfield in a near-perfect game. Roy has become a pillar playmaker for the Wind Chill, which was especially prevalent on Saturday through his season-high 742 throwing yards and just a single completion short of a perfect throwing game. The Wind Chill have been quieter on offense this season compared to the last few, but Roy’s young leadership role on the field shows some promise for the postseason and in years to come.

Finally, the Wind Chill record books were broken on Saturday. Bryan “BVon” Vohnoutka finished the game with three goals, pushing him forward as the club’s leader in career goals at 143.

“It's nice to be the all-time leading scorer in franchise history, especially taking it over from Strings who I have a ton of admiration and respect for,” Vohnoutka said after the game. “Although with the way Quinn is scoring goals I think my time at the top may not last too long!”

It took BVon longer than some may have expected to reach this milestone, given his past seasons’ performances. But after fighting through injuries and grinding toward a championship, he has focused on giving it his all on the field. As a leader on the team, Vohnoutka pointed to how he has adapted to a slightly altered role in 2022:

“I would be lying if I claimed I didn't know how many more goals I needed each game. That being said, it didn't really change the way I play. Some nights I'm scoring goals, other times it's tossing assists or playing defense. My job is to go out there and do everything I can to help us win.”

Vohnoutka now stands alone as the franchise’s top end-zone receiver, thanks to, as he joked, “hard work, natural athleticism, and well-throwing teammates!”

With the dub secured over the AlleyCats, the Wind Chill look to close out the regular season in front of the home crowd on Sunday, July 31 at 5:00 p.m. Then, they will shift their focus to the playoffs where they will host the franchise’s first home playoff game since 2017.