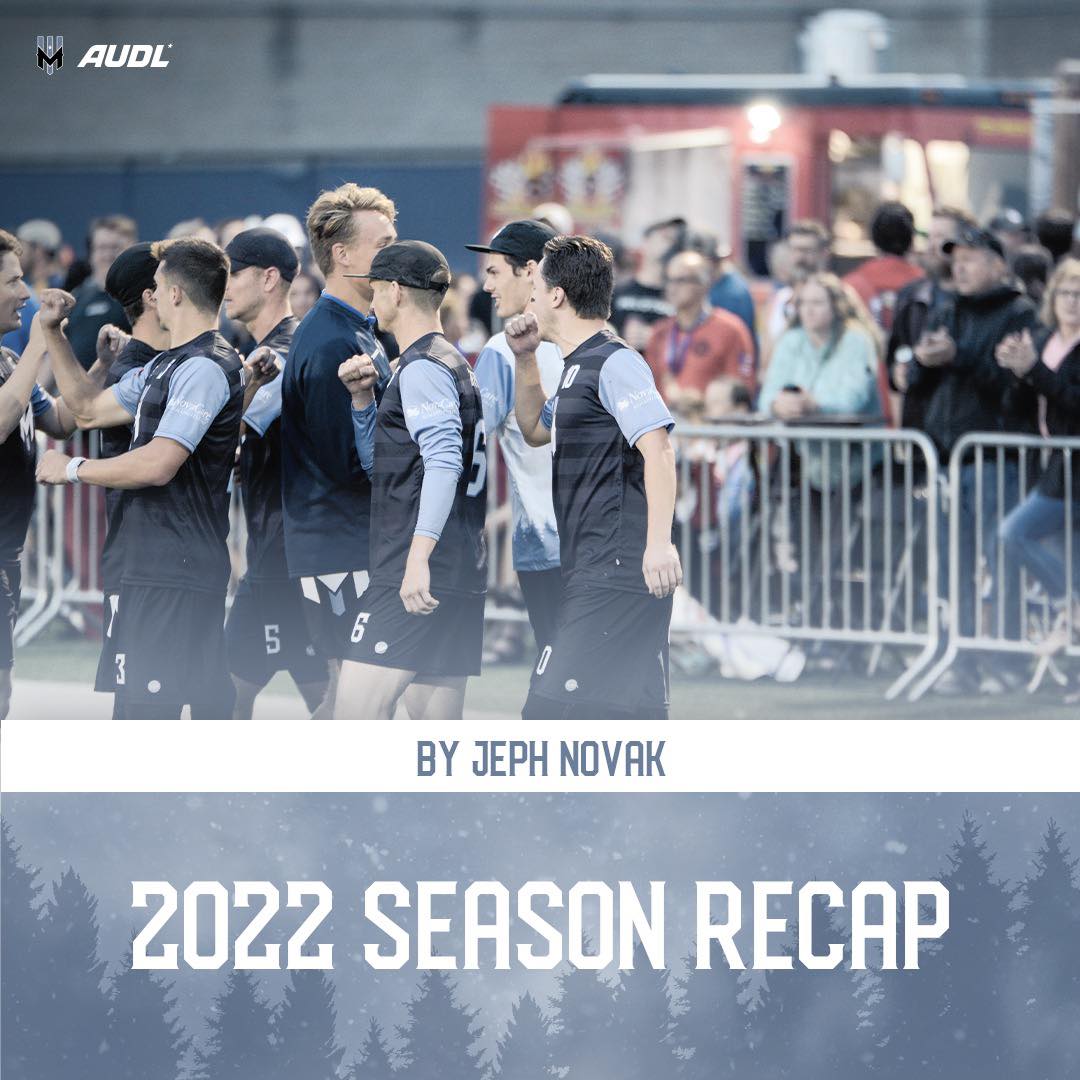 Chicago Remains at the Top

The Minnesota Wind Chill’s 2022 season ended how it began—with a tough loss to Chicago. While this may be an all-too-familiar sight, the sting is not quite as sharp, and the loss is perhaps not quite as significant compared to last year’s season finale.

The season ended in an almost full-circle, falling to this lineup that has been the bane of the Chill’s existence for the last two seasons. Leading up to the game, and really throughout the entire season, the Wind Chill prepared day in and day out for this matchup. From taking a huge road win against the Union in the middle of the season to studying film and preparing matchups, Minnesota diligently trained and prepared for the Central Division Championship rematch. Unfortunately, preparation does not always translate to on-field performance.

As the Wind Chill fought for the title of Division Champion in Chicago for their second year in a row, they found themselves digging into a deficit that quickly became impossible to climb out of.

Dylan DeClerck perhaps put it the simplest: “They had a good game, we had a bad game.”

Minnesota had one of their worst games at the worst time, tallying just 3 break points, the lowest they put up all season. They couldn’t hold onto the disc on offense or defense, completing just 91% of their passes — tied for the second fewest all year. Finally, the Wind Chill had a hold percentage of just 59%.

Ben Feldman was aware of the disappointing makeup of the game, echoing DeClerck’s sentiment: “Everyone was bummed. We got outplayed. We played one of our worst games in one of our key moments.”

Feldman noted, too, how this game very well could have gone differently if not for a few key components. One surprising aspect to the Wind Chill head coach was how strong the Union’s lineup turned out to be this year:

“We didn’t expect Chicago to be quite as profound as they were this year. They put together a Championship game-caliber lineup.”

The Chicago Union impressed at Championship Weekend in Madison, defeating the Colorado Summit 19-14 and advancing to the Championship game against the New York Empire.

Chicago’s impressive roster, combined with some of Minnesota’s defensive pillars battling season-ending injuries, made for misexecuted plays, under-producing defensive opportunities and an eventual 5-point loss to the Chicago Union.

Of course, a disappointing end does not wash away what was an extraordinary season. There is plenty to be proud of and excited for when reflecting upon the 2022 Wind Chill season, and the Wind Chill are on the doorstep of national recognition.

Just as Michael Jordan’s dynasty had to overcome a terrorizing team before becoming the dominating Chicago Bulls we know today, so too must the Wind Chill step up and take down the impeding Chicago Union. And in 2022, the team made major strides to do so. They unlocked a huge aspect of their gameplay that can propel the team to a Division title and eventually, a shot at the AUDL Championship. It all came in the form of an incredibly prolific defensive strategy.

The 2022 Wind Chill’s season was defined by one thing and one thing alone: defense. While historically their offense has been an impressive show of force and talent, Minnesota’s D-line was dominating on the field nearly every point. Feldman was admittedly surprised at how impressive the team’s defense turned out—especially considering their typical offensive success.

Despite the Wind Chill consistently providing some of the better defenders in the league, having one of the best defenses across all of the AUDL was an unexpected result. Throughout much of the 2022 season, the Minnesota Wind Chill held top slots in the main defensive categories. They finished with the third most blocks (158), behind only the Shred (172) and Empire (161). The Wind Chill absolutely thrived in converting on defense break chances in 2022, with a league-leading 36.09% of defensive points resulting in a goal for the Chill.

A large part of this success was how the team built their defense this season.

“Everybody was cruising, [we had the] right guys in the right situations,” said long-time defensive pillar, Dylan DeClerck. “We were doing everything that a good team does.”

Those “right guys” helped form a hybrid-esque, malleable roster that acted as a defensive line when the team didn’t have the disc, but could quickly switch to an offense-aligned machine on a turnover. Perhaps the best illustration of the Chill’s defense in action is through the free-agent signings of Abe Coffin and Sam Ward.

“[They were] very, very good,” said DeClerck of his new teammates. Coming from another division altogether, DeClerck noted how they weren’t quite sure just how good either of them were. But in the end, they exceeded the team’s expectations.

These two Dallas-turned-Minnesota teammates proved to be major pieces of the puzzle the Wind Chill are working to put together. While they did not necessarily play a lot of points on the same line, Coffin and Ward are perfect examples of just how well the team operated, and what pieces the Chill may be looking for in the coming years.

Coffin’s deep and hanging pulls were an underrated component to this Wind Chill defense—consistently forcing opposing offenses to start deep in their own territory with the defense already looming. In addition, his full-field throwing range allowed the team’s defensive line to be versatile in their offensive attack. Coffin managed 13 blocks and 20 assists as a Wind Chill defender this year. Coffin has traditionally been a more offensive-focused player, but that is exactly why he fit in so well with Minnesota’s defense this season. He added his offensive experience to a line who needed a more veteran playmaker to step up. His command of the disc on turnovers proved pivotal to the success of the team this season.

Ward’s specialties shined in his reset defense. His foot speed allowed the team to flex him in both handler and cutter defender roles where he provided constant, pestering pressure. With five blocks and nine goals with the Chill this year, he was a helpful addition to this defensive unit. By pairing him with teammates such as DeClerck, Linehan, Bergmeier, Ward filled in where he was needed and made a huge difference for the Chill this year.

Whether or not they were working the disc on the same line didn’t matter; Coffin and Ward were instrumental in getting the team break point after break point and absolutely shutting down opposing teams’ offenses. These two players were key pieces whose roles were clear-cut and paramount for Feldman and the Wind Chill.

But they weren’t the only reasons this 2022 Wind Chill team made the divisional championship round for a second year in a row.

Other Keys to Success

As the team continues to put the pieces together and work toward a dynasty of their own, they will likely need to use more players of Coffin’s and Ward’s caliber and hybrid skills. It makes sense, then, that the team is looking to players like Paul Krenik, Marty Adams, and Bret Bergmeier. Feldman was impressed at the season all three of these guys had in 2022, and is keenly aware of their talent on all sides of the disc.

“[Krenik has] a lot of potential,” said Feldman. “Most likely he’ll be an offensive player, but matchup-wise it makes sense to have him play defense at times too.”

Krenik played just about half his points on offense and half on defense in 2022, but clearly his impact was made on the Chill’s offensive line. With nine assists and 14 goals, Krenik found himself getting a lot of touches downfield and in the end zone. His skills complemented the talents of rookie Marty Adams, who has been described by teammates as a “release valve” for handlers facing pressure.

Bergmeier, too, stepped up this year. Especially compared to his 2021 campaign, he showed much improvement offensively, and had huge moments on defense. “[Bergmeier] earned his keep,” said Feldman. Bergmeier showed up big on the field in 2022, with big throws and big plays in big moments. The team will certainly look to retain his talent and keep this success going next year and beyond.

The Wind Chill’s entire makeup this year seemed to be built like these players, with flexibility and adaptability at the top of their minds. Over and over again throughout the season, the team relied on its defensive versatility to go on large runs that propelled them to big wins. This hybrid nature and ability to excel on an offensive or defensive point is so critical for future success and for the team to continue to establish themselves as a serious contender in the league.

If the Wind Chill want to continue their trajectory towards the AUDL’s elite, they need to of course take down the one team who has been the bane of their existence for multiple consecutive seasons: the Chicago Union. Fortunately for the Chill, they are making huge strides and putting the right pieces together. If they can find their rhythm on offense next year, and can maintain their prolific, flexible defense, then they will likely be seen as true contenders for the final four and get a coveted spot in Championship Weekend 2023.

The team is looking forward to the return of key injured players, including Jimmy Kittlesen, Rocco Linehan, Colin Berry, and hopefully even Nick Vogt. Offseason discussions and training have yet to begin, but the coaching staff always seems to have the Wind Chill on the mind.

As we enter yet another offseason, the Wind Chill will have some further considerations to make in order to establish and maintain their reputation as a dominating force in the AUDL. In the meantime, we will continue to watch Sea Foam Stadium highlights, bask in the glory of broken records and electric crowds, and will reminisce on the incredible summer that was the 2022 Wind Chill season.