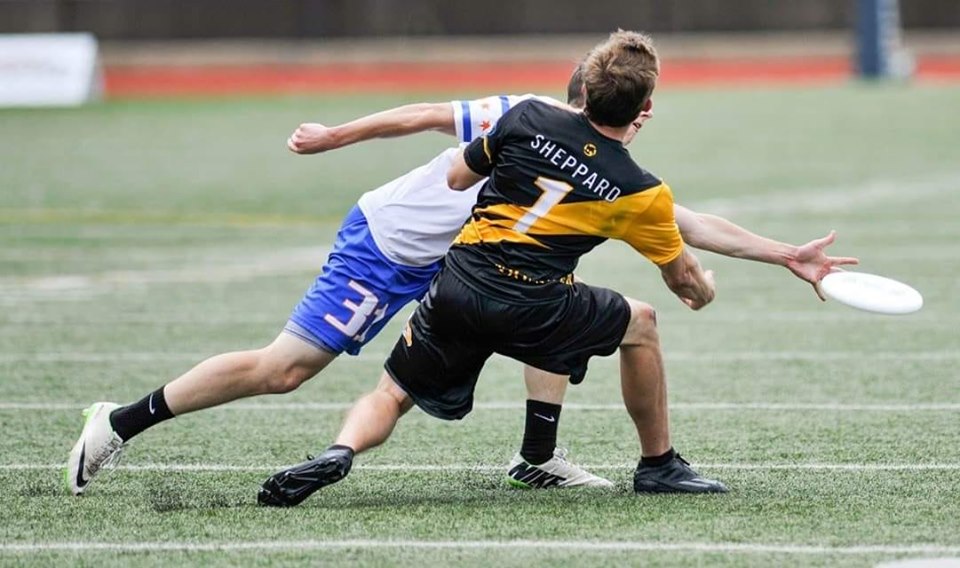 On Saturday, the Wildfire travelled to Pittsburgh to take on the Thunderbirds. Although Pittsburgh started the season 0-3, the return of Tyler DeGirolamo offered fresh hope. He has not been a mainstay player since 2015. To give some perspective of his on-field impact, in that season he stacked up 86 assists for a league record. In one game alone he threw 15 goals.

Saturday’s game opened to easy scoring from both offenses throughout the first half.

The Thunderbirds are experts at finding opportunities deep on the breakside. Their players are conditioned to curl deep-cuts into the empty space where their skilled throwers can drop hammers or blades. This makes it especially difficult for opposing defenders: just when you think you’ve shut down your matchup, he breaks away into unoccupied territory and runs onto an awaiting disc.

The Wildfire patiently found open swing options and connected deep when the opportunity arose. Matt Rehder showed that he’s as effective with the disc in his hands as he is catching goals deep. The Chicago visitors went into halftime with an 11-10 lead, poised to build on over the next 24 minutes of play. And then they hit an unredeemed sequence of mistakes.

To start the third quarter, it took the Wildfire 8 possessions for their first score. During that 5-point stretch, the offensive core remained on the field against fresh waves of Pittsburgh defenders who blanketed throwers with double teams and shut off downfield cutters. Routine plays became hard. Wildfire lost the effortless flow that earned them 26 and 23 points in their first two games.

An away game at Pittsburgh can often be the most physically grueling weekend of the season due to the time change and travel. Short sleep, road fatigue, hours of anxious anticipation, cramped legs: these are all small factors on their own but can combine to create physical and mental fatigue later in the game. Perhaps this was a factor. Or, perhaps this was simply the first time their offensive composure was tested.

A string of unforced errors can cause throwers to second-guess their instincts and systems. So, rather than hitting the first open cut, they look off options, leading to risky bailouts or stall turnovers. Errors beget errors. When Chicago eventually scored their first goal in the third quarter, only 3:38 remained on the clock and they had 3 points to make up.

The Wildfire were able to play even throughout the last quarter, but the deficit was too much to overcome. Pittsburgh prevailed 21-18.

Pawel Janas and Matt Rehder ended the day with 7 assists and 7 goals respectively. Seth Weaver and Drew Swanson both had a pair of blocks.

Going into the 2019 season, Wildfire’s leadership worked hard to gain greater buy-in from Chicagoland’s top talent. It’s scary how many potent options are available for any one position. For example, consider that Michael Pardo—who can legitimately make a run at the scoring title—is just one of several equally dangerous cutters available. He’s flanked by Rehder, Jack Shanahan and Jeff Weis who can all facilitate cutter-to-cutter flow.

But the question remains: what will that talent amount to? The team has struggled get the top of the roster on the field at the same time. With two consecutive home games coming up, Chicago will have an opportunity to stand to their full stature.

The Wildfire will host the Madison Radicals at Elmhurst College this Saturday at 6:00 PM Central.