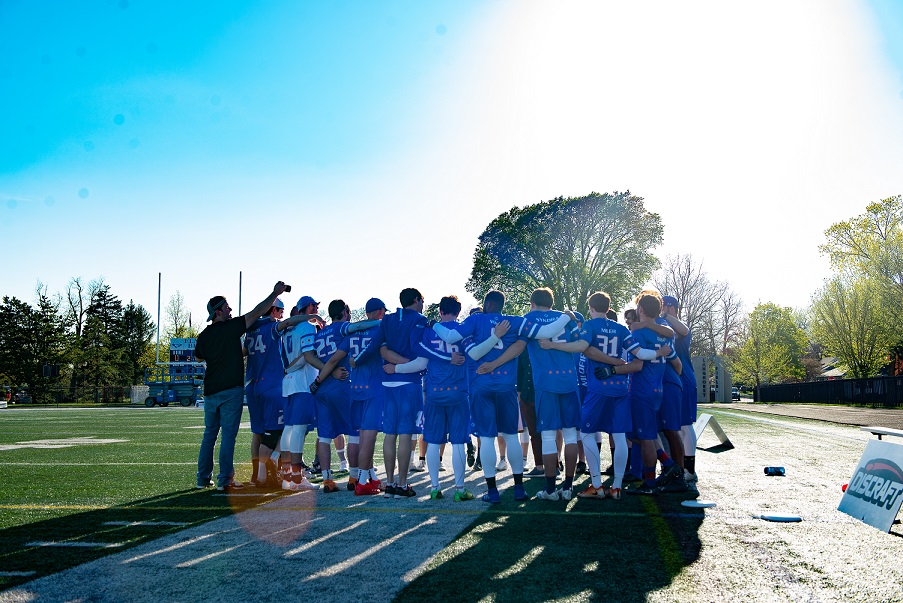 …and just like that another year is in the books.

An AUDL season in the Midwest contains extremes. Consider that teams often start practicing in the sub-freezing temps of January but finish their seasons in the brutal heat of July. And that’s just the weather.

Fans of the Midwest Division were treated to dramatic turns of fortune as some teams rocketed up the standings at various times while others tumbled down. Who could have guessed that the league’s defending champions would struggle at the bottom of the Division standings?

For Wildfire, the year was characterized by a successful period of program development. Chicago’s planning for 2019 began one year ago with Dave Woods matriculating to a head coach position and the onboarding of fresh captains Ross Barker and Tommy Gallagher. They joined returning captain Pawel Janas.

As soon as the group formed last September, they began their first task: assembling the best available talent. As Coach Woods put it, “the success of this season can be distilled down to one thing: the captains did an outstanding recruitment effort. I think people saw this multi-year thing that we’re building and want to be a part of it. They feel the energy.”

These efforts resulted in veteran pickups, such as Seattle transfers Matt Rehder and Zane Rankin, along with debutants who made a significant impact their first pro season. Meaningful contributions can come from unexpected places d part of Wildfire’s ethos was to place individuals in a position to maximize their abilities.

One important change in 2019 was a new social compact that started in the preseason. Less emphasis was placed on attendance requirements and the tradeoff was meritocratic rostering. On gameday, the best players suited-up.

As Ross put it, “we brand ourselves as a pro team, which means that our top players will see the field. The onus is on the individual to hit the gym and track between practices. Captains and Coach weren’t going to look over their shoulder to peek at a workout log. We trusted our guys to put in the effort on their own time between practices and games.” This ease of schedule alleviated some of the pressure of balancing careers, ultimate, and relationships, while also incentivizing performance.

The approach aligned with a larger push to foster a more competitive atmosphere during practices. Each week started with a fresh 25 players considered for the upcoming roster and each week those players would have to earn their spot at practice. “We definitely made roster decisions based on who brought intensity to practices, who was fired up,” said Ross.

“One of the downsides of fewer mandated practices and more out-of-town players is that it can be harder to get on the same page,” Pawel commented. But, Chicago was able to coalesce its talent and energy around a few on-field strategies.

The AUDL field is more than one acre of real estate. Offense can cut and throw to giant swaths of open space which makes defense a wholly different beast. Some teams have found success with zone, marking schemes, and double-teams intended to shrink the available space and temper offensive flow.

Wildfire employed a blend of person-to-person matchups, smart switching, and zone schemes. This, combined with an influx of hungry athletes, gave Chicago a balanced set of challenges for their Midwest rivals. “We discovered the impact that a high-quality D line can have on results,” commented Coach Woods. “When you can consistently generate blocks and conversions, it alleviates pressure on your offensive squad to be perfect.”

A part of this evolution involved Ross’s transition from offensive cutter to the D line. Not only did he add some firepower when possessing the disc, but he was crucial in designing defenses and game-planning for opponents. Said Woods, “Ross was a big help in our strategic development. Some novel defensive strategies paid off, especially early in the season when opponents weren’t prepared.”

Chicago put their athletes in a position to make big plays and the numbers speak for themselves. Rookie Drew Swanson ended the season 4th across the entire AUDL in blocks with 24. Matt Rehder tied for 10th in the league with 17 blocks.

In 2019, Chicago marked steady progress on its long term trendline. The team improved to .538 from .357 the year prior made a return to the playoffs for the first time since 2015. But, most importantly, it met the one overarching goal for the year: make Wildfire a joyful experience.

Following the playoff exit in July, Wildfire’s players thanked each other for the shared journey and then dispersed like objects loosed in space, each to his own vector. It’s what ultimate players do after a hard-fought season reaches conclusion.

Pawel flew to Poland. Coach Woods ran his first triathlon. Other folks spent the end of summer on vacations, prepping for the school year, or jumping right back into ultimate with the club season.

But slowly, over the course of the next few months, these disparate objects in space will be drawn back together. Because that’s also what ultimate players do. They will begin circling each other in tighter and tighter orbits; building momentum for the long journey to Championship Weekend.