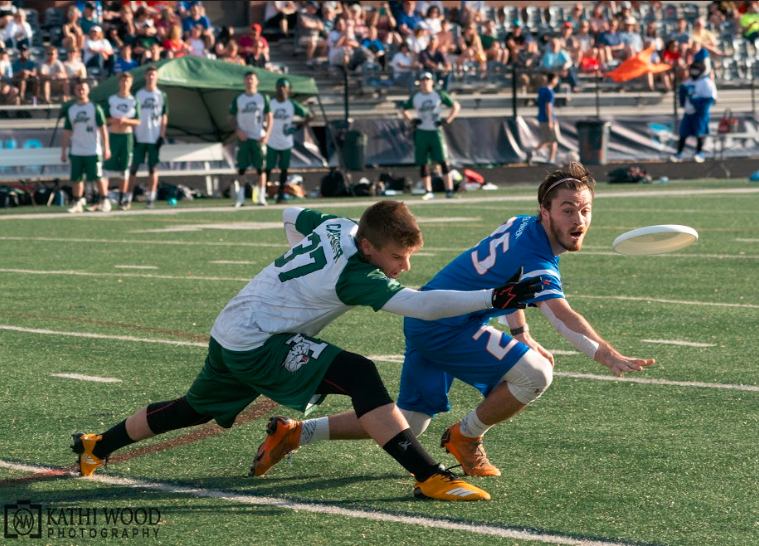 Wildfire’s offense has proven, in various moments in the 2019 season, that it’s a wholly more powerful engine than anything we’ve seen in recent years. Wildfire’s defense made their own declaration of might in an 18-17 win against the Indianapolis Alleycats on Saturday. Within an AUDL-sized field, most defenses consider a measure of success to approximate “slowing the offense” or “creating long points.” But, on Saturday, Wildfire earned outright blocks. Eleven different players recorded at least one takeaway and throughout the evening Chicago did plenty of things that don’t show up on a stat sheet: limiting the field space with solid positioning, forcing difficult resets, and deflating cutters with team defense.

The Alleycats traditionally play a fast-paced offense that creates 1v1 situations and puts defenders on an island. Vast field space and precise throwers allow their cutters to capitalize on any athletic mismatch or poor positioning. Wildfire mitigated this in several ways. First, downfield defenders dictated options through efficient switching and help defense. Then, Chicago blanketed Indy’s handlers, which forced throwers to look to the dump earlier in the stall count than they typically would. This formed a virtuous cycle where fatigued Alleycats made one dry cut after another.

Chicago’s success was particularly meaningful as this was nomad Brett Matzuka’s inaugural game against the Wildfire. Coach Dave Woods framed the situation:

“We knew what to expect of Matzuka because of his history playing for both Wildfire and Machine. But, just because you identify a problem, it doesn’t mean it’s easy to solve. He hangs around the disc, gets a lot of touches and places the disc wherever he wants. And the guy never seems to get tired.”

“I was impressed with the way Jason Vallee face-guarded him and kept the disc out of his hands. He’s a lock-up guy,” noted Woods.

Although several individuals had big games, Coach Woods credited the strength of Chicago’s deep roster. “We broke them early and kept the pressure up throughout the night,” he said. “Both of our D lines were successful in their objectives which allowed us to distribute points more evenly and gave us a boost of energy down the stretch.”

While Wildfire’s defense was flustering the Alleycats and converting turnovers to breaks, Chicago’s offense was dicing up the field with big gainers and hucks. Their first three scores involved aggressive rips, which set the tone for the remainder of the game. When Wildfire’s offense moves the disc quickly, they are deadly and deep strikes can come from a number of different player combinations.

This looked like Chicago’s most complete game of the season. It’s exactly what leadership wants to see going into the runup to the playoffs.

Chicago travels to Minnesota next weekend to face the Wind Chill in what will be a much-anticipated match as the Midwest division remains all knotted up. Live stream the game at https://www.audl.tv