History of the Chicago Wildfire | AUDL
Skip to main content

In 2012, Steve Gordon purchased the franchise rights to bring professional ultimate to Chicago area as part of the newly formed American Ultimate Disc League. The AUDL debuted in 2012 with 8 teams across the country and looked to expand to another 8 markets heading into 2013. Gordon would also become commissioner of the league starting in 2012.

Founded on a respect for the unique “Integrity Rule” - a rule that relies on players overturning a missed call based on their honest account of the play - Gordon fell in love with the heart of the sport and saw the potential in establishing a professional team in a city full of talented collegiate and club athletes.

“I looked at something like 400 names, the majority of which were taken or weren’t very good,” Gordon said. “I was not a soccer fan, I wasn’t from Chicago but I came across the Chicago Fire for our name. Not too long after using that name I got a call from the MLS Chicago Fire who said that wasn’t a good idea and I said no problem, didn’t know the name was taken. Migrating to Wildfire kept the connection to the Great Chicago Fire and allowed me to use orange and blue like the Bears and [University of] Illinois.” 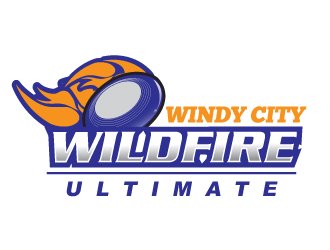 The Windy City Wildfire took the field in 2013 with a rockstar core of players including 2012 MVP Jonathan “Goose” Helton, AJ Nelson, Bob Liu, Geoff Serednesky, and Brodie Smith. The team benefited from the chemistry of local Chicago Machine players and the experience of players who competed in the AUDL’s inaugural season the year prior. 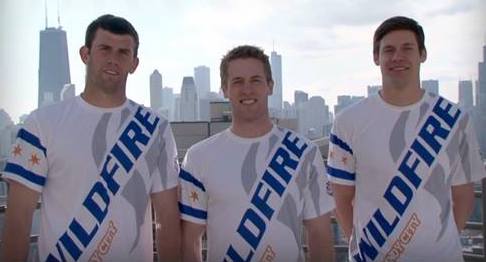 The team was “Bringin’ the Heat” in their first season, winning the Midwest division regular season title with a 14-2 record. AUDL Championship Weekend II took place in Chicago but it was the Madison Radicals who walked away with the Division Championship. That did not stop the Wildfire from improving heading into the next season.

In 2014, the team switched from the Windy City Wildfire to Chicago Wildfire to more directly honor the city the team called home. The same core returned along with more talent from the local club scene. Helton earned MVP honors for a second time in 2013 and looked to lead the team further into the playoffs than last season’s upset. The 2014 team finished the season at 9-5 and ultimately fell in the first round of the playoffs again, this time to New York. 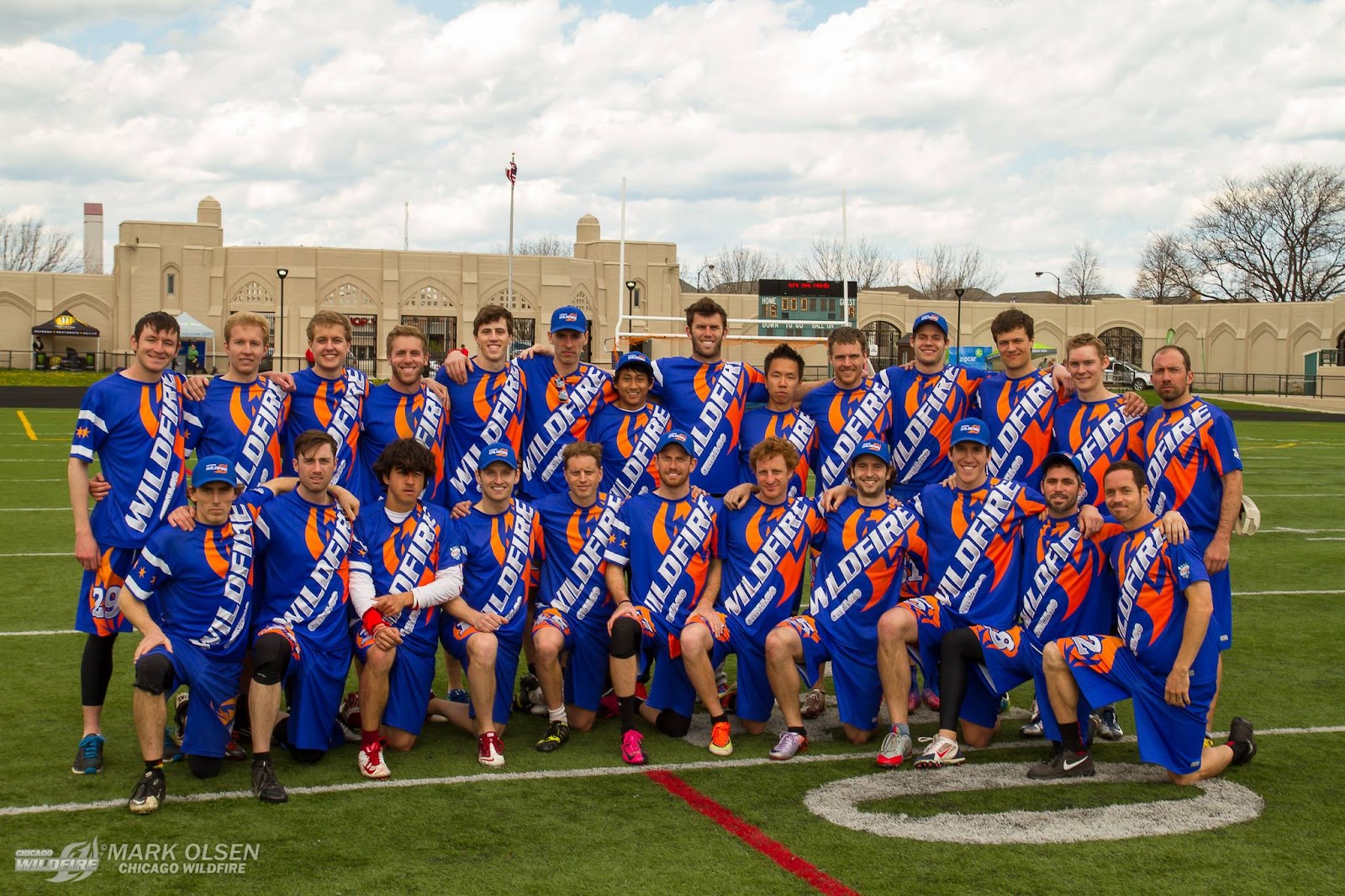 The 2015 Chicago Wildfire had one last run at greatness. Chris Ashbrook joined as the new head coach. The core of Goose, Liu, Brodie, and Nelson all returned with AUDL veteran Brett Matzuka joining the squad, and a slew of future legends putting on their blues for the first time including Adrian King, Alex Rummelhart, Danny Miller, and Dan Vockeroth. Tim Fergus also began his full time service for the Wildfire after playing a single game for the 2014 roster.

The team finished 8-5-1 and earned their third straight playoff bid. They faced off against the Pittsburgh Thunderbirds, one of nine new teams in the league, in a postseason play-in game but fell 24-23 in overtime.

During the offseason Goose, Liu, and Matzuka - who earned a spot on the all AUDL first team that season - left to play for the DC Breeze. Cullen Geppert retired and Brodie Smith left for Dallas, thus ending the reign of the original core.

The 2016 team needed new players to fill the void and step up to create a new look for the Wildfire. Dave Woods, Jeff Robinson, Jimmy Sykora, Nick Zeman, Michael Pardo, and Charlie Furse all took the field for the first time that year. Despite maintaining AJ Nelson, the team fell to a record of 4-10 and missed the playoffs for the first time since the team’s inception.

The 2017 roster continued facing many of the same on field struggles. Adrian King stepped into the role of head coach and AJ Nelson transitioned from player to assistant coach. The team added Trent Kuhl as General Manager and signed now owner CJ O’Brien after his first season with the Cincinnati Revolution. The team saw debut years from standouts Pawel Janas, Ross Barker, Tommy Gallagher, and Jeff Weis. Despite finishing the season at just 3-11, the future looked bright for a young core of talent on the Wildfire. 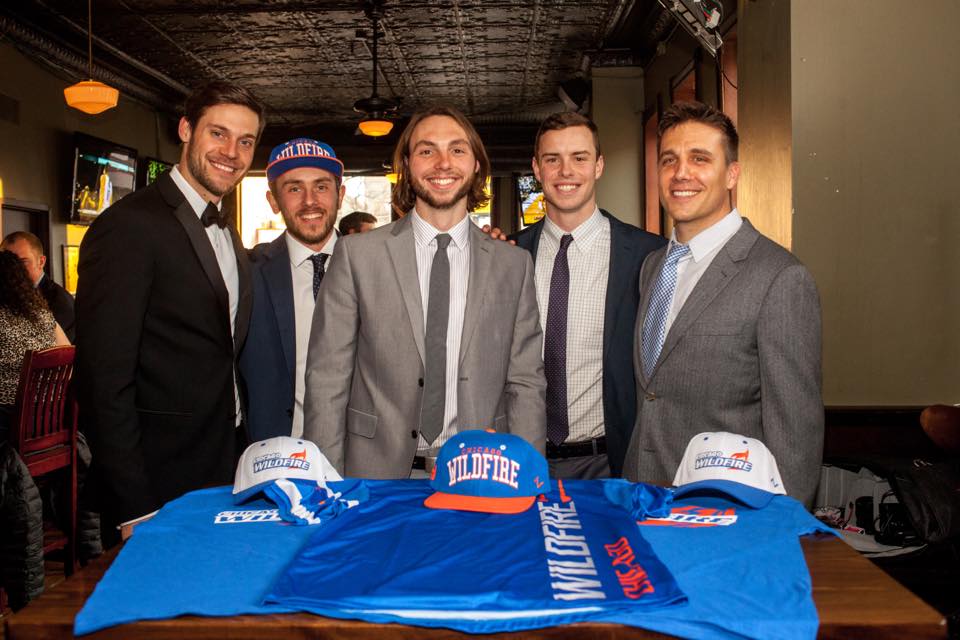 Hard work and an increasingly talented roster helped the 2018 Wildfire to get to a 5-9 record. Adrian King returned as head coach and the team added veteran Kurt Gibson and newcomers Nate Goff, Jeremy Burril, and Jason Vallee. 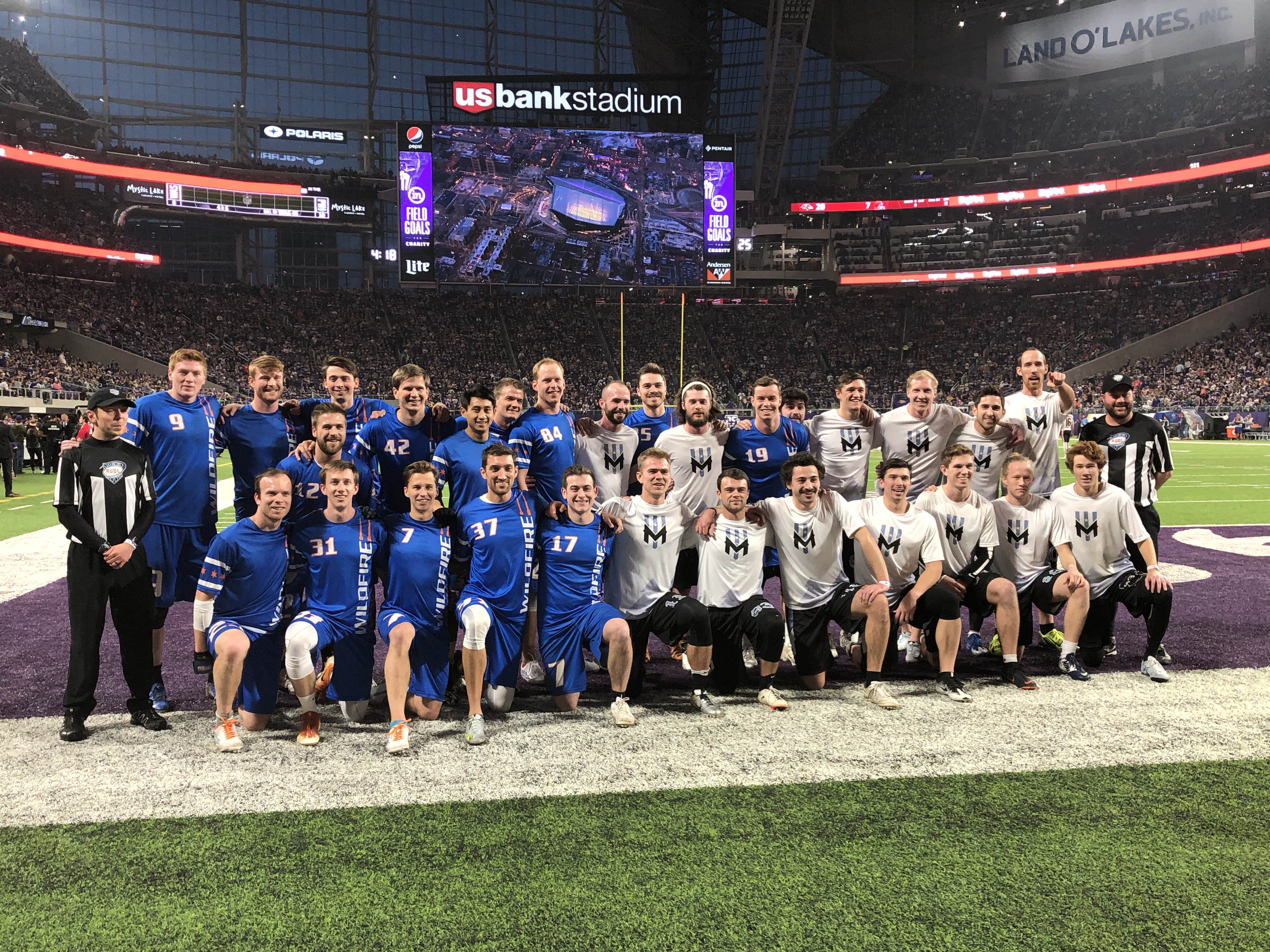 In 2019 the Wildfire took the field determined to succeed. Dave Woods took over for Adrian King as head coach. Many of the new core of players had a season or two of AUDL experience under their belt and a handful of former Wildfire players rejoined the team including Fergus, Zubair Abdulla, and Von Alanguilan. Also joining the mix from the Seattle Cascade was Matt Rehder, a massive upgrade on the field to pair with the chemistry of Pardo and Janas. The Wildfire also signed a group of rockstar rookies like Seth Weaver, Jack Shanahan, and Drew Swanson.

Behind all of that energy and a record breaking season for assists by Janas, the 2019 Wildfire finished at 7-5 and earned their first playoff bid since 2015. Unfortunately, once again, the team fell just one goal short to Pittsburgh losing 21-20 and failed to advance to the Division Championship.

During the offseason the last remaining member of the original 2013 roster, Michael “Slymer” Egan, retired from the AUDL. Slymer is the only player to have participated in every season of the Wildfire’s history, after the 2020 season had to be cancelled due to the coronavirus pandemic. 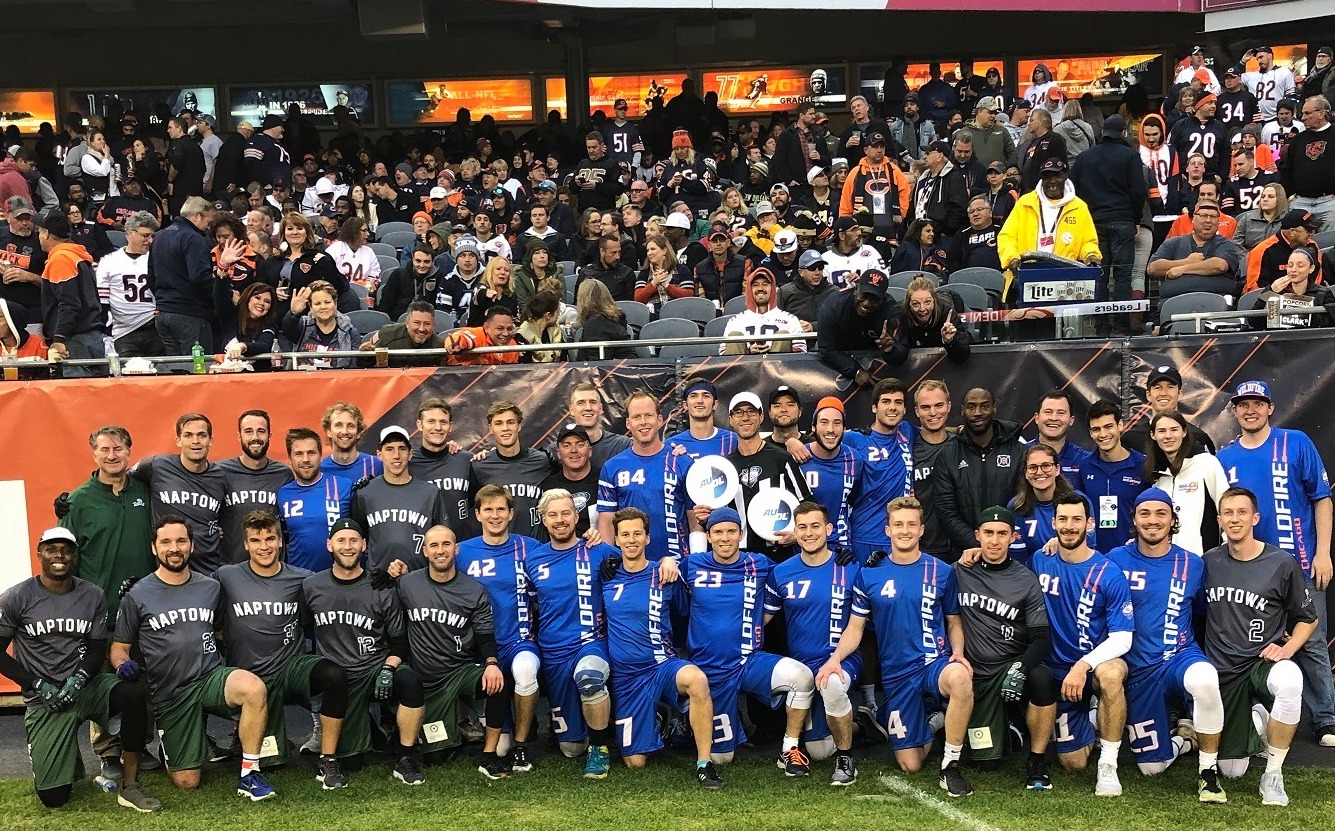 The 2020 season was set to be another solid year for the Wildfire. Another handful of hopeful rookies joined the team looking to fill the holes that Pardo, who retired, and Rehder, who left for the Minnesota Wind Chill, left. Just weeks before the season was set to start, the league decided to postpone and ultimately cancel the season. This would be the end of the Wildfire era, after 7 years.

There was nothing that could come close to the energy and fun associated with attending an AUDL game. The Wildfire, under Steve Gordon and later CJ O’Brien, always took the fan experience seriously and would get to every game hours early to set up the field and get everything ready for a night or afternoon of fun. Not many other sports see the owner of the franchise running on the field setting up pylons, sponsorship banners, or running youth clinics during halftimes. That is what ultimate frisbee is all about. 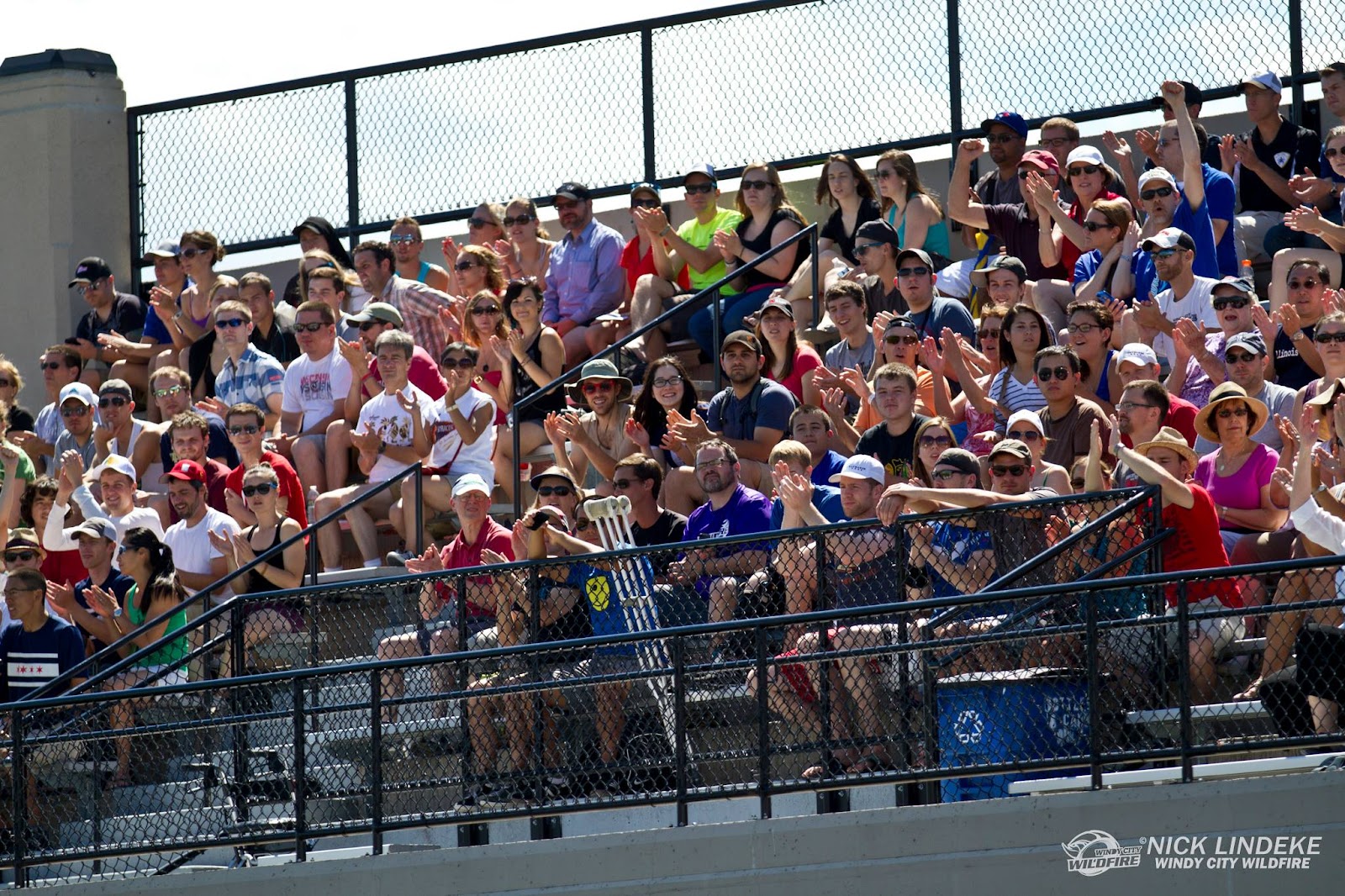 “We were in a city full of such great sports teams. It was the perfect setting to add our team to the mix. We saw hundreds of people come out for games. I loved every second of it. Those were the happiest moments of my time with the Wildfire. Ultimate fits the party,” Gordon said.

Gordon recalled many memories of the heart of the sport shining through, from many road trips building lifelong friendships with the players, to moments on the field that would give anyone goosebumps, and the joy of helping grow the sport with local schools and youth clinics.

As we transition to a new era for Chicago professional ultimate, it is the true values behind the Wildfire that will always be present in everything we do as an organization. Game days will still feel special, you’ll still be able to meet the players, participate in our youth clinics, and take part in all of the fun games throughout the night.

This is an opportunity for us to build towards a new generation of ultimate in our city. We want to reach new fans all across the Chicagoland area and beyond to introduce them to the sport we love. We might not know for sure the next time we can all be together at Langhorst Field watching the opening pull, but we do know when the time comes we will all enjoy the party!