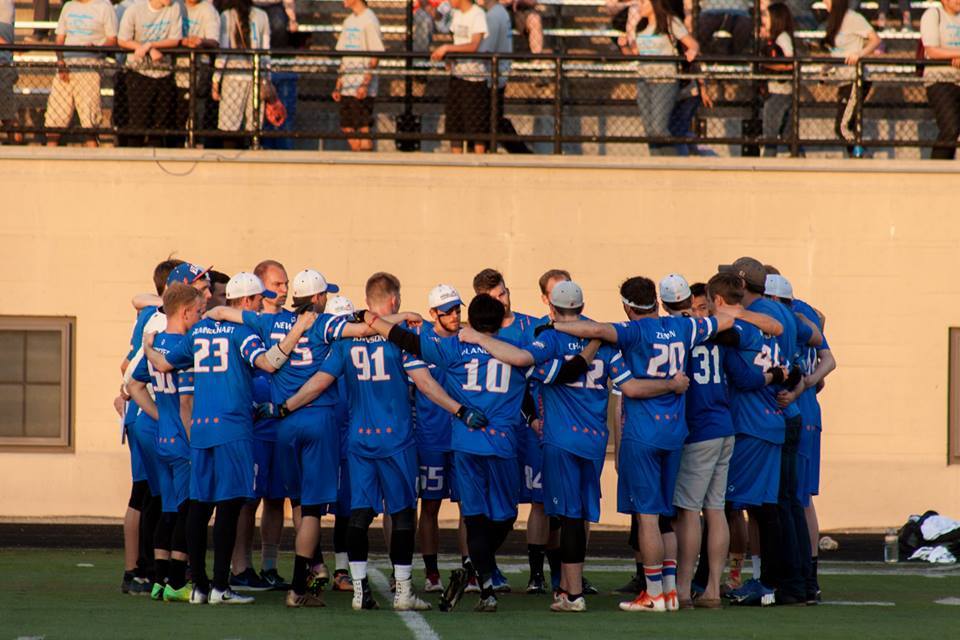 This past weekend the Wildfire embarked on a journey to the lower Midwest for the Kansas City Ultimate Showcase Weekend, a tournament designed to give the city a taste of professional-level men’s and women’s Ultimate. Three AUDL teams converged on Kansas City for a small round-robin-style tournament. The Indianapolis AlleyCats, Nashville NightWatch, and Chicago Wildfire all brought teams, and Kansas City created a team filled with their top talent.

The Wildfire traveled through the night Friday through snow and rain on the Wild Wagon (@WildfireBus) to watch the sunrise over Kansas City. Stepping off the bus, the Wildfire’s goals for the weekend focused on development, specifically on-field chemistry and team bonding.

The first matchups of the weekend pitted Nashville against Kansas City and a divisional rivalry between the Indianapolis AlleyCats and the Chicago Wildfire. The weather certainly played a factor during the first games on Saturday. Cold temperatures and windy conditions made it difficult for teams to establish consistent flow on offense. Fortunately, the Wildfire outdoor practices in Chicago provided similar conditions in the early preseason, and the experience showed. When time ran out after the fourth quarter, the Wildfire had bested the 'Cats 16-12. On the other field, Kansas City clinched a close win over the Nightwatch 12-11.

A game against the Nashville Nightwatch offered the Wildfire an opportunity for inter-divisional play. Nashville’s quick handlers with big throws continued to catch the Wildfire off guard, frequently challenging the handler and deep defenders. Ultimately, a more well-rounded roster proved to be a deciding factor.

“Whereas Nashville relied on a few key players, we appeared to be a much deeper team. In general, our throws were stronger throughout our entire roster,” Wildfire Coach Adrian King said. The Wildfire were able to string together a few sets of breaks to find themselves victorious over the Nightwatch 17-15. The other side of the bracket saw Indy over KC 14-10.

The Saturday night lights shone bright on a spirited matchup between Kansas City and the Wildfire, and the livestreamed game displayed big highlights from both teams. An efficient Wildfire offense and gritty defense proved difficult for KC to beat. After the hard-fought final game Saturday, the Wildfire were able to secure a 23-16 victory over Kansas City and remain unbeaten on the day.

Meanwhile, Nashville defeated Indy on a buzzer-beater hammer for a 14-13 win.

Back at the hotel, the Wildfire celebrated their 3-0 day with Joe’s Kansas City Bar-B-Que. The world has never seen a more savage inhalation of pulled pork and brisket.

Saturday’s games resulted in the Wildfire on top and a three-way tie for second place, which caused reseeding to be determined by point differentials. Sunday morning presented a second matchup of the Wildfire versus KC, and Indy against Nashville.

After a few early Wildfire breaks, Kansas City fought back with a vengeance, working the game back to a tie at 14-14 with only minutes left in the game. Despite opportunities to win on big plays from both teams, time in the fourth quarter ran out at 15-15, sending the game to a 5-minute overtime. The two teams traded points until the Wildfire finally clinched a break. In what was an exciting game up until the end, Kansas City came close to tying in the final seconds, but the Wildfire held them off for a close 18-17 win.

Coach King was impressed by the Kansas City men’s team, saying, “They played with confidence and didn’t hesitate to take their shots. I enjoyed the fire they brought on the field and sidelines.”

Despite earning their place in the championship game, the Wildfire had incurred too many injuries throughout the weekend to justify further competition. The Wildfire opted out of the last game in order to keep their remaining players healthy going into the beginning of the AUDL season.

Overall, Coach King was very satisfied with the Wildfire’s weekend. “Generally, we accomplished our goals, which were bonding, getting good experience, and making some memories. It was a good introduction to the AUDL-style of play for our rookies,” he said. King was also impressed with how well the Kansas City Ultimate Showcase Weekend was run, stating, “The tournament organizers dealt with all the different variables normally associated with a tourney, plus the logistics of a foreign set of rules, odd field size, and refs. I was impressed with their planning, communication, and execution. I would consider doing this again in future years.”

The team, however, was still unsatisfied and celebrated their undefeated weekend further with more Kansas City barbecue, this time at the famous Gates Bar-B-Q.

The Wildfire are excited with the preseason reps and have a positive outlook going into the 2018 AUDL season. Catch the Wildfire’s season opener on April 14 when they head on the road to take on the Pittsburgh Thunderbirds.