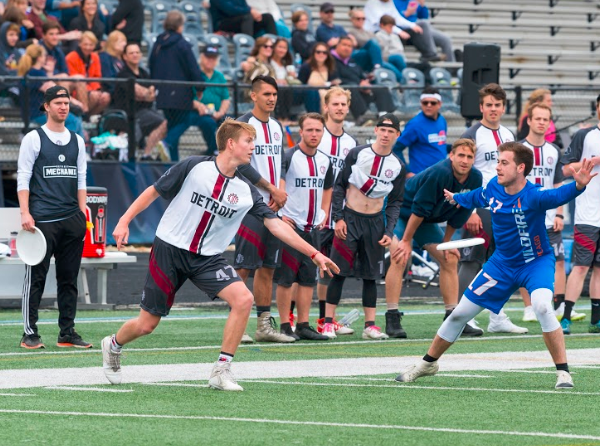 In a game that played out according to expectations, Wildfire beat the Mechanix in Detroit. This was the second game of a back-to-back series.

The Mechanix scored easily on the opening possession, but that would not be predictive of the rest of the evening. Wildfire’s defense would only allow one more hold in the first quarter as they stacked up break after break. The Chicago defense continued to stifle Detroit’s attacks in the first half by blanketing cutters and forcing handlers into difficult throwing situations.

In the second half, Detroit did rattle off some solid scores, but they were more palliative than threatening. Wildfire would go on to win 24-11 in a game that didn’t even feel as close as that lopsided score would indicate.

While this was an easy victory, it was not effortless and certainly not a wasted opportunity to grow. Great teams utilize every game—no matter how wide the win/loss margin—to sharpen their strategy. Coach Dave Woods and the captains used this as a sandbox environment: testing different defensive schemes and roster combinations against quality opponents. On offense, they experimented with roles, allowing players to get quality reps in a meaningful situation.

Although the game-planning was different than it would have been against Indianapolis or the Wind Chill, leadership demanded a high level of execution and effort. Coach Woods commented, “We respect every opponent that we face. And, we do that by playing to our established standards regardless of who that is.” This mentality was evident in Wildfire’s hustle and throw choices; players took measured risks with the disc while stretching their boundaries.

Wildfire gained more than just another W in their win/loss category; they had an opportunity to bond aboard the trusty Wildfire bus. Captain Ross Barker said, “It was definitely a fun road trip that boosted camaraderie. Any time you have an opportunity to create some new stories and dumb inside jokes, it contributes to the long-term vision.”

The win pushed Chicago into a two-way tie for second place in the Midwest standings. Next weekend, Chicago will travel north to challenge a vulnerable Madison squad. With the chaos happening in the Midwest, every game is crucial. Beating the Radicals would edge Madison out of the playoffs while avenging their long-term dominance in the region.

Watch all Wildfire games streaming or on demand at https://www.audl.tv/