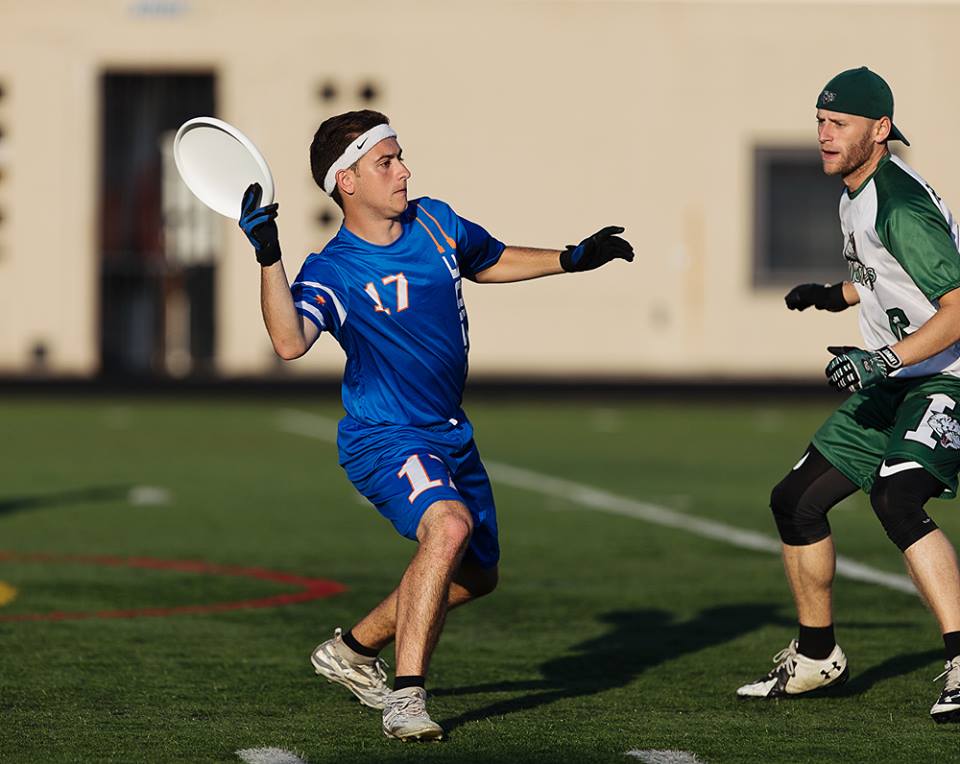 In the 2018 season Tommy threw 5 assists and caught 10 goals. These numbers may seem pedestrian until one considers he only played half the season (joining Wildfire after wrapping up the Hodags’ run to the College National Championships). In those seven AUDL games he maintained an astounding 98.6% completion rate on throws (2nd best in the league). This was a virtual repeat of his 2017 season, when he joined an established Wildfire offense midway through the season and made immediate contributions.

Examining Tommy’s game under a microscope reveals a level of consistency typically found only in veteran players. A pattern emerges. He leverages a repository of fundamental skills gained through years of high school, elite college, club and AUDL experience. His skillset is fungible, allowing him to move fluidly among different player combinations and succeed in whatever role he fills.

In 2019 he aims to strengthen these qualities, not only as an axis in the offensive schema, but also in his new role of captain.

I'm a pretty big soccer fan. I played soccer since I was about 6 and still spend a lot of time following the major leagues and watching games when possible. I have always had a soft spot for Manchester City, especially since they began their climb toward the top of the Premier League when I first started following the watching professional soccer regularly. The USMNT is a bit of a sore subject for me after missing the World Cup but I'm optimistic that the younger core of players that are forming will see success internationally in the next few cycles.

What good books have you read recently? Or, what ideas excite you outside of ultimate?

I recently got a job in the Willis Tower. Since I'm still living in the suburbs, I've had a lot of time commuting to catch up on some reading that I've been meaning to do. I've been working on reading some of the high school classics that I somehow missed. I really enjoyed 1984 and am currently working on Animal Farm. In terms of my favorite series, I crushed A Song of Ice and Fire when I was in college and am stoked to see the last season of Game of Thrones (though the two storylines have some pretty serious differences.)

As a player I often pinball between states of calm, intense focus, and emotionally charged, raw energy. Trying to navigate the relation between these two performance states -- and finding the right balance for myself and my teammates pursuant to the moment I am in -- is one of the biggest challenges I regularly need to encounter on the field.

What do you do to find success on the field? What's your comparative advantage or best attribute?

I have always seen myself as a facilitator on the field; I like to position myself to receive the ball and look to move it decisively and incisively to a teammate in an advantageous position. I believe that I am able to compete at a high level not necessarily because of my athleticism but rather my ability to read the field, know the tendencies of my teammates and identify those of opponents, and anticipate the run of play and react proactively to put myself in the best position possible.

How did you become the player you are today? What were the formative moments in your career?

I owe a lot of my development as a player to a series of incredibly knowledgeable, talented, passionate coaches. I began playing in high school my freshman year when my older brother dragged me to tryouts despite my assertions that "frisbee isn't a sport." I went on to play all four years while in high school, captaining for two years and was named to the Illinois All-State team three times. During those years, I played in (and lost) three consecutive Illinois State Championship games. In the summers of those years, I was able to represent Chicago at the Youth Club Championships along with a handful of other guys who are also now on the Wildfire, Jesse White and Jack Shanahan.

The next major milestone in my ultimate career was making the Hodags as a freshman in 2013. I was, fortunately or unfortunately, the only freshman that the Hodags took that year. During my time as a Hodag, I attended College Nationals all 5 years, falling four times in the quarterfinals. I was a part of the leadership my Senior year and captained in my fifth year. I played my first year in the AUDL with the Wildfire  following my Senior year in college in 2018.

What advice would you give a younger player just starting out in their career?

The past four years I had the opportunity to coach the Illinois Youth Ultimate u17 YCC team and, like I have told many of those players, developing fundamental skills early on in your playing career is essential if you want to continue to grow as a player. The easiest way to see significant gains as a newer player is by touching a disc as often as possible. Vary the speed, release point, distance of your throws, which will expand your arsenal and lead to greater effectiveness. Beyond developing these fundamental throwing skills, young players should watch as much Ultimate as possible. Watching games is incredibly entertaining. But watching intelligently, expands your understanding of team-level strategies. My quick tip: find a game between two good teams. View it once and just soak it in. Enjoy the narrative of the game. Then, go back, and prior to every pull, pick one player to focus on and watch that player throughout the point. Try and identify what they are doing well and what that player struggled with. Developing the ability to intelligently critique someone’s play allows you to intelligently critique your own in a productive manner.

Who were some of your mentors?

Early on Tony Miocic, my high school coach, was instrumental in developing my passion for and understanding of the game. As I continued to grow as a person and a player, I had the opportunity to play with a series of incredibly hard-working, talented, and passionate players on the Hodags. These guys: Colin Camp, Ben Rehman, Ross Barker, Craig Cox, Avery Johnson, Nick Vogt, David Yu, Eric Van Kampen, and more, pushed me to my physical and mental limits and helped me continue to grow as a player and as a person. Without teammates like these, I wouldn't be the player that I am today and for that I'm incredibly grateful.

Another individual that helped shaped my trajectory as a player was longtime Hodag coach Hector Valdivia (AKA Hh). Hh is profoundly intelligent. He parallels everyday challenges to those found on the Ultimate field and teaches methods to identify and respond productively. Late in my career on the Hodags, Hh lent me a book, The Art of Learning by chess and tai chi world champion Joshua Waitzkin that helped me gain a deeper understanding of mental strength, learning, training, and developing my own path toward a flexible performance mindset.

What are some specific skills you're working on to become a better player or leader?

On the field, I continue to develop my own range as a thrower to expand my ability to consistently and confidently deliver passes in varying situations. As a captain, I am working on becoming a more effective communicator, my ability to identify the particular communicative and emotional needs of my individual teammates, and remaining flexible yet resolute in the face of adversity.