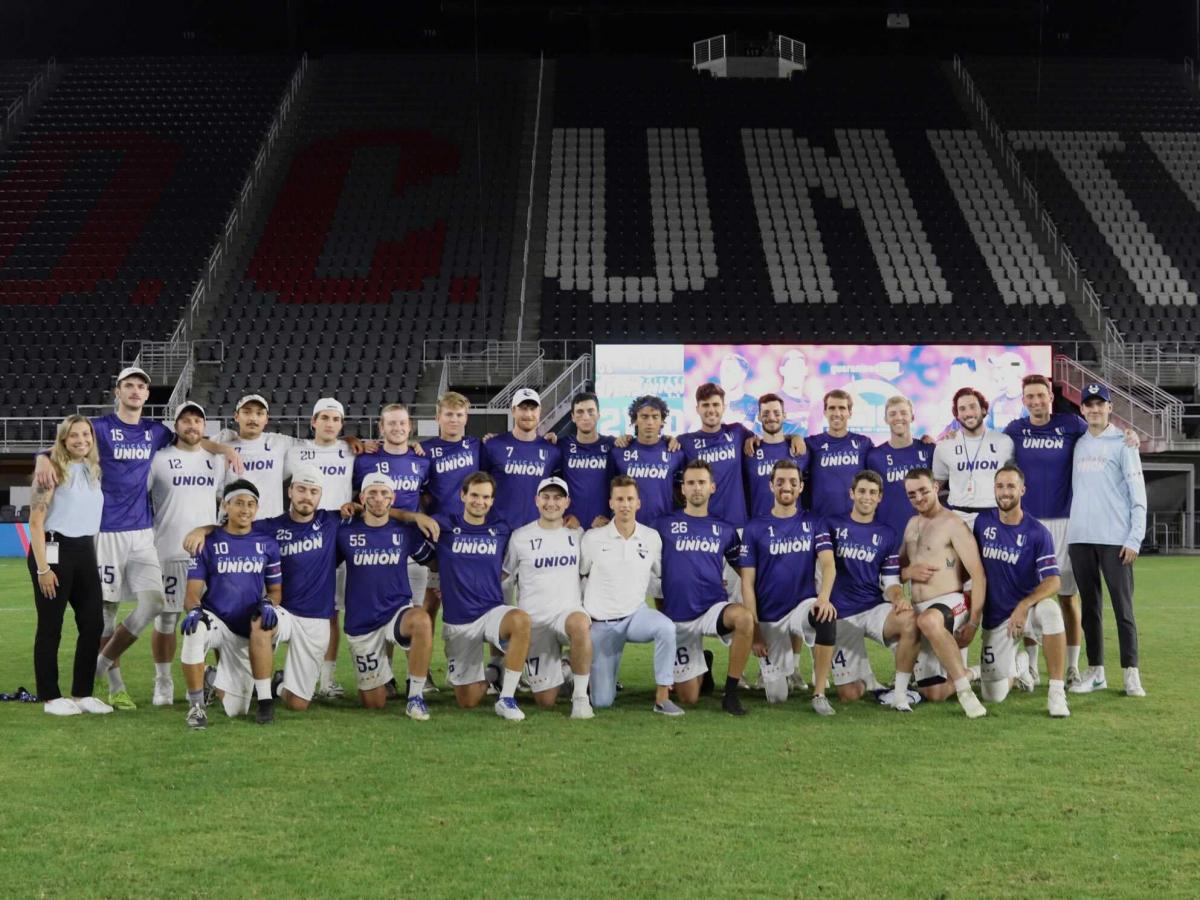 On Friday, September 10, Chicago Union faced off against the Raleigh Flyers in the semi-final game at AUDI Field in Washington, DC during Championship Weekend 10. The weekend included pre-game press conferences, an electric crowd, and getting the chance to play on a professional soccer pitch.

“Championship Weekend 10 was unlike any other ultimate experience. Staying in downtown DC in a hotel with the other three teams overlooking the MLS/NWSL stadium where we played was surreal. The anticipation and high stakes among the players and staff involved were palpable. Walking up the stairs of the stadium to see the lights and jumbotron on the field set the tone that this was not an ordinary AUDL game. After our game, getting to celebrate and commiserate seasons with other players and coaches from across the country was truly special,” said Dave Woods, Chicago Union Coach.

The matchup between Chicago and Raleigh was the first of its kind but nothing short of a rivalry connection. Seth Weaver from the Flyers was no stranger to his opponents as he played the 2019 season with Wildfire. Additionally, Nate Goff played for Raleign in 2017 and faced a lot of familiar faces during the weekend.

For the Chicago Union, cohesion, chemistry, and consistency from the “King”, (Pawel Janas,) were the keys to winning the game. The semifinal was a back and forth brawl between both sides. Chicago started widening the score gap near the end of the third quarter by going up by 3 scores. Throughout the fourth quarter, the Union looked strong and ready to ground the Flyers. However, with 40 seconds left in regulation, Raleigh rallied back and forced the game to OT.

After four exhilarating quarters of play, the AUDL witnessed their first ever overtime in Championship Weekend history. Chicago continued to push their limits and Drew Swanson made an incredible block which initially denied the Flyers from scoring but an unfortunate turnover led the Flyers to take the lead. Another dropped huck for the Union ended their Championship Weekend run.

The Raleigh Flyers won 21-20 and advanced to the AUDL Finals where they defeated the New York Empire, 19-16 on Saturday, September 11.

“We couldn’t convert breaks when we needed to and our O-line had unfortunate turnovers at the end of the game,” said Janas. Although Chicago Union fell short in Friday’s game, Janas recorded eight assists and Barker added to these stats with a total of eight goals.

“I thought the season was an overall success. We recruited the most talented team the Union had ever had and we won our division and made Championship Weekend, which I’m proud of. Obviously, we fell short of our ultimate goal of bringing a championship home to Chicago but good days are ahead,” said Janas.

Chicago ends their season with a record of 11-3 and are ready for another opportunity to bring a championship home to sweet home Chicago when the 2022 season commences!

“The 2021 Union had the most successful season of any other Chicago AUDL team. Looking back, the year was marked by camaraderie, swagger, and fun, and one that I will always look back on fondly. We knew that we had the makings of a championship team, but ultimately we couldn’t put the right pieces together at the end when it counted. I’m hoping that the experience of Championship Weekend and the sour taste of getting so close but falling short will motivate and inspire another successful 2022 season,” said Woods.