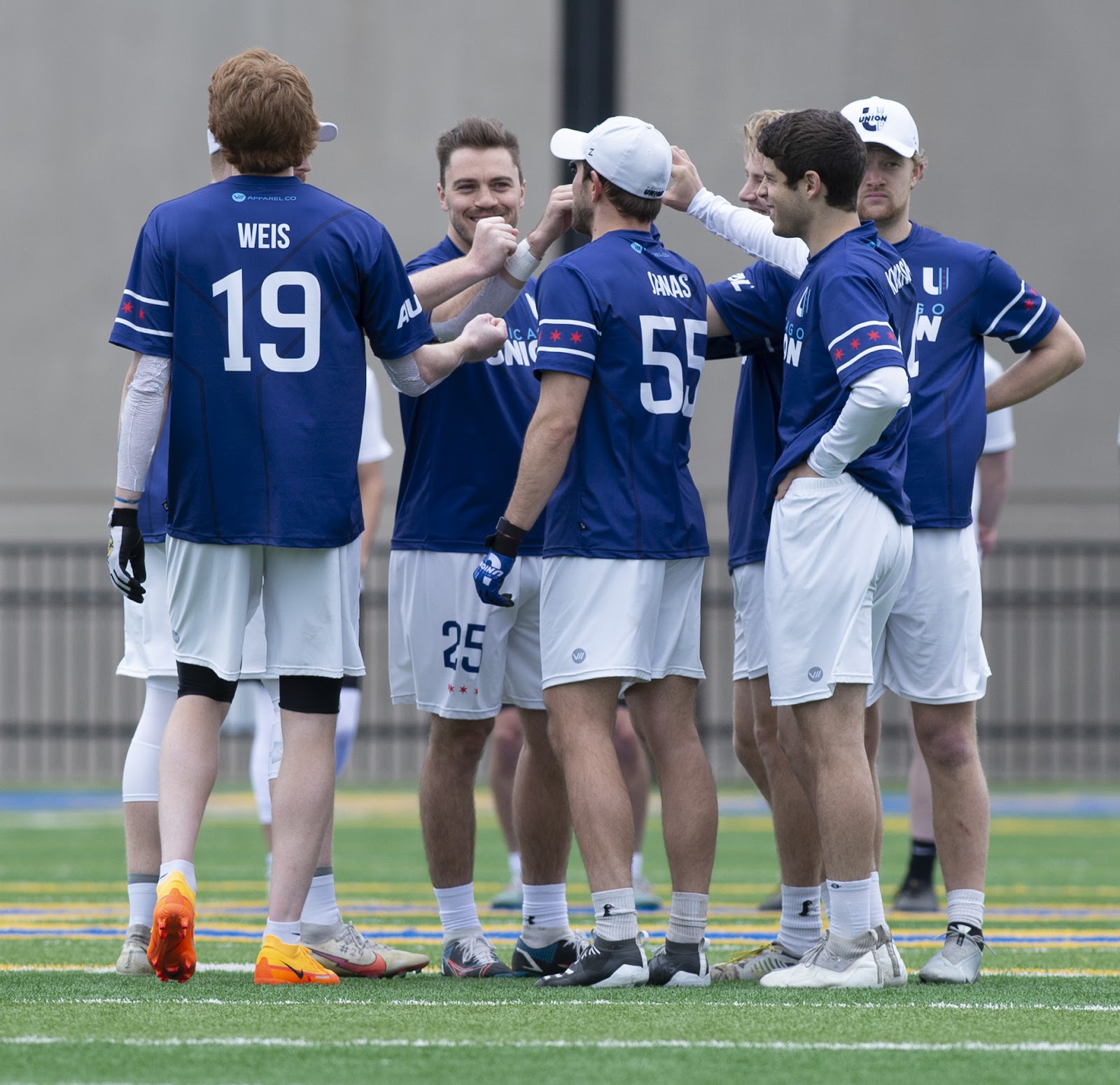 After 28 days of no games , the Chicago Union will be traveling  this weekend for a matchup against the Detroit Mechanix. First pull will take off at 6PM CT/7PM ET.

The Chicago Union played their last game on Saturday, May 7 against the Minnesota Wind Chill, winning 24-21.

As the competition rages on in the Central Division, the Union continue to sit idle with a record of 2-0 and remain the only team unbeaten of the six teams.

Chicago is currently leading the league in D-line break rate at 39.1 percent, converting 18 combined break scores in their two wins against Pittsburgh and Minnesota in Week 1 and 2.

Chicago’s defense is great at getting into their counterattack quickly off of opponent turnovers, and the energy from the team specifically from Jason Vallee, Nate Goff, Reid Martin, and Jace Bruner has overwhelmed recent opponents.

For this weekend, Eli Artemakis will be the player to watch out for as he is set to make his 2022 season debut against the Mechanix this weekend.  His rookie season consisted of 15 goals, 6 assists, 1 block, and a completion rate of 96.32 percent.

In his last matchup with Detroit, Artemakis had three goals and 194 receiving yards.

Additionally, Paul Arters will be another player to watch for as he will be returning to Chicago’s offensive lineup this weekend. Throughout the 2021 season, Arters recorded 13 goals, 22 assists, 2 blocks, and a completion rate of 96.32 percent. The last time he faced the Mechanix defense, he averaged over 25 yards per touch.

Speaking of the Mechanix, their offense continued to find rhythm in Week 4, and converted above 50 percent of their offensive possessions for the second straight week as Joe Cubitt netted over 550 yards of total offense for the third time in 2022.

However, as the Mechanix offense has improved, the defense has lost some teeth—the Detroit defense doubled their season total of breaks in a single game last Saturday, converting 2-of-9 against the Radicals.

Detroit’s 7.3 percent break rate isn’t just the lowest mark of any team for this season, but the lowest rate since 2014.

For the Detroit Mechanix, former Brown University star, Mac Hecht will be the player to watch for as he played 26 points, the majority on D-line, finishing with four assists, two blocks, and only one turnover on 26 throws during his AUDL debut.

Hecht paired with Johnny Bansfield leading the D-line, has created a formidable duo for a team that had been struggling with converting breaks.

The Mechanix D-line generated four break scores, equaling the combined total of their first three games of the season and the 16 turnovers that Detroit committed in the loss were the fewest in a full regulation game for the Mechanix since June 1, 2019.

For a team that has not won a game in three seasons and has a current record of 0-4, the Detroit Mechanix will surely be looking to get the win in this weekend’s matchup against the Chicago Union.

Although Detroit continues to edge closer to breaking the streak, will they come away with the win…or will Detroit’s losing streak live on?

The Chicago Union are back at home on Friday, June 10, for a matchup against the Madison Radicals at 6:30pm CDT at De La Salle Institute in Chicago, Illinois. Tickets can be purchased here.

It’s Chicago Sports Night/Awareness Night! -- Come on out and represent your favorite Chicago Sports team (hopefully the Chicago Union) and grab a beverage from our featured brewery, On Tour Brewing Co. at Friday’s game!