Madison Heights, Michigan – For the first time, the Pittsburgh Thunderbirds (6-4-0) entered the Sudden Death portion of overtime in the American Ultimate Disc League, and claimed a 24-23 triumph Saturday, July 6, against the Detroit Mechanix (0-11-0) at Bishop Foley Stadium. 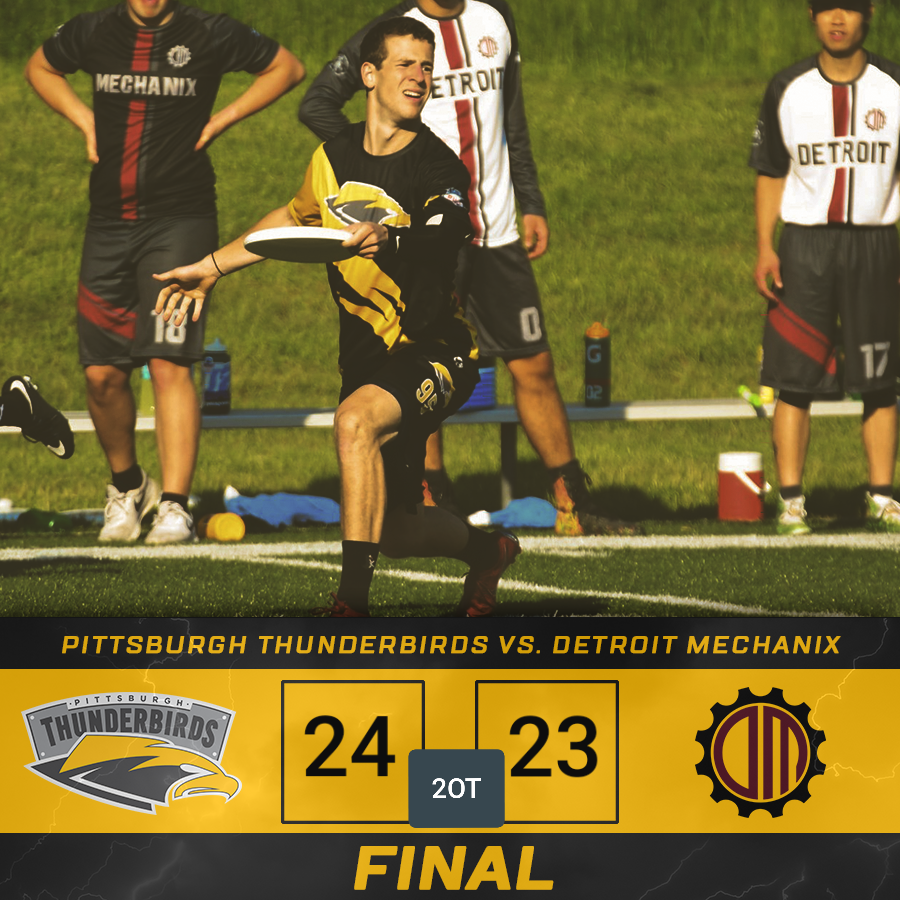 Detroit received the first pull of sudden death, and at the end of their drive, Joseph Cubitt threw the disc toward a group of players converging to the far right side of the end zone. Pittsburgh was able to knock it away. During the T-birds possession, Ed Fox delivered a block for the Mechanix on a Sam VanDusen overthrow at their end of the field but turned it back over to the Thunderbirds when Cubitt could not handle the pass. Jonathan Mast, near the visitor’s side hashmark, found Max Sheppard for his fourth score of the contest and the Play of the Game.

The Midwest Division combatants earnestly assembled three goals apiece during the five minute overtime trying to break their 20-20 deadlock after four quarters. Daniel Viggiani collected a pair of goals at 4:07 and again with 47 seconds left for the Mechanix. Pittsburgh won the coin toss to start overtime and kept pace with scores from Adam Burgess (1:54), Anson Reppermund (55 seconds), and Jimmy Towle (26 seconds).

Followers of the Mechanix saw their team build a commanding 7-4 lead in the first. Andrew “Shrew” Sjogren and Ben Cheer provided two goals apiece in the opening frame. The next two quarters, Detroit did not look like a winless team as they maintained a 5-4 edge in the second and the third on the scoreboard.

Where the Men of the Motor City faltered was in the fourth as they accumulated just three goals, all by rookie Austin Riegel. The Ohio Wesleyan University product led Detroit with six scores on the afternoon. Kevin Coulter and Cubitt took turns getting the disc to where it needed to be against the Black and Gold with nine and eight assists respectively. Austin “Pip” Johnson manned the ramparts and amassed five blocks for the defense. 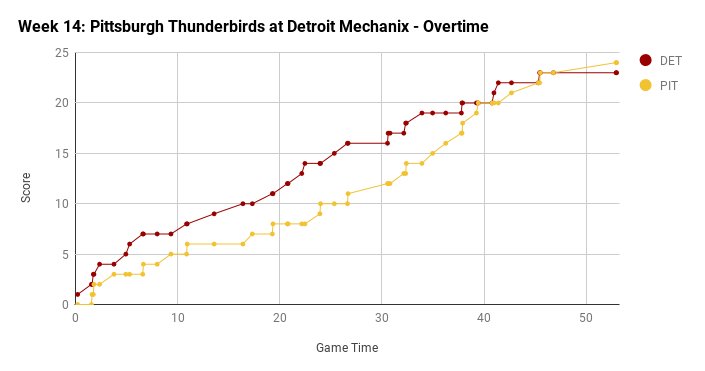 Box Score Bits: The Mechanix tuned up their offense as they fueled their stat line with 238 out of 260 throws for a 92 percent completion mark. Detroit gathered their third-highest offensive productivity this season at 63 percent. The Black and Gold crew was one notch higher at a 93 percent completion rate, hitting 223 of 240. The T-birds offensive productivity tallied 67 percent.

Evan Lepler commended Sheppard on the league website as one of his AUDL Honor Roll players for Week 14 for his contribution of 12 assists, four goals, and two blocks. The Edinboro University product tied Christian Pitts for the most points played in a single regular-season game with 42 against the Mechanix. Pitts had 42 in a 2015 victory over the Cincinnati Revolution.

Towle wrapped up the meeting with five goals. He helped to provide a robust defense as he joined Reppermund in furnishing three blocks apiece. Keeping the attack sharp and crisp was David Vatz who equaled Sheppard’s output with four scores of his own. Pittsburgh has never dropped a contest to Detroit.

Next Up: The Thunderbirds travel to the Land of Lincoln Saturday, July 13, to battle the Chicago Wildfire (7-4-0) at Langhorst Field. The opening pull at Elmhurst College in Illinois is 6:00 p.m. CDT. The game will be nationally broadcast on WatchStadium.com with the winner of the game clinching the #2 seed in the Midwest. 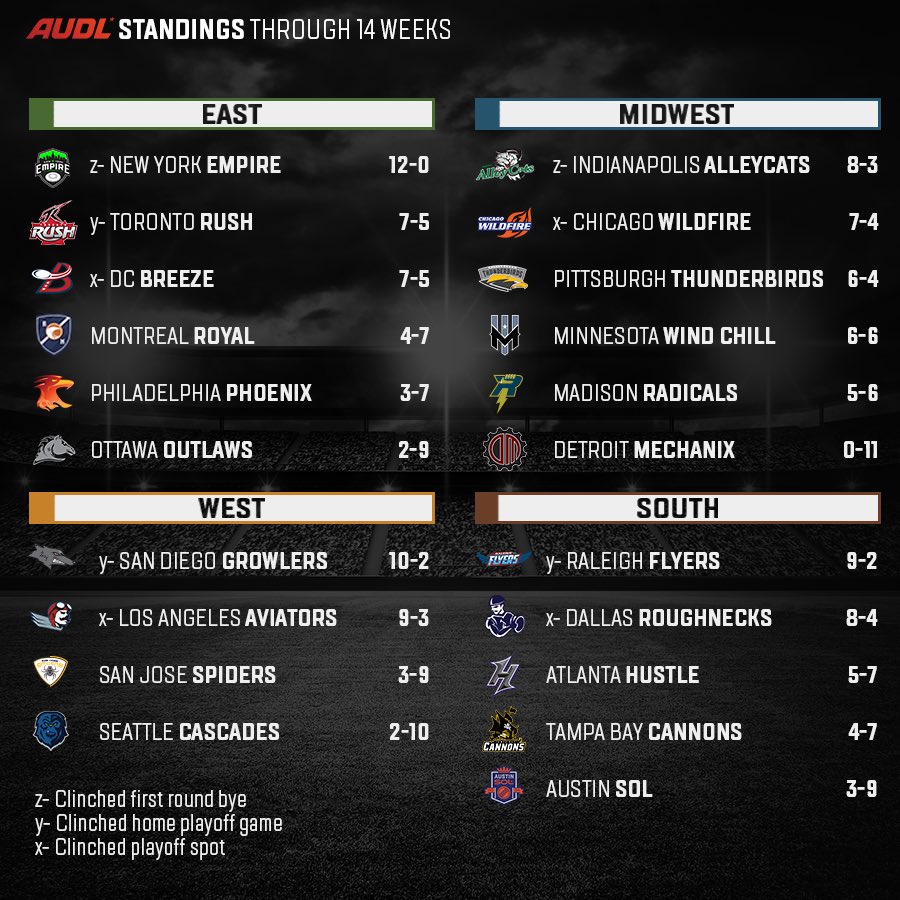