Allison Park, Pa. – The Pittsburgh Thunderbirds (5-3-0) have the opportunity not only to claim their sixth consecutive victory Saturday, June 29, against the Indianapolis Alleycats (6-3-0), they will also have earned a win against every rival team of the American Ultimate Disc League’s Midwest Division and claimed the 1st spot. The opening pull at JC Stone Field in North Park is 6:00 p.m. 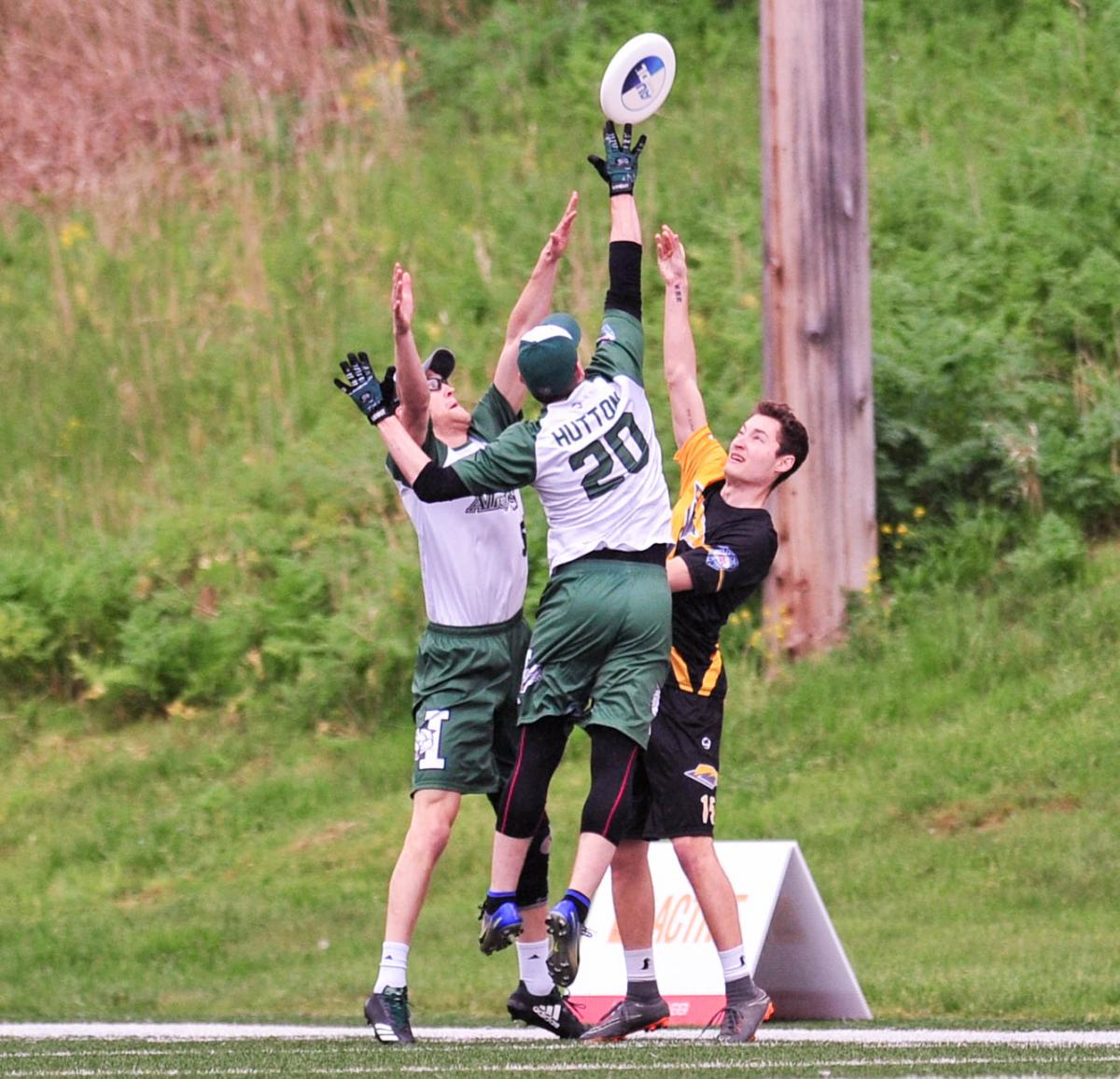 Head Coach Pat Hammonds’ Black and Gold squad defeated the Madison Radicals 21-20 in overtime Saturday, June 22, for just the second time in team history. The first triumph was also a home match back in June 2015.

Hammonds spoke with Evan Lepler on the league website, “This was a must-win game for us, and we knew it was for Madison too, which always makes an exciting one. This game did not disappoint.” Hammonds also reported that T-birds Co-Captain David Vatz commented about the contest, “The difference between our team today and our team [that lost to Madison in April] is our ability to take punches and keep getting up. Madison hit us really hard tonight, but we weren’t shook. We were able to regroup and finish this game the way we know how.”

Max Sheppard supplied seven goals, four in the first quarter, along with 42 minutes of playing time against the Radicals. The Edinboro University product is ninth in the AUDL with his career-high 33 goals. Thomas Edmonds got the disc where it needed to go with seven assists over Madison. The University of Pittsburgh alumnus is seventh in the league in completions with 398. Helping the defense to be active was Sam VanDusen and Alex Thomas with two blocks apiece.

Sheppard, also a Pittsburgh co-captain, talked with Louis Zatzman on the league site about starting the season 0-3 and the loss to Indy at home, “That first Indy loss at home, that really hurt us, mentally and physically. When we got our first win, that really set the pace for the season. Ever since that first one we got, we’ve been rolling with momentum, and we’ve been attacking right out of the gate and setting the pace in the beginning of games now. We’ve really focused on that, from the start.”

Matt Rezin in his Players To Watch column on the league web page thinks Mark Fedorenko could be a difference maker this week against Indy. Rezin wrote “Listed as a hybrid player, Fedorenko spends roughly 3/4 of his points playing for the o-line doing it all for the Thunderbirds. When he is needed on defense or after a turn, Mark is a solid defender with the skills to earn the disc back.”

My thought about the Player To Watch for the Thunderbirds against the Boys from the Hoosier State is rookie Dylan Best who has 10 goals and seven assists in five matchups this season. He tallied three scores in the win over the Radicals.

Indianapolis is coming off their own thrilling one-point win at home last week, a 24-23 triumph over the Minnesota Wind Chill (5-5-0). Cameron Brock put up a pair of goals in the fourth quarter while Keegan North, Levi Jacobs, Travis Carpenter, and Keenan Plew delivered one apiece to edge out the Boys from the North Star State.

Looking at who makes the Alleycats offense purr, Carpenter is ninth in the AUDL with 38 assists and 368 completions. Brock is just outside of the Top Ten in goals with 32 while Rick Gross owns 31. Providing the claws for the A-cats defense is Nick Hutton and Spencer Loscar with 10 and nine blocks respectively.

Alleycats Head Coach Eric Leonard chatted with Brendan Ringwood about the rest of the 2019 campaign. He said, “Pittsburgh and Chicago are both playing great ultimate and we are going to have to play with the same effort we displayed Saturday to close the season out.”

I like Jacobs who hit the box score on Saturday, May 4, with three goals and assists against the Black and Gold as my Player To Watch for Indy.

My Prediction: This clash could come down to another one-point nail-biter in the fourth quarter. The Black and Gold wrap up their last regular season home game with a 21-20 victory. Look for your choice seats online.

Other Voices: The odds experts at the sports gambling website mybookie.com have the hometown Thunderbirds as 1.5 point favorites with the over/under arriving for the second week in a row at 38.5.

The guru’s of everything ultimate at Massey Ratings leaves the T-birds at No. 19 in their rankings while the A-cats are five slots ahead at No. 14. Their outlook is an 18-17 win in favor of Indy.

Weather: The barons of barometric pressure at weather.com see mostly cloudy skies for Saturday. The chance of showers is low. The high to begin play should be 81 degrees with a low of 74 by 9:00 p.m. Winds project out of the west to the northeast at five to nine mph.

Tune In: Another way to check out every goal of the Black and Gold is to tune in the voice of the Thunderbirds, Matt Weiss, as he announces all home games on AUDL.TV(subscription service).

Next Up: Pittsburgh travels to Michigan Saturday, July 6, to face off with the Detroit Mechanix (0-8-0). The opening pull at Bishop Foley Stadium in Madison Heights is 4:00 p.m.