Allison Park, Pa. – The Pittsburgh Thunderbirds (5-3) for just the second time in team history beat the Madison Radicals (4-5) 21-20 in overtime on Saturday, June 22, at JC Stone Field. Both victories in the American Ultimate Disc League were accomplished at home in the City of Bridges.

When time expired in the fourth quarter, the score was 19-19 between the Midwest Divison combatants. After the coin toss, Pittsburgh elected to receive the opening pull of the five minute overtime. Thomas Edmonds took the sixth pass of the drive and connected on a long strike to Max Sheppard at 4:27 to make it 20-19.

Both teams defended well on the next two drives as neither squad could get into the end zone. When Madison got the disc back on a block, they kept working the disc across the field and on the 15th throw down the Radicals sideline Pat Shriwise found Kevin Brown for the goal at 2:04 of the overtime for a 20-20 deadlock.

Pittsburgh’s last possession saw them get the disc to the Madison 18 yard line. After a pair of penalties on the Radicals, Edmonds caught Dylan Best’s pass and located Sheppard in the far right corner of the end zone for the game-winning score with 28 seconds remaining. The T-birds Sam VanDusen helped to break up Brown’s final throw down the field in Pittsburgh territory.

The Thunderbirds came out determined to play their game against the 2018 defending AUDL champions. They forged a 7-4 lead at the end of the first. Sheppard collected four of his team-leading seven goals in the opening frame.

Head Coach Pat Hammonds saw the Black and Gold put together a hard-fought 4-3 edge in the second to go into halftime with a 11-7 advantage. Mark Fedorenko came thru with two of his three goals in the quarter.

Madison came out strong and gathered five consecutive goals from 11:37 to 4:41 in the third quarter to construct a 12-11 lead. Avery Johnson, Victor Luo, Chase Marty, Chris Wilen, and Jeff Maskalunas were the quintet who provided the point surge.

Coming off their persuasive 6-3 run in the third, the Radicals would add another six goals in the fourth. The long-time rivals would tie the contest six times over the final frame.

For the Radicals, Josh Wilson, Brown, and Shriwise provided three assists apiece to the score sheet. Another trio of Colin Camp, Johnson, and Wilen owned three goals each while Sterling Knoche allocated four blocks on defense against the Thunderbirds.

Box Score Bits: Pittsburgh kept firing the disc downfield and made 279 of 293 throws for a 95 percent completion rate. They wrapped up the night with a 66 percent offensive productivity grade. Madison concluded the meeting by hitting 295 of 308 throws for a 96 percent completion rank. Their offensive productivity was 14 points lower at 52 percent.

VanDusen averaged 6.77 seconds of hang time on his 16 pulls for the Black and Gold. He tied with Alex Thomas for the lead in blocks with two apiece. Sheppard reminded us why he won the Most Valuable Player award at the inaugural AUDL All-Star Game as he led the T-birds with 42 minutes played to go along with his seven goals. Edmonds racked up seven assists. 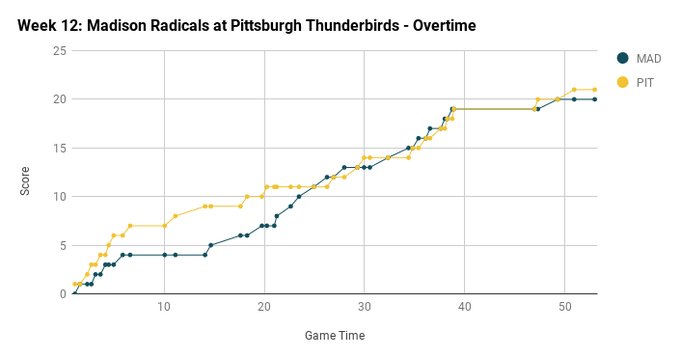 New Faces: Dylan Best, who played ultimate at the University of Pittsburgh’s En Sabah Nur program, put up three goals and 37 catches over 30 minutes of playing time in the fifth contest of his career.

Snyder Stat: While the AUDL does not keep this official stat, I like to acknowledge the player who contributed the most “hockey assists” for the Black and Gold against the Radicals – the pass that leads to the Goal Thrown pass (assist) for the score: Thomas Edmonds with four, followed by Jonathan Mast and Best adding three apiece. Shriwise tallied five for the Radicals.

Final Word: I had the opportunity to talk to second-year player Patrick McMullen after the contest. The first time the T-birds took down the Radicals was 2015 and McMullen had just moved to the area to begin graduate school at the California University of Pennsylvania. He told me, “This week we had a good practice, players working hard and grinding. The veterans reminded the rest of us of knowing who the Radicals are and to play our game.”

Looking Back: The last time Pittsburgh defeated Madison, it was a home game on Saturday, June 6, 2015, and the box score listed a 26-22 win. Aaron Watson put up six goals while Pat Earles delivered nine assists during the evening. Ethan Beardsley and seven other players supplied one block apiece.

David Vatz, Steve Mogielski, Anson Reppermund, Fedorenko, Mast, and Sheppard were on the field for the Thunderbirds triumph in 2015 and this past Saturday.

Next Up: Pittsburgh hosts the current Midwest Division leaders, the Indianapolis Alleycats (6-3) Saturday, June 29, in the T-birds final home contest of the regular season. The confrontation gets underway with the first pull at 6:00 p.m.

Tune In: If you can not get over to North Park this weekend, you can keep tabs on the Black and Gold by tuning in the voice of the Thunderbirds, Matt Weiss, as he announces all home games on AUDL.TV (subscription service).

Quick Look At The Standings… 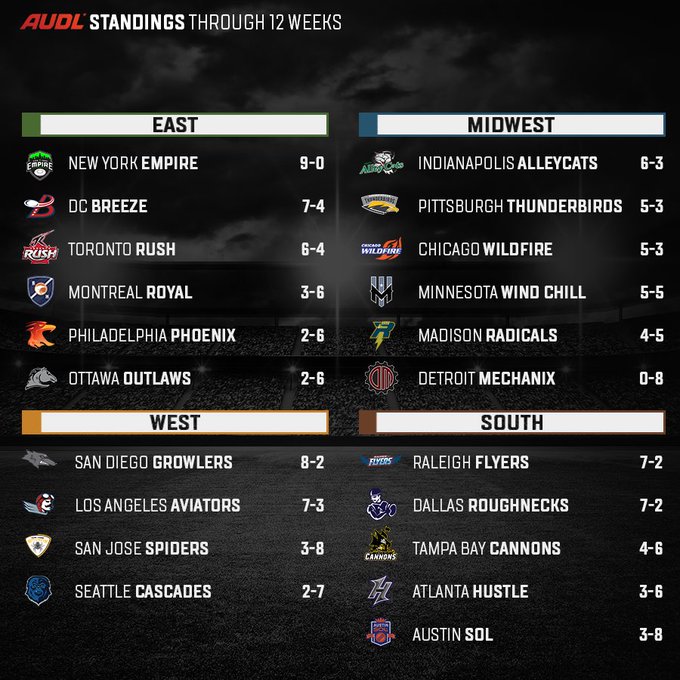