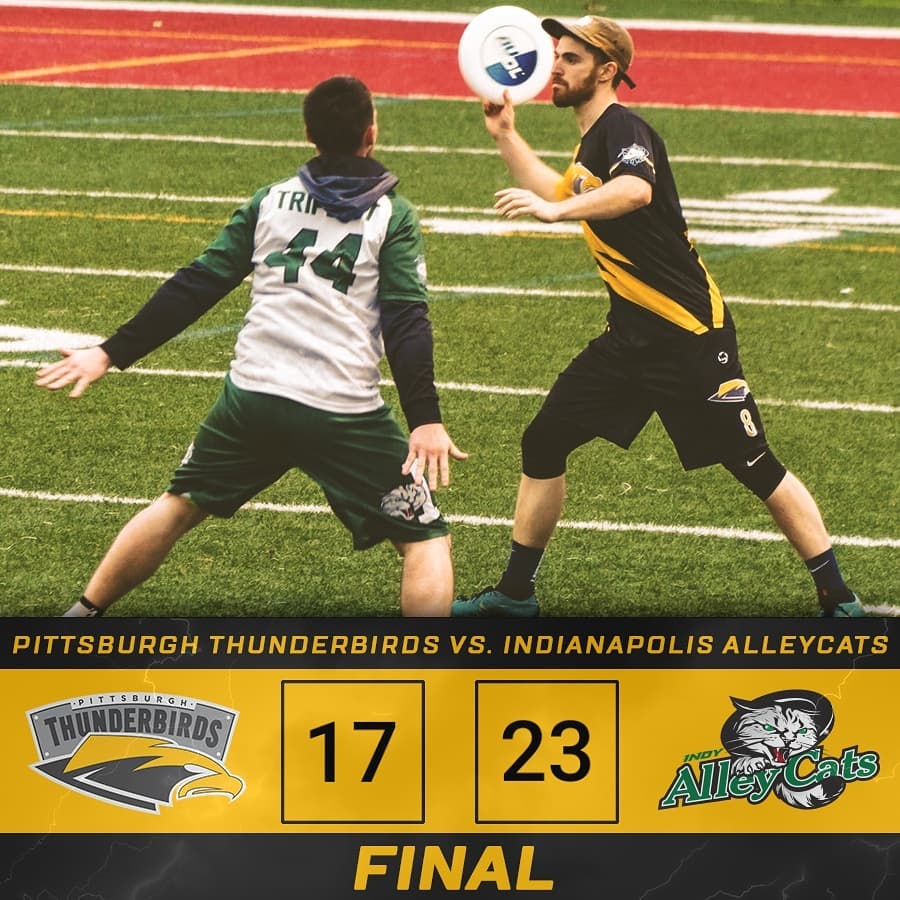 Westfield, Indiana – Followers of the Pittsburgh Thunderbirds enjoyed last-second victories and come from behind wins over the previous 10 weeks of the 2019 campaign. But, the time for rallies ran out Saturday, July 27, when the Black and Gold lost to the Indianapolis AlleyCats 23-17 for the Midwest Division crown in the American Ultimate Disc League.

Pittsburgh claimed the first two goals of the match and owned a 4-3 advantage due to scores from Max Sheppard, Jack Hefferon, Dylan Best, and David Vatz. However, after Jonathan Mast’s end zone toss to Best deflected into the air, Indy’s Jacob Fella went up and snatched the disc for a Callahan goal. It squared the contest at four apiece. The play is catching the disc on an interception in the opponent’s end zone by the defensive player.

Indianapolis collected three of the next four goals and assembled a 7-5 lead to close out the first quarter at Westfield High School. Conner Henderson, Levi Jacobs, and Travis Carpenter gave the Green and Black an edge they would maintain throughout the rest of the matchup. Despite winds coming out of the south to southwest at 12 to 16 mph and gusts up to 22 mph, the Men of Naptown continued their grip on the scoreboard 13-10 heading into the intermission.

The Alleycats went on a 5-2 surge in the third quarter to take control 18-12 going into the fourth. Pittsburgh did not capitulate and kept it even in the last frame, 5-5, with back-to-back goals from Anson Reppermund and single scores from Best, Carnegie Mellon’s Ryan Hoffman, and Thomas Edmonds. 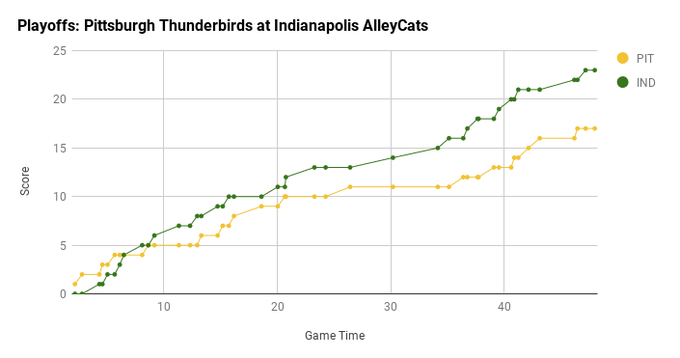 Sheppard spoke with Evan Lepler in his Tuesday Toss column on the league web site about the A-cats play, “Indy played great defense against us. They had the upper hand because they adjusted to the wind better than we did. It really showed early in the game. Indy did a much better job handling the upwind points than we did. We had three chances to seal the downwinder after the upwind break, but Indy kept grinding the upwind O-points….Indy stayed very patient and worked the disc up the field, taking more appropriate hucks than us…They certainly came down with more hucks than we did, and it paid off for them in the end.”

I spoke with T-birds General Manager Andrew Gardner about his closing thoughts on the season and the game, “As disappointing as the result in Indianapolis was, we really have to take a step back and look at what we were able to accomplish this season. We went from 20th out of 21 teams in the pre-season AUDL power rankings, to hosting a home playoff game, the first since 2016. Not only that, we were able to give 360 plus roaring Thunderbird fans a great 1 goal win. We had so many rookies make immediate impacts on this team, and veterans take on new leadership roles. Head Coach Pat Hammonds and Assistant Coach David Lionetti put together new schemes and implemented a new team identity and culture environment that paid dividends for us throughout the season.”

He added, “We hit for the Midwest cycle, defeating every team in our division for the first time since 2015. Max Sheppard won the AUDL All-Star MVP award. We introduced ultimate to a brand new audience in North Park and fans were absolutely electric all year long at games and following along on AUDL.TV. Every single team in the playoffs except for one will end their season on a loss. We won 8 of 9 down the stretch and tasted victory in the playoffs. We’re not satisfied with the result, but we can be damn proud about what we accomplished in 2019.”

Snyder Stat: Although it is not an official AUDL statistic, I like to recognize the player who turns in the most “hockey assists” for both teams – the pass that leads to the Goal Throw (assist) for the score. For Pittsburgh, Sheppard contributed four, followed by Best with three. Carpenter supplied five for Indy while Keenan Plew added four during the meeting.

AUDL Clipboard: The Ultimate Final Four are the New York Empire, the San Diego Growlers, the Dallas Roughnecks, and the Indianapolis AlleyCats. They are part of the AUDL Championship Weekend on Saturday, Aug. 10, and Sunday, Aug. 11, at Foothill College Stadium in Los Altos Hills, California.