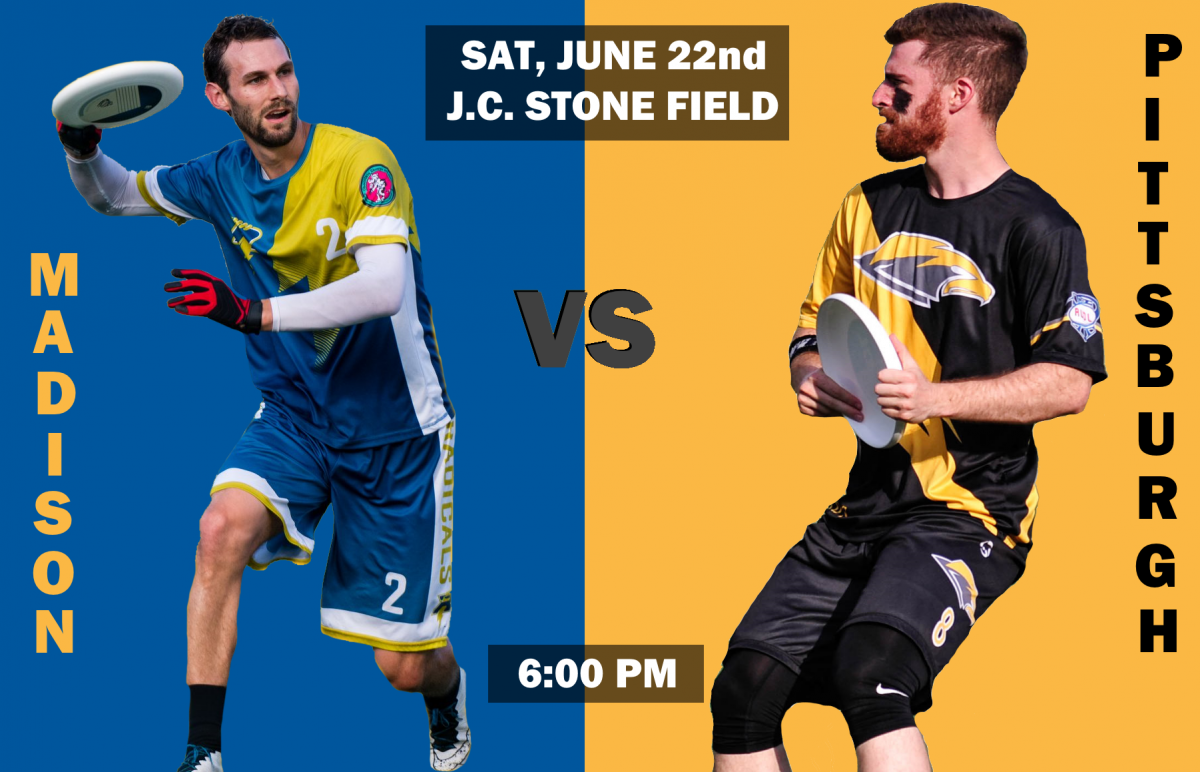 During their four-game winning streak, the Black and Gold owns 86 goals and has a 96 percent completion rate in three of their four conquests.

The Radicals claimed the first round against the T-birds 26-17 in the 2019 season opener on Saturday, April 20, at Breese Stevens Field in Wisconsin. Max Sheppard, David Vatz, and Jimmy Towle contributed three goals apiece to the box score for the T-birds. Chris Graber, Tyler DeGirolamo, and Towle are listed as inactive for this week’s matchup on the league website.

Looking back, the last time the Thunderbirds took down the Boys from the Badger State at home was Saturday, June 6, 2015, and the scoreboard read 26-22.

I spoke with Pittsburgh head coach Pat Hammonds about the preparations this week to battle Madison, and he told me, “A big part of our success during our current win streak comes from our ability to prepare. We have held very focused and productive practices this season, and we feel prepared for our games every week as a result. Part of our weekly preparation is focused on implementing adjustments we can make against specific opponents, but most of our energy and effort is focused on maximizing our own potential.”

He continued, “We believe that if we continue to challenge each other and grow as a team every week, that we are giving ourselves every advantage to win. I know it’s easy to look at Madison rolling in this weekend, and to argue that it’s a “big game,” but we don’t think that way. We don’t play “big games” or “gimme games;” we play Thunderbirds games. As long as we have the humility to prepare, and the confidence to perform, we feel great about our ability to compete with anyone.”

My follow up question was about the blending of first-year players like Dylan Best, Eike Cramer, Jasper Tom, and Graber with veterans like Max Sheppard, Thomas Edmonds, Sam VanDusen, and Steve Mogielski to create a winning environment. What does Hammonds look for in a player to be part of the Thunderbirds? He responded, “One thing that has been very important to me as a coach is building a positive team culture. I believe that strong team culture yields good results, and not the other way around. With that in mind, the leadership (coaches, team captains, and GM), sat down well before the season began to brainstorm a road map for building a strong and supportive culture. We identified 3 team values that shape how we prepare and how we hold each other accountable.”

“Our strength this season is a result of clearly defining what we all expect from our teammates, and supporting players who are fully committed to each other and our values. Guys are committed to pursuing their best, and always bringing their best selves to everything we do. I’m inspired by the hard work, dedication, leadership, and vulnerability that each every one of our players has embraced. I also can’t stress enough how vital our captains are to this team. Sam VanDusen, Max Sheppard, Jimmy Towle, and David Vatz are largely responsible for defining our values, and lead by example week in and week out. The team has fully embraced their vision and we are growing as a result.”

“This year the Thunderbirds has a roster of 30 plus players, however, I am only permitted to dress 20 players for each game. That means that I need to make tough decisions every week, and unfortunately, it means that talented and worthy players are left outside of our active 20. We believe that the success of the Tbirds this season isn’t built on the work of the 20 players rostered for a given game, it’s built on the work effort of every player who is committed to the preparation we put in at practice and behind the scenes. We are excited to see where our commitment to our values and our preparation can take us this year.”

Co-Captain David Vatz talked with me about the Black and Gold being 3-1 at home and what it means to the squad. He said, "We’ve always had such great support from our fans, and playing at home definitely gives us a little extra motivation to get a win for them. It’s always great to play in front of your friends and family, and also to be in a place where you feel comfortable. We’ve only beat Madison once in our history, and it was an extremely memorable home game in our first season – the crowd came out in droves for that game and their energy definitely helped put us over the edge and helped us secure the win. All in all, very excited to take on the reigining AUDL champs this weekend in Pittsburgh!”

Madison has lost three of their last four contests and collected 65 goals. Radicals captain Kevin Pettit-Scantling chatted with Louis Zatzman on the league site about facing the T-birds, “With Pittsburgh, they’re not scared. They are just a fearless group of guys who throw anything they want against our zone, and if they’re all on that day and clicking, then it’s really hard to beat a team like that. The Radical zone doesn’t really intimidate them. It’s really hard. A lot of our blocks, and a lot of our success comes from teams playing it safe, and they do not do that.”

Pettit-Scantling added, ““As far as trusting one another and believing that we have a winning, championship team, I still believe that. I’m 100 percent bought in that we have the winningest program, and right now, all we have to do is show a bit of consistency at practice and games, and implement our strategy, and we’ll be fine.”

My Prediction: This meeting should be a close one on the score sheet, but I believe Pittsburgh downs Madison 20-19 this time around. Discover your seats for this scintillating showdown on the Thunderbirds web page.

Other Voices: Beginning on Tuesday, June 18, the sports gambling website mybookie.com is posting betting lines for the first time on AUDL games. They forecast the T-birds as 1.5 point favorites with the over/under coming in at 38.5.

Checking in with the ultimate onlookers at Massey Ratings, Pittsburgh is at No. 19 in the rankings while Madison is holding at the No. 15 slot. The appraisal crew at Massey is projecting a 19-18 triumph for the Radicals.

Weather: The wind speed watchers at weather.com are forecasting mostly sunny skies for Saturday with a zero to five percent chance of any rain. The high to start the match should be 75 degrees with a low of 68 by 9:00 p.m. Winds appear to be out of the north to northeast at three to six mph.

Tune In: Remember, the next best way to keep track of the Black and Gold is to dial up the voice of the Thunderbirds, Matt Weiss, as he broadcasts all home games on AUDL.TV (subscription service).

Next Up: Pittsburgh welcomes back the current Midwest Division leaders, the Indianapolis Alleycats (5-3) Saturday, June 29, to the North Park complex. The battle starts with the first pull at 6:00 p.m.