St. Petersburg, Florida – The Pittsburgh Thunderbirds touch down in the Sunshine State Saturday, May 28, when they take on the Tampa Bay Cannons (0-3-0). These American Ultimate Disc League squads get underway at Gibbs High School in St. Petersburg at 7:00 p.m. 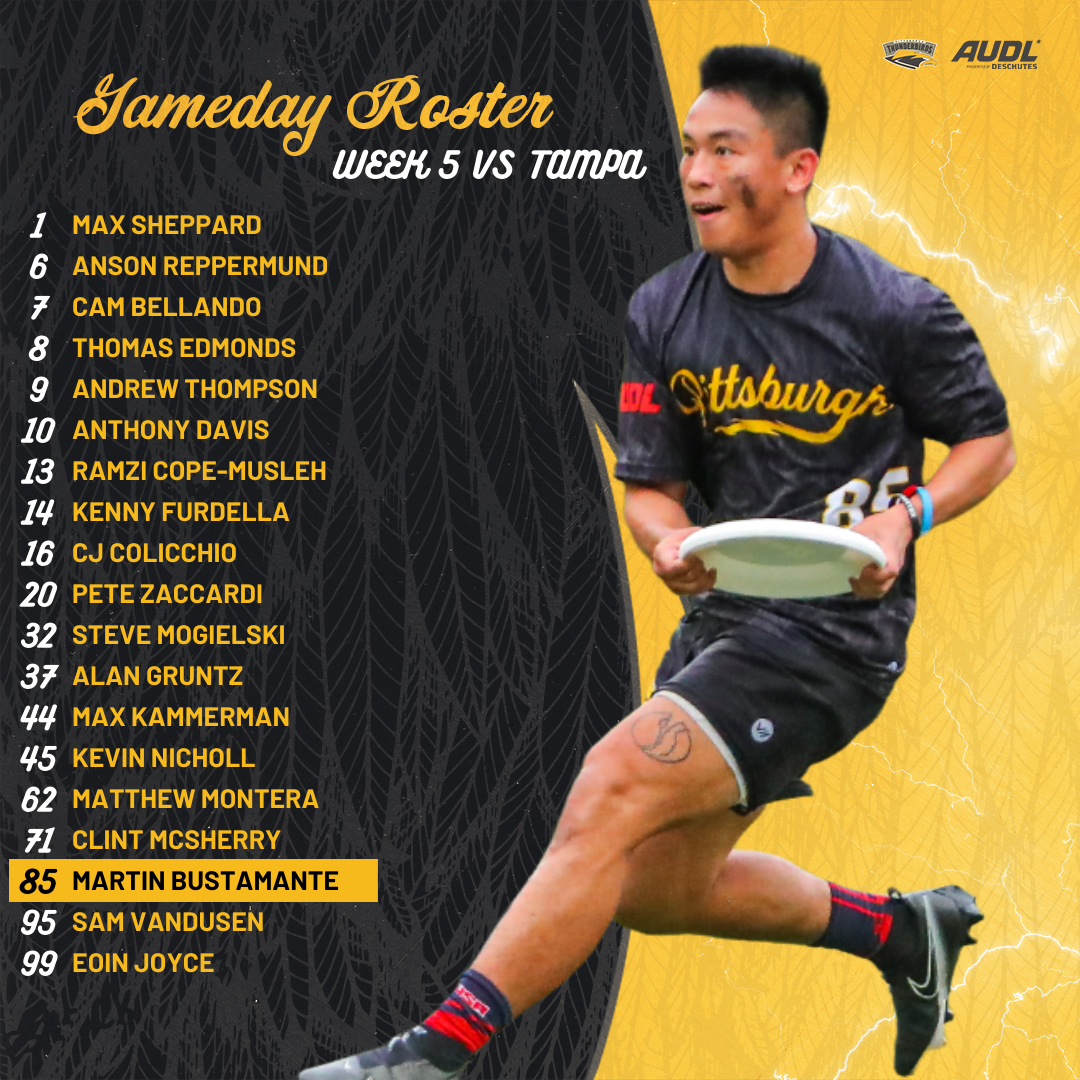 Over the first four matches, there are three areas of the game Black and Gold first-year head coach Max Barowski still needs to work on so the Tbirds can soar.

First: Last week in their 20-16 loss in the home opener versus the Indianapolis AlleyCats, the T-Birds assembled a season-best red-zone conversion rate of 76 percent at JC Stone Field. They need to push the conversion rate up every time because averaging 14.25 points per contest will not get you to the playoffs.

Second: Pittsburgh committed a game low 19 turnovers against the Boys from the Hoosier State. It is vital to keep dropping the hammer on turnovers. The disc belongs in the hands of Max Sheppard, Thomas Edmonds, CJ Colicchio, and the rest of the Black and Gold.

Third: This final observation is my outlook from the press box. The only game where the Thunderbirds got out of the blocks and owned the lead after the first quarter was the season opener in Detroit against the Mechanix. They had a 4-3 edge over the Boys from Motown. The Union had a 6-4 advantage in Chicago, the Radicals jumped out to a 5-2 lead in Madison, and the AlleyCats duplicated the 5-2 grip of the box score. I think it would help reduce the challenge of a comeback. Establish your control of the meeting sooner instead of later.

Some of the good news this season belongs to Jimmy Towle, who has a 94.74 completion rate percentage since the start of the 2022 campaign while Ian Engler in two games brings 994 throwing yards to the clipboard. Collicchio gets the disc where it needs to go with ten hockey assists. Connor Newell supplies five blocks to the defense and eight hockey assists on offense.

From the Pittsburgh Thunderbirds YouTube channel – Pittsburgh 2022: This is Professional Ultimate Frisbee…

Tampa Bay dropped anchor on a 2-10 mark in 2021 as the Cannons claimed seventh place in the Atlantic Division. First-year head coach Mike Taylor needs the Yellow and Black to find a way to improve their AUDL worst red-zone conversion rate of 61.1 percent. This season, they tied with the Chicago Union for third from the bottom with just 43 points.

After three contests, Carl Johnson with six goals and Adam Vinson with five scores light the fuse to the Cannons’ offense. Tannon Hedges with eight assists and Billy O’Bryan with seven helpers are working hard to keep the disc flying downfield. Brandon Perales checks in with seven hockey assists and 800 throwing yards, while Cody Coates adds three blocks to the defense.

The quartet of Jorge Delgado, Jaime Perez, Matt McDonald, and Sean Plunkett could contribute to a winning Tampa Bay box score against the Thunderbirds.

Broadcast: Keep every pull and huck in focus on the subscription streaming service AUDL.tv.

NEXT UP: The first weekend in June, the South Side will be rocking as Highmark Stadium has the games. The Tbirds confront the Madison Radicals (3-0-0) Friday, June 3 at 7:00 p.m. The Pittsburgh Riverhounds (7-3-1) clash with Detroit City FC (7-2-3) Saturday, June 4, in United Soccer League action at 7:00 p.m.

Meet your family and friends to watch the Thunderbirds by getting your tickets here. The Hounds faithful can select their favorite seats here.

Written by Larry Snyder, originally on Top of the Incline Sports