Elmhurst, Illinois – The stakes loom tremendously when the Pittsburgh Thunderbirds (6-4-0) visit the Prairie State to battle the Chicago Wildfire (7-4-0) Saturday, July 13, at Langhorst Field. The winner claims the No. 2 playoff seed in the American Ultimate Disc League’s Midwest Division. The combatants come together at Elmhurst College at 6:00 p.m. CDT.

Last week, the Birds of Thunder won 24-23 on the road in rip-roaring Sudden Death double overtime against the Detroit Mechanix (0-11-0) at Bishop Foley Stadium. The Men of Chi-town lost 24-21 to the first-place Alleycats (8-3-0) in Indianapolis. Coming into this matchup, Pittsburgh is 2-2 in road contests while Chicago enjoys home cooking as they are 4-1.

I spoke with T-birds head coach Pat Hammonds a week ago about the essential keys to winning on the road. He said, “Traveling in the AUDL can prove to be difficult at times. You often don’t have your full roster available for road weekends, and you trade your home supporters for hostile environments. You are also forced to sacrifice pre-game rituals and routines and embrace the unpredictability of travel logistics (tight legs, traffic jams, limited opportunities to eat a balanced meal, etc.) Despite the challenges, Thunderbirds are going to have to find ways to win on the road down the homestretch; we can clinch a playoff birth with 2 out of 3 wins vs. Detroit, Chicago, and Indy.”

He added, “The key for us is to find ways to normalize our game routines. We can’t always control what happens leading up to our warm-up, but we are focused on locking in and holding high expectations of our time together. We commit to a focused and disciplined warm-up and playing 4 complete quarters. If we can effectively do that, then we believe we’re in control of our outcome regardless of where we play.”

Co-captain Max Sheppard talked with Evan Lepler on the league’s website about making the playoffs. He commented, “I don’t think about the hypotheticals very much; all I know is that we need to win. Chicago and Indy are both very good teams; it is going to come down to who wants it more. Overall, the Thunderbirds are never out of contention until the last whistle is blown. We have proven we can come back in any game, and this weekend is just another test for the Thunderbirds.”

Thunderbird Players To Watch: Sheppard owns a career-high 42 goals and 43 assists after 10 games for the Black and Gold. He is eight and seven, respectively, away from the 50 mark in both categories. You should not overlook Thomas Edmonds because when No. 8 has the disc, good things happen on the score sheet. He is second in assists with 34 and third in goals with 18. Keep an eye also on Jimmy Towle, Dylan Best, Anson Reppermund (19 blocks), and Alex Thomas.

Wildfire Players To Watch: Pawel Janas helps the disc to get into the right hands as he leads the Wildfire with 69 assists. Michael Pardo and Matthew Rehder have burned the opposition with 26 goals apiece. Others on the radar are Drew Swanson (22 blocks), Jack Shanahan, Tommy Gallagher, and Seth Weaver.

AUDL Announcement: The league disclosed on Friday, July 12 that they are presenting the inaugural AUDL Integrity Awards to the players who exemplify the highest level of integrity on and off the field. There is one winner for each of the four divisions. 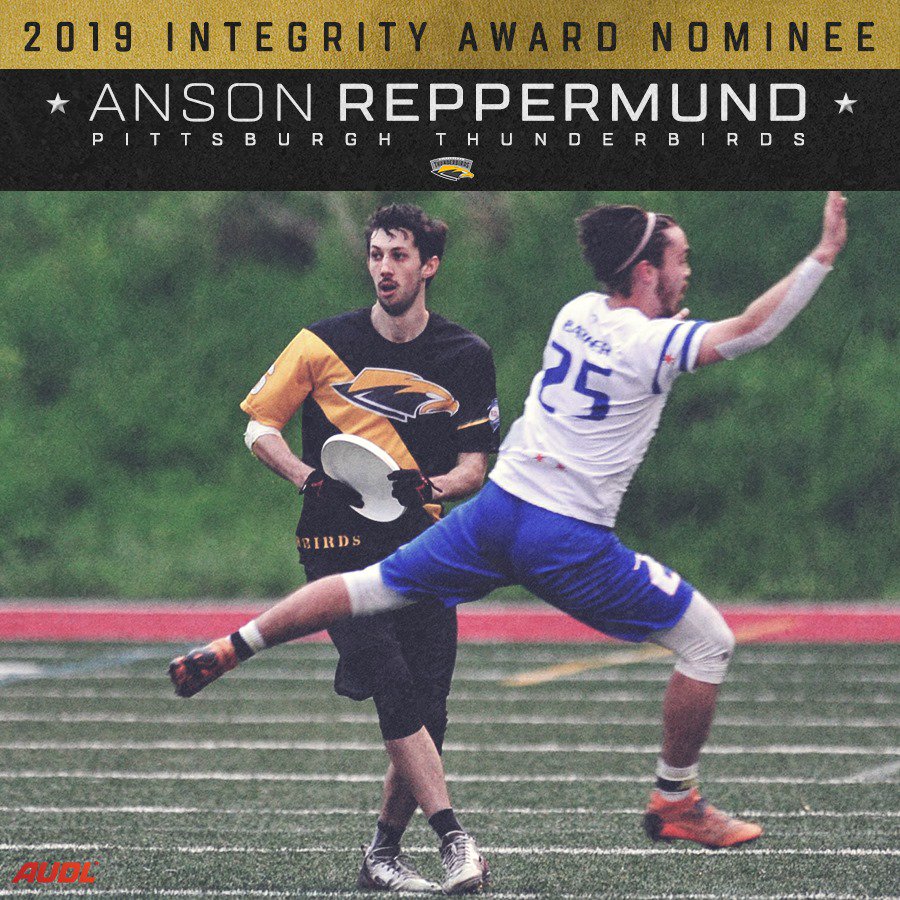 One of the league’s most distinctive rules since its inception, the Integrity Rule permits a player to call a foul on themselves or to overturn an incorrect call that would have benefited their team. The players within their corresponding divisions will choose their winners. The reveal comes on Championship Weekend.

My Game Prediction: I believe the T-birds claim their third road victory of the season by dousing the Wildfire 22-21 in the Land of Lincoln. If you head down the highway to watch the players of the Steel City, here is where you can pick up seats online.

Other Voices: Casting a dissenting vote is the ultimate onlookers at the ever-present Massey Ratings. They prefer Chicago by four, gathering a 22-19 triumph at the end of the fourth quarter.

Joining the chorus is the ultimate disc observers and number crunchers at the sports wagering website mybookie.com. The calculation of odds has the hometown Wildfire as -3 favorites with the over/under registering at 40.5.

Weather: The expectations from the doppler analysts at weather.com are for mostly cloudy skies with the possibility of scattered showers or thunderstorms in the afternoon. The prognosis for the opening pull is a 35 percent chance of precipitation. When the players come out, the game-time temperature should be 83 degrees. Winds could blow in from the north to northeast at eight to nine mph. Poke the link for your updates.

Tune In: Check out every over the shoulder catch by visiting online, and selecting the Black and Gold as your preferred team on AUDL.TV(subscription service). The matchup is also part of the national broadcast on WatchStadium.com.

Next Up: The Thunderbirds wrap up the 2019 campaign by visiting the Hoosier State Sunday, July 14, to take on the Indianapolis Alleycats (8-3-0). The squads face off at the Grand Park Events Center at 4:00 p.m. EDT.

More From The AUDL Channel On YouTube.com – 2019 AUDL Game Of The Week: Pittsburgh Thunderbirds At Chicago Wildfire…