Grand Rapids, Michigan – Coming off a 3-1 homestand during May, the Pittsburgh Thunderbirds (3-3) head back out on the road Saturday, June 1, for a meeting with the Detroit Mechanix (0-5) at Grand Rapids Christian High School. The Midwest Division squads in the American Ultimate Disc League come together for the opening pull at 5:45 p.m. EDT.

I spoke with T-birds general manager Andrew Gardner about the success of the homestand and he told me, “Our recent stretch of home victories reinforces what we knew, that we could compete with anyone in our division. We all truly believe that, but it’s nice to actually go out and get those wins to prove it.”

Max Sheppard is Pittsburgh’s representative for the inaugural AUDL All-Star Game next weekend. The Edinboro University alumnus is first in goals with 22 and is second in blocks with six. 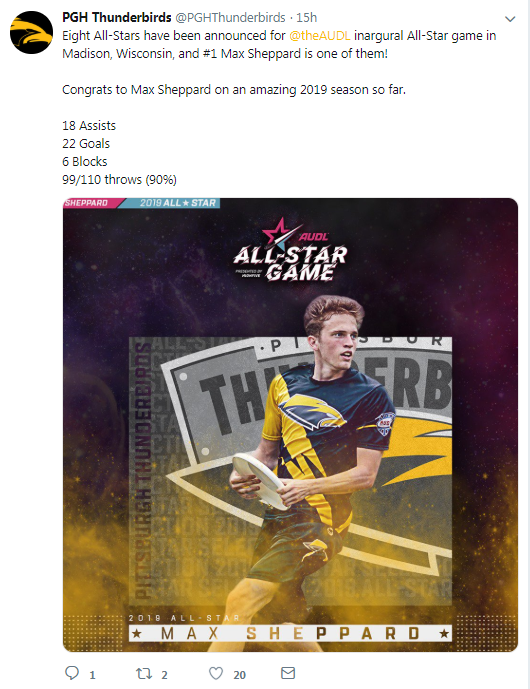 Gardner talked about the All-Star event and if it could come to the Keystone State, “The inaugural All-Star Game should be a fantastic event for players and fans across the country to see some of the best ultimate athletes. In Pittsburgh, we’d love to have the opportunity to host All-Star weekend in the future. It will be exciting to see how the entire weekend plays out as a fresh change of pace to compliment the AUDL regular season.”

Thunderbird players who should be on everyone’s All-Star radar in my opinion are Thomas Edmonds, Sam VanDusen, and Anson Reppermund. The duo of Edmonds and VanDusen own 19 assists apiece. Reppermund is the double digit leader in blocks with 12.

My last question for Gardner was who among the rookies is impressing you this season? He responded, “We’ve had such a great rookie class this season from top to bottom. Chris Graber, the youngest T-Bird on our roster at 20 years old is one of the most electric rookies on the team this year. He just makes plays. If there was a stat for shoulder height layouts and posterizing skies, he would be at the top of the charts in the League. I just love watching Graber play ultimate. Dylan Best has also been phenomenal in his 1st year in the AUDL. Best is providing that much needed consistency and poise to our O-line that hasn’t seemed to waiver yet this season.”

He added, “When our O-line is being anchored down from the handler set with rock-solid play from guys like Jon Mast, Thomas Edmonds and Mark Fedorenko, and then you add a down-field cutter who creates havoc on defenses, doesn’t turn the disc, and makes plays when the opportunity is there…it’s a winning formula.”

Detroit’s offense is lead by Andrew Sjogren with 18 goals in five matchups. David Innis helps to facilitate play with 283 receptions and 326 completions. Kevin Coulter, who missed the contest in Pittsburgh, owns 18 assists and is on the active roster this weekend at the league website.

Joe Cubitt and Mark Whitton each bring seven blocks to the score sheet. Cubbit leads in minutes played with 230 and is second in assists with 15. He is Detroit’s selection to participate in the All-Star Game.

Coming into this match, the Mechanix is the only team without a victory. The Seattle Cascades, Montreal Royal, Ottawa Outlaws, and the Austin Sol all picked up one win so far in the 2019 campaign.

My Prediction: I believe Kenny Furdella, Jon Mast, Steve Mogielski, Owen Watt, Jack Hefferon, and Alex Thomas will help the T-birds get their first win on the road, a 22-17 triumph. If you make the trip to the Great Lakes State, you can purchase your seats online.

Other Voices: Matt Rezin feels the players to watch in this rematch are Thomas Edmonds for Pittsburgh and Whitton for Detroit. Edmonds supplied six goals in the first meeting on Saturday, May 18, in the Burgh. Whitton is second on his team with 15 goals and is first in plus/minus at +23.

Adam Ruffner lifted the Thunderbirds five slots this week to No. 11 in the AUDL Power Rankings and likes their overall work ethic and focus on defense. The Mechanix set their toolboxes down at No. 21 in the survey. Their 23.20 turnovers per contest have them at 18 out of 21 teams in the league.

Going over the tote boards at Massey Ratings, the T-birds are settled in No. 20 while the Men of the Motor City rest at 21 this week. The Ultimate followers at Massy think the Men from the City of Bridges are going to assemble a 23-20 win.

Weather: The vigilant sky watchers at weather.com are projecting cloudy skies in Michigan with a 35 to 45 percent chance of showers for game day. The high to begin the match should be 73 degrees with a low of 64 by 9:00 p.m. Winds start from the west to southwest and swing around to the north by northwest at seven to nine mph. Click on the link for updates.

Next Up: The T-birds are taking a break as the premier AUDL All-Star Game is Saturday, June 8, 2019, at historic Breese Stevens Field in Wisconsin, home of the Madison Radicals. The ultimate competition starts at 7:00 p.m. CDT.

Pittsburgh is back on the field Saturday, June 22, when they welcome the first-place Madison Radicals (4-2) to JC Stone Field for a rematch from the season opener in the Badger State.