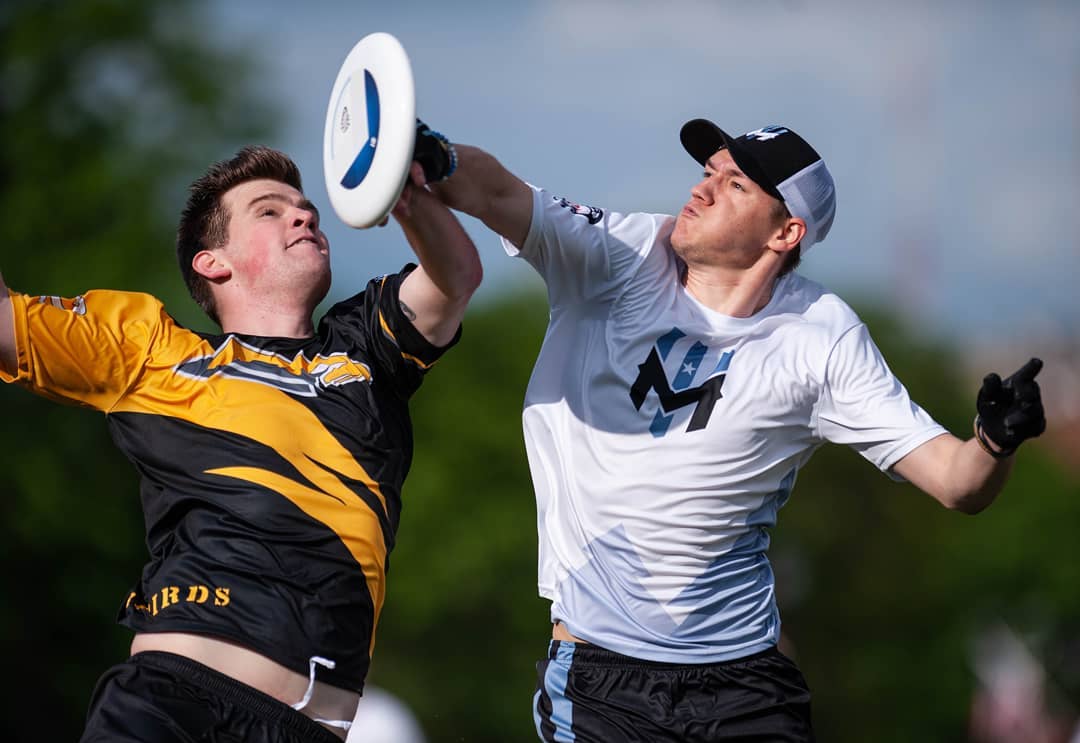 It was a hot and humid Saturday, more like August than May, when the Minnesota Wind Chill dropped into Da Burgh. A busy weekend for ultimate, too, with the beach ultimate championships happening in Virginia Beach and, on the college level, Division III championships taking place in Rockford, Illinois.

That's not enough to stop our ‘Birds and our die-hard fans from taking up roost in Rooney Field for a game. Of course it's not; while the Pittsburgh Thunderbirds have struggled so far this season, they're still putting on a show that is worth turning out for.

The game started off with some immediate turnovers, first by the Birds, then by the Wind Chill, and finally by Scott Trimble, whose block began a run that ended with Jordan Robarge setting Jimmy Towle up for his 27th goal of the season.

Twenty-seven goals on the season. It shows that despite the Thunderbirds' lack of marks in the win column this year, there's still plenty to cheer for.

Unfortunately, this Minnesota team decided to show us why they are in the third place in the Midwest Division, and by end of the first quarter, they had a lead of 10-3 after some acrobatic play and a lot of turns—and a quick rain shower that seemed to only affect part of the field.

The second quarter started with the Thunderbirds receiving the pull and scoring right off the bat. Longtime ‘Bird Max Sheppard slipped around a Wind Chill player who had better position and caught the disc for the most exciting play, so far, of the game.

This isn't a team that's willing to stay down, or maybe they just like to battle back, because Felipe Delgado threw one to David Angeletti. This didn't mean the Birds were totally back in it even when they get three unanswered goals on a Minnesota team that refused to take the hint and instead answered with a two-throw goal.

Mark Fedorenko answered with one of his trademark long throws to Kenny Furdella, but the Wind Chill didn't like that and answered with a goal of their own. It's awhile before anything exciting happened, but of course when that changed, it was the 'Birds who were responsible, with Towle assisting on a Sheppard goal. It's not enough to slow the Wind Chill, though, even when Alex Thomas took a disc from Trimble to make it 15-9.

If you like lots of scoring and you weren't here for this game, you missed a doozy, including a rare Greatest play that unfortunately didn't find a receiver. Another stat is that the half ended with a score of 16-9, still in the Wind Chill's favor.

The third quarter didn't start off nearly as well as the second, with the Birds tipping the disc for a D, and then immediately returning it to Minnesota on the goal line, and who can resist that gift? Not the Wind Chill! As loyal as we are to our ‘Birds, we don't blame the Chill. In fact, they put up two more before Robarge teamed up with Thomas to get one in. Minnesota began to pull away, but they could only inch forward on the scoreboard, with Sheppard finding a diving Furdella; a huge D from Fedorenko that resulted in Adnan Raslan's first goal as a Thunderbird; and a few more exciting plays, both of the defensive variety, and another couple of goals.

Let's be honest: This was a hard quarter for Thunderbird fans to watch, but our team stayed cool and patient, if a little tense, but they continued to work the disc with focus and attention to teamwork. With 25 seconds left, Thomas made a great D that ended with Patrick McMullen catching one from Robarge. Alas, the deficit was now a ten-point gap, and there was only one quarter left to go. Some holes seem insurmountable, and this was one.

However, you know a team's truly from Pittsburgh when they show the classic traits of a Pittsburgher: grit, determination, and heart. Owen Watt opened the scoring in the fourth quarter by throwing one to eventual player of the game Furdella.

But to be up in the top half of the division's standings, you have to be consistent and make good decisions, and the Wind Chill certainly delivered both of those qualities. That didn't stop Sheppard from connecting to Towle.

Regrettably, two breaks let Minnesota pull ahead even further, although Ethan Beardsley found Furdella in the end zone for the Thunderbirds' 18th goal. Fedorenko put one up for Watt, but the score at that point was 19-30, with only five minutes to go. How does a team not pack it in at this point and do everything possible to run the clock down and end the bloodbath, especially as the Wind Chill continued to pad their lead? The Chill seemed to excel at moving up the force side on the Birds, and it's easy to see how nights like this can be demoralizing.

David Vatz didn't agree with my nose-diving spirits because he assisted on a goal to Beardsley, but my favorite goal of the night was Sheppard finding Furdella yet again. Not because it changed out the outcome but because it was a buzzer beater, proving that Thunderbirds don't give up.

Even with an end score of 21-33, there were enough signs of good things to come to keep even the most pessimistic among us happy. Pat Hammonds' team will find their stride and their luck any game now.

Speaking of any game now, don't forget to come out to see the Supercell on June 3 and return to Rooney Field for our cross-divisional game against the DC Breeze and Thunderbirds alum Xavier Maxstadt on June 3. We'll catch up again then, but until then, Go Thunderbirds!