BY: CHRIS CASSELLA
We’ve heard of the Itsy-Bitsy Spider—the famed, lone arachnid who scaled waterspout only to be washed away by a rainstorm. But, while in the nursery rhyme the sun shines to clear the spider’s path, the San Jose Spiders did not have the similar good fortune this past Saturday. Instead of moving up in the western conference rankings, they fell to the Austin Sol 25-15. This brings Austin’s overall record to 6-5, and 4-1 at home, as the Sol approaches the final game of their storied season.

After a tough loss last weekend to the San Diego Growlers, the Sol put on a show for their home fans. Sol veterans and rookies alike gave impressive performances. Second-year player Eric Brodbeck had the highest +/- on the roster with six goals, two assists, and one block. Five Sol rookies had two blocks on defense, and thirteen players had 100% completion percentage. Simultaneously, the Sol played with the intensity of an underdog and the poise of a championship-level team. 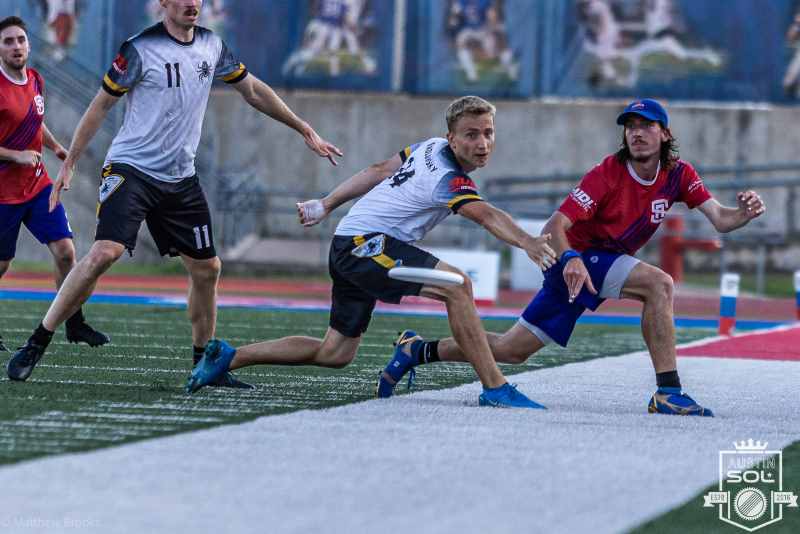 The combination of the heat and the home crowd proved too much for the visiting San Jose team. The Sol fans had their team’s back the whole game. There were roars from the bleachers with the start of each pull and loud cheers with catch of each goal. The loyal base who has stuck with this team the whole season created an atmosphere ripe for a Sol win. Hopefully, everyone’s voice recovers before the next game this Saturday.

Looking forward, the Sol are not done with their season. A team that started with prospects of just competing in the western conference now have a chance to punch a ticket to the playoffs, something few saw as a possibility at the start of this season. And there no better way to wrap out this season than where it all began, a home game against the second-seeded Dallas Roughnecks. Call it what you will: a rubber match, the Texas Championship, the be-all-end-all the AUDL season. Regardless, it is sure to be a good game.

This win against San Jose demonstrated that losses are never forgotten, regardless of where these losses fall in the season; if on-field perfection is the goal, then learning from past failures is critical to success. The Sol have shown week in and week out that they are a legitimate program with a loyal fanbase. And now, the Sol has one more guaranteed opportunity to show their fans and the whole league how a team with an underdog spirit can rise to be a title contender.