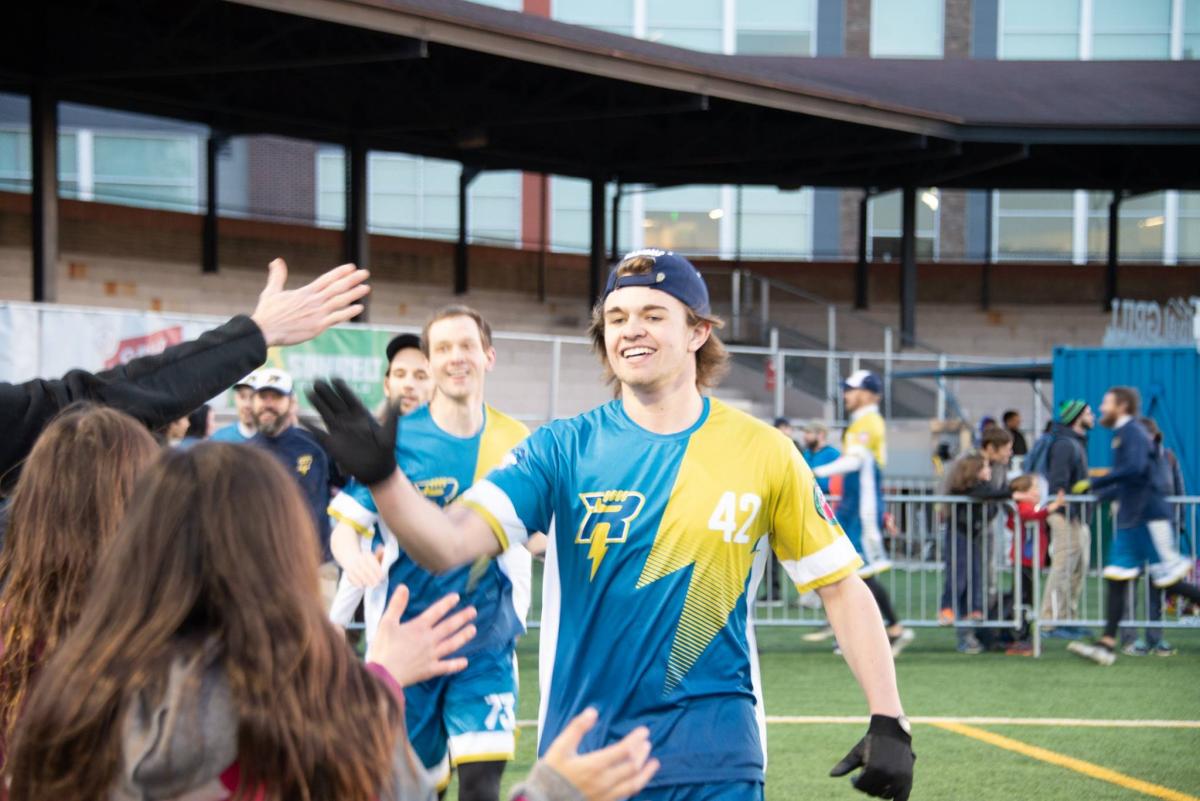 The Madison Radicals (5-0) were all business in their 37-8 dismantling of the Detroit Mechanix (0-6) at Breese Stevens Field this afternoon. The win set the Madison franchise records for both lowest opponent point total and largest margin of victory. The Radicals finished with a 2018 league-high 30 blocks on the game as a team. Madison has allowed just 65 goals in their first five games this season.

But the most historic part of today's game was the Radicals debut of Robyn Wiseman, the first woman to play professional ultimate for Madison. A longtime local ultimate legend and international competitor, Wiseman's play throughout the game was accompanied by a loud chorus of hundreds of fans whenever she touched the disc. Midway through the fourth quarter, a special moment happened when longtime Radical Dave Wiseman found partner Robyn in the corner of the endzone for her first score as a pro.

The win came in a total team effort as six different players threw 3+ assists, 11 different players scored two or more goals, and nine different Radicals defenders registered multiple blocks on the game. As a team, the Radicals completed 211-of-223 throws, good for 95 percent. After sprinting to a 6-3 lead early in the first quarter, Madison then played arguably its most dominant stretch of ultimate to date, outscoring Detroit 22-3 on a run that roughly lasted the next three quarters. The defense has been so dominant so far this season, its members are actually leading the club in scoring. First year player Nate Bosscher leads the team with 14 assists, Logan Pruess leads the team in touches with 131 (and is second in assists at 11), while Sterling Knoche's six-goal outing today upped his season total to a Radicals best 16. The team is sporting a +68 scoring margin in 2018.

Next weekend Madison will face a serious challenge as they head on the road to face the Chicago Wildfire (2-2) in the AUDL Game of the Week on Saturday, May 19. An official team watch party will be held in downtown Madison at The Brass Ring, the official bar of the Madison Radicals. The game will also be available to watch online, or on your local WIFS-4 (57-4) television station.

A note to leave on:

#thefutureisfemale I can’t express how I feel right now. I mean, I am not super satisfied with how I played; I seriously almost vomited three separate times from being so nervous. I can’t believe how many young girls came out to this @madisonradicals game today. I got to talk to so many girls who watch and play ultimate. I feel so lucky to be in Madison and to play for this community. I am so proud to be born and raised in Wisconsin and get the opportunity to show how ultimate has empowered me and given me so much confidence and happiness. I am so thankful that @dawiseman21 was my teammate who threw me my first point. To share this experience with him is incredible. Someone asked me, “What did you say to him after you scored?” All I said was, “I love you so much.” Yes, I was open, but it was perfect. It has been an amazing day. Thank you. I am so lucky and the opportunity is not lost on me #allthefeels #audl