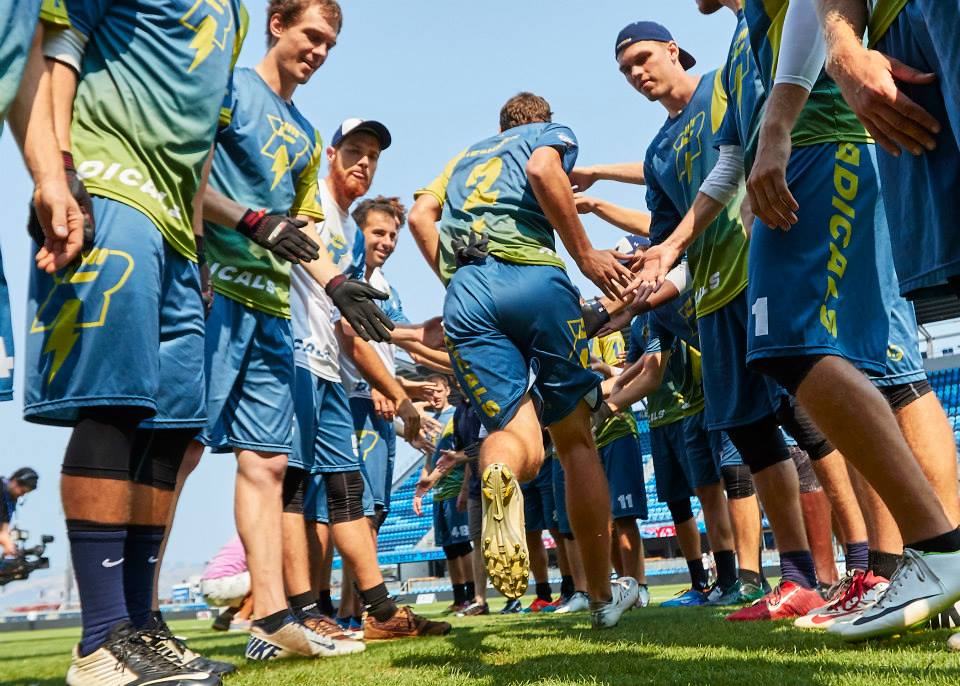 Andrew Meshnick shows up an hour and a half before game time for a Madison Radicals defensive line strategy meeting. It’s his sixth year in the league and by now he’s been to nearly 100 of these meetings—he’s never been late or missed one for a game in which he’s playing. He quietly enters the stadium and unassumingly prepares himself for what’s ahead.

If you didn’t see him coming, you would not know he was there. But that’s the way Meshnick prefers it.

When the Radicals formed as an AUDL team in 2013, Meshnick was a late pickup, having spent the first half of the professional season still in school helping the University of Wisconsin-Madison club team to a national championship tournament appearance. Despite the limited playing time—he played just 109 points in his rookie season—Meshnick assimilated seamlessly into the D-line ranks and Head Coach Tim DeByl immediately saw the potential of this young rising star.

"The thing I remember most about Meshnick in year one was his instincts,” DeByl said. “There are some things as a coach that you know you can't teach. His ability get a piece of a disc is just really unique. I remember him getting a foot block on [veteran handler] Ron Kubalanza in Chicago, that was just something that doesn't happen."

In 2014, Meshnick had a breakout season. As a member of the defensive unit, Meshnick exceled as both a coverage defender and in leading the Radicals counterattack off of turnovers. In his first full season as a pro, Meshnick racked up 32 blocks, finishing in the top five in the league; he also registered in the top three on the Madison team in goals, assists, and blocks. And although my 49 blocks from that season set a single-season league record, I cannot tell you how many of them I owe to Meshnick’s tenacity on the mark.

Meshnick defended at the point of attack as a member of our 2-4-1 Radicals zone, routinely stifling opposing handlers on the mark with his singular mix of length, athleticism, stamina, and timing. Opposing teams averaged 16.5 goals per game against the Radicals in 2014, the lowest in the AUDL that season. His defensive dominance and consistency—Meshnick played logged 294 points played while appearing in all 14 Radicals regular season games—helped propel Madison to a Midwest Division crown, and a Championship Weekend appearance.

Meshnick’s name and playing style were becoming renowned, and he was only getting started. 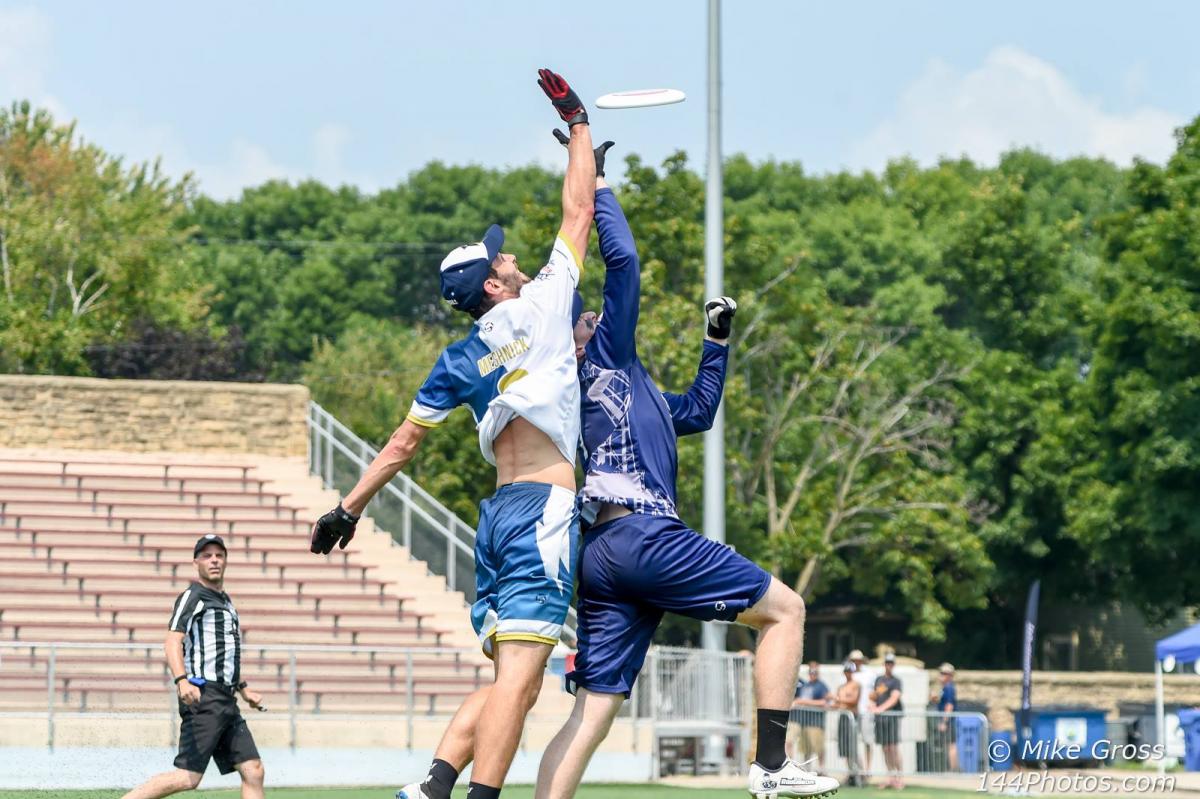 In 2015, Meshnick once again helped lead the league’s toughest defense. During the regular season, the Radicals again allowed the fewest goals by any team in the AUDL (16.9). Meshnick became the first (and only) Radicals player to achieve a 30-goal, 30-assists, 30-block season during 2015, posting a plus/minus of +66 and leading the team in assists and blocks, while scoring the second most goals on the team. His 32 blocks were tied for the most in the league during the regular season. Again.

Meshnick’s defensive play style is one of misdirection and high ultimate IQ. He would routinely bait throwers into taking what they perceived to be open looks—both under or deep—at which point he would seemingly materialize out of thin air to make the play. His heads-up strategy paid off more often than not, as teams were frequently frustrated by his ability to conjure blocks. 2015 also offered a glimpse into Meshnick’s abilities on offense. As his skills with the disc grew, his lethality in scoring and assisting goals increased, punishing offenses for committing turnovers. Meshnick played 377 points in 14 games during the regular season, earning another Steel Spirit award and guiding us to another championship game appearance against the San Jose Spiders.

2016 and 2017 were more of the same for the Radicals. Each year, the team led the league in goals allowed (16.5 and 18.5 goals/game, respectively), but we came up just short of winning our first title. However, Meshnick continued to have unparalleled success on the team and across the league, leading the team in goals in 2016, and assists and blocks in 2017. He was also among the top five leaders in blocks in the AUDL both seasons, maintaining Madison’s reputation as the most fearsome defense. He led Madison in points played as well through both seasons, earning a third Steel Spirit award in 2016. 2017 marked the first year in the previous four that Meshnick did not play every game for the team. Regardless, during the 2017 season, Meshnick surpassed the 100G/100A/100D mark for his regular season career—an accomplishment reached by only two other players in AUDL history at that time, and five total to this day.

The 2018 AUDL season represented the culmination of everything the Radicals had worked toward since the team’s inception. The veteran leadership was balanced by talented new recruits, and the years of practice and team cohesion paved the way to a fifth-straight Midwest Division title and a 2018 AUDL championship. Despite playing the second fewest points during the regular season of his career, Meshnick led the Radicals in blocks (20), and was top five in the league in blocks for (this is getting repetitive) the top ranked defense. His mentorship of young defenders paid off as players like Logan Pruess, Sterling Knoche, and Kyle Weigand were significant difference makers throughout the season and deep into the playoffs. 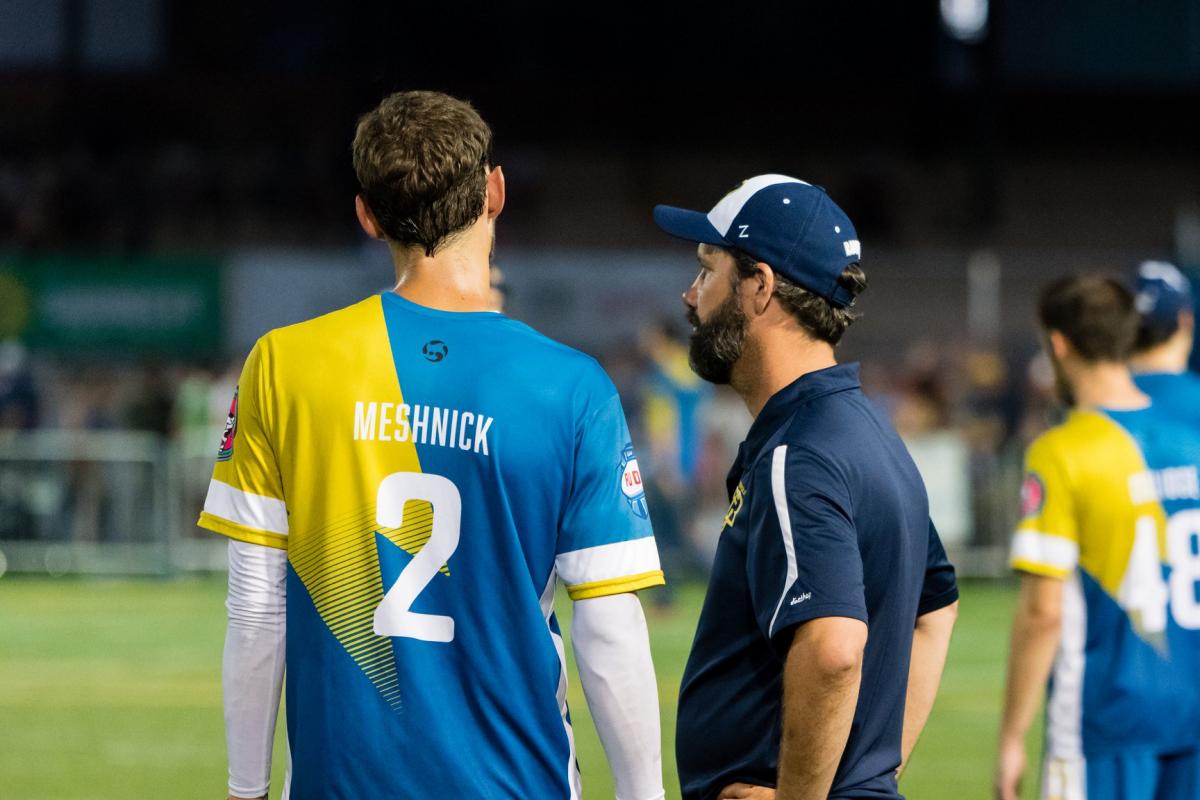 The Radicals defense proved to be too much to handle during semis and finals, limiting both the Los Angeles Aviators and the Dallas Roughnecks to 20 points or less. Under the sweltering heat of an August sun, the Radicals exhausted a normally high-powered Roughnecks offense by playing tenacious and heads-up defense, poaching lanes, switching downfield, and creating blocks out of thin air. Meshnick led the team with two blocks in the final, and his brand of play and mentorship were on display—everyone on the roster made plays, within the system, to help take home the championship trophy.

It can be difficult to characterize the impact that one person has on a team, but it is impossible to ignore the benefit a team can have from a high-caliber player like Andrew Meshnick. Since his first full year on the team (2014), the Radicals have been the top ranked defense for goals allowed in a season, with the highest season average being 18.5 goals/game in 2017 (which coincidentally was the year he played the fewest regular season games). He is one of fewer than 10 players in the history of the AUDL to record a 30G/30A/30D season, one of 5 players to ever achieve a career 100G/100A/100D, and he is tied for the AUDL record for most blocks in a game (8). On the Radicals, he has the record for most goals in a regular season game (10), most points played in a regular season (403), most points played in a career (1,771), and most points played in the playoffs (310). Since 2014, Meshnick has recorded 20 blocks or more per season with 137 career regular season blocks, which ranks third among all AUDL players. He has been nominated for multiple All-AUDL teams, and has been featured on ESPN’s SportsCenter Top 10 Plays.

I spent the last 1,000+ words detailing all of these accomplishments because, frankly, he will never tell you any of the above—he’s a bit too quiet, too down-to-earth, too good a person to ever let himself take priority over the team.

I have had the distinct honor and privilege to get to play with Meshnick over the past five years, and enough cannot be said about the contribution he has provided to the ultimate community in Madison and on the Radicals. He is the epitome of humility, leadership, and being a teammate.

It is surprising how quickly your playing years fly by—just a few years ago we were the young ones on the team and now we are the savvy veterans. But regardless of what future seasons hold, Meshnick’s legacy will remain long after he hangs up his cleats.

Even if you didn’t see it coming. 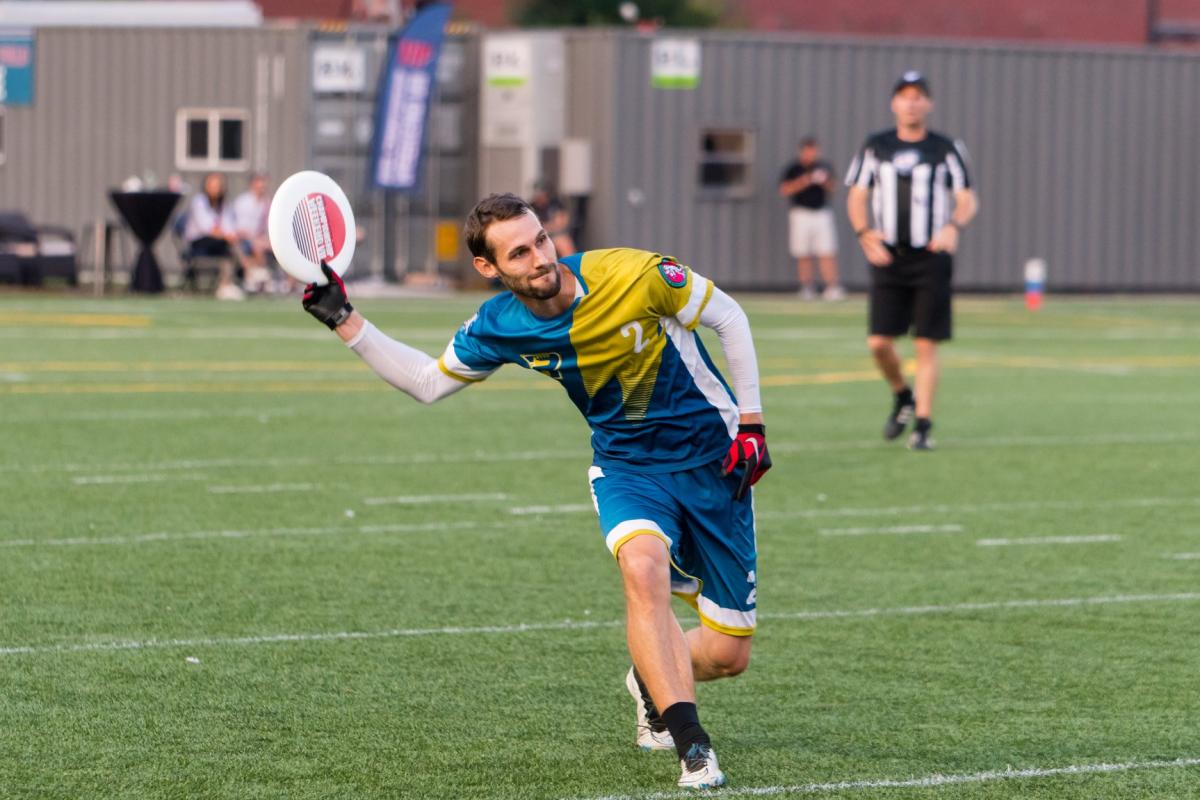 Get Season Tickets! / Starting at $40
2022 Rad Academy / Sign Up Today!
Podcast / Check out Charged Up
Join our Email List / Get Deals