The Women Behind the Phoenix Rising | AUDL
Skip to main content 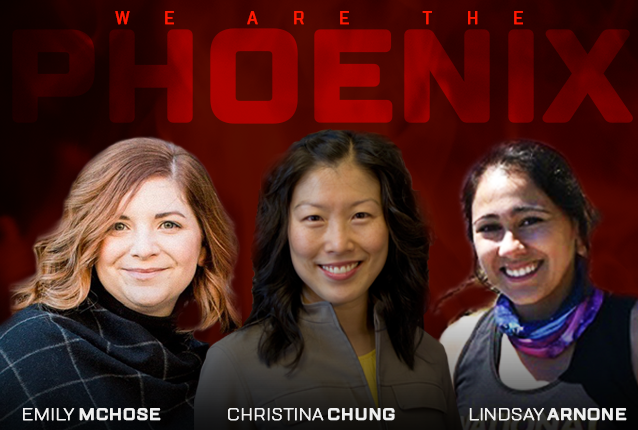 Aside from striving to be the best in ultimate, a large component of the Philadelphia Phoenix’s mission is to be an ally to others – including promoting opportunities for women within the sports industry. Women are still significantly underrepresented in sports, from on the field to in the office. The Phoenix is proud to be making strides of change in this area. The franchise’s five-person operations team includes three women, all in positions of leadership.

Dr. Christina Lee Chung, Managing Partner, President and CEO, came to the Phoenix as a new majority stake owner in the franchise, along with her husband, Dr. Jeff George. Chung was introduced to the world of ultimate through her relationship with George. As a lifelong athlete she was immediately drawn to the dynamic play and technical rigor of ultimate. She began playing in 2004 in the Philadelphia Area Disc Alliance, and even co-captained with George for three seasons – leading to top place finishes for their team.

As a first-generation Korean-American woman, Chung was motivated to use the Phoenix as a vehicle for change, being the visionary behind the Phoenix’s new mission. “I knew if I was going to take on ownership of the team it was an opportunity to create change. I want to create a workplace environment for women to succeed, supporting one another. It is incredibly inspiring to be part of innovation in sports in all levels,” said Chung.

Alongside overseeing Phoenix operations and the administration team, Chung is an internationally recognized dermatologist specializing in skin cancer arising in organ transplant recipients and people of color. She practices dermatology in the Philadelphia area as well as engages in aging research.

The Phoenix’s Director of Marketing and Communications, Emily McHose, joined the franchise during the transition into the new ownership group. She was relatively unfamiliar with the world of ultimate, knowing little about the sport, aside from pickup games she saw played while in college. With a background in branding, public relations and advertising McHose used her knowledge and skill to refresh the Phoenix brand, modernizing imagery and better communicating the brand to fans.

As an outsider to the world of ultimate she brought a different perspective to the table. “There certainly has been a bit of a learning curve coming from outside the ultimate community, but by bringing a fresh set of eyes to the team I feel it enabled us to really focus on who we are as a franchise, what we want to accomplish and the best way to reach fans, both loyal and new,” said McHose. She has spent the past decade working with various clients to best represent themselves and their companies. McHose currently oversees all marketing and communications efforts for the Phoenix.

Game Day Coordinator, Lindsay Arnone, has worked with the Phoenix from the beginning. She began playing ultimate as a freshman at Bloomsburg University in 2007. Over years of involvement Arnone has developed a rich history in the ultimate community. She co-founded the Arcadia Ultimate Program at Arcadia University, serving as captain and later coaching the team. Arnone also co-founded club team, Broad City, now in its third year, having served as captain in the first year. She has played for various club teams over the years, and actively participates the Philadelphia Area Disc Alliance.

Arnone held various roles throughout the Phoenix organization, from writer to general manager, and credits her work with the Phoenix for leading her to a career in event management at Xfinitiy Live!. Her passion and commitment to ultimate is evident, Arnone said, “Ultimate demands a strong sense of self and dedication, and that is why I cannot give anything less than 100%. I hope the Phoenix become a staple in the AUDL, and I am happy to keep working to see that come true.” Arnone coordinates all game day activities and operations for the Phoenix.

The Phoenix host the Toronto Rush on Sunday, May 19. Tickets and season packages are available here.