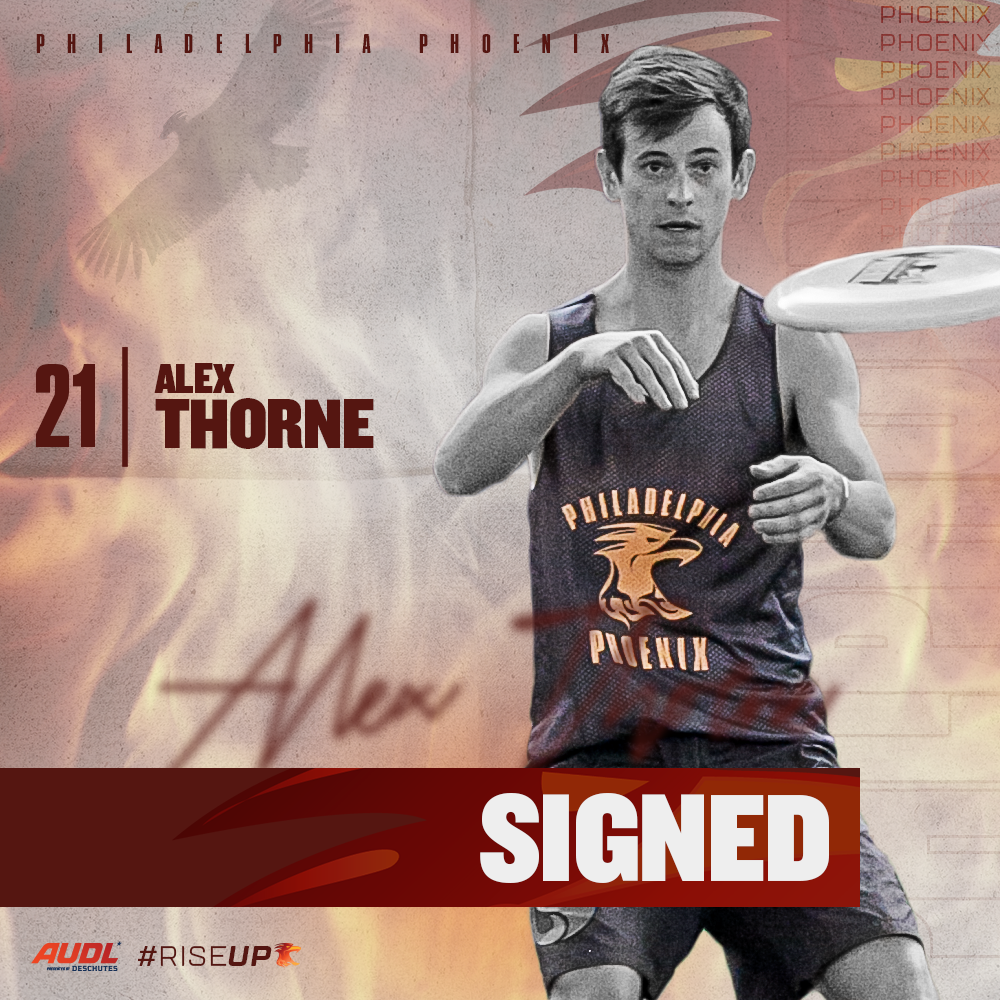 PHILADELPHIA — The Philadelphia Phoenix signed handler Alex Thorne to the 2020 roster, marking his return to the AUDL as a newcomer to the Phoenix squad. Thorne’s history in ultimate runs deep, after his days with the Pittsburgh High School Ultimate League he went on to play for University of Pittsburgh, USA National Team, various US and European clubs and eventually the AUDL. He is one of the most accomplished players to sign with the team this season, touting two College National Championships as well as a European Championship and World Championship among other achievements. The 29-year-old veteran is ready for his next ultimate challenge, Thorne said, “I'm excited to suit up for Philly, it's my new home and I haven't played competitively here yet. It's also going to be an exciting season in the league with all of the divisional changes.”

There is no doubt fans and teammates alike will look for Thorne to replicate his excellent performances of years past. In 2016 he averaged 4.5 Assists Per Game, with an efficient 92% Completion Rating, numbers comparable to the production of Phoenix teammate Sean Mott in his All-Star 2019 season (4.3 APG, 91% CR).

The excellence of Thorne’s game is defined by his throwing prowess, which opens every corner of the field for his team’s cutters. General Manager, Jeff George noted Thorne’s abilities are a perfect match for Phoenix’s returning roster, which is already filled with tall, athletic receiving targets. “Alex is a great addition [to the team],” said George, “He brings experience, confidence and a skill set that compliments the foundation we’ve built over the past few seasons.”

For Thorne, the start of the 2020 season this spring marks the end of a four-year hiatus from the AUDL field. He made his professional debut in 2014 with the DC Breeze, followed by two seasons with the Pittsburgh Thunderbirds. Both teams will now stand as frequent opponents for the Phoenix in the AUDL’s newly formed Atlantic Division. Thorne has high expectations for Philadelphia this season. “I'm a competitor,” said Thorne, “I want to be in the playoffs and I definitely think that's what this team should be shooting for.”

Get your 2020 Season Tickets to see the Phoenix take flight this spring, on sale now.