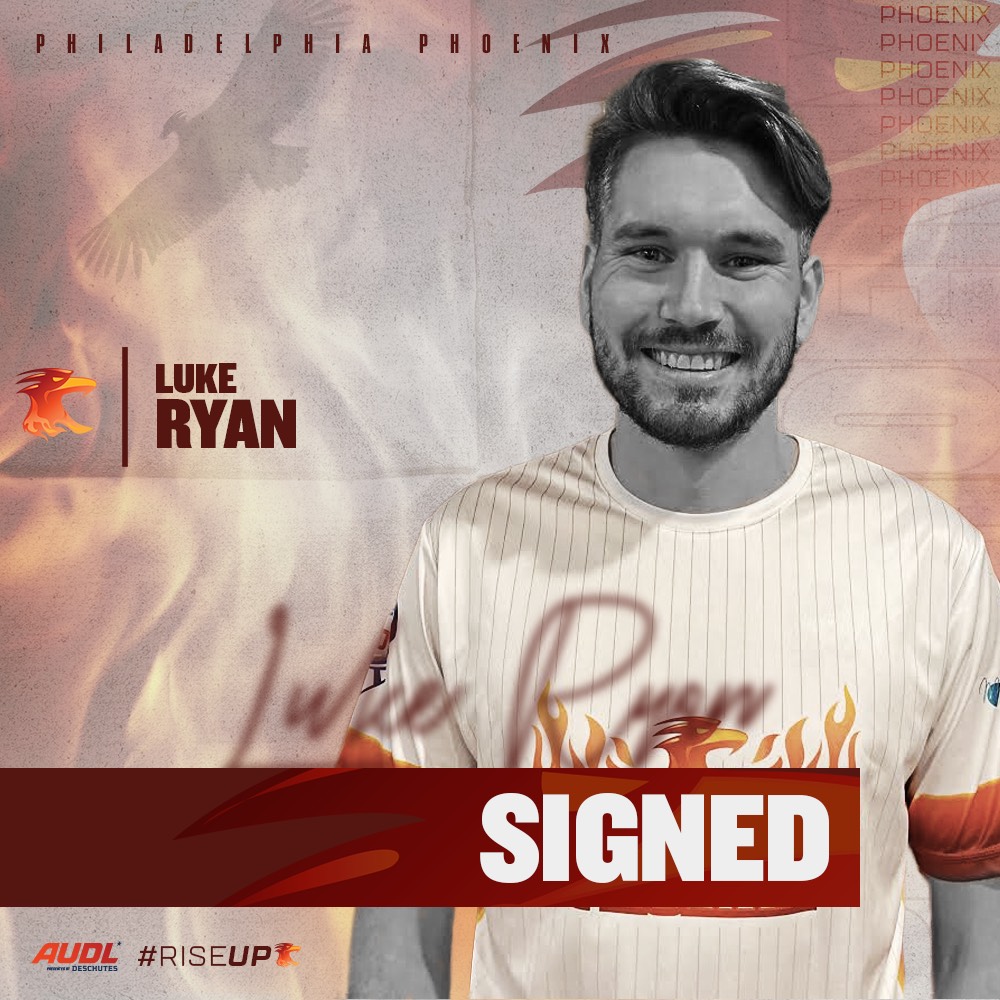 PHILADELPHIA — The Philadelphia Phoenix signed Luke Ryan for the 2020 AUDL season. The 28-year-old Ryan will make his professional debut with the Phoenix this spring. Although he is an AUDL rookie, he brings excellent talent and years of competitive experience to the field, having recently won back-to-back championships at the club level with Philadelphia coed team, Amp.

In 2009, Ryan relocated to the Philadelphia area from his hometown of Maplewood, NJ to attend St. Joseph’s University. He became familiar with ultimate as a young child in elementary school, having grown up in the very birthplace of the sport, though Ryan did not play competitively until his junior year in college. There his love for ultimate grew, with the game’s fast, exciting play; unique approach to sportsmanship; and player communication. “My favorite thing about the sport is the combination of competitiveness and community,” said Ryan. Spirit of the Game is so integral to Ryan that he has served as a club team spirit captain in past seasons.

Both his team-focused attitude and athletic aptitude had Phoenix coaching staff interested in bringing Ryan to the AUDL field. Standing at just over 6-feet, he is known for his defensive prowess and explosive cutting ability. Ryan is skilled in playing both sides of the disc, his incredible speed and audacious dives allow him to close-in or create separation with ease. Phoenix coaches expect him to be an integral component of their 2020 defensive schemes, with Ryan able to produce blocks, stifle opposing cutters and generate break scores after securing possession of the disc. “Luke has exceptional cutting ability, specifically his ability to initiate and facilitate flow on offense is a special talent. He is a dangerous deep cutter with great hands and he simply has a knack for the endzone.” said General Manager, Jeff George. “Luke’s intensity should raise the overall play of the Phoenix. He should be able to fill multiple roles depending on what the coaches need from him, and will add to what is looking like an impressive defensive lineup.”

The talented Philadelphia transplant is humble in approaching his role and new team. “Making the playoffs and establishing the Phoenix in the new division seems to be the goal for everyone coming into the season,” said Ryan. “Personally I don't have any specific goals or benchmarks for myself. I’m looking forward to doing what is asked of me by the coaches, captains and leadership.” Though in joining the Phoenix, Ryan is looking forward to honoring the place he has long called home. He said, “Philadelphia adopted me 10 years ago when I came to college here, and it's been my home ever since. I will never turn down an opportunity to represent this community and city.”