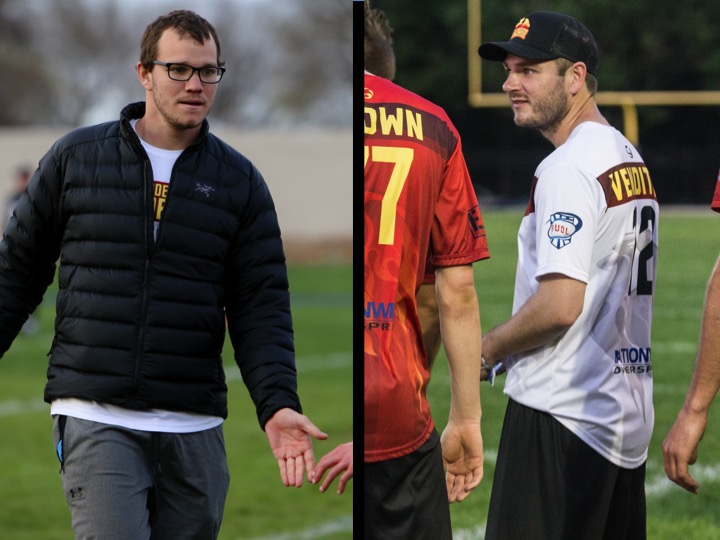 PHILA, PA -- With the 2019 AUDL season just a few months away, the Phoenix have announced the return of coaches David Hampson and Nate Venditta to lead the team in the new year. As assistant coaches in 2018, the pair split management of strategic realms, with Hampson as offensive coordinator and Vendita defensive. In their follow up to one of the most successful seasons in Phoenix history, Hampson will lead the coaching staff as Head Coach, with Venditta as Assistant.

Hampson, a former Phoenix himself, started his coaching career in 2015 soon after retiring from the AUDL as a player. He has since worked with both Women’s and Men’s teams at the University of Delaware, as well as the India’s national team at World competitions in 2016.

Reflecting on his experience with the Phoenix in 2018, Hampson most appreciated the strong relationships he was able to build with players, even those he’d competed against through in his own 8+ years as a player in the area. This positive experience, combined with a feeling of having some unfinished business, lead him to want to take the coaching helm in 2019.

“In 2018, we raised our level of play and won some really great games. We also lost a few I think we shouldn’t have. I’m a competitive person, and I want another shot at those opponents. I also loved the group we had last year. 2019 will be one of the first times we’ll have a solid core of players, coaches, and staff returning, and I’m excited to see how incoming player will contribute to that.”

Nate Venditta, also a former pro-league player and a veteran coach in lacrosse and baseball, shared similarly energized feelings from 2018, his first season with the Phoenix. “Being in the hunt for the playoffs up until the last game was an especially rewarding achievement. This team has changed and developed more in a year than most teams do in two or three years, and the 2019 season will be an even bigger step forward.”

In 2018, the Phoenix burst from the AUDL East “basement”, hounding opponents in search of a shot at postseason play. With only two games left in the regular season, they had an opportunity to unseat the New York Empire and claim the final East playoff spot, but fell just 1.5 games short.

Unsurprisingly, the competitive coaching duo both named the Empire as the opponent they most looked forward to meeting in 2019:

“For years they’ve tended to get the better of us, but it’s a matchup we’re capable of winning. Playing them is really fun because it’s such a tough fight. You know that they’re coming out to play physical and in-your-face.” - Hampson

“I’ve watched hours and hours more New York video than anything else over the last six months. Those games will be the first ones circled on my calendar.” - Venditta

Venditta brings a wealth of defensive experience and strategy that both coaches feel is a great compliment to Hampson’s offensive mindset. He also shares Hampson’s holistic approach to coaching, stressing the importance of building great camaraderie and team culture. “These athletes play for each other, and being a part of cultivating that family atmosphere might be the most important job for me on this team.”

Asked what he’s excited for as a 2019 coach, Venditta looked no further than the team’s January 26th open tryout event. “We will have more depth in talent on one field than Philly may have ever seen. The young players are hungry and I have no doubt they’ll surprise the coaching staff and veteran players there.”

The 2019 AUDL Season is set to begin in early April. Phoenix season tickets are available now.

Phoenix Open Tryouts will be hosted at Penn Park on Saturday, January 26th. Registration is available now and open to all ultimate players ages 18+.