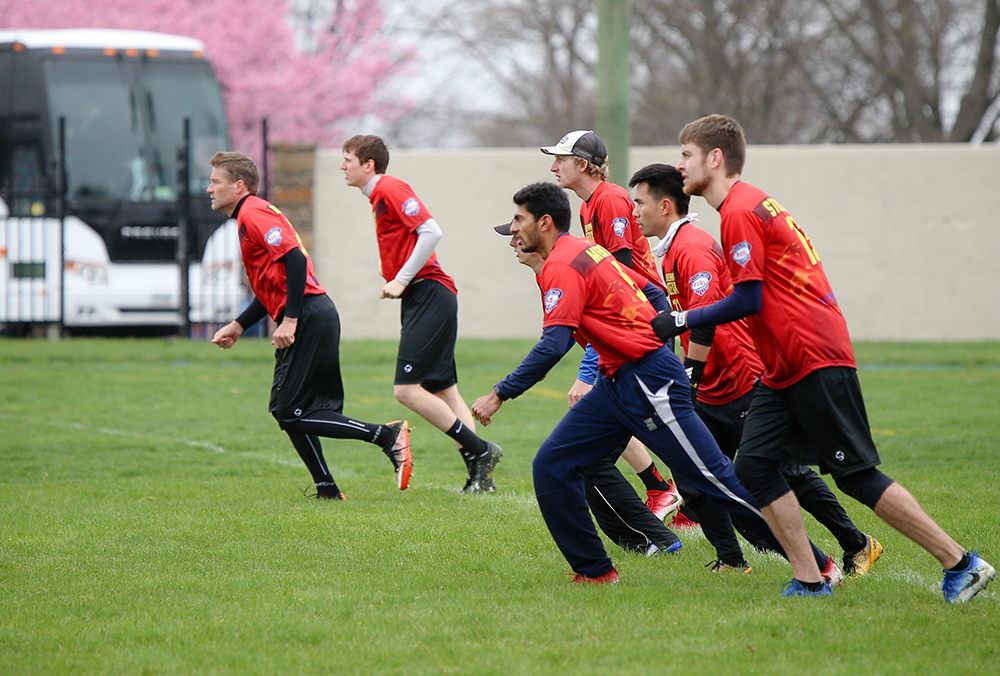 PHILA. PA - After getting rained out of their first meeting with the New York Empire, the Phoenix travel to New Rochelle to butt heads once again. The Empire remain the final team in the East Division the Phoenix have yet to face in a full match this season. Although the two teams only played for 10 points last Saturday before lightening got the better of plastic, the first quarter gave us some things to look forward to.

With Strousse’s injury, Ethan Fortin’s move to O line has led to a huge uptick in his usage and increased the amount of times Fortin and Peck get confused in the booth on account of both being named Ethan.  Strategically, this gives the Phoenix an added dimension, allowing Ethan Peck to use his height and athleticism to cut downfield. Xu and Fortin have definite chemistry in the backfield, and moving the Huck’em Chuck’em Ethan Peck to a cutting role let’s Philadelphia stretch the field even more.

The real story of the Philadelphia offense however is the dynamic breakout duo of Himalaya Mehta and Ethan Peck.  Mehta leads the team in goals and is tied for the sixth most goals in the league at 22. He was unstoppable in Canada, tacking up 13 goals on the two game road trip, and is a front runner for rookie of the year.  Peck, who leads the team in assists, is tied for ninth in the league with 25. Neither show any signs of slowing down, and if Philadelphia is to beat New York, they’ll need their two break out stars to show up huge.

Despite only playing a few points, New York’s strength was clearly their d line.  Jagt caught two break goals and threw an assist for the third, highlighting some gaps in the Philadelphia O line.  If Philly is going to turn the disc over, they need to make sure they take away the deep space or else New York’s lanky line of defenders will huck all over them.

New York’s defensive line has been wreaking havoc on teams all season, with young all stars like Babbit, Jibran Meiser, and Jagt taking away downfield space and then providing huge targets on break chances.  Philadelphia might be uniquely suited for an Eastern Division team to handle New York’s larger defenders. Philly averages 80.3 more throws than their opponents this season, and it comes from the coach, Trey Katzenbach, and his offensive style.  Philadelphia wants to work the disc underneath taking high percentage throws, and would rather throw a stall six dump than a hail mary to the goal line. Although the wet and windy condition forced mistakes last weekend, a locked in Philadelphia offense in ideal conditions will look to take on the Empire with a thousand bee stings in the form of dumps and in cuts, limiting some of the air superiority New York has wielded over the division.

Philadelphia’s defense came out firing, scoring the first points off a layout D by Matt Esser on Beau Kittredge of all people.  The savvy old guard of Baer and Reydams will look to control the pace of the defense, while Philadelphia’s slew of quick defenders will put pressure on a high octane Empire offensive roster.  Philadelphia’s defense plays much bigger than their size, and if New York thinks that they can chuck the frisbee for 50/50 balls, they’ll be shocked to find how up to the task Philly gets.

Saturday marks the new premier of the 3-game series these teams will play in 2018. The only prediction that can be made with certainty is that in a neck-and-neck East Division, these Philly-NY matchups will be a slog with huge playoff implications, potentially determining a champion to make a run at Toronto for the East Division crown this summer.