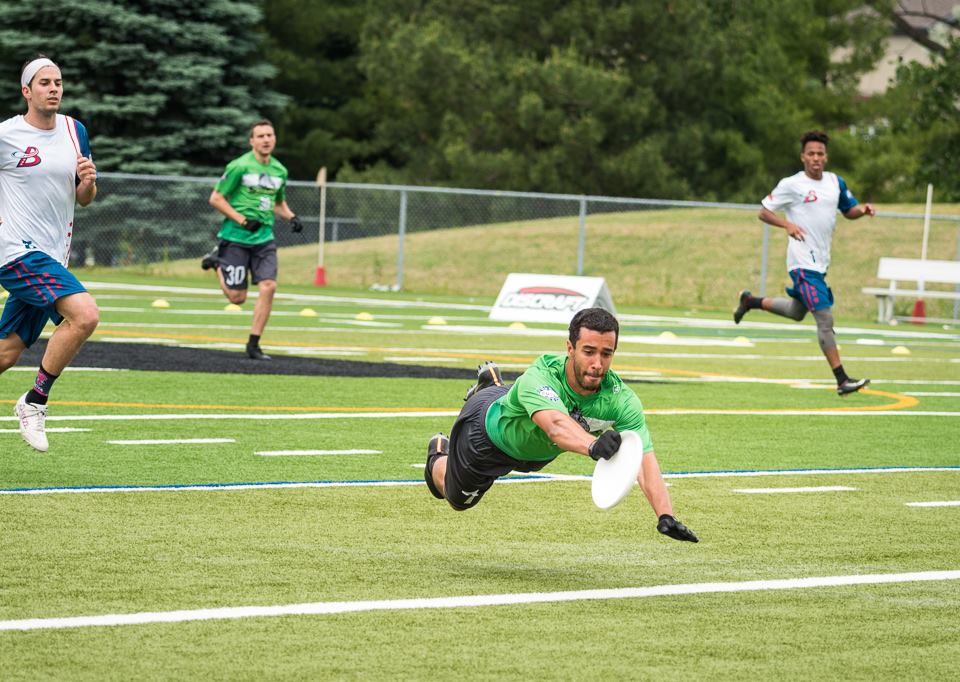 Despite beginning the 2018 season 0-3, the Outlaws are confident they are a far improved team. Much of their confidence derives from rostering two healthy Loiseau brothers, who are starting together on the Outlaws offensive unit.

The two brothers have never before been teammates on an organized sports team. Laurent was a soccer player, and Karl was a basketball player. The six-year age gap also meant that they rarely competed together, either on the same or opposing teams. When Laurent’s university soccer career ended, he was looking for a new sport, and his brother’s chosen sport of Ultimate caught his eye.

Laurent played his rookie AUDL season in 2016, but he was a defensive speedster while brother Karl was still a go-to cog on the offence. They never played a point together. Last year, Karl moved to France while Laurent projected to take several steps forward for the Outlaws. The team was thrilled about the prospect of Laurent stepping into Karl’s shoes, until injury struck.

“Laurent Loiseau has been putting in insane amount of work over the past two season. So last summer, it was looking like it was going to be [a big year for him], but he was unfortunately inured and couldn't play a lot of games... If he's healthy he can definitely turn into a gamebreaker for us,” explained team Captain Nick Boucher.

Meanwhile, Karl Loiseau was in Paris for work. Though his girlfriend practiced with the Parisian teams, Karl mostly took the summer off of Frisbee, spending weekends exploring the country. Upon returning to the Outlaws in 2018, he found his role had changed even if his game had not. No longer is he a deep cutter, with that role filled by Alec Arsenault and his brother. Instead, he has become an initiation cutter, getting early unders and looking deep to take shots. Laurent is being groomed to take over in Karl’s role from 2016.

Laurent may be better suited to the position of deep cutter than Karl. “I'm more of a shifty, quick player,” explained Karl. “He's a bit taller than I am. He's more of a powerful runner, just running big cuts, big strides, and then cutting back under really hard. In that sense, we play a little differently.”

On Saturday afternoon against the Montreal Royal, the Loiseau brothers finally played their first full game together, while completing the fairy tale of connecting on their first ever brother-brother goal. It came at the end of the second quarter, with Karl in trouble with the disc. He had no targets in sight and the quarter about to end. Rather than panic, the veteran heaved a hopeful disc into the endzone, and the little brother made a phenomenal play on the disc.

“I could see the time running down. If I remember, there was probably like 15, 20 seconds [left in the quarter],” said Karl. “I kind of had the disc right in the middle of the field, probably 20 yards out of the endzone, and I could see the defence, all the defence was kind of looking at me with the disc, so my brother just ran down into the endzone in the back corner. I put up a hammer that was high in the wind, but he came down with it in the endzone.”

By the time the game had finished, they had connected for four goals. Karl threw three assists to Laurent, while Laurent returned the favour once. “I gotta give it back to him,” laughed Laurent.

The Alexanders are an institution in Ottawa. Since the creation of the Outlaws in 2015, they have played a mammoth 396 points together. After one admittedly high-scoring game, the Loiseaus have reached the mountainous heights of 32 points played together.

If you’re wondering about brother sets in the AUDL, there are several outside of Ottawa. Matt and Mitchell Bennett have not had a chance to play together yet for the Austin Sol, separated by injuries and lines-placements. Mike and Iain MacKenzie have played 98 points together since 2017 for the Toronto Rush defence. Andrew and Kevin Brown have notched 147 together for the Madison Radicals since 2014, which seems low for two such important players until you realize that they are generally kept separate on the offensive and defensive lines. Dillon and Chris Larberg have combined for 175 points played together since the Dallas Roughnecks were conceived in 2016. However, not even the Alexanders can touch the brother-kings Mike and Ryan Drost, who have played 720 points together since 2014.

When pressed, though, all agreed that the Loiseaus add perhaps more dynamism to the team than the Alexanders – or at least make more plays in concert. When asked who comprised the better brother set, Derek happily admitted, “Right now, the Loiseau's for sure, no question! Their chemistry is noticeable, right? They're looking for each other out there on the field, and paint [discs] into good spots.”

Laurent agreed. “I would say us, for sure. The Alexanders are good, but they're getting old. Not reliable,” he joked. “I don't think [they pass to each other like we do]. They're both handlers. They have a bunch of small ball passes, but they don't have anything downfield. They don't throw hammers to each other.”

Though Karl is 30-years-old and Laurent already 24, they will make enormous strides together on the offence. Both are speedsters, able to fly downfield in the blink of an eye. The Ottawa offence, with both Loiseaus together, is only pointing in one direction. It may have taken Karl and Laurent lifetimes to finally play together, but with the first steps out of the way, expect success to reach them before you can call, ‘up.’