Heading into the final weekend of the regular season, there are three significant storylines involving postseason positioning. Two of them are fairly obvious, but the most important and more complex conversation might surprise you.

In the South and Central divisions, Austin and Indianapolis control their destiny, though it’s possible everything could be sorted out by the end of Friday night. Week 14 begins with a five-game Friday slate, including Tampa Bay at Austin and Chicago at Madison. If Austin can simply take care of business at home against the 1-9 Cannons, the Sol are in the playoffs and heading to Carolina on August 20. Meanwhile, Madison needs a home victory over 9-1 Chicago to remain alive for the final postseason spot in the Central. A Union triumph would certify the AlleyCats’ third place finish even before they take the field on Saturday. 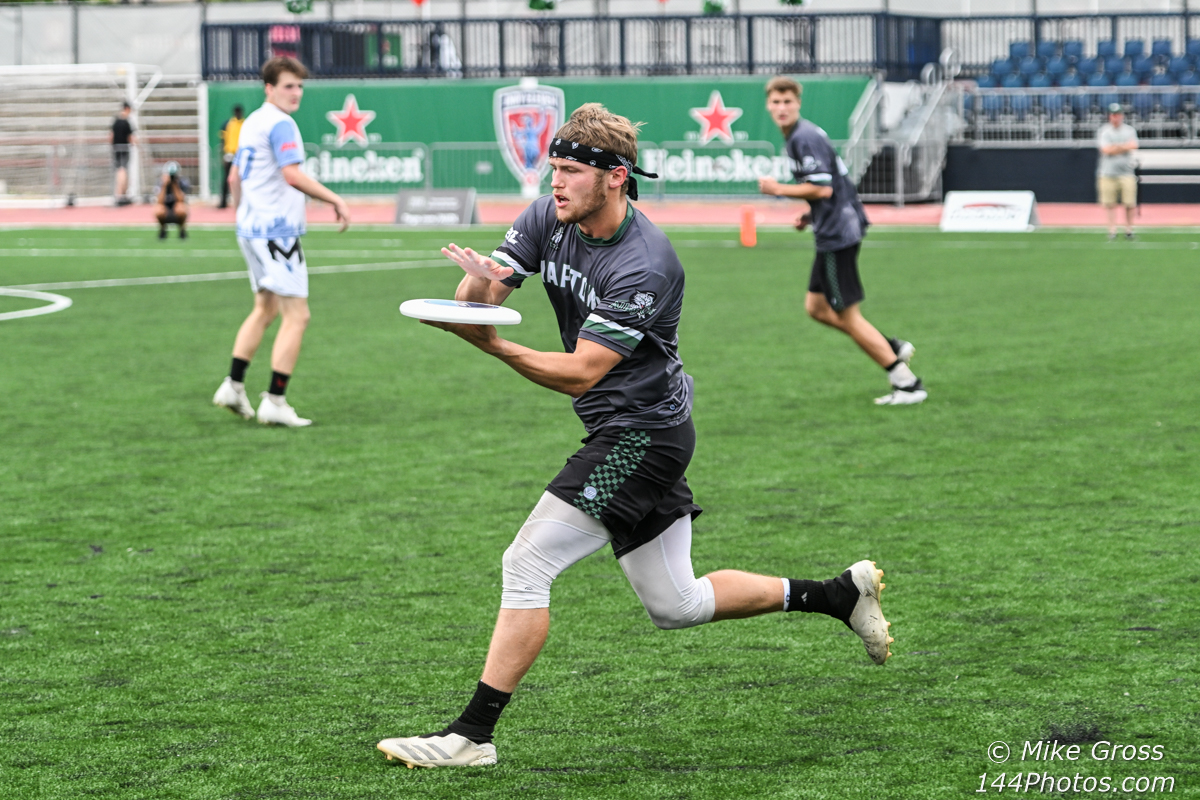 While very unlikely, the most interesting scenario would involve Tampa Bay and Madison both winning on Friday, which would then transform the rare interdivisional Indianapolis at Atlanta matchup into a must-win game for both teams. In this improbable event, the AlleyCats-Hustle victor would be playoff-bound, while the loser would be out, with either the Sol or the Radicals sneaking into the dance.

But the Indy-Atlanta matchup only becomes a showdown with unprecedented significance if both underdogs can somehow prevail on Friday. Frankly, I’d be shocked if it happened, but it would be incredible.

More relevant to the long-term landscape is the under-the-radar race for Championship Weekend seeding. No team is eager to talk publicly about this, considering it involves looking beyond a tough home playoff game against a formidable opponent, but it’ll definitely linger in the back of everyone’s mind over the course of the Week 14 schedule.

As a reminder, Championship Weekend is re-seeded based upon the regular season records of the four teams that make it. Consequently, if New York can win the East Division final, the 12-0 Empire will be the top seed. The other three divisions all have one loss teams at the top, and the order of the second, third, and fourth seeds could very well come down to just a couple goals. 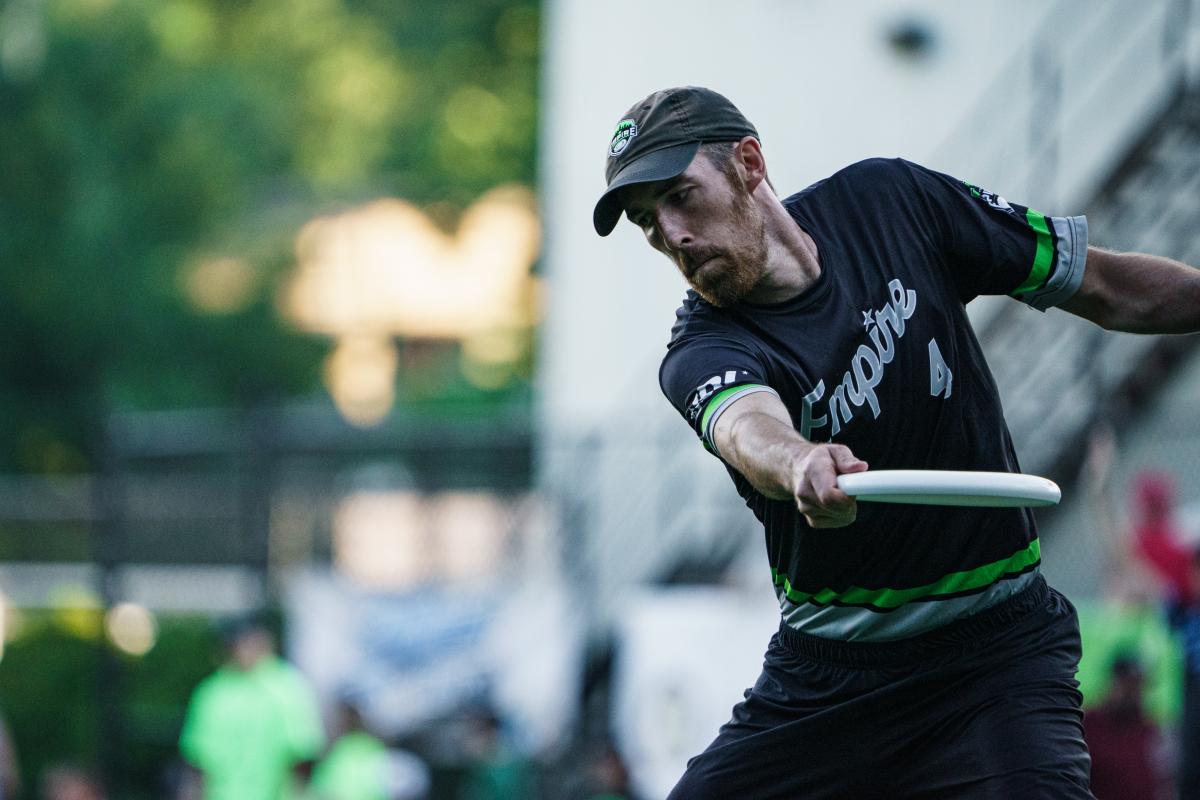 That’s the fascinating and sneaky storyline of Week 14. Colorado and Chicago may try to rout Portland and Detroit by the largest possible margins to avoid potentially seeing the undefeated Empire in the semifinal. Assuming the Summit and Union can both finish 11-1, it will come down to regular season goal differential, with the Carolina Flyers also included in the conversation.

Currently, Carolina is 11-1 and plus-60, Colorado is 10-1 and plus-47, and Chicago is 9-1 and plus-42. Obviously, the Flyers are currently positioned to be the two seed at Championship Weekend, but it’s not unrealistic to imagine the Summit, the Union, or both passing them.

Firstly, this all becomes a moot point if Chicago loses at Madison; in that event, Carolina and Colorado, presuming the Summit don’t slip up against Portland, would be certain to avoid New York until the finals if they indeed make it that far.

But let’s imagine the Union prevail by five over the Radicals on Friday; Chicago and Colorado would then both be plus-47 heading into their finales. At this point, it would all come down to who demolishes their Saturday foe by more, and let’s be honest, the Mechanix and Nitro have ignominiously suffered through some of the largest blowouts of the season. Detroit, who carries an astonishing 60-game losing streak into the weekend, has lost three times by double digits this year, including two 14-point thrashings. Portland, meanwhile, is mired in its own seven-game skid, which includes two double-digit defeats, the biggest of which was a 15-goal margin exactly one month ago. 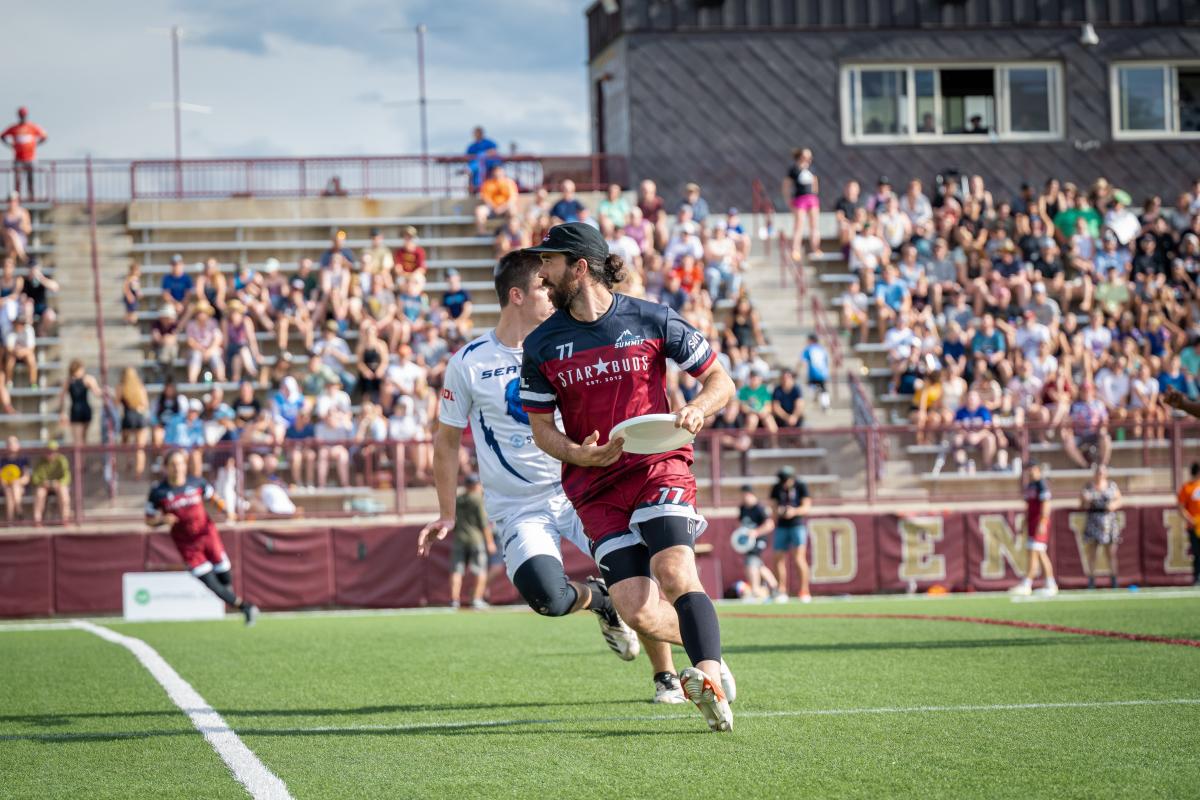 If it’s important to them—and if the Mechanix and Nitro are either uninterested or incapable of stopping them—it’s entirely possible that Week 14 could conclude with Chicago and Colorado both surpassing Carolina’s season-long point-differential, which would then put the reigning champion Flyers into a potential semifinal against New York, creating the possibility where the Flyers knock off the undefeated Empire and give the Union and Summit slightly easier potential paths to their first AUDL titles.

It’s also vital to remember that there’s no guarantee that these theoretical 11-1 division champs are making it to Madison for the league’s biggest weekend. In fact, a road team has defeated a regular season champion in the AUDL playoffs in each of the past five seasons. So New York, Carolina, Colorado, and Chicago, regardless of their final records and point-diffs, all have difficult work to do even before the final seeds are set.

But it’s something to be aware of heading into Week 14, and if Chicago has two wins in the bag by the time Colorado takes the field later that Saturday night, the Summit should know exactly what they need to do against the Nitro to maximize their championships chances. Despite just a few teams playing for their postseason lives, the final weekend of the season still could subtly serve up some very meaningful results.

Why should teams even be thinking so much about that Championship Weekend seeding? Admittedly, it all could be meaningless, but the conversation is seemingly worthwhile because of the New York juggernaut. The Empire are not necessarily unbeatable, but they did just complete one of the most impressive and dominant regular seasons in AUDL history.

The most important tests are still ahead for the Empire, but they are unquestionably the favorite heading into the postseason, with a team of all-stars and excellent role players coalescing into a finely tuned machine.

The Empire are off until August 20, when they will host the survivor of the two/three matchup between DC and Philadelphia.

The Breeze were not at their best on a sweltering Saturday afternoon in Boston, but still managed to escape with a 23-21 overtime win. DC broke the Glory just twice in the first three quarters, but the D-line roared for three clutch breaks in the fourth and one more in OT to sneak away with the road win.

That’s six straight wins for the Breeze, who are 9-2 and ready to host Ottawa in their regular season finale before battling Philadelphia for the right to face New York. A win over the Outlaws would give DC a 10-2 record for the second straight season.

Throughout their franchise’s history, the Indianapolis AlleyCats have rarely made life easy for themselves. But they also have never given up.

That’s the reality again after a disappointing home result on Saturday against Minnesota, where Indy had an opportunity to barge through the front door of the playoff mansion by beating the undermanned Wind Chill. But now the ‘Cats must encounter the reality where they either outplay a talented Atlanta team on the road or at best sneak through the shed and into the slightly ajar backdoor if Chicago helps out by winning in Madison. Or worse, they get excluded from the tournament entirely.

Indy looked sharp early against the Wind Chill on Saturday afternoon, with five consecutive turnover-free holds from the O-line and mid-first quarter break from the D-line giving the AlleyCats a 6-4 edge. But Minnesota rallied right back with an 8-2 rampage en route to a 13-9 halftime lead. The Cats crawled to within one early in the fourth, but never had the disc with the chance to tie, as the Wind Chill prevailed 24-21.

Andrew Roy’s "Honor Roll" performance of 872 total yards anchored the Minnesota offense, while Dylan DeClerck and Brandon Matis each produced multiple blocks for the Wind Chill D. It was also the fourth time in the last five games that Minnesota has kept its turnover total under 15. 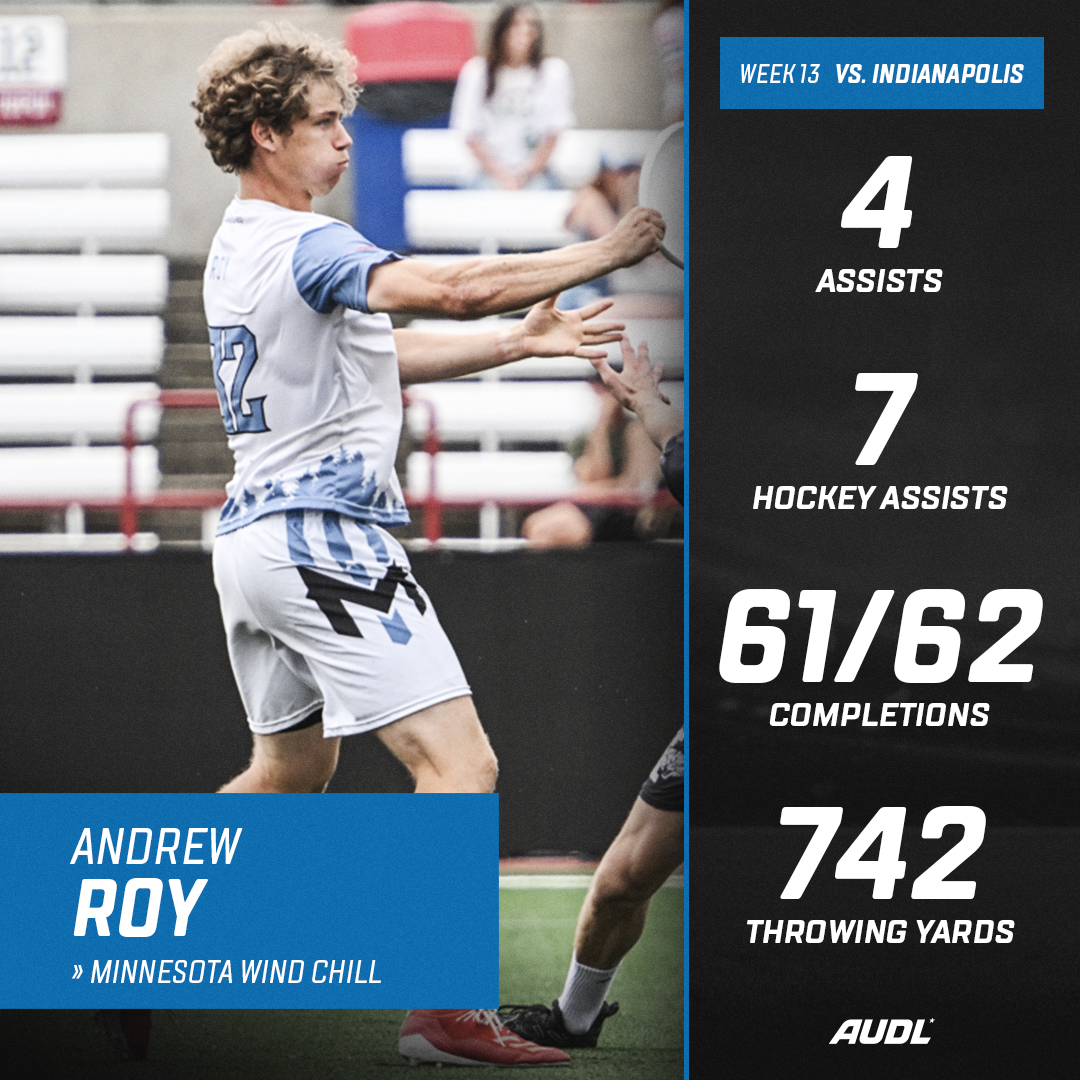 While 8-3 Minnesota will likely face an 0-11 Detroit team this Sunday in the Mechanix’s final chance to break the streak before 2023, the 6-5 AlleyCats are living on the brink. It won’t be easy, but they’re used to that.

As expected, Salt Lake and San Diego officially secured the second and third seeds, respectively, in the West Division with their Week 13 wins. The Shred erased a three-goal second-half deficit against Los Angeles, outscoring the Aviators 9-3 down the stretch to win 19-16 on Friday night. On Saturday, the Growlers never trailed for a single second in Seattle, jumping in front 2-0 in the opening minutes and breaking the Cascades eight times total in a 22-18 win. On Sunday in Portland, the Growlers and Nitro were within one goal of each other for the entire first half, but three straight San Diego breaks to begin the third quarter created the separation responsible for the Growler’s weekend sweep. Paul Lally’s 808 total yards anchored their 23-18 triumph in Portland, improving the Growlers to 8-3 for the season.

Consequently, the Shred and Growlers will square off in Salt Lake on August 13. Winner gets an all-expenses paid trip to Denver and a showdown against the Summit.

Thought you might be interested in seeing it all in one place, so here’s the tentative AUDL playoff schedule. Everything is subject to change, but here’s the rough draft. Looks like a pretty tasty few weeks, if you ask me.

All three Championship Weekend games will be held at Breese Stevens Field in Madison, WI. The two semifinal games will be available to watch live on watch.AUDL.tv, while the 2022 AUDL Championship Game will be broadcast live on FOXSports FS2.

Another sneaky storyline heading into the final weekend of the regular season: Is it possible that road teams could finish above .500 this year? Astoundingly, it is within reach, though I’ll add that it’s wildly unlikely, considering the Week 14 slate.

Powerhouse programs like DC, Austin, Salt Lake, Philadelphia, Chicago, San Diego, Colorado, and Minnesota are all home this weekend. Those eight teams are all playoff bound—presuming the Sol don’t stumble—and their eight opponents enter the weekend with a combined record of 13-67. Yikes.

Even if Chicago wins in Madison, Indy wins in Atlanta, and Oakland wins in LA—none of which are sure things, obviously—It’s almost unfathomable to imagine the road teams having another winning weekend, collectively.

Still, there’s a bunch of quirky, meaningful, and secretive subplots as we near the regular season finish line. And Championship Weekend is exactly one month away.