For many reasons beyond ultimate, New York Empire Co-Head Coach Charlie Hoppes is giddy about the opportunity to bring his team to Colombia.

“My mom is from Peru, and I have not been to South America before,” said Hoppes. “I know Colombia’s not Peru, but it’s still cool to head in that direction. My mom is incredibly jealous. For me personally, heading there is really special.”

Of course, this international preseason trip has plenty of ultimate perks too, particularly as the Empire look to hone their chemistry toward a run at another AUDL championship.

“It has the capacity to be a really special tone-setting weekend for us culturally,” said Hoppes.

As the AUDL announced on Monday, delegations from the Empire, DC Breeze, and Los Angeles Aviators will all travel to Medellin, Colombia next week to compete in the legendary ultimate tournament known locally as “TEP”, which stands for Torneo Eterna Primavera. The three franchises will both compete in the tournament, which will include players from all over the world, and they’ll take part in a pair of Saturday evening showcase games that will be broadcast live on AUDL.tv. 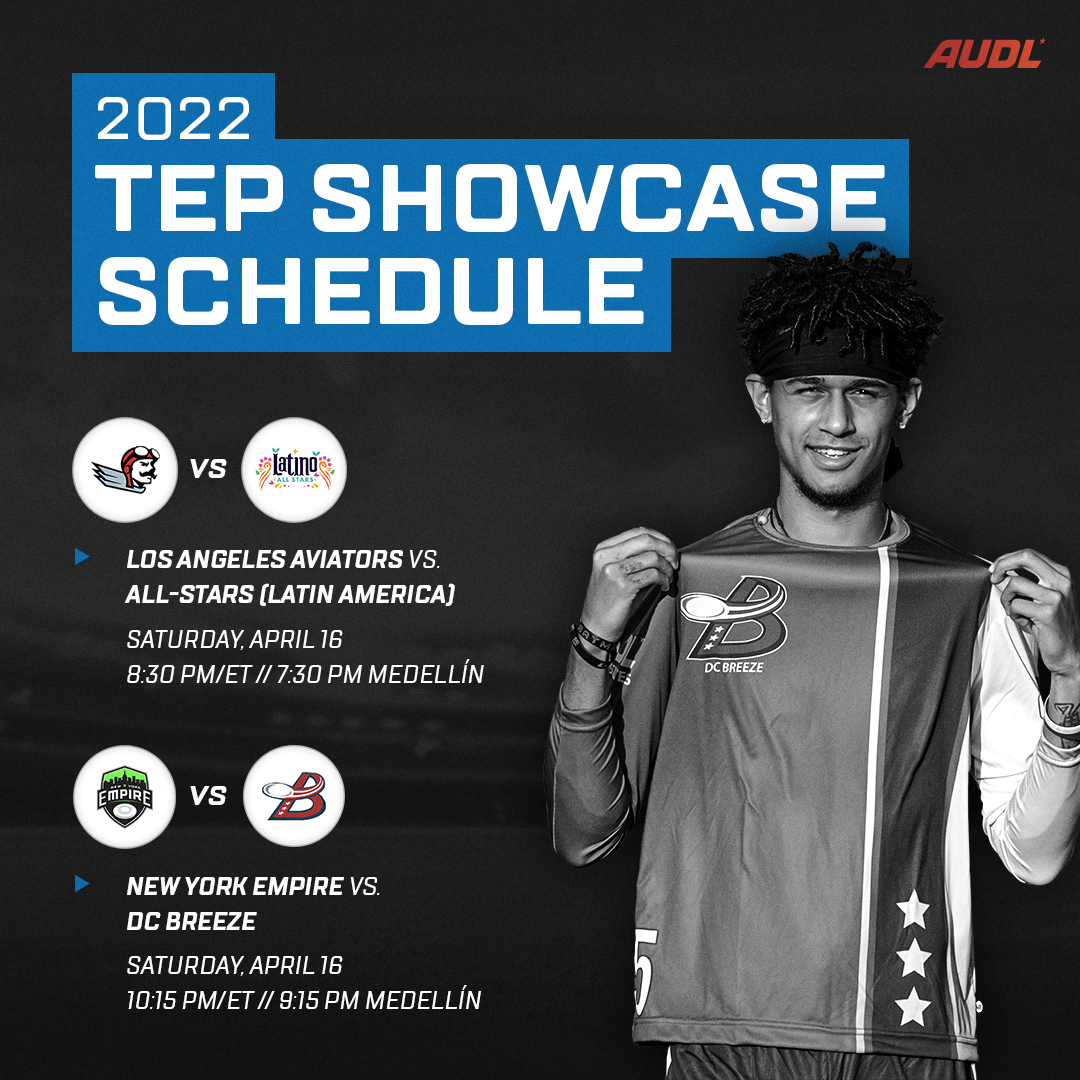 At 8:30 PM/ET on April 16, the Aviators will take on a team of Latin American All-Stars, consisting of top players from Argentina, Chile, Colombia, the Dominican Republic, Mexico, Panama, and Venezuela. One of the leaders of the Latin Am All-Stars will be a familiar face for Los Angeles, as former Aviator Joc Jiménez, who caught 42 goals for LA in 2019, will face off against his old team for the first time.

“It’s an honor to have the opportunity to play the sport I love with my team in front of my home country,” said Jimenez in yesterday’s AUDL press release. 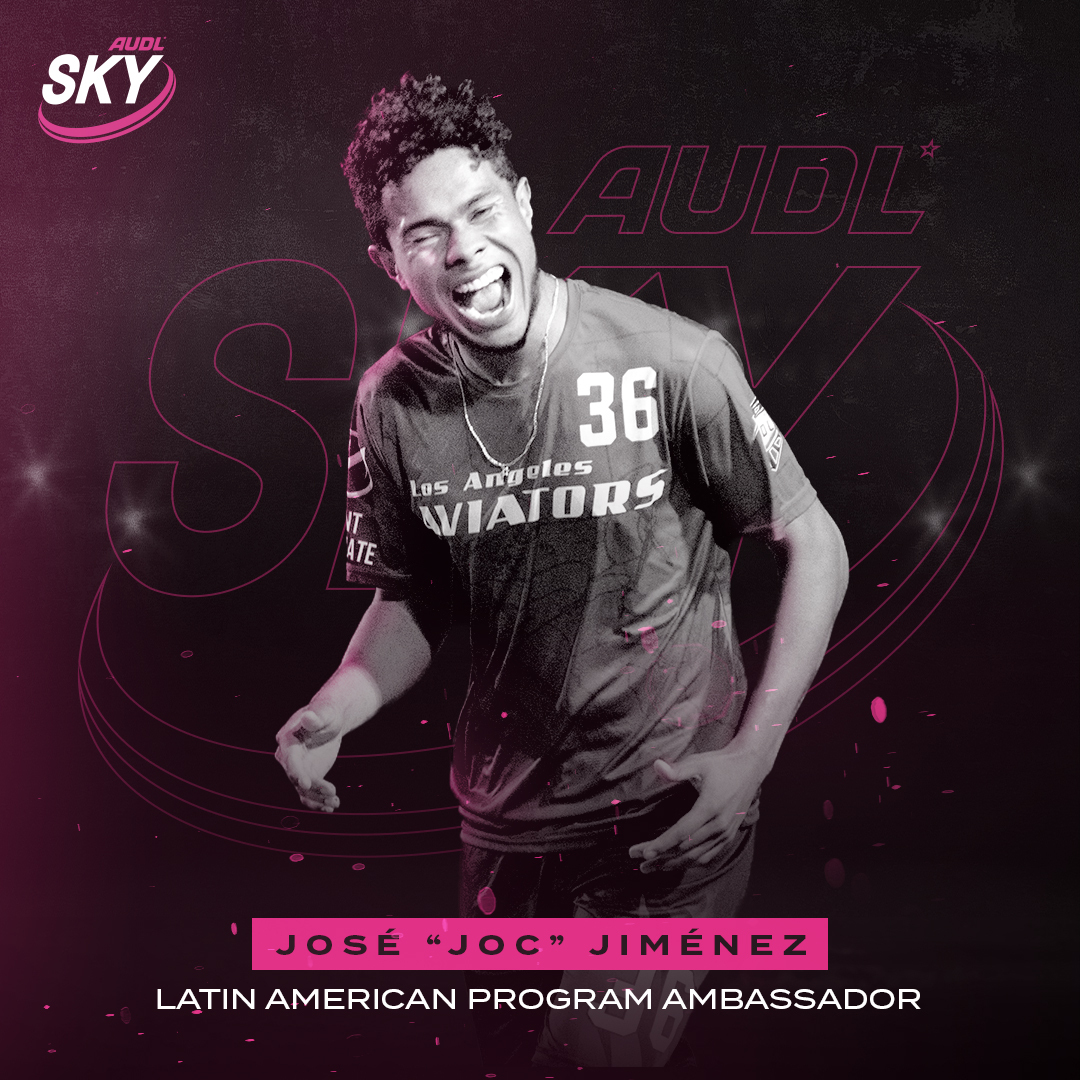 The nightcap of the AUDL.tv doubleheader showcase, scheduled for 10:15 PM/ET on April 16, delivers one of the league’s fiercest rivalries, as the Empire and Breeze will square off in an exhibition exactly two weeks prior to meeting in Week 1 of the regular season. Even if the two teams won’t unveil all of their new strategies in this preseason matchup, it will still be marvelous to watch, especially considering the caliber of players who’ll be making the trip.

“We’re gonna have all the stars,” confirmed Hoppes.

While individual schedules and travel plans can certainly change, as of this writing, the Empire expect to have the vast majority of their opening day lineup heading to South America next week.

That includes two-time defending AUDL MVP Ben Jagt, along with fellow 2021 First-Team All-AUDL honorees Ryan Osgar and Jack Williams. Jeff Babbitt, who earned Second-Team All-League along with All-Defensive Team honors last year, will be there too, as will the Empire’s marquee free agent signee Antoine Davis.

The Breeze may not have quite the same depth in Medellin, but DC will have its fair share of marquee talent, including 2018 AUDL MVP Rowan McDonnell, 2021 Defensive Player of the Year AJ Merriman, and nifty 23-year-old handler Jonny Malks, who earned Second Team All-AUDL honors a season ago. The Breeze are also bringing key contributors like Zach Norrbom, Jasper Tom, and Jeff Wodatch, along with dynamic downfield cutter Tyler Monroe, who rejoins DC in 2022 for the first time since he recorded 76 scores across 11 games in 2017. 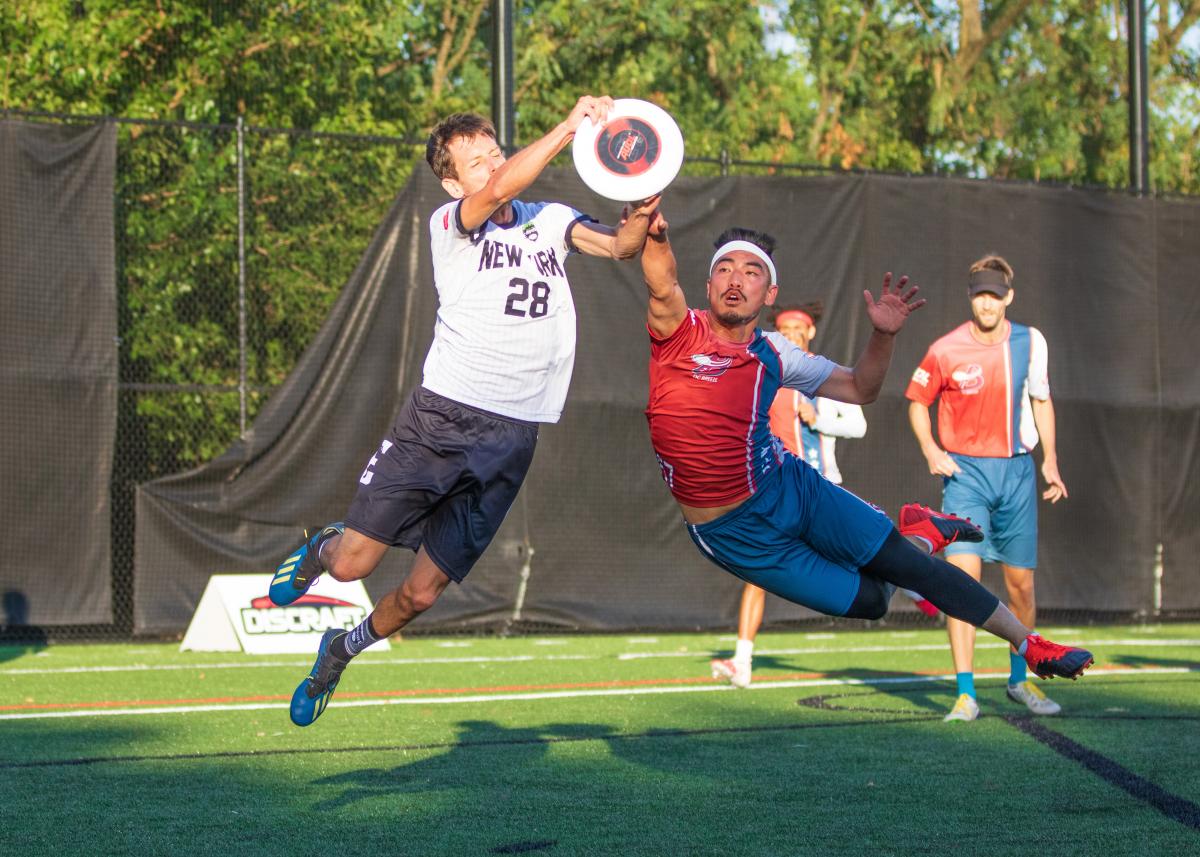 The New York-DC rivalry has been riveting for much of the past decade. Exactly half of their past 22 meetings have been decided by just one goal, dating back to mid-July 2014, with a half dozen other games in this stretch settled by margins of four or fewer. They both went 10-2 a season ago, tying for first place in the eight-team Atlantic Division, with the Breeze earning the regular season title thanks to their head-to-head point differential. But New York advanced further in the postseason, as the Empire fought their way back into the finals before ultimately falling to Raleigh in a thrilling title game.

Entering 2022, the Empire are the AUDL’s only team that’s made each of the past three Championship Weekends, while the Breeze are still searching for that elusive trip to the semifinals.

Stanley believes his team has the pieces to compete for a title, but building that team fabric has felt a bit different heading into this campaign compared to coming out of the pandemic.

“It’s harder this year because last year I looked at what made us very successful, it was continuity, it was practice, it was we were the only game in town for a good three, four months, and that let us build a lot of chemistry and continuity,” Stanley explained. “Things are a little busier now.”

Come the regular season, the Breeze will still very much rely on their depth, even though they have lost key 20201 contributors like Quinn Bergeron, Ben Green, and Joe Merrill. Stanley quickly pointed out how that trio could be replaced by players like David Cranston, Delrico Johnson, and Monroe, all of whom are more experienced and returning to the Breeze after a multi-year hiatus.

Depth might also be the buzzword for New York, as Hoppes feels the team has elevated its ceiling by bolstering the middle portions of the roster during the offseason. 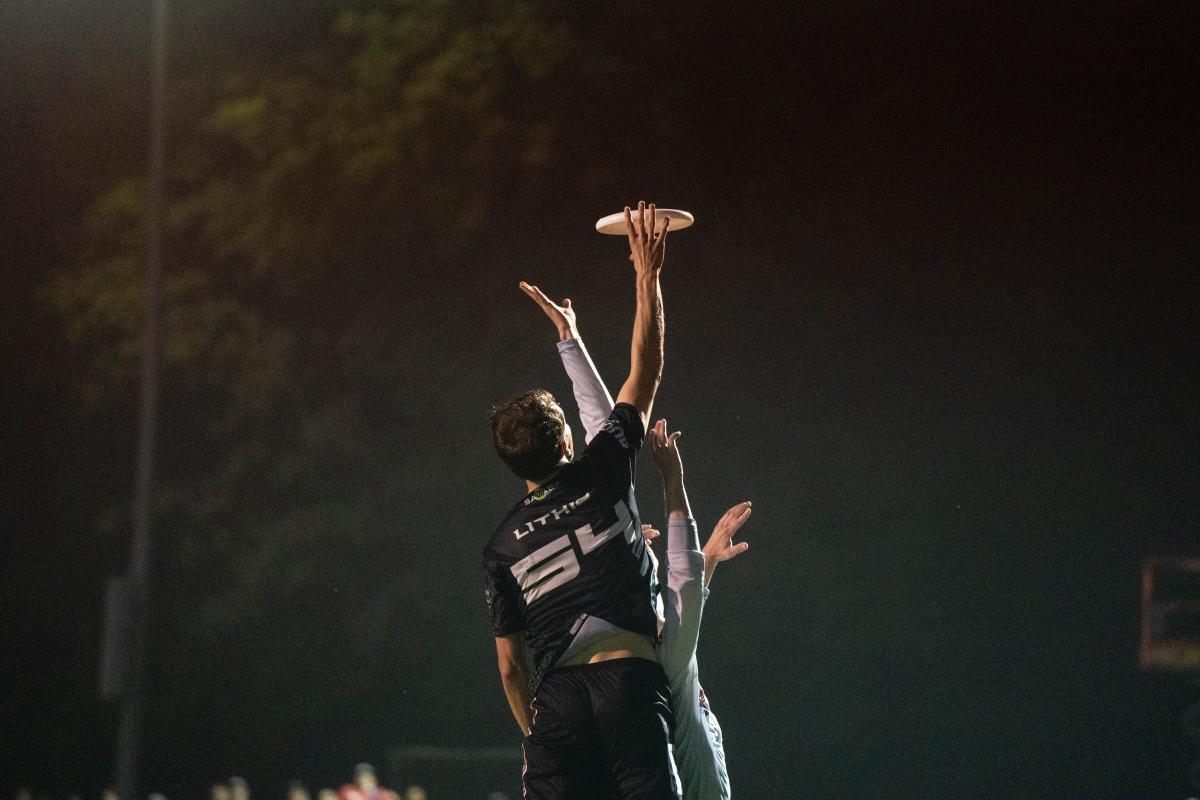 “Our depth was an issue last year,” Hoppes admitted. “And we feel it has a very strong capacity to be a strength for us this year.”

Aside from adding Davis, who the Empire expect to slot alongside Babbitt on the team’s top D-line, New York feels that signees like Charles Weinberg, Mark Lin, and Scott Xu can fill critical roles throughout the season. All arrive with substantial AUDL experience, particularly Weinberg, who registered 107 scores in his two seasons with Minnesota. The Empire envision Weinberg cutting on the O-line alongside the returning core of Jagt, Osgar, Williams, and John Lithio, which adds even more flexibility to New York’s attack.

New York will likely begin the season with Elliott Chartock or Solomon Rueschemeyer-Bailey in the starting handling roles, but they know they have plenty of options to tweak or even turbo-charge the game plan, viewing Weinberg’s addition as a critical factor in utilizing Williams’ trademark versatility.

“Jack Williams is probably the best handler on our roster,” said Hoppes. “Last year, it hurt to bring him from downfield [into the backfield handler set], but this year we have [Weinberg]. So there’s a running mate for Osgar even if we have to move [Williams]…I think Charles would be the 1A initiating cutter on most of the other teams in our division.”

The Empire’s roster smorgasbord also includes Ethan Fortin, Matt Ellis, and Mike Kobyra, who each have played for two other AUDL franchises prior to joining New York. Last year, Fortin was with Boston, Ellis with Philly, and Kobyra with Madison. 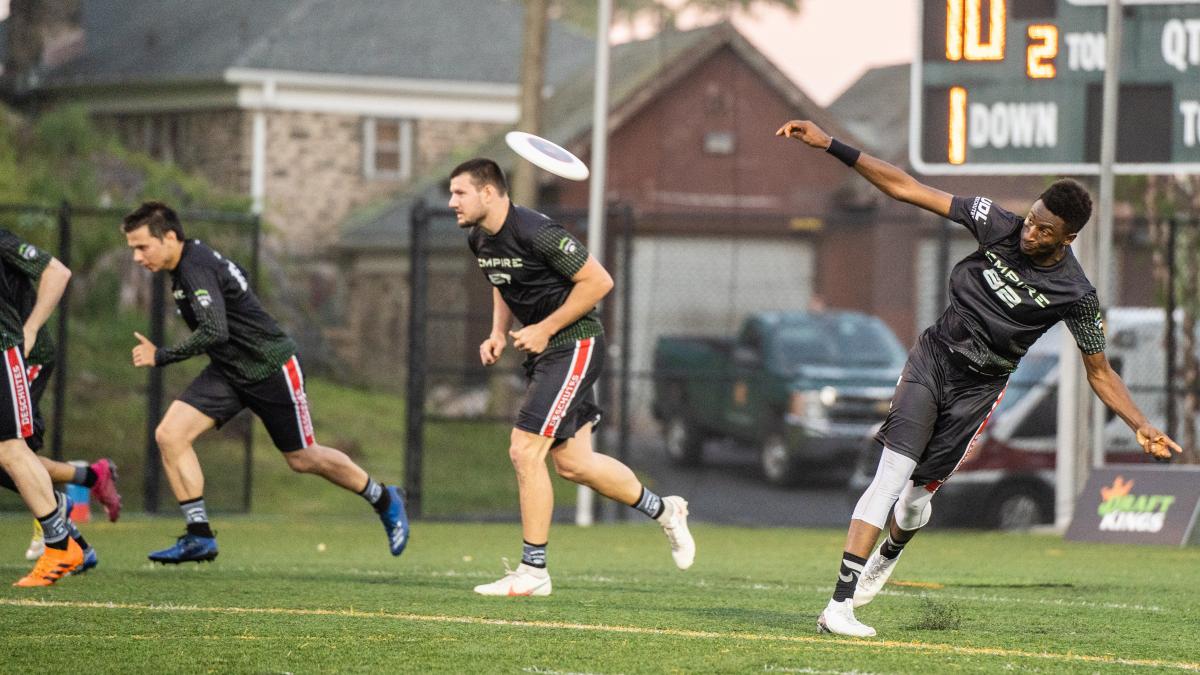 Both the Empire and the Breeze fully expect to be back in the postseason in 2022, and it’s hard to fathom any AUDL prognosticator selecting one of them to finish fourth or lower in the seven-team East Division. The Aviators, meanwhile, will probably not receive quite the same preseason optimism from the oddsmakers, but Los Angeles still believes that they can compete with anyone out West.

With all that said, Landesman also understands why Adam Ruffner’s preseason rankings had them 19th out of 25 and sixth out of seven in the West Division.

“If I was doing the power rankings, and I saw a team that lost Calvin Brown, Sean McDougall, and Danny Landesman, I can’t say I’d rank us any higher than we’re ranked. But it’s also pretty great. It’s great fodder for us to be the guys that no one believes in." 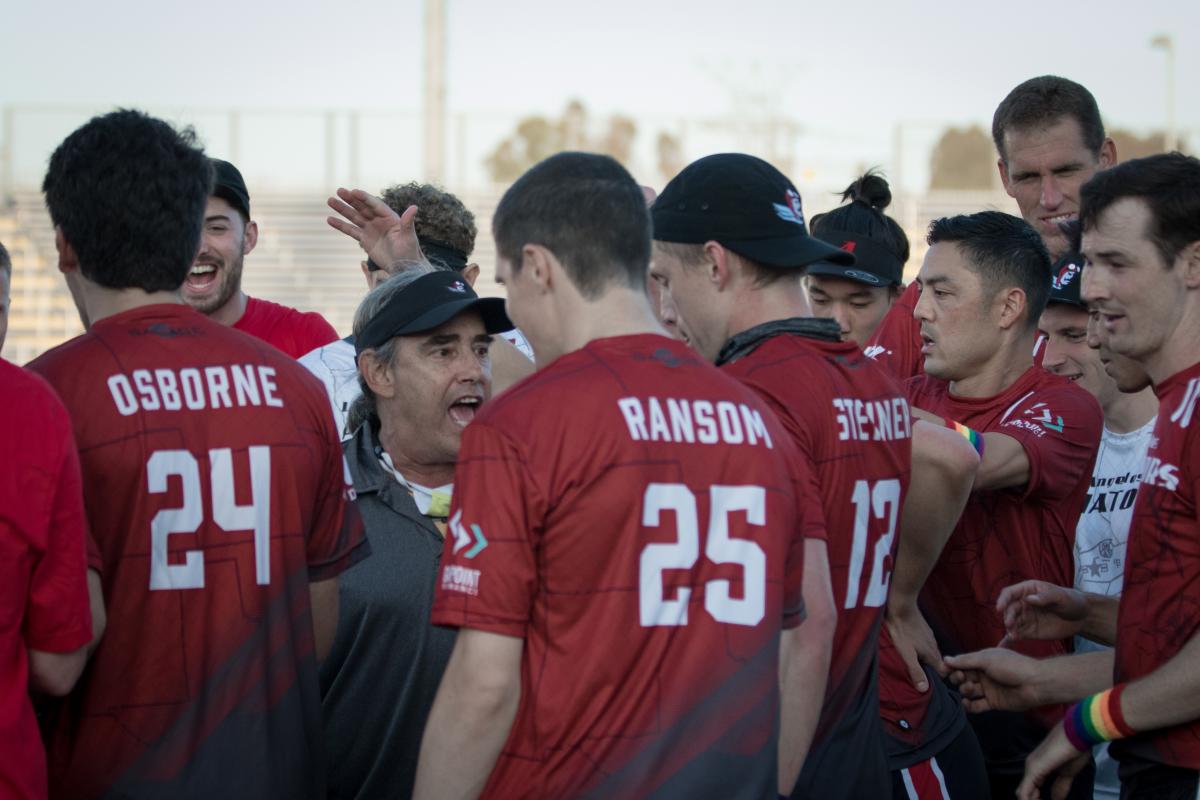 “I like being in that position. I think we can surprise some people.”

The Aviators will have 19 players traveling to Medellin next week, including former AUDL champion Michael Kiyoi, 2019 AUDL All-Star Aaron Weaver, and budding star Sam Cook. KJ Koo, named a First-Team All-American by Ultiworld after his standout performance at 2021 College Nationals, will make the trek to Colombia too, along with his current Cal Poly SLO and Los Angeles teammates, Seamus Robinson and Matt Miller.

The Aviators are also excited about signing Everest Shapiro, Tulane University’s 2021 Callahan nominee, and Rhys Gretsch, who’s a product of the North Carolina youth ultimate scene, played at NC State, and previously had a cup of coffee in the AUDL with the Flyers.

Looking ahead to the regular season, it will definitely be different for Jeff Landesman to no longer have his son, Danny, on the Aviators roster, but he also was fully on board with Danny spending a summer in Colorado. This does create the juicy subplot of Danny signing with the expansion Colorado Summit, which means the two Landesmans will go head-to-head in the AUDL for the first time.

“It’s definitely the right thing for him to do,” said Jeff, “as hard as it is for me to imagine playing against him. When we play them, I want him to have a great game, but I want us to win. I don’t feel like I have any tricks up my sleeve to stop him, cause it’s just hard to stop him. Some of the guys on our team will be psyched to stop him though.” 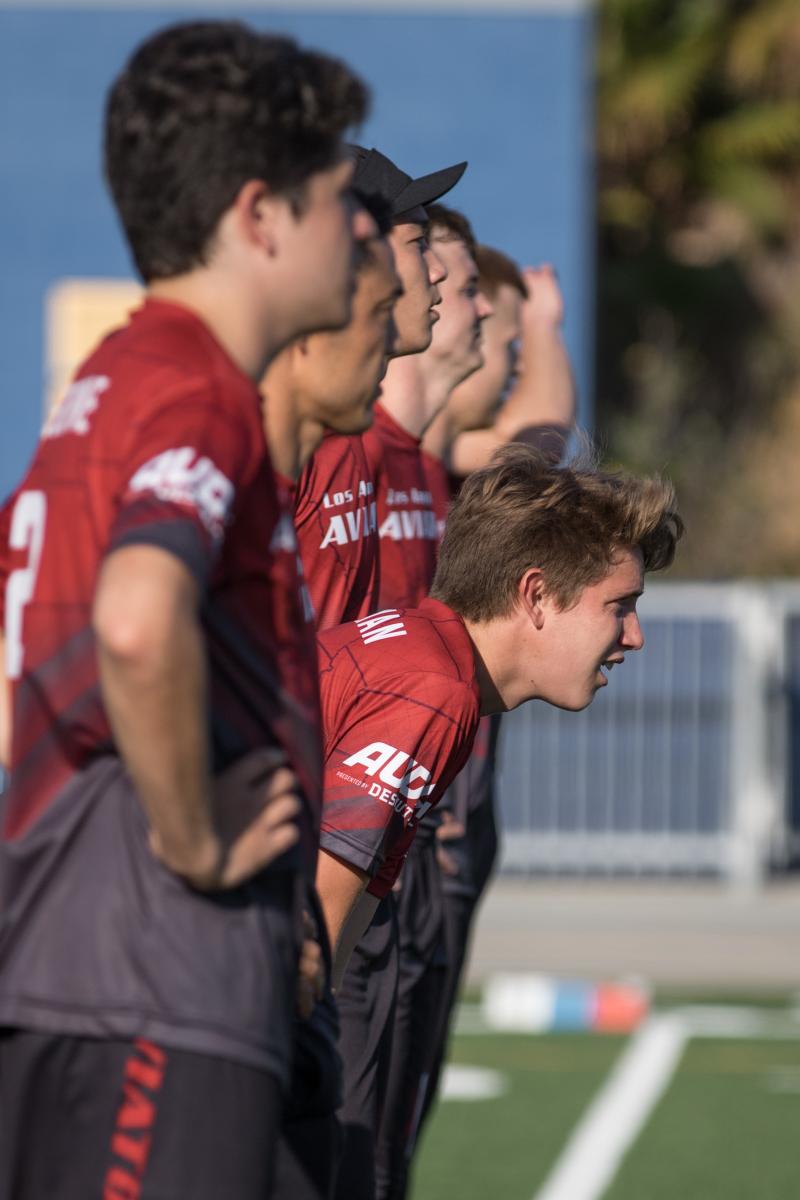 We’ve previously seen brother vs. brother in the AUDL, but this will be the first time, to the best of my knowledge, that we witness a father vs. son matchup, with Jeff coaching and Danny playing. The Summit and Aviators are scheduled to meet on July 2 in Colorado, with the rematch in Los Angles two weeks later.

But first things first, with the trip to Colombia beckoning.

“The team is really psyched,” said Jeff. “It’s gonna be really fun for them to play together and play a bunch of other teams.”

Presently, the Aviators, Empire, and Breeze are exactly 25 days away from their 2022 regular season openers. But the trek to TEP is on tap first.

I’ll be boarding my first ever flight to Medellin a week from Thursday, and I personally could not be more excited.