The Tuesday Toss: The Reign Of Beau | AUDL
Skip to main content

Six weeks ago, the New York Empire were 4-5, mired in a three-game losing streak, and scheduled to play four of their final five games on the road. Understandably, everyone was frustrated, as the Empire threatened to miss the playoffs completely for the second straight season.

Six weeks later, on the verge of Championship Weekend, the Empire are preparing to compete against the Dallas Roughnecks in the AUDL semifinals after an astonishing string of late-season victories, where the team came together, overcame adversity, and finally transformed their significant individual potential into a cohesive, productive unit that suddenly appears capable of winning it all. 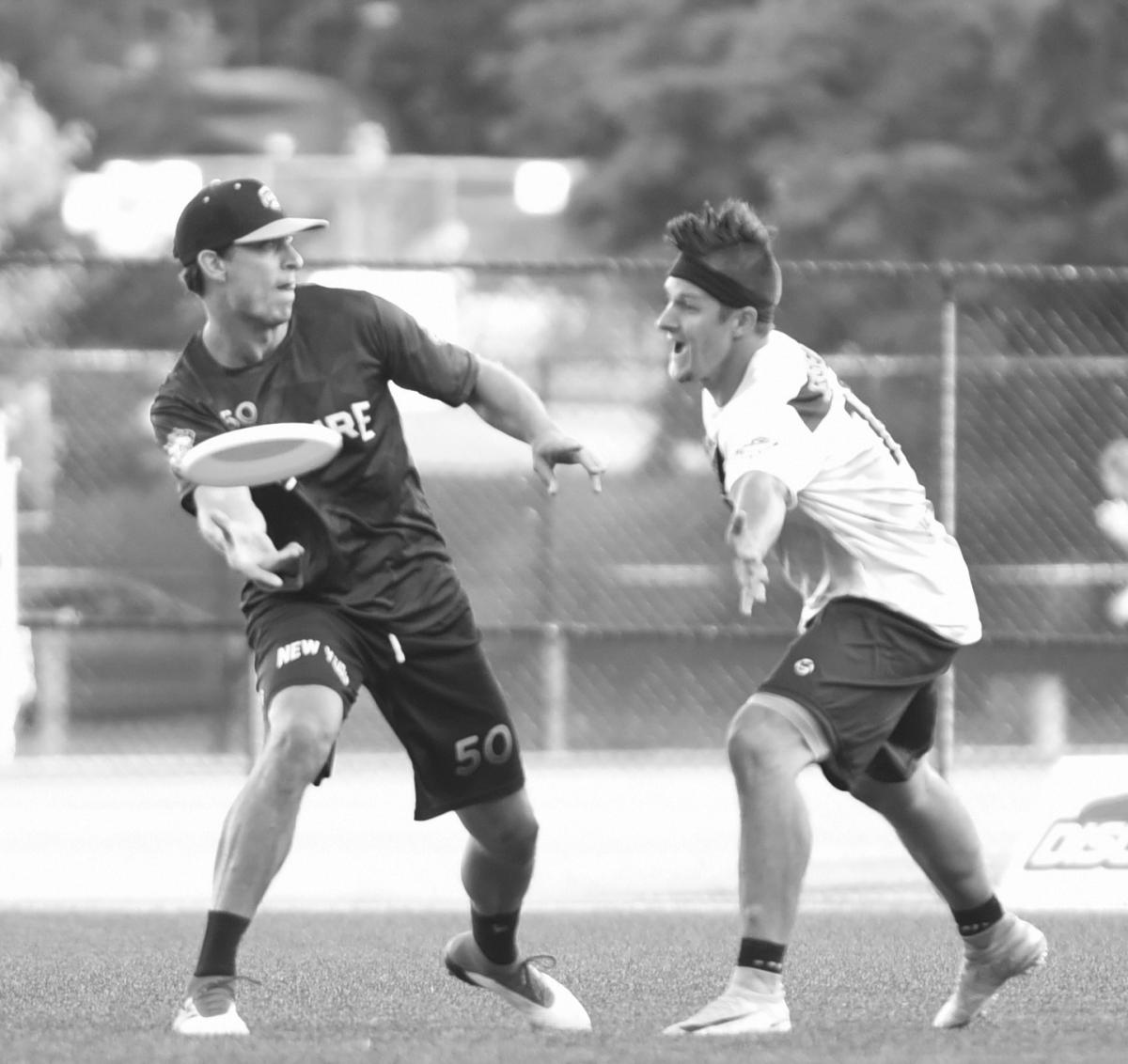 “After we lost the two games [on the road in Canada in mid-June], I basically went to the coaching staff and the owners and was like, ‘Look, we can fix this; here’s how we can fix it; let me fix it and get everyone on the same page; if you let me do that, we’ll have a chance,’” said Beau Kittredge. “Thankfully, it took a few days, but everyone agreed and we were able to come together and bring all those pieces that everyone thought might be right together, and here we are.”

Here they are, indeed, an unlikely but tantalizing team led by a first-year coach, a couple of uber-athletic young superstars, a pair of crafty and complementary handlers, a set of veteran twin defenders, and a 36-year-old ultimate nomad who is looking to win his fifth consecutive AUDL championship with four different teams, a feat that seems as absurd as it is improbable.

In the four major American professional sports, in fact, it’s completely unprecedented. As far as I can tell, no athlete has ever won championships with four different teams. Across the history of the NFL, NBA, NHL, and MLB, there are only 26 players who have won titles with three different franchises. It’s never been done in football and has happened only twice in basketball (Robert Horry and John Salley). Ten have hoisted the Stanley Cup with three different teams, while 14 have won the World Series in three unique uniforms.

Beau may no longer have the same nuclear speed that helped propel the San Jose Spiders in 2014 and 2015, the Dallas Roughnecks in 2016, or even the San Francisco FlameThrowers in 2017, but his mid-30s athleticism remains worthy of his opponent’s respect. More importantly, his veteran savvy, work ethic, and pattern of succeeding under pressure have given him license to assume more leadership responsibilities for this Empire team that was struggling to get everyone in sync and steering in the same direction.

“It’s amazing what Beau has done [throughout his career], and he has certainly helped with bringing a winning mentality to this year’s team,” said Matt LeMar, who’s played in every game in Empire history.

“And having him on big points,” added New York’s Head Coach Eileen Murray. “There are some players on our team that haven’t played on a big stage. But you have this other person that you can put out there on offense or defense at any point in the game who isn’t gonna be shaken at all. He’s gonna go on and continue to do the job. And that calmness definitely helps everyone else on the line.” 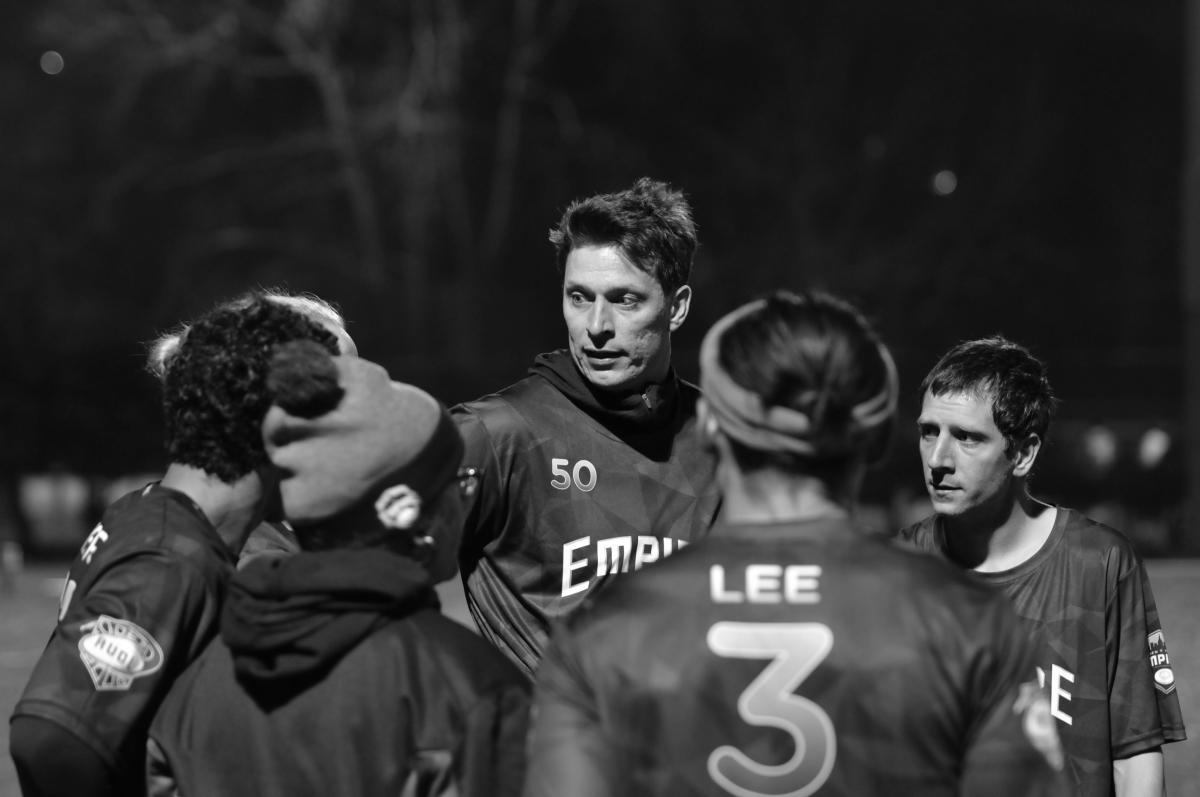 It has not been the easiest of years for Murray, who took over coaching responsibilities for the New York franchise after leading the Philadelphia Phoenix in 2017. In early May, while vacationing with her family in Georgia, a random gunman shot the back windshield of her car while it was moving on the highway. While all passengers were relatively unharmed physically, the emotional toll was severe. For a long time, she struggled to feel like herself. Kittredge, among others, took notice.

“When I was struggling after the incident and still trying to find my way, Beau reached out and was like, ‘you don’t have to do this alone; ‘let’s work together,’” said Murray. “Part of it was him having the maturity just to reach out to me. And he was able to get the communication started again.”

With tremendous self-confidence, Kittredge aggressively sought to help his new coach and influence his new teammates when times were tough.

“I think having nobody who’s been successful in elite men’s ultimate anywhere in the organization—and I’m talking like winning a club championship or winning an AUDL championship—has resulted in a lot of people being given voices,” said Kittredge. “It’s kind of a problem in ultimate in general, everyone thinks they know what’s best. And there are a lot of strong personalities on this team all the way from the top players to the coaching staff to the bottom of the roster to the people that don’t even play a lot. Maybe it’s a New York thing, but everyone has a strong personality and you have to contend with the fact that everyone wants to feel important and everyone wants to feel like they’re the reason why we win. And when things go bad, no one really wants to step up and take responsibility. It’s been more about managing people, like how to keep people engaged and how to keep everyone on the same page. Having 20 voices and trying to sort through all of those voices and let the ideas that are good percolate to the top has been 90 percent of my work.” 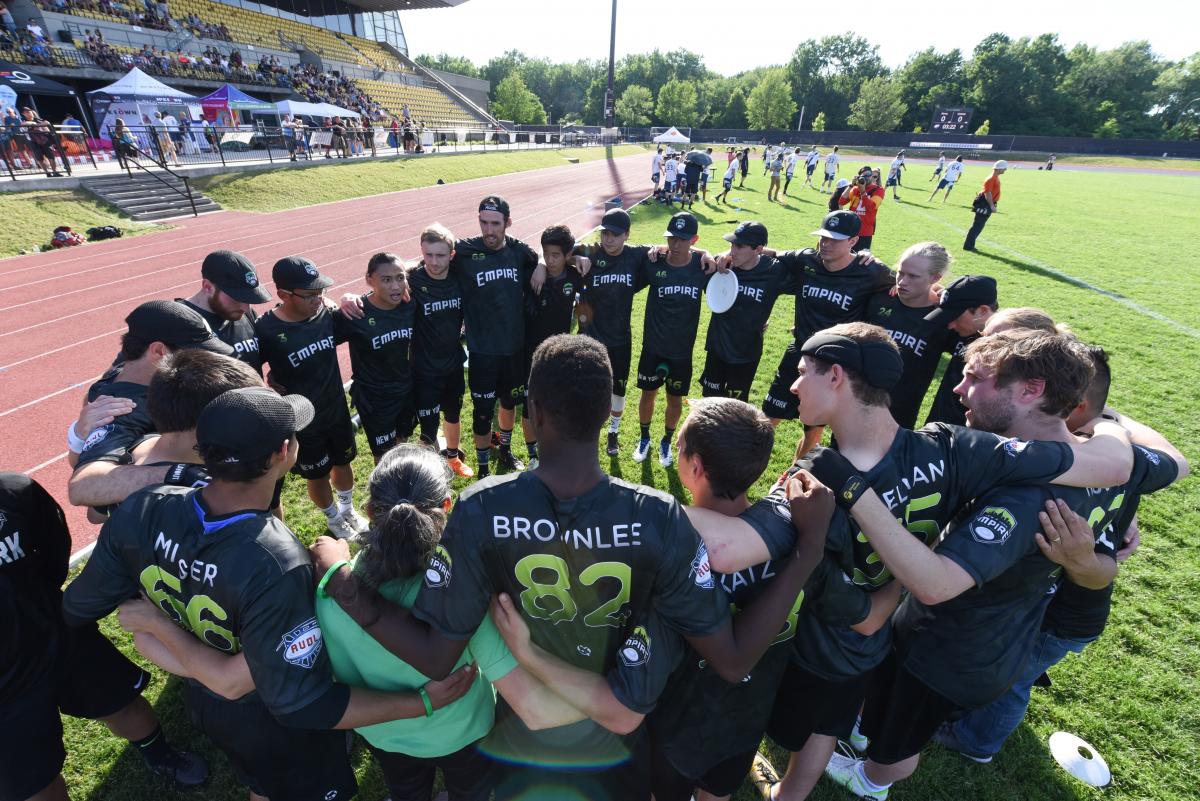 It’s not like Kittredge has completely and unilaterally taken over the strategic planning for the team throughout its 6-1 run to the final four, but his voice has gotten louder in these conversations compared to the volume or assertiveness he displayed in April or May. As he got to know his new teammates and vice versa, it’s been a lot of trial and error to figure out what type of on-field roles and organization would be the right fit.

“It’s not about being right,” explained Kittredge, when asked how he determined what kind of systems the Empire should run. “It’s about getting everyone to agree on something that’s as close to right as possible. And what’s close to right might be different from one team to the next. Figuring out what to do for our offense or for our defense is not necessarily what would work for Revolver. It has to be based around the skillsets we have and the people we have. I don’t have to be right; I just need everyone to agree that we’re doing what we think is the right thing.”

In tweaking a bunch of little things on the field, the Empire began to click, finding a rhythm to their resets and a more consistent conversation rate overall. Some personnel have moved into new roles, with Jeff Babbitt and Marques Brownlee playing more offense and Ben Katz becoming more of a disc-dominant center handler. Emotionally, the Empire have repeatedly stressed the importance of positive sideline energy, something that stood out late in the DC monsoon on July 21 and carried over to the epic East Division championship game upset of the Toronto Rush on July 28. After an extended time where the Empire looked like a collection of individuals, they have truly coalesced to become a team during this postseason run.

Prior to the Empire this year, no team in AUDL history had ever finished third in its division and proceeded to win back-to-back road playoff games to advance to the final four. Speaking of history, there’s also Kittredge’s quest to be a part of another title team, something that felt impossible back in June.

“It wouldn’t be much of a secret if I told you,” he responded.

Wisely, Kittredge does not want to point to a single reason as the secret to his success. At the same time, his answers to other questions, like why he’s chosen to switch teams as frequently as he’s done, offer some valuable perspective on his overall mindset. While many factors related to life and ultimate have gone into his decisions, Kittredge says that only a small part of his motivation is showing that he can experience success with different groups of people.

“I think proving myself to other people is a small percentage [of what motivates me], maybe 20 percent,” Kittredge said. “I think it’s more, the rest of it’s proving and learning; it doesn’t really have to do with ultimate; just getting people together to do something amazing and do something unique and cool is basically what ultimate is. Just being part of all of these organizations is about just learning how to be successful given a bunch of variables. 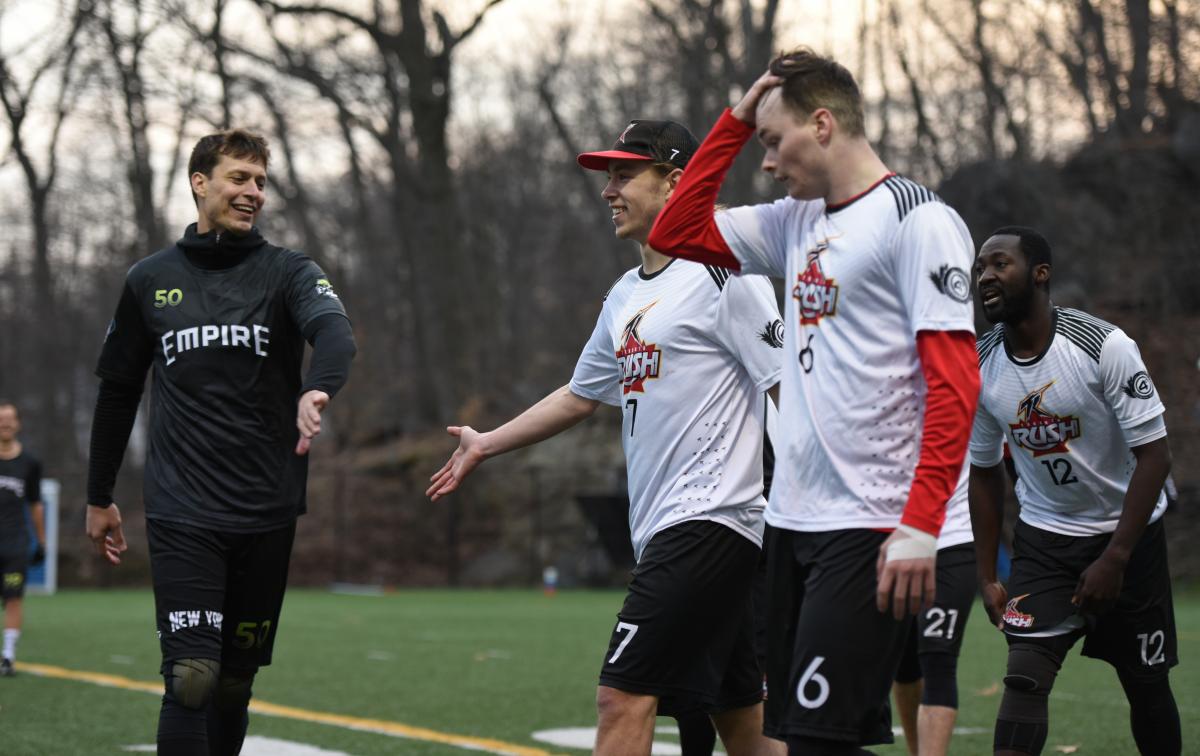 “Every time I come to a new place, there’s a different set of problems and a different set of issues. This year’s had more problems and issues than I could have imagined, and it’s been a fight and a struggle to overcome them, but it’s also made me a way better person, a way better leader, way better at being successful because of all the issues. If I want to be successful the rest of my life running a video-game company or doing anything like that, learning these lessons and learning how to get the most out of the things that you’re a part of are very important.”

It has also helped, of course, that Kittredge has picked spots where he’s been been accompanied by some of the country’s top talent. In the Bay Area, he suited up alongside Ashlin Joye and Cassidy Rasmussen, even recruiting Kurt Gibson to join him for a season in San Jose. In Dallas, Dylan Freechild and Jimmy Mickle, a pair of Callahan Award winners in their primes, helped carry the weight. And with New York, Kittredge entered a situation where Babbitt and Ben Jagt, both monster athletes in their early/mid-20s, were already All-AUDL standouts who were looking to bring their individual games to a championship level.

“It’s nice,” Kittredge said, when asked what it was like playing with the Empire’s two dynamic big men. “As Jagt and Babbitt come into their own and realize—they both have not only phenomenal builds for ultimate, but also have the skillsets to be offensive weapons from the throwing position as well as from the receiving position. As they become more and more confident on offense, as I think they will start to do, it’s gonna be real nice. When they start going both ways, going deep, going in, turning and hucking, it’s gonna be something to behold because they both have really good throws.”

Even with stars like Jagt and Babbitt and a solid core of role players, it was unclear whether the Empire would have the depth to really do some damage in the postseason. In the last two games, though, several individuals have stepped up—Matt Auletta, Jibran Meiser, and Josh Alorro come to mind—and the Empire have also leaned on many of their established veterans to play a ton of points.

So here they are, ready to face off with Dallas, one of Beau’s old beaus, on Saturday at 5:00 PM/ET, for the right to play in Sunday’s title game. With a bunch of playmakers still remaining from their perfect 2016 season and a solid core of young additions that helped carry them past Raleigh, the Roughnecks enter Championship Weekend with a 14-1 record and an 11-game winning streak.

Kittredge, who carries his own personal 14-0 AUDL playoff record into the weekend, is eagerly awaiting the challenge. 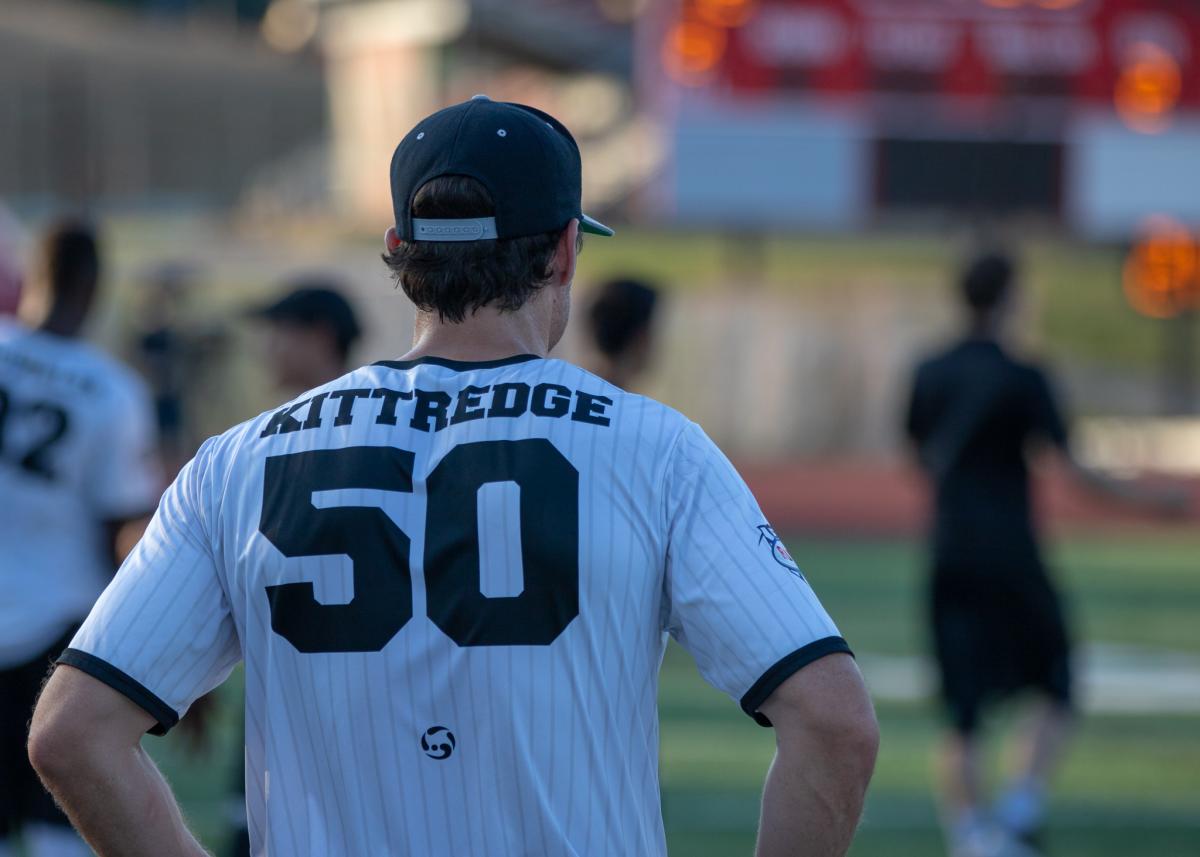 “I actually think it’s gonna be a really good game,” Kittredge said. “They’re actually similar to us, they’re pretty athletic, they’re pretty young, they like to go hard, they never give up, and they’ve done big things in their career. They want to go out there and prove that they don’t need a big, huge superstar on their team. They’re playing with a chip on their shoulder, and I think that’s great. I think it’s gonna be a really fun game. Both teams are gonna be going pretty hard at each other, and it’s gonna be a lot of athleticism, that’s for sure.”