The Tuesday Toss: Contenders And Others | AUDL
Skip to main content

Deceptively, the final score was 24-16. It wasn’t that close.

On Saturday night at Breese Stevens Field, 1,200 of the best fans in ultimate were dealt a powerful punch in the gut, and the hometown team they cheered for was left looking for answers, humbled by the speed, precision, and overall brilliance of a dynamic opponent finally hitting its stride.

The Raleigh Flyers’ rollicking rout over the Madison Radicals was the rare concurrence of surprising and inevitable. The visiting Flyers had been hyped as a SuperTeam throughout the season, but had struggled to fulfill the lofty expectations. The Radicals entered the evening undefeated but relatively untested, leaving them vulnerable and unprepared for their biggest game of the year.

Even if Raleigh possessed more talent, the thinking went, the combination of Flyer inconsistency and Radical home-field prowess would lead to a competitive interdivisional showdown. Instead, the Flyers overwhelmed the Radicals immediately, dealing them their largest deficit and worst loss in franchise history. Raleigh scored 12 of the game’s first 15 goals, at times toying with a Radicals’ roster that could not match up.

From Raleigh’s perspective, it was refreshing. It was a glimpse at what the Flyers thought they could be. Even without Jonathan Helton, the offense was dominant. Jonathan Nethercutt and Jack Williams dazzled with their versatile, unstoppable two-man game, combining for six goals and 12 assists. Mischa Freystaetter and Jacob Fairfax commanded respect as towering downfield targets, totaling seven goals between them. Bob Liu and Brett Matzuka were crafty, squirrelly, and patient, calmly and relentlessly connecting with the open guy. Together, Liu and Matzuka completed 103 passes with zero throwaways. Kiron Allen, Terrance Mitchell, and Jacob Mouw continued to excel as solid and reliable role players, capable of moving the disc and feeding the stars.

By the end of the night, Raleigh had reaffirmed why it had been so highly regarded, and that despite losses to the Dallas Roughnecks (by three), Austin Sol (by two), and DC Breeze (by one), the Flyers remain a daunting championship contender. At 6-3, with four of their final five games at home, the Flyers are almost certainly assured of a playoff berth. While they trail first-place Dallas by a game and a half, they have already proven they can win on the Roughnecks’ home field.

Game Of The Week Archive

The sample size and eye test have reached a breaking point where ignoring the evidence is irresponsible; the Midwest Division needs to step up. Obviously, this starts with the Radicals, who, despite Saturday’s shellacking, remain the heavy favorite to emerge from this region. They have 10 weeks to build, tweak, and improves themselves in anticipation of a return trip to Championship Weekend, which they will once again be hosting.

Perhaps Madison’s worst loss ever will be looked at as a blessing in disguise. Maybe this is exactly the humbling experience that the Radicals need to take a hard, honest look at everything they are doing. And while upcoming games against the Indianapolis AlleyCats, Minnesota Wind Chill, and Chicago Wildfire are not guaranteed victories by any means, the Radicals’ should have the flexibility to tinker and experiment throughout the next couple months. Their goal, which has been articulated here in the past, has to be bigger than simply winning Midwest games. They need to foster a new explosiveness that will allow them to handle the speed and talent from elsewhere around the league. Otherwise, the Final Four struggles will emerge again, spoiling another promising opportunity.

The Radicals were missing a few key O-line cogs on Saturday, as Kevin Brown, Avery Johnson, and Thomas Coolidge were absent due to injury or illness. With the college season now concluded, Madison expects to welcome former Radicals’ Chris Wilen and Jeff Maskalunas back from the University of Wisconsin roster in the coming weeks. This quintet could certainly increase the team’s collective quickness and straight-line speed.

But will it be enough? And if not, what else can the Radicals do? 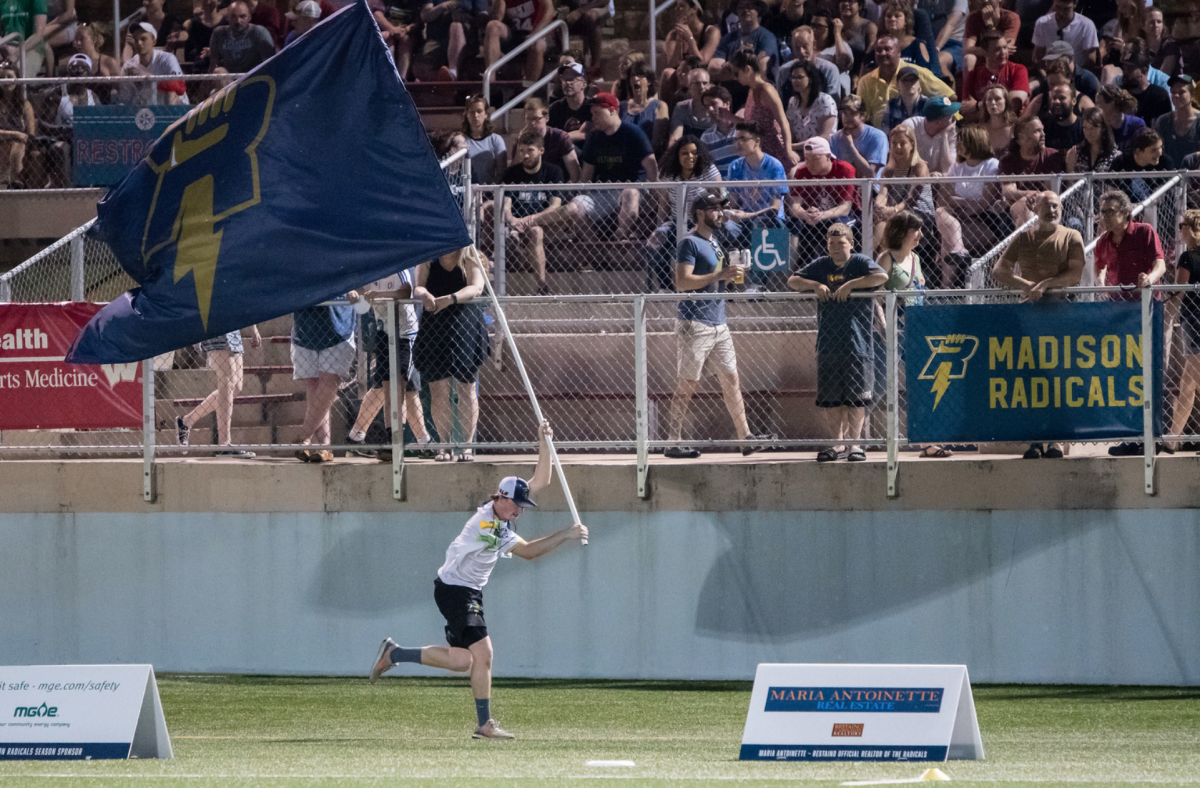 This is a team that has prided itself on creating a system where the whole is greater than the sum of its parts. But they have also relied on standout performers to elevate their games in key moments. Now, they no longer have Jay Froude, Abe Coffin, or Brian Hart, all who were able to change games with their athleticism.  Their aging O-line, with five guys in their thirties, has lacked sizzle. Peter Graffy may simply be a very good player and not the superstar that can singlehandedly carry a team for quarters at a time. New additions like Tarik Akyuz, Kyle Weigand, and Anson Reppermund have been decent role players but nowhere near the All-AUDL conversation. The strategies that have repeatedly stifled Indy and Chicago have not worked nearly as well against Dallas, San Francisco, or Raleigh.

The Radicals have reached an intersection. One way or another, Saturday’s embarrassing loss will serve as a turning point. Remember how Toronto got destroyed by DC early last season? The Rush’s 32-21 loss prompted an introspective organizational review, and the team rallied back from a 1-2 start to win 12 of their next 13 games, including an epic performance against the same Dallas team that had beaten them handily the year before at Championship Weekend. Toronto earned buckets of praise for the tremendously clutch and high-level play, culminating with a narrow 30-29 loss to the loaded San Francisco FlameThrowers in the finals.

That’s the roadmap for Madison to try and emulate. Maybe the Radicals can add a key free agent or two to bolster the roster, a la Toronto picking up Darren Wu and Justin Foord in years past. More likely, the Rads simply need to focus on maximizing their considerable potential. To do that, changes to the status quo may be required. Individual roles should shift or evolve. Some players simply have to raise their game.

In 75 days, an AUDL champion will be crowned at Breese Stevens Field. If the Radicals can learn from the Raleigh game and make some dramatic adjustments, it could be them. Otherwise, it will be another long Wisconsin winter for the loyal Radical fans who dream of seeing their small-town team hoist ultimate’s greatest prize.

Writing while traveling is always a challenge, and this particular Tuesday after College Nationals finds the author in transit following an ultimate-filled Memorial Day Weekend. After an exhilarating and exhausting four days under the sun in Milwaukee and Madison, here’s an abbreviated look at what else transpired throughout a seven-game Week 9 in the AUDL:

The North Carolina ultimate community need not go holiday shopping anytime soon. They earned their fair share of sweet memories and gold medals this past weekend.

As Raleigh Coach Mike DeNardis said on Twitter, “Not gonna lie, this weekend was straight up frisbee Christmas.”

After Mike DeNardis, David Allison, and Jonathan Nethercutt coached the University of North Carolina to three pool play wins on Friday and Saturday and then walloped the Radicals on Saturday night, the multitasking masterminds helped engineer three more victories on Sunday and Monday, as UNC surpassed Washington 15-11 in quarters, Oregon 14-13 in semis, and Pittsburgh 14-10 in the final to win their second college title in the last four years.

Now it’s up to Denardis and the Flyers to make Christmas last all year long.

Considering the success of North Carolina youth ultimate (three YCC titles in the past four years) and UNC’s college program, it feels like it’s only a matter of time before it translates to the professional level too. The pipeline of talent continues to churn out skill and athleticism, and the Raleigh Flyers will look to capitalize on their resources in the coming months and years ahead.

As we sit here in late May 2018, no local community has created youth feeder system as strong as the North Carolina Triangle under DeNardis, Nethercutt, and others. As DarkSide showed all weekend in Milwaukee and the Flyers displayed on Saturday in Madison, their ceiling is mighty high.

The Tuesday Toss is published weekly on theAUDL.com during the season. Got a comment or question about the AUDL or the current state of ultimate? E-mail Evan Lepler at AUDLMailbag@gmail.com. Feedback can also be levied on twitter: @EvanLepler