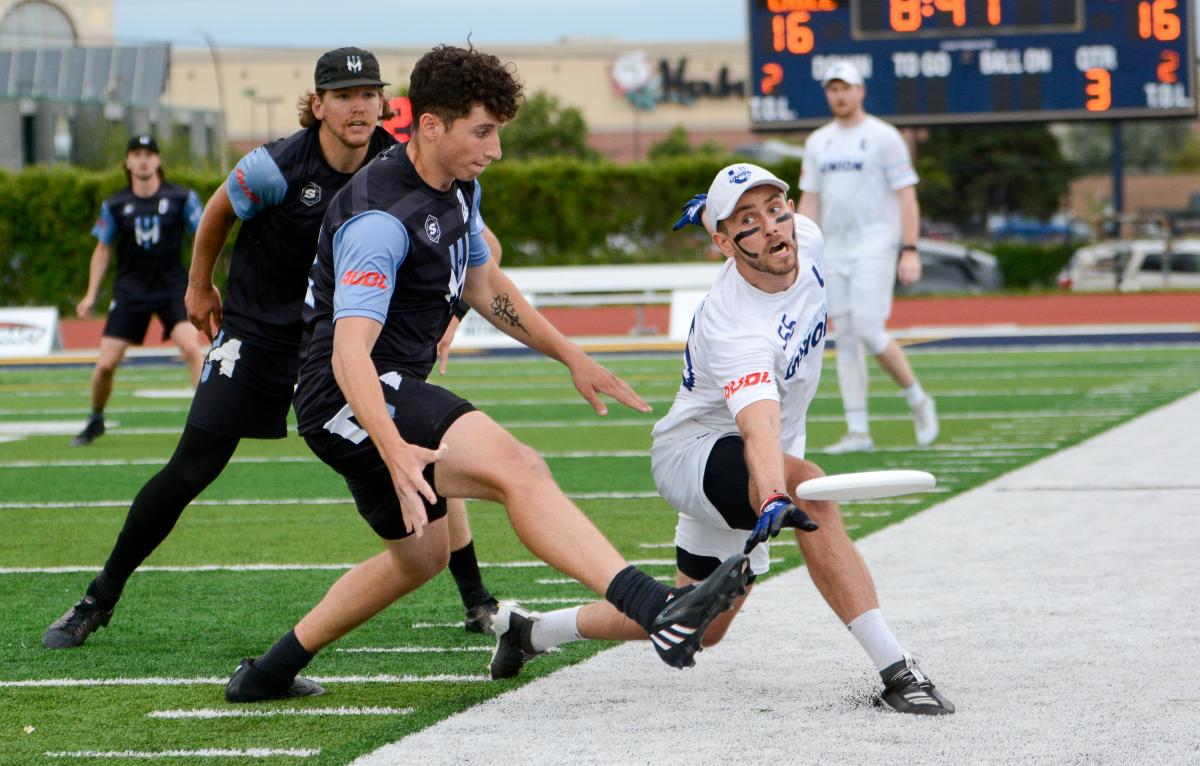 Upward trend: Offseason addition Chris Walsh has 400 or more throwing yards in four of his last five games; Detroit is 18-of-39 (46 percent) in their last four games on break opportunities, which for a whole season would place them in the top 12

Downward trend: Opposing defenses are converting 61 percent of their break opportunities against the Mechanix this season, the highest rate in the league

Upward trend: Despite splitting time almost exactly evenly between offense and defense, Billy O'Bryan leads the Cannons in scores this season; O’Bryan has multiple score performances in eight of nine games in 2022

Downward trend: Cannons are the only team in the AUDL to not score 20 goals in a game this year; Tampa Bay’s 15.4 goals per game average is the third worst of all-time*

*Note: Clock rule changes and switching from a 14-game to a 12-game regular season at beginning of 2019 drastically lowered scoring averages across the league

Upward trend: Except for his most recent start, rookie Ke'ali McCarter has multiple blocks in seven of eight games; one of just 10 players in 2022 to average 2+ blocks per game in three or more games played

Downward trend: Portland has just three breaks in their last two games; Nitro are one of just eight teams to average under a 20 percent break rate this season

Downward trend: The Legion have committed 20 or more turnovers in each of their last five games; Dallas is completing a league-worst 90.5 percent of their throws as a team

Upward trend: Seattle leads the league this year in takeaways (12.4 blocks per game); second year defender Aidan Lopez-Escarez leads the team with 14 blocks, including seven in his last four games

Downward trend: The ‘Scades have lost four in a row while giving up 25 or more turnovers in each loss; Seattle is bottom five in offensive line efficiency for the second straight season

Upward trend: Ray Tetreault is one of just 13 players this season averaging 3-plus goals and 275-plus receiving yards per game; despite scoring fewer than 20 goals five times already, Boston is still a top-12 scoring team

Downward trend: The Outlaws’ one break score against DC is the fewest they’ve had in a game since May 4, 2019 when Ottawa converted zero breaks (also against DC)

Upward trend: CJ Colicchio is averaging five scores and and nearly 490 yards of total offense in his last three games, and is currently tied for the team lead in assist (27); Pittsburgh is averaging 23.5 goals per game in their last four

Downward trend: All four of the Thunderbirds’ wins this season have come against winless teams; Pittsburgh’s offensive line efficiency ranks in the bottom six in the league for the season

Upward trend: Spiders had a season-high 16 blocks against the Shred in Week 12; rookie Wyatt Berreman finished with four blocks, his third multi-block game of the season; Berreman has a takeaway in eight of nine starts

Downward trend: Spiders turned the disc over 27 times and got outscored 12-6 at home in the second half against Salt Lake; Oakland has 20 or more turnovers in seven of nine games, and rank 21st in the league with 22.8 per game

Upward trend: James Lewis scored 10 goals in the Rush’s season finale at home; Lewis’ 50 goals this season is the most for a Toronto player since Isaiah Masek-Kelly scored 55 in 16 games in 2015

Downward trend: Toronto allowed 24.1 goals per game—third worst in the AUDL—and only held one opponent under 20 goals in a game in 2022; Rush are just one of three teams with a break rate under 16 percent

Upward trend: LA is 23-of-33 (69 percent) on hucks in their last three games; Brandon Van Deusen has 12 more hucks completions than anyone else on the team (18 total), and is completing 78 percent of his throws from deep this season

Downward trend: Aviators have given up 51 goals in their past two games—both to Colorado—and have the second highest opponent offensive efficiency rate; only Detroit’s defense is allowing opposing offense to convert at a higher rate than the Aviators

Downward trend: Madison is averaging the fewest huck completions per game (5.7); Radicals are converting just 46 percent of their offensive possessions in their last four games, which would rank fourth-worst for a full season

Upward trend: With their two-goal win in Madison last Friday, Indy won their second-ever season series against their longtime rivals the Radicals; if Cameron Brock holds at his current goals per game average for the final two games, he will win his third regular season goal scoring title, nearly 10 years after his last one (2014)

Downward trend: Indy’s offense is just 22-of-50 (44 percent) on offensive possessions their last two games; ‘Cats are giving up the eighth most break scores per game (6.6)

Upward trend: Since joining Atlanta in 2019, Elijah Jaime has 127 goals in 32 regular season games; Jaime has just one turnover in 2022, a single drop he committed on June 11 against Tampa Bay

Downward trend: In six games this season against non-Cannons opponents, the Hustle are 53-of-74 (71.6 percent) in the red zone, which would rank third worst for an entire season

Upward trend: Philly clinched their first playoff appearance since 2013 with the win in Toronto; Sean Mott is averaging 3.9 assists per game over his last 62 games going back to the beginning of the 2017 season; Mott has not missed a start since 2015

Downward trend: The Phoenix led the league in blocks per game through the first seven games (12.7 per game), but are averaging just 7.7 in their last three

Downward trend: Minnesota has lost two straight after their seven-game win streak; Wind Chill’s defense has just 14 break opportunities total in their last two games after averaging 18 per game in their first eight matchups of 2022

Upward trend: Growlers are now 6-1 with Goose Helton in the lineup this season; SD is 23-of-27 (85 percent) on hucks in their last four games with Goose active; San Diego committed a season-low 11 turnovers against the top defense in the West in Week 12

Downward trend: San Diego’s defensive line efficiency (36.9 percent break conversion rate) is the worst of any team with a winning record this season, and 20th overall in the AUDL

Upward trend: Jordan Kerr is averaging 6.9 assists per game this season, nearly 1.5 assists better than the second highest mark among qualified players; Kerr is currently on pace to set the single-season assist rate record, recording an assist on nearly 30 percent of his points played

Downward trend: Shred tied a season high with 24 turnovers in Oakland in Week 12; Salt Lake had their third game in five outings where they converted 50 percent or fewer of their offensive possessions

Upward trend: The Sol are averaging nine break scores per game in their last four games; Austin has won five in a row since losing in Chicago on June 17; Mark Evans is averaging 5.8 scores and 393 yards of total offense in his first season with the team

Downward trend: Austin yields the third most huck completions per game (9.6), which has allowed opponents to trade punches at times with the Sol

Upward trend: Even without Eli Artemakis available, Chicago scored 27 goals against a top tier Minnesota defense in Week 12; Jeff Weis is one of just nine players averaging over 300 receiving yards per game this year

Downward trend: Since holding Pittsburgh to just eight goals in Week 1, the Union are allowing 21.4 goals per game

Upward trend: Alexandre Fall had four blocks in two games in Week 12, and is now averaging one takeaway per game in nine starts; DC is averaging 11.8 blocks per game in their last five games (5-0)

Downward trend: Breeze are just 2-2 against their East Division playoff challengers from Philly and New York, with their two wins over Philly coming by just a single goal in each matchup

Upward trend: With nearly 2,000 yards of offense in Week 12, Jonathan Nethercutt now leads the league in total yardage (6,697) and is second in assists (58) with one game to play; since the additions of the West and South divisions in 2014 and 2015, respectively, Colorado is just the sixth expansion team to reach 10 wins in their inaugural season

Upward trend: Carolina is 72-20 in the regular season all-time; Alex Davis becomes the fourth player in Flyers history to top 50 goals in a season; Terrence Mitchell finished the regular season with 45 scores, 3,113 total yards, six throwaways, and not a single drop

Downward trend: The Flyers have over a month between their last regular season game, and hosting the South Division Championship on August 20

Upward trend: With a win in Philly tomorrow night, New York can become the first franchise in league history to have two different undefeated regular seasons; despite splitting nearly half his playing time on defense this season, Ben Jagt is top five in total scores (73); the only player besides Jagt in the top 75 in scores this season with over 100 defensive points played is Kevin Pettit-Scantling

Downward trend: Jack Williams is just 2-of-11 on hucks this season, proving everyone is at least a little bit mortal on this roster