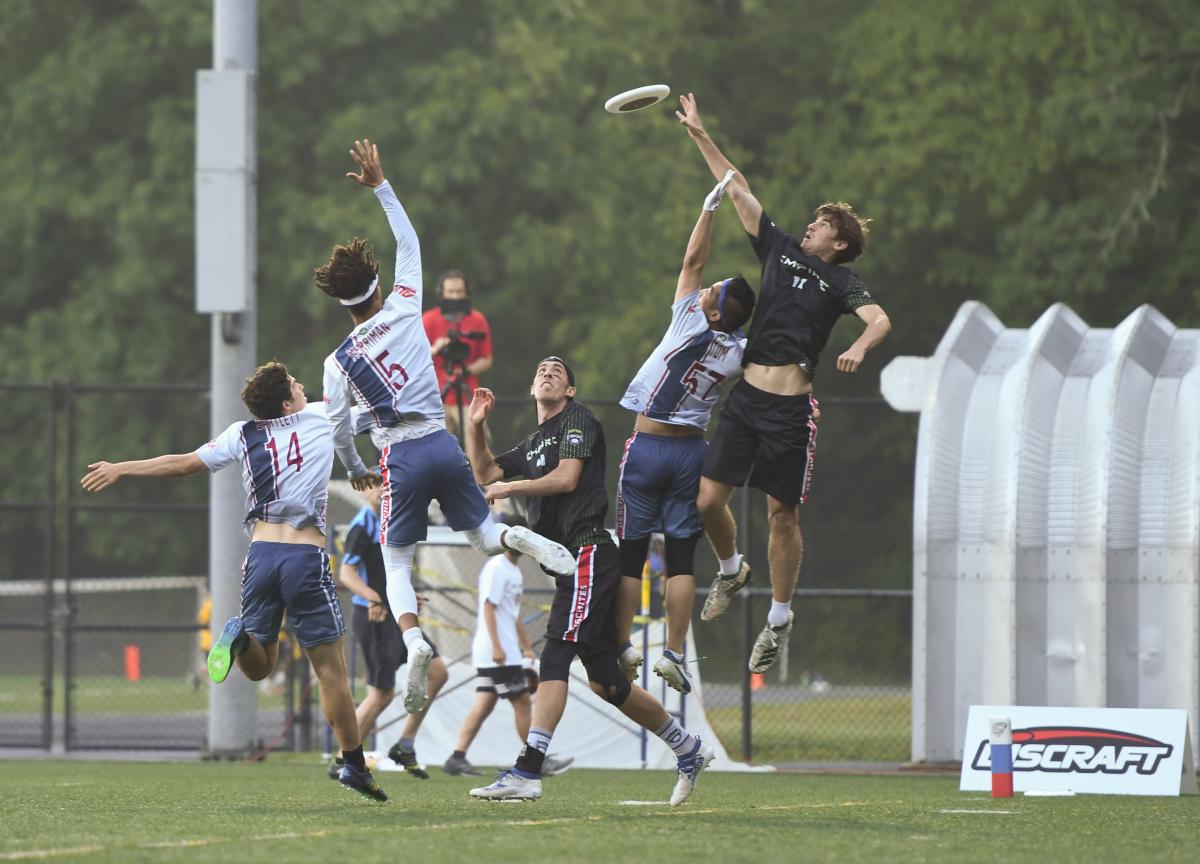 Some jockeying, but not much overall change in the ladder after Week 4. But as teams round into midseason form, the separation between contenders and pretenders will become more apparent.

It’s almost perfunctory at this point to mention that Detroit dropped both of their games on the road in Week 4, so let’s focus on the effortlessness of Andrew Sjogren’s receiving dominance through the first month of the season. The Mechanix star leads the league in goals (29), goals per game (4.83), receiving yards (2361), and receiving yards per game (394). Sjogren already has two different 8-goal games in 2021, and has already equaled his career high for a single season.

The winless Thunderbirds host the Phoenix at home this Saturday after a bye week to recalibrate. Despite the team’s struggles with turnovers as a whole, Thomas Edmonds continues to be one of the most efficient offensive players in the league, completing 96.60 percent of his 145 throws, but his potency as a scorer has dipped, coinciding with Pittsburgh’s own offensive woes. Edmonds averaged 4.1 assists and 2.6 goals per game in 2019, compared to just 2.3 and 1.3 this season, respectively.

The Cannons offense continues to produce highlights, but little in the way of scores, as Tampa Bay put up just 35 goals combined in their two-game winless road trip. The team ranks dead last in completion percentage, and they still have yet to score 20-plus in a game in 2021. But second year player Unmil Patel has emerged as a quality downfield target this season, and has some of the surest hands in the Atlantic, putting up eight goals on the weekend.

Indy got thumped at home by Chicago, and surrendered 28 goals on the night, the most goals the AlleyCats have allowed in a game since 2017. The midseason return from retirement of all-time goal leader Cameron Brock will likely help solidify the offense, but it’s the defense that has displaced the 2019 Central Division champions from atop the standings. Indianapolis had a top four scoring defense in 2019, but after giving up 20-plus goals in four of their five games in 2021, they rank in the bottom six of the league.

The Aviators had an opportunity at home against a shortened roster to jump to an early lead against Dallas. But a series of gut-punching turnovers on the goal line stymied Los Angeles’ chance at the upset, and dropped the team to a 1-4 record, good for last place in the West. And while the mistakes at the beginning of the season seemed like bugs in the system for Los Angeles, they’ve started to become a part of the team’s identity with over a third of their schedule already played; the Aviators are fourth worst in the AUDL in turnovers per game. Similar to Pittsburgh: The playmaking is there, but the execution is still a little lacking.

After Sunday’s rout of the Mechanix at home, two of Madison’s three wins of the season have come against, well, Detroit. Now Madison must face their longtime and acutely painful rivals from Chicago, who will be deploying a lineup stocked with former Radicals stars. Victor Luo is quietly having a great season, ranking in the top 10 in the league in assists (17) while averaging over 350 yards of total offense per game. He will need to have a big game for the Radicals to succeed. But the x-factor for Madison has been the emergence of Sterling Knoche as a receiving target, who has 12 goals in his last two games.

San Jose finally reversed the tides of their early season first quarter woes, scoring nine goals in the opening frame before hanging on for the 28-23 win over Austin. Veterans Sawyer Thompson, Justin Norden, and Andrew Moore all had good offensive performances, but it continues to be rookie Jordan Kerr who impresses the most. And after his four-block performance on Saturday, Kerr leads the team in assists (11) and blocks (6), while placing top three in virtually every other major statistical category after just his first month of professional disc.

It sounds stranger than fiction, but: After Friday’s impressive dispatching of the surging Sol in Seattle, the young Cascades are now just two fourth quarter collapses away from being 4-0 in 2021. To say that this team gets it done with a lot of moxie, at this point, would be to describe water as wet: They are clearly a sum that is greater than its parts. But two parts in particular that had it going on were Manny Eckert and Ben Snell, who combined for over 1100 yards of total offense in the win, and made much of the Cascades offensive possessions look easy; Snell is averaging 5-plus scores and over 500 yards of total offense in his two games so far this season.

The Phoenix played anxious and tight from the start in their Friday night loss to Raleigh, and the elements just rubbed salt in the wound in their eventual 23-11 defeat. Saturday’s seven-goal loss in Atlanta cannot be told by simply looking at the final scoreboard, as Philly played even for much of the game before the Hustle defense clamped down in the second half. But both losses were illustrative of the gap between Philly’s aspirations as a playoff contender, and the teams that sit above them in the Atlantic Division.

Austin entered Week 4 with a good chance at 4-0 and the division lead coming out the other end. But giving up 56 goals in two games on the road is why Austin now sits at 2-2 and with a lot of questions. Was their Week 2 win over Dallas indicative of this Austin team’s true potential, or just amplified effort because of the rivalry with the Roughnecks? Can the Sol defense hold a team under 20 goals in a game? Is their best enough to unseat Dallas or San Diego from one of the two playoff spots in the West? Tomorrow night’s hosting of the Cascades suddenly becomes pivotal for the Sol’s playoff chances.

After a three-game losing streak against three power teams in Atlanta, Raleigh, and DC, the Glory got back on track with a seven-goal win at home over Tampa Bay. The Boston offense continues to click just five games into their franchise’s tenure, ranking fourth in the AUDL in scoring averaging just over 23 goals per game. Benjamin Sadok and Tanner Halkyard both individually rank in the league’s top 10 in assists and goals, and definitely look like the most potent offensive duo in the league after the first month of play. But for Boston to edge into the playoff picture in the Atlantic, their defense will have to continue to improve.

Minnesota improved to 3-1 on the season with the home win over Detroit, but the real storyline of the game was the return of Josh Klane. After missing nearly the first month of play recovering from shoulder surgery, Klane stepped right back into solid minutes and touches, throwing four assists on 22 completions in 18 points of play. The Wind Chill have effectively carved out their position as number two in the Central, but this Wind Chill team envisions itself challenging the Union at the top of the standings, and to do that, they will need a fully functional Klane.

Is Dallas the seventh best team in the league? Absolutely not. They are much better than this current ranking would indicate. But after having the disc—tied and under a minute to play—and failing to execute on the final drive, the Roughnecks find themselves with two losses on their record earlier than at any point in franchise history. But there is no reason to panic, either, as those two defeats came by a combined two goals. Chris Mazur showed why he’s a top 10 thrower in the league when in rhythm, and Jay Froude currently ranks second in the league in goals per game.

WIth the weather acting as an eighth defender, the Flyers defense converted break after merciless break in the rain in the first half to take an insurmountable 12-3 lead. The Flyers defense is still looking to generate more takeaways, but their Noah Saul led counterattack converts on the break opportunities they get. Offensively, the Flyers are really starting to click, and have scored 23-plus goals in each of their last three games; the team ranks fifth in the AUDL at 23 per game. Henry Fisher still leads the team in receiving yards, but Anders Juengs has been the spark plug for the Flyers O-line and is an assassin when the team moves into the red zone.

The Empire moved to 3-0 with another wire-to-wire win, this time over the Cannons. But despite their 18-game winning streak, something about New York seems out of rhythm. They have the lowest team completion rate (93.50 percent) of any team with a winning record in 2021, and they struggle defensively to generate turnovers; only Detroit and Los Angeles rank lower than New York’s 7.3 blocks per game, which is a bizarre thing to type out for a defensive lineup that includes Jeff Babbitt and the league’s all-time blocks leader Mike Drost. This New York franchise built its foundation on defensive intensity, and they will need that tomorrow night on the road against a firing-on-all-cylinders DC offense.

It took a scoreless night from Rowan McDonnell and a last second buzzer beater miracle in Week 1 for New York to beat the Breeze at home, so DC and their number one offense have to feel tremendously good heading into tomorrow night’s matchup. Zach Norrbom and Jonny Malks are coming off of one of the best throwing months of any backfield duos ever, combining for 22 assists and over 250 completions compared to just two total turnovers. Two! Every part of the Breeze offense is flourishing this season, but it’s those two that are initiating the action.

It would be easy to telescope in and rave about the individual performances of Travis Dunn, Goose Helton, Tim Okita, or the late-game heroics from Paul Lally. But what really made San Diego’s triumph over Dallas so impressive was the collective effort from the Growlers as a whole. The defense got just six opportunities for a break, but converted a tidy four of them on the night; the San Diego defense struggled in the first four games of the season to punch in their chances, and the turnaround made all the difference against a formidable Roughnecks opponent.

Rookie Tim Schoch got a handblock-to-Callahan combo, Nate Goff pretty much jumped over a guy, and Pawel Janas set the single-game yardage record for the season so, yes, things are living up to expectations in Chicago. Tomorrow night they host Madison, and for all appearances, the Union want a big win over the longtime kings of the division. Former Radicals Pat Shriwise and Peter Graffy are on the active roster, and this particular matchup feels like a potential breakout game for Graffy.

Adding John Stubbs to an already high octane Hustle offense really puts it into a championship tier; there are few players in the sport with his combination of efficiency and playmaking. But it continues to be the defense that defines this Hustle team’s wins. The visiting Phoenix scored eight goals in the first quarter before the Atlanta defense tightened, limiting Philly to just five total goals in the second half. The real turning point came at the end of the third quarter, when Michael Fairley had a houdini block from the backside of a Philly receiver. Moments later, a Stubbs fastball into the corner of the endzone as the clock ticked down found a streaking Fairley for the bookends and the momentum. Regardless of the opponent, the Hustle find ways to win.