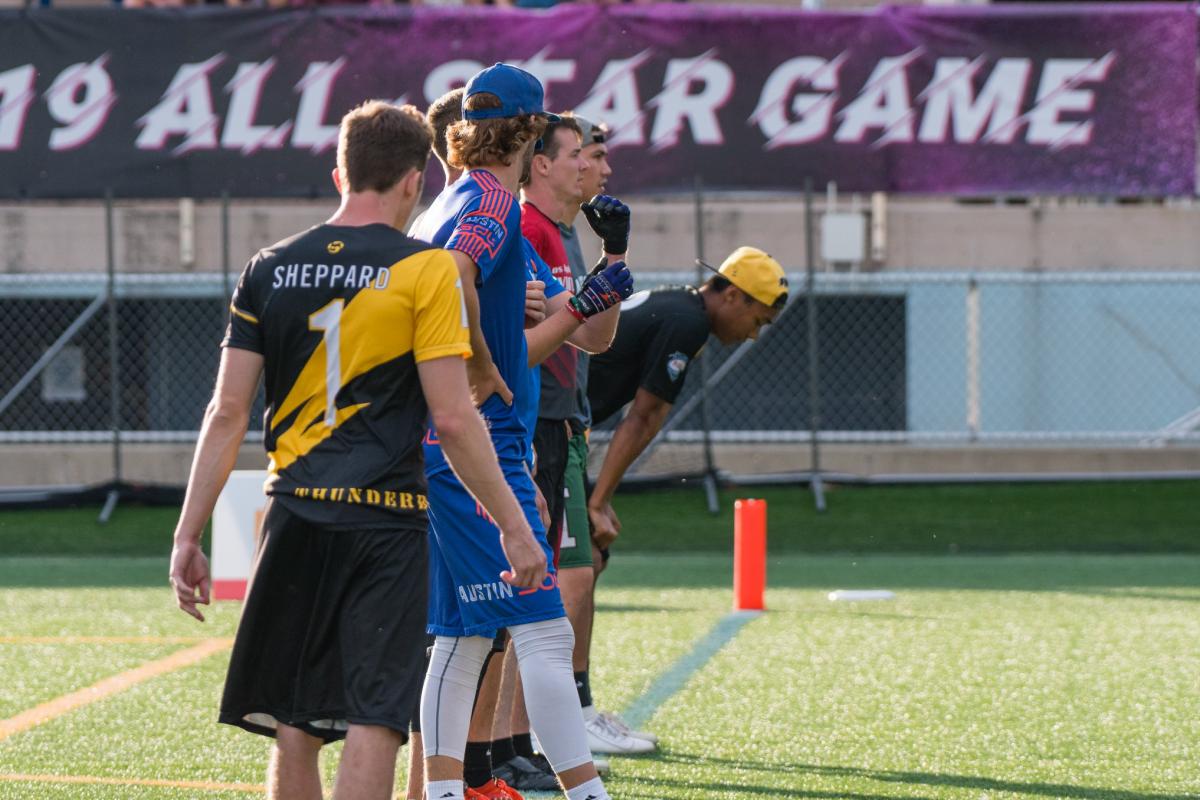 With the 2020 AUDL season now officially cancelled, new television partner Fox Sports will continue to re-air many of the league’s classic games from years past. Next up is the unforgettable 2019 All-Star Game, which featured players from all 21 teams competing in a double overtime classic at Madison’s Breese Stevens Field. Here’s what I most remember about the build-up and aftermath from that particular experience.

Before the two overtimes and the Janas-Jagt dance off and the Skills Challenge and even the Wednesday night live draft that divvied up the teams, the AUDL’s top players had to be selected as all-stars. This was a multi-prong process that set the stage for the entire experience, giving 32 individuals the opportunity to showcase their abilities amongst their fellow stars. Initially, the league’s coaches chose the representatives in their respective divisions, designating one player per team as an all-star. Madison, as the host, had the privilege of anointing an additional quartet to help flesh out the rosters. And that’s right around when I stepped in, bestowed the daunting challenge of being part of the panel that would decide the remaining wild card participants. 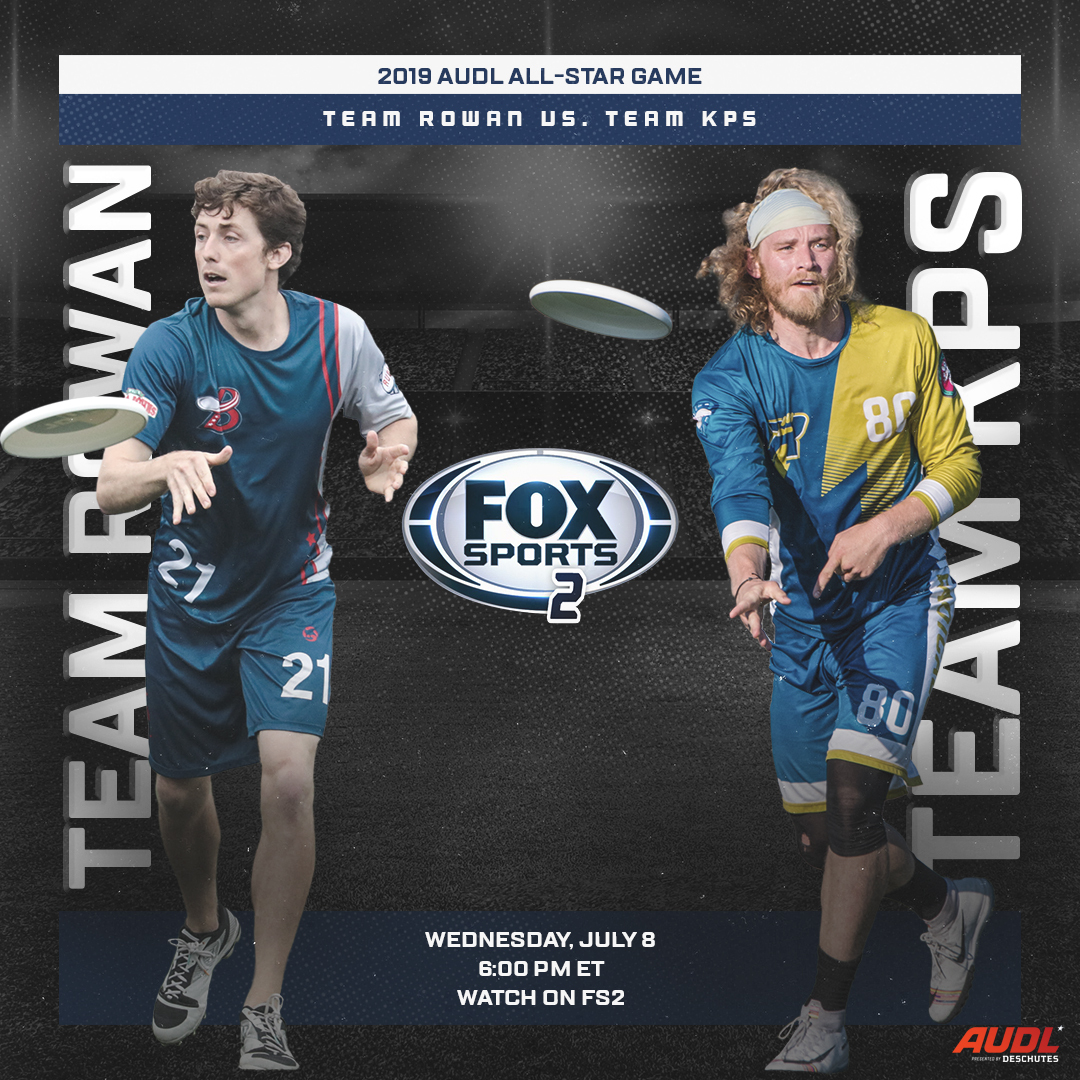 It’s always an honor to be involved in these types of meaningful conversations, but obviously it’s not an easy task, and the job of determining who would forever be remembered as all-stars was not a responsibility that we took lightly. Over the course of many conversations, our panel weighed dozens of variables to try and and make the right calls. Eventually, here’s how the rosters broke down: 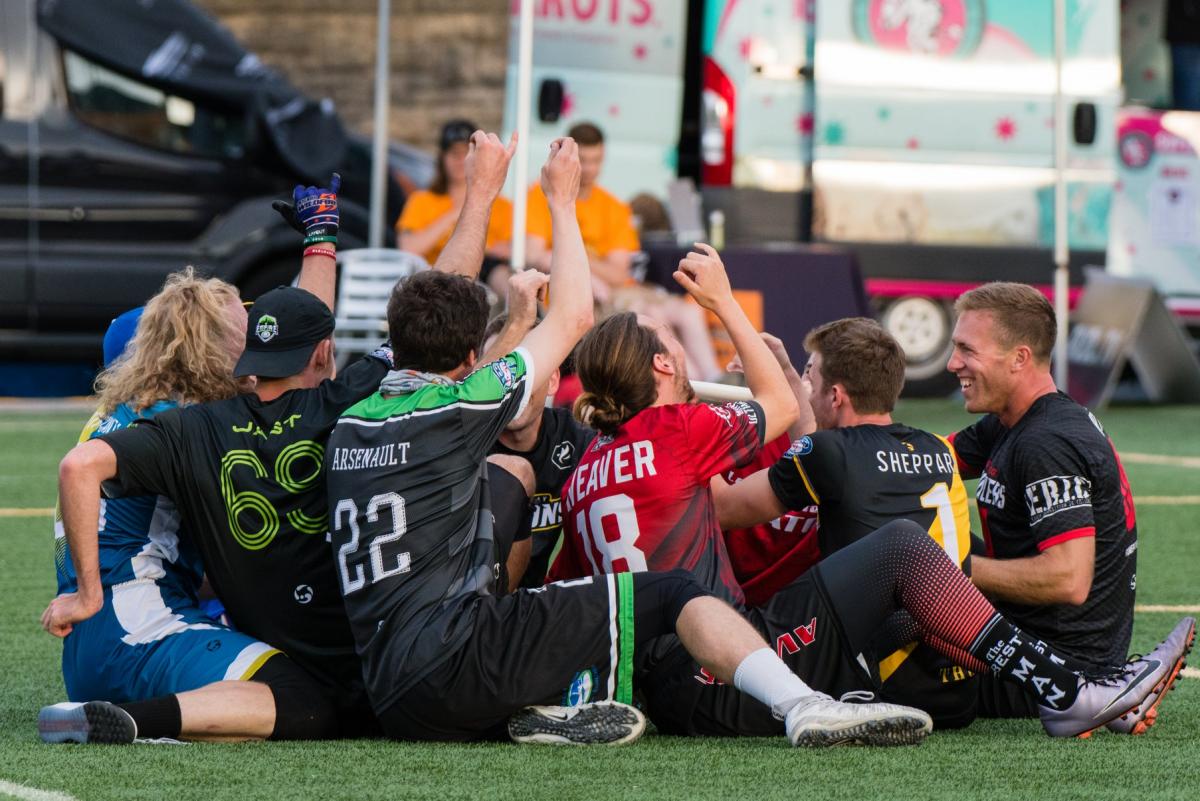 That was 31 of the 32 players. The final slot was preserved for a fan vote, featuring Indy’s Cameron Brock, Raleigh’s Terrence Mitchell, LA’s Joc Jimenez, and Toronto’s Akifumi Muraoka. After more than 7,000 votes were cast, Jimenez (41.4 percent) narrowly edged Muraoka (37.3 percent) for the last available spot in the game.

Once the entire player pool was set, the live draft became the next order of business, as McDonnell and I flew into Madison the Wednesday before the game to join KPS on a makeshift studio set for the divvying festivities. None of us entirely knew what to expect, but I think I speak for all when I say we had a blast The coolest dynamic was probably getting to video-chat briefly with each player right after they were selected, a pre-pandemic showcase of High Five’s seamless telecommunications technology. Rowan drafted Froude with the opening pick, KPS followed by snagging Jagt, and the intriguing experiment continued until the two sides were set. 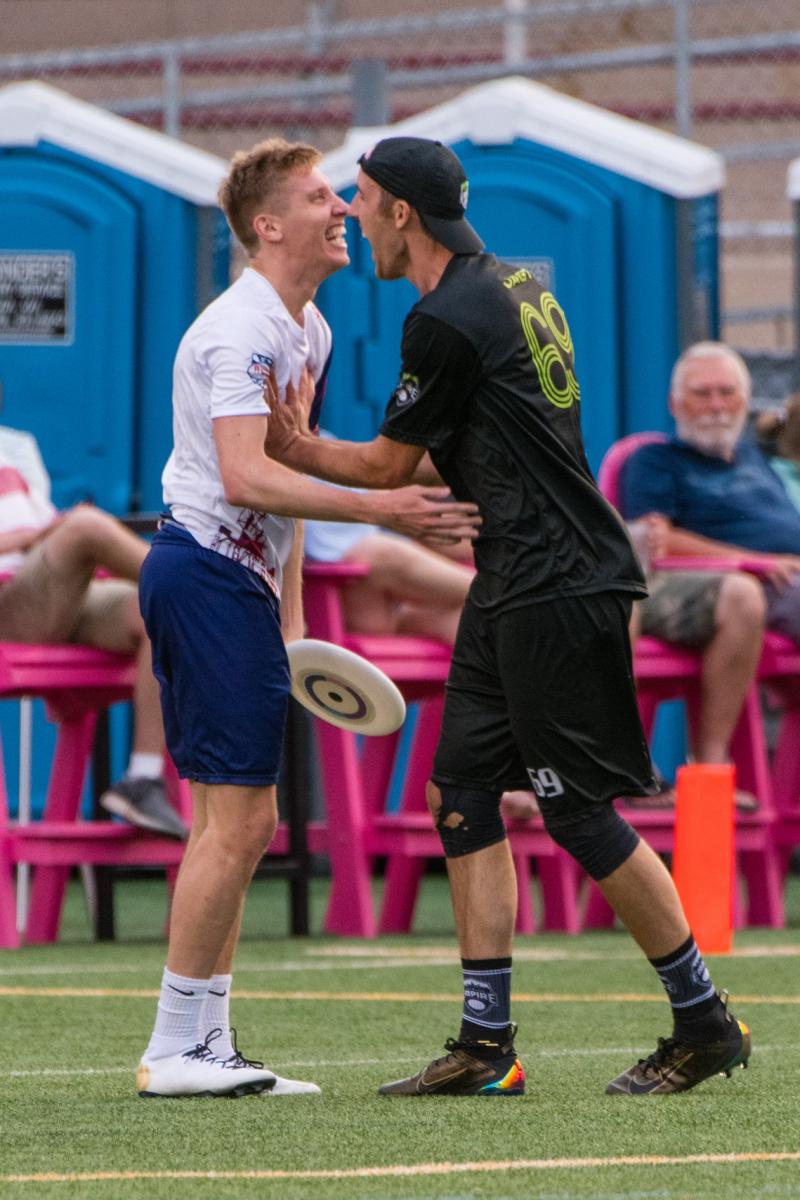 On Friday night, as the rest of the all-stars gradually arrived into town, many congregated at a low-key bar. Remember when this was still a safe thing to do?

There was a cool vibe in the air that night, with players of all different ages, backgrounds, and levels of gregariousness coming together for an unprecedented ultimate experience. How hard would everyone play? How intense would the actual game be? None of the all-stars knew exactly what to expect, but the anticipation felt special. Regardless of how it was gonna play out, everyone realized that history was being made.

Matt Smith, the AUDL’s Director of Camps and Clinics, organized a busy Saturday morning of youth activities at Breese Stevens Field, enlisting many of his fellow All-Stars to help lead these programs. Later that afternoon, eight players competed in the premier Skills Challenge, striving for accuracy, distance, and quickness in a four-event competition that Froude, the top pick in Wednesday’s draft, ended up winning. It already felt like a full week of fun events, and the opening pull on Saturday night still had yet to be launched.

When the actual game finally began, it became apparent pretty quickly that, in terms of offering a compelling flow with highlights and excitement, it was going to work. That’s a credit to the competitors, who all seemingly started the game focused and determined to represent themselves and the league with respect. The intensity was moderately high at the start, but ramped up considerably as the night progressed. Unlike the no-defense All-Star contests that we’ve all become accustomed to in the NBA and NFL, the AUDL participants made this feel very much like a real game that happened to have all the best players in it. Including all 21 teams’ jerseys on the same field for the first time also felt significant, a recognition of the league’s brand, growth, and prestige. 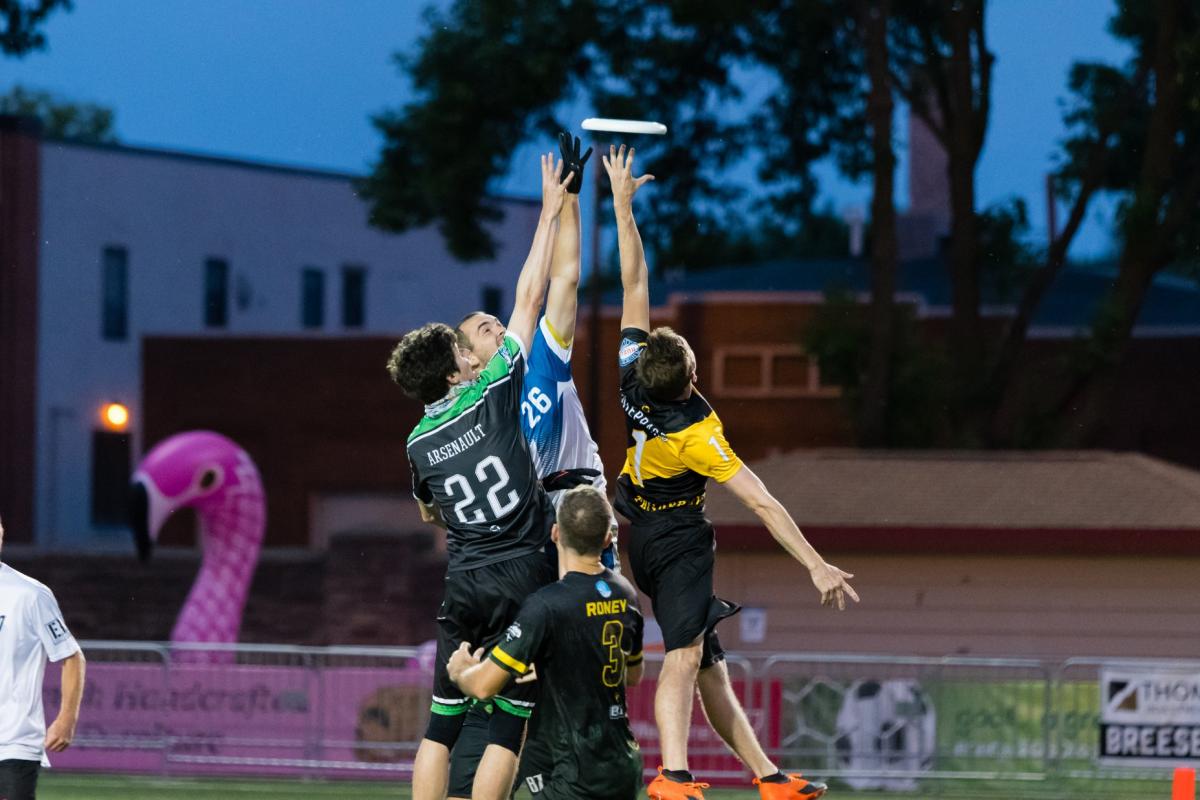 As for specific moments to remember, there were too many to specifically mention here. By the end of the night, every single player had at least one play that showcased their skillsets, from MVP Max Sheppard’s cross-field hammers to Cam Harris’ buzzer-beating snag to Henry Fisher’s breakaway speed. The fact that the action culminated with more drama than any of us could have imagined was just additional icing on the cake, as the conclusions of regulation, overtime, and double OT tested our collective nerves in captivating fashion. In reality, this was just an exhibition, but the stakes felt very real as we watched it unfold, as Beau Kittredge desperately laid out towards Antoine Davis, as Ben Jagt threw his body into Rowan McDonnell’s hucking lane in anticipation of a high-velocity flick. Andrew Roney and Matt Smith each had their own memorable layouts, while Jeff Babbitt, Quentin Bonnaud, and Khalif El-Salaam all had their moments skying for scores.

When I boarded a flight back home on Sunday morning and contemplated how best to capture the flavor and mystique of the entire experience, I decided the ideal way would share the direct emotions and feelings of the players themselves. Hence, that week’s Tuesday Toss became The Oral History of the First AUDL All-Star Game, and re-reading it brings back a powerful flurry of memories from the historic and unprecedented event.

Of course, there’s no better way to relive the All-Star spectacle than to watch it again in full on national television. Just so happens, that becomes possible today.

The inaugural AUDL All-Star Game from June 8, 2019 premieres on FS2 today (on Wednesday, July 8) at 6:00 PM/ET. This broadcast will also be immediately preceded by an encore presentation of the 2018 Week 3 thriller between the Los Angeles Aviators and the Austin Sol, beginning at 3:30 PM/ET on FS2.