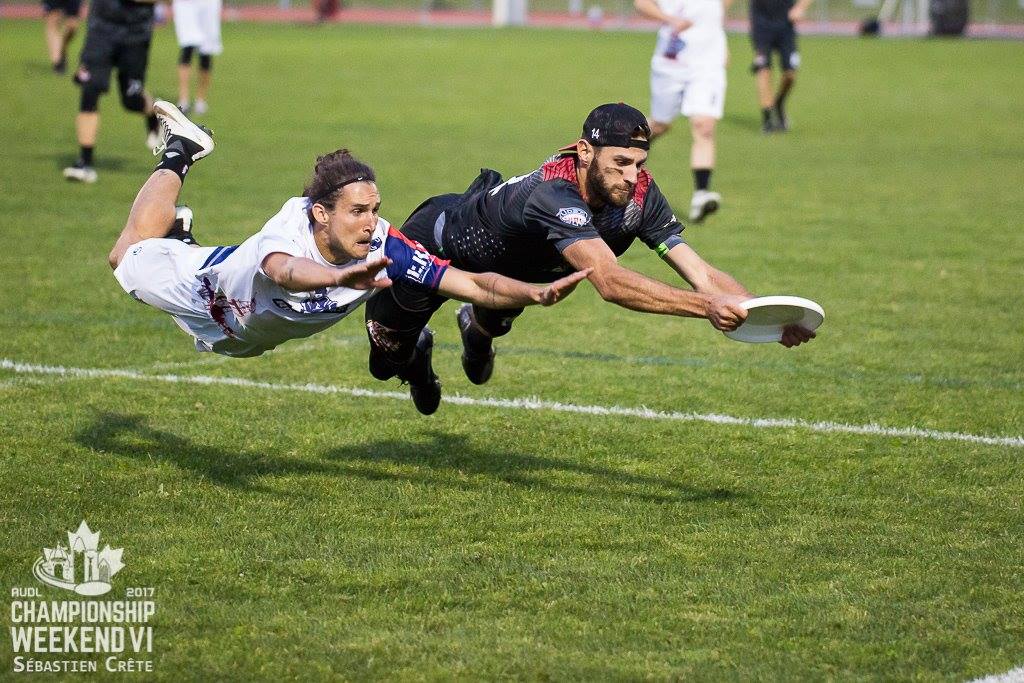 With the 2020 AUDL season on hold, new television partner Fox Sports has chosen to re-air many of the league’s classic games from years past. Next up is the 2017 semifinal battle between the Toronto Rush and the Dallas Roughnecks. Here’s what I most remember about the build-up and aftermath from that particular title showdown.

It was just three years ago—though it kinda feels like 30 years ago with how time’s slowed in our current reality—where we witnessed the greatest upset in AUDL postseason history. I’m not sure it’s been characterized that way before, but I’m here to make the case that Toronto’s performance over the final three quarters against Dallas on that late-August Saturday evening in Montreal rank among the most spectacular sequences we have ever enjoyed in the history of professional ultimate. 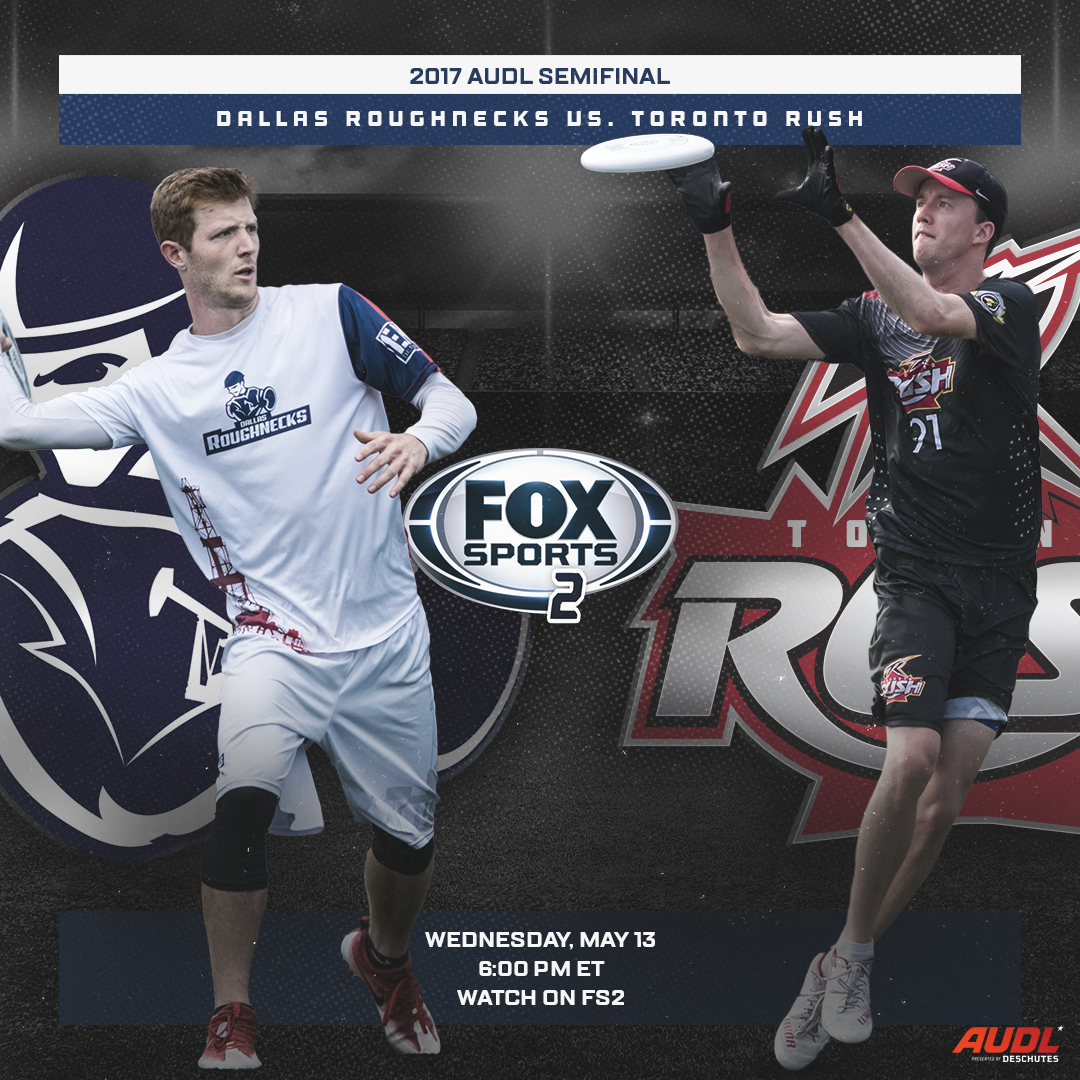 In order to understand the context, let’s start with the Roughnecks’ dominance over the league up to that point. Since entering the AUDL in 2016, Dallas had gone 27-3, outscoring their opponents by a remarkable 230 goals over the 30-game run. Obviously, they completed a perfect championship season in their first year before suffering three losses in the 2017 regular season, however none of those setbacks significantly shifted the perspective that the Roughnecks remained among the most talented all-around teams in league history, especially with Kurt Gibson returning from injury late in the season for the playoff run.

The three regular season stumbles came against Jacksonville (twice) and Raleigh, but of course Dallas got revenge when it counted, peaking in the postseason to re-establish their South Division superiority. First, the Roughnecks clobbered the Cannons, 22-12, and then they traveled to North Carolina and flummoxed the 13-1 Flyers enough to prevail 27-24. It was a brilliant team effort, with the Roughnecks getting contributions from so many different players; no one had more than four goals or four assists in that South Division final, but the balanced attack ended Jonathan Nethercutt’s MVP season one step shy of the Final Four.

While the Roughnecks had lost Cassidy Rasmussen and Beau Kittredge from their undefeated team the year before, they still possessed an uncanny mix of superstars and ultra-high level role players. Gibson, Dylan Freechild, and Jimmy Mickle were the biggest names, but Chris Mazur, Jay Froude, and Abe Coffin also carried plenty of sizzle in the star department. Then you had (in no particular order) Ben Lohre, Stanley Peterson, Kai Marshall, Dan Emmons, Dalton Smith, Matt Bennett, Matt Jackson, Chris Larberg, Dillon Larberg, Brandon Malecek, Ben Lewis, and Thomas Slack. Don’t be mistaken: this team was not significantly weaker than the squad that went 17-0 in 2016. In fact, there were some folks around the organization who thought they were actually better than the inaugural roster, with more proven depth, balance, and AUDL experience. 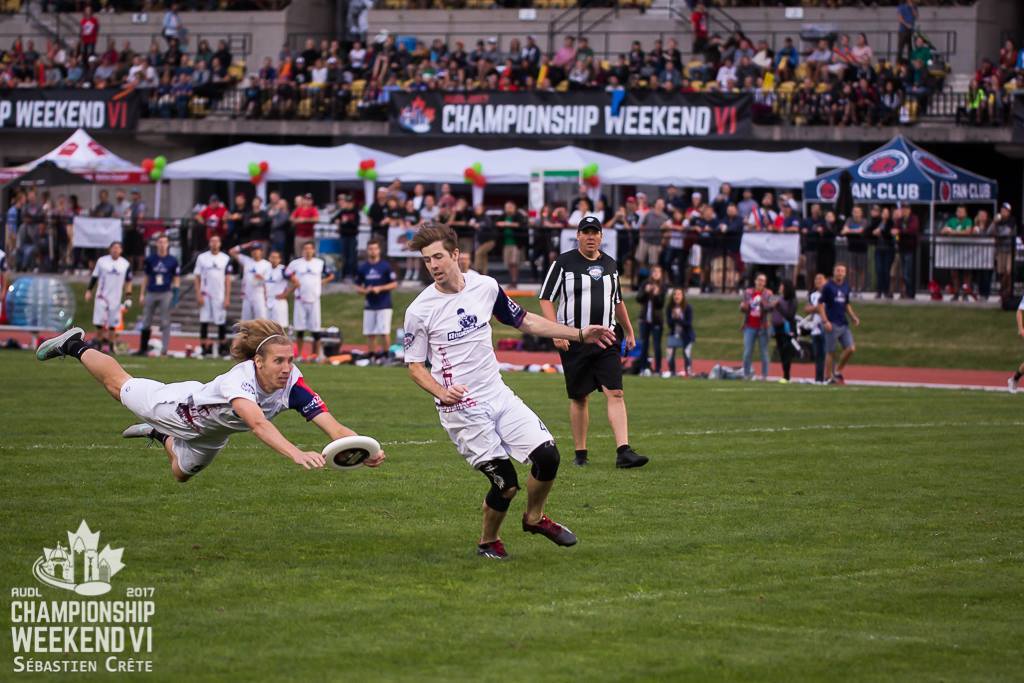 So that’s a quick glimpse at the Roughnecks team that arrived to Montreal for Championship Weekend, determined to win their second straight title. And for the second year in a row, they would intersect with Toronto in the semifinals. In 2016 in Madison, the Roughnecks had surpassed the Rush 27-20 in a game that was certainly overshadowed by the shocking second semi that unfolded later that night. Everyone was blown away by the mesmerizing Cascades-Radicals thriller, leaving undefeated Dallas’s clinical performance against Toronto as a relatively ho-hum, surprise-free affair, a game in which the Roughnecks jumped ahead 3-0 and never looked back, maintaining their multi-goal lead throughout. While the most memorable moment from that game probably came courtesy of Toronto’s Mark Lloyd—a brilliant in-field buzzer-beating greatest to close out the third quarter—the Roughnecks were never in serious jeopardy in that first matchup against the Rush, further evidence for those in the camp that the 2017 semi would yield a similar result

Shifting to the Toronto perspective, it’s worth mentioning, as an excuse, explanation, or however else you want to characterize it, the 2016 Rush roster was notably shorthanded at Championship Weekend. They were missing at least half a dozen contributors that could have made a difference, but what would that difference have been? Presumably, it was the difference between losing by two or three versus seven or eight. Even at full strength, I cannot imagine many outside of Ontario would have predicted the Rush over the Roughnecks.

Consequently, a year later, that prevailing sentiment lingered. Sure, the Rush arrived with a very different team—nearly half of the active 20-man roster was different from 2016 to 2017—but few imagined those differences would alter the end-result. I remember going out on a limb during our pregame coverage by saying I expected a much closer game than the previous year, an assertion that surprised some people, but I never pulled the trigger and predicted the Rush would actually win the game. And when Dallas scored six of the first eight goals, Toronto’s win probability, which already was well shy of 50 percent entering the game, seemingly dipped into single digits. As I wrote last week in the 2017 Championship Game retro-preview, quite frankly, a Dallas-San Francisco final felt inevitable. 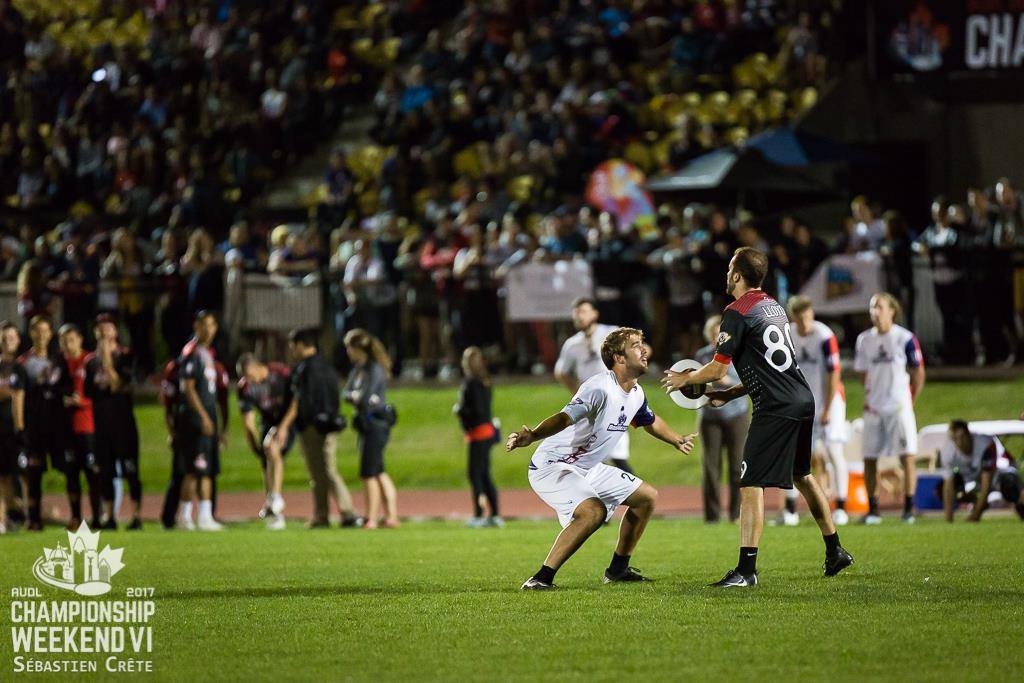 It’s also relevant that, as the first quarter transpired, it remained consistent with past Championship Weekend experiences. Though, it never was quite as simple as Beau Kittredge vs. Toronto, that convenient narrative basically covered each of the three previous years, as Kittredge and his squads humbled the Rush over and over again. In 2014, Kittredge and his San Jose Spiders stormed in front quickly and never looked back, cruising to a 28-18 victory in the tittle game in front of Toronto’s fans. A year later in 2015, the Rush were more competitive on San Jose’s home turf, but still never led for a single second in the 25-20 loss against the Spiders in the semis. And we already covered the 2016 semifinal showdown, meaning that in their last three Championship Weekend contests, the Rush had been outscored 80-58. Moreover, Toronto had never led at any point in those three games.

Therefore, the early 6-2 deficit—though disappointing for those of us who both wanted and prognosticated a close game—followed the form we had grown accustomed to. Digging a bit deeper, however, the Rush did have a couple early break chances against the Roughnecks during that opening quarter. They were unable to punch them in, but the fact that they got some turns against the Dallas O-line was a subtle, promising sign. More importantly, it was a harbinger of things to come. Also, whether it’s symbolic or actually meaningful could be debated, but remember that the Rush were not going against Kittredge in this particular game, as San Francisco had already locked up their spot in the finals earlier in the evening.

One thing the Rush did have on their side was the crowd, which was not a given heading into the weekend. In many sports, including ultimate, Toronto and Montreal are rivals, and it was unclear whether the Quebecois would find the empathy to cheer for their fellow Canadians, or if they would embrace the ‘anybody but Toronto’ mentality that would have rendered the Rush as villains more than heroes. Anticipating this uncertainty, the Rush made the brilliant decision to purchase old-school Montreal Expos t-shirts to wear during warmups, a maneuver that received universal approval from the local fans. Call it pandering or call it genius; either way, it seemed to really impact the atmosphere, shifting the energy in Toronto’s favor. 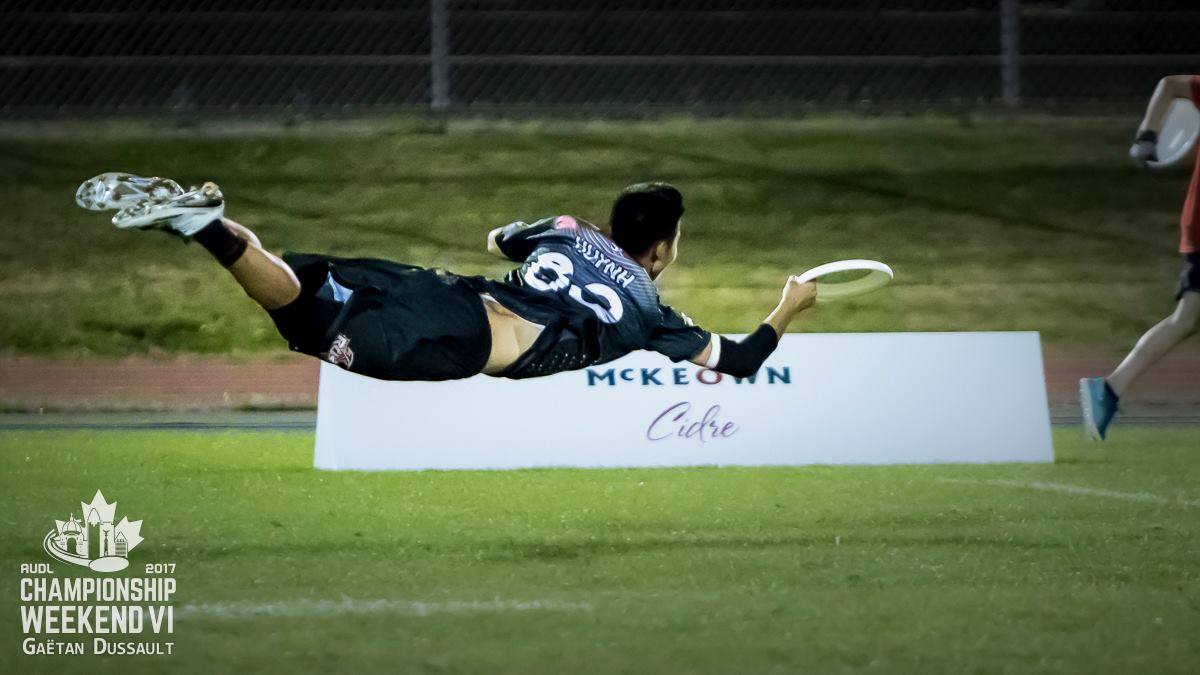 And as the game progressed, that energy mattered. Toronto’s body language and sideline presence was paramount in the team’s surge back into the game, especially in contrast to Dallas’ uncharacteristic frustration. The Roughnecks, unlike the vast majority of their existence, were not simply taking what they wanted from their opponent. On key example of this was when a huck intended for a superstar like Freechild was intercepted by then 18-year-old Bretton Tan. According to Dallas’ script, that was not supposed to happen.

Along with Tan’s breathtaking defense, the Rush were lifted by their next generation of talent. Guys like Ben Burelle, Jason Huynh, Connor Armstrong, Mike Mackenzie, and Darren Wu, none of whom had been on Toronto’s roster that met Dallas the year before, all had moments of game-changing impact over the final three quarters. Whereas the Roughnecks were gradually getting taken out of their balanced focus and relying more and more on their stars trying to be heroes, the Rush were literally coming of age, with the Adrian Yearwood, Jeff Lindquist, Mark Lloyd, Isaiah Masek-Kelly, Thomson McKnight, Cam Harris core meshing and coalescing with the kids as perfectly as anyone could have ever hoped.

The Rush tied it by halftime, then took their first lead in more than 175 minutes of Championship Weekend ultimate, dating back to the 2014 semifinals, late in the third quarter. While the Roughnecks were far from defeated, the upset was brewing and nearing its boiling point. As the riveting final quarter progressed, more and more spectators began to believe, and everyone was transfixed by the drama that barely seemed possible just a couple hours earlier. 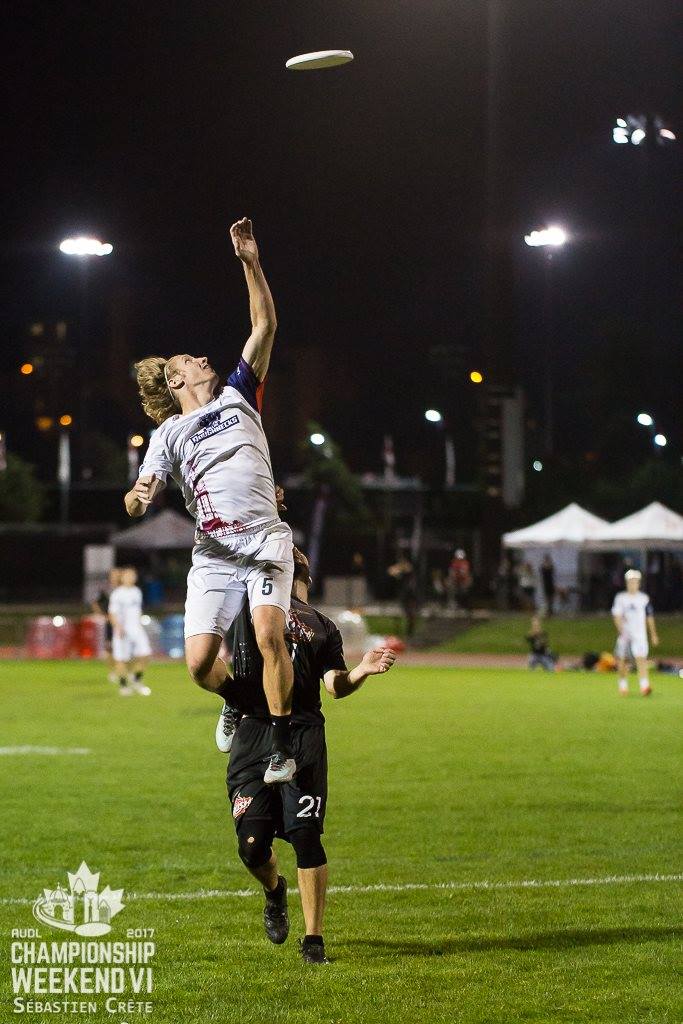 Here’s why I consider this game to be the greatest postseason upset in AUDL playoff history: when the Rush were down 6-2, having been outscored 86-60 since their last Championship Weekend triumph, it was hard to fathom Toronto overcoming that gap. Contrast that with the Seattle stunner from the previous year; people forget that the Cascades were pretty darn confident heading into that semifinal on the Radicals’ home-field. It took them awhile to get going as Madison obviously dominated early to build a sizable seven-goal lead, but Seattle stormed back within two by the end of the third. The Radicals had an army of thousands at Breese Stevens Field providing invaluable emotional energy, but the Cascades were far from a major underdog in between the lines.

The other potential candidate for biggest upset in AUDL postseason history, from my perspective, was the 2018 East Division title game, in which Toronto became the unsuspecting victim against New York after a season in which the Rush had gone 13-1 and the Empire had limped into the playoffs at 8-6. There was also that minor factor of the Rush being 17-0 all-time against the Empire heading into that divisional final, a statistic that still has me scratching my head a couple years later.

All things considered, the Rush’s spectacular victory over the Roughnecks and the Empire’s earth-shattering effort against the Rush are neck-and-neck in the upset department, though I give the edge to Toronto’s triumph mainly because it happened at Championship Weekend. Additionally, the Empire had long had the talent to tame Toronto, and speculation had been building for several seasons that New York could finally prevail in that rivalry. When it finally happened, it was still stunning, but a retrospective roster comparison minimizes the aftershock. Furthermore, the Beau Kittredge factor—convenient to the narrative or actually significant? That can be argued either way—was in New York’s favor and part of Toronto’s demise. And when it comes down to it, Beau Kittredge beating Toronto—an event that has become as routine as the daily sunset—cannot rise to the top spot in the all-time postseason upset conversation.

Regardless, while you can argue about the scale of the shock and the factors that led to it, few would dare to contend that the Toronto-Dallas semifinal does not still register among the five greatest games in the history of the league. Overall, the level of play is brilliant, the highlight-reel moments are endless, and the atmosphere in Montreal is electric. I’ve been eagerly waiting this game’s re-emergence on national television, and thankfully, that day is today.

The 2017 AUDL Semifinal between Toronto and Dallas premieres on FS2 today (on Wednesday, May 13) at 6:00 PM ET. Also, Toronto’s Mike MacKenzie and Dallas’s Matt Bennett will be LIVE with Lep! on the AUDL’s Instagram at 8:00 PM ET this evening, reminiscing about the unforgettable game among other memories from their careers.