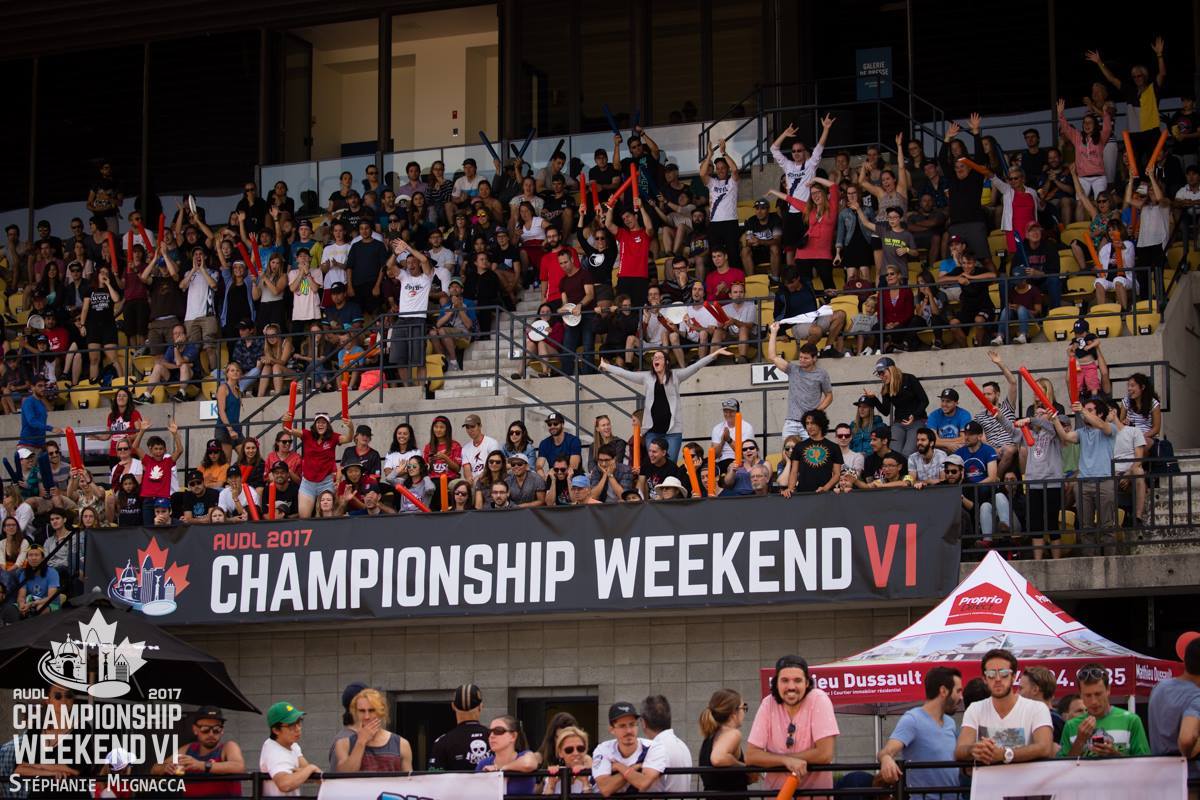 With the 2020 AUDL season on hold, new television partner Fox Sports has chosen to re-air many of the league’s classic games from years past. Next up is the 2017 championship battle between the Toronto Rush and the San Francisco FlameThrowers. Here’s what I most remember about the build-up and aftermath from that particular title showdown.

Entering the weekend, many felt that a Dallas-San Francisco final was inevitable. The Dallas Roughnecks were the defending champs, while the San Francisco FlameThrowers were the Bay Area juggernaut who had several players going for their second and third titles, not to mention the great Beau Kittredge, who was healthy and seeking his fourth AUDL championship in as many years. Meanwhile, the Toronto Rush had been dispatched fairly routinely in the semis in each of the previous two Championship Weekends, and the Madison Radicals had fallen short against a Beau-led, Bay Area powerhouse at the last three final fours. Therefore, the easy logic suggested that history would repeat itself in the semis, with Toronto and Madison humbly accepting their lovely parting gifts and exiting the competition prior to Sunday’s main event. 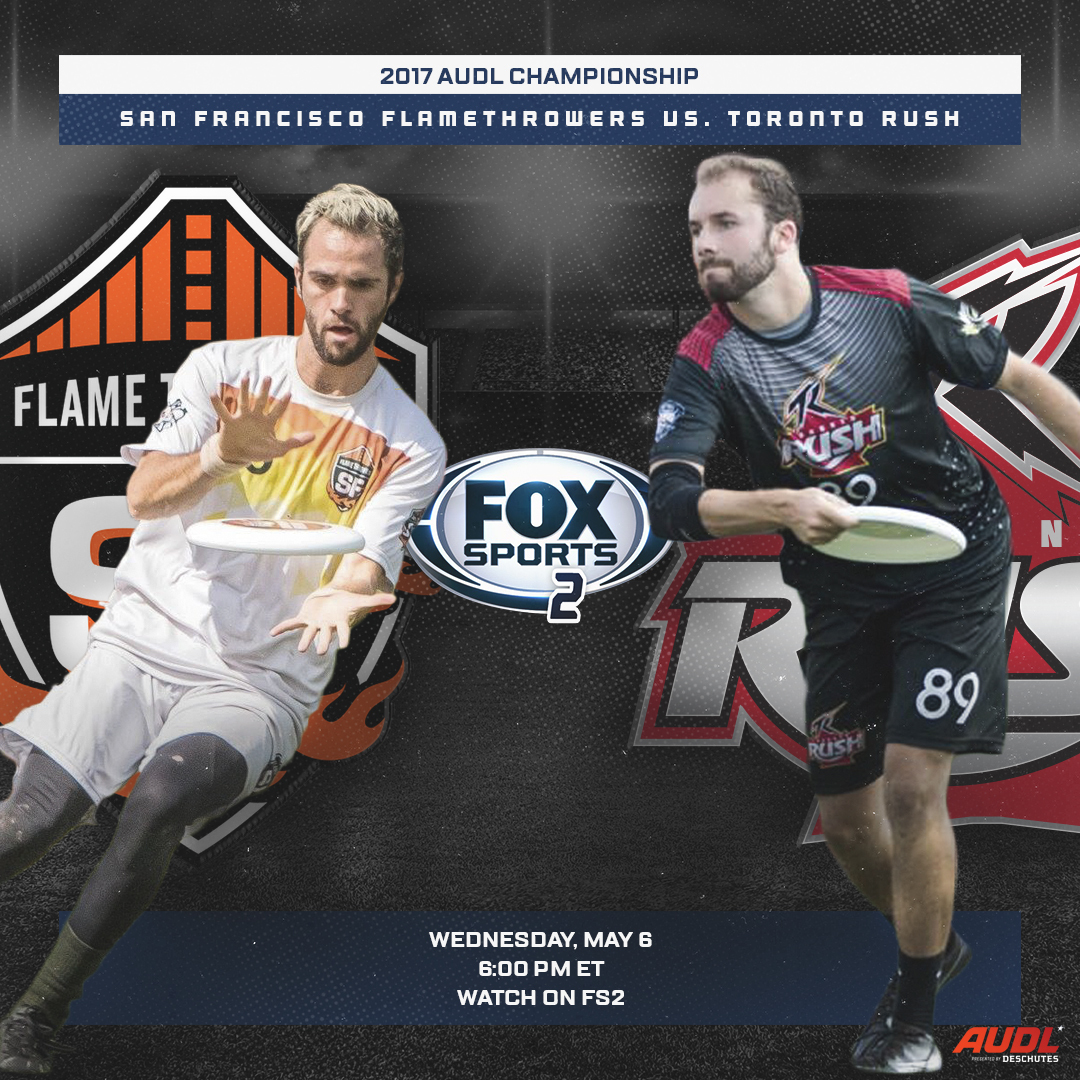 And midway through the first quarter in Saturday’s doubleheader nightcap, with the FlameThrowers already victorious and the Roughnecks confidently ahead 6-2, we were right on track, with biases confirmed and a classic title game beckoning.

In a way, that’s why sports are so great, with twists and turns that even the wisest observer could never fully forecast. Yes, that is why we play the games.

Indeed, we received the magical championship Sunday that we clamored for, only Toronto crashed the party, rallying past Dallas in a stunning Saturday night upset that reset our deep respect for the Rush. And in the 2017 AUDL Championship Game, that Toronto squad gave San Francisco a thrilling and spectacular battle, trading barbs athletically, intellectually, and emotionally for 48 masterful minutes.

Though Montreal was considered to be a neutral location for Championship Weekend, the local fans quickly embraced their rivals from Toronto when the Rush players took the field wearing vintage Expos gear during Saturday’s warm-ups. That crafty gesture immediately won the crowd over, creating a symbiotic relationship that contributed to molding one of the great ultimate atmospheres the AUDL has ever enjoyed. 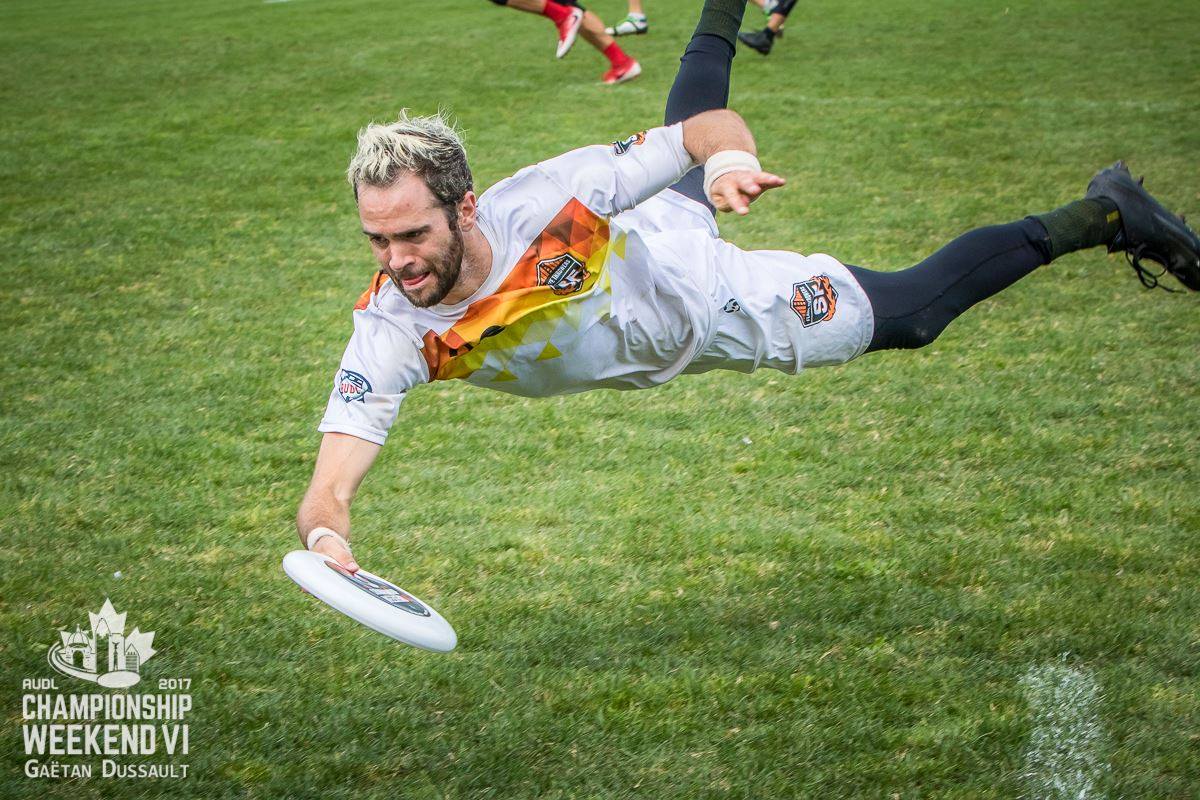 Obviously, the crowd was not the main reason Toronto exceeded expectations in that unforgettable Final Four, however the Rush’s inspired performance was certainly bolstered by the barrage of uplifting energy throughout Claude-Robillard Stadium, a fervor than genuinely transformed the experience. As momentum grew, the level of play on the field increased, and by the end of the weekend, we were collectively awed by the drama, passion, intensity, and all-around performance under pressure, as we witnessed the closest title game in league history, a fact that remains true today.

As for the 2017 San Francisco FlameThrowers, I have already made my case for their lofty place in the pantheon among the best AUDL teams ever. In my contemplative thought exercise last month, the FlameThrowers were seeded as the fourth-best team in AUDL history as they entered the hypothetical Greatest Teams of All-Time Tournament. Then, after an enlightening conversation with Kittredge where we compared and contrasted San Francisco with its other elite peers, I determined that the FlameThrowers, bolstered by late-season performances from super-duper stars like Ashlin Joye, Grant Lindsley, and Mac Taylor, were worthy of being considered as a transcendent squad in the eight year history of professional ultimate.

As for the wildly entertaining four quarters of championship action, Toronto and San Francisco put on a show for 60 points. Though the FlameThrowers drew first blood with a quick break in less than 40 seconds, the script followed similar tones to Saturday’s shocker, with the Rush giving their opponent an early cushion before roaring back. Toronto staples like Mark Lloyd, Cam Harris, Adrian Yearwood, and Jeff Lindquist were anchors, while Andrew Carroll continued his ascent into the realm of special playmakers who could carry their teams. Furthermore, the Rush’s youth movement matured before our eyes, with up-and-comers like Ben Burelle, Mike Mackenzie, Bretton Tan, Jason Huynh, Connor Armstrong, and Darren Wu all having their own memorable moments in keeping the Rush in the running. 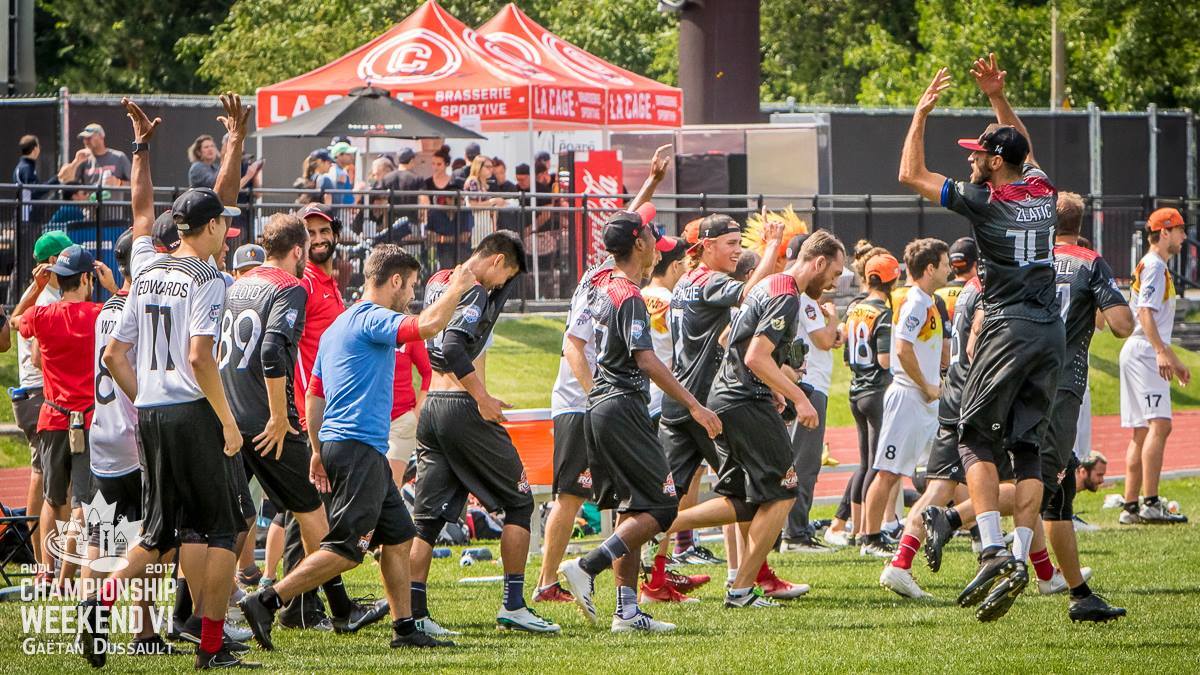 It spoke to Toronto’s overwhelming brilliance that the Rush’s eyebrow-raising impressiveness nearly overshadowed the FlameThrowers casual excellence, a brand of greatness that can spoil you but should never be taken for granted. San Francisco’s roster ebbed and flowed throughout the season, with a bunch of top players available inconsistently. But when it mattered most, world class contributors like the aforementioned Joye, Lindsley, and Taylor, along with Joel Schlachet, Eli Kerns, Sam Kanner, and others carried the FlameThrowers in the winning moments. Meanwhile, Kittredge led the team at +8 (six goals, two assists, and no turns in 44 throws), a performance that should not be overlooked in his reign that can feel a bit like ‘ho-hum, another championship, whatever.’ As anyone who has ever won a single title knows, an immense amount of work, training, and dedication goes into any meaningful pursuit, and Kittredge’s legacy—now at five AUDL championships—should absolutely reflect the effort and excellence that he’s sustained throughout the past decade. It’s also worth mentioning the leadership of Lucas Dallmann, who was referred to by San Francisco’s ownership as the team’s MVP, considering he had been critical in creating the infrastructure for success over several seasons.

Overall, the AUDL’s 2017 Championship Weekend remains one of the epic showcases of ultimate the league has ever produced. The location provided a marvelous backdrop, and the circumstances conspired to generate a magnificent spectacle that I still remember vividly, with so many breathtaking sequences throughout the weekend accompanying the already compelling narratives that came to fruition. 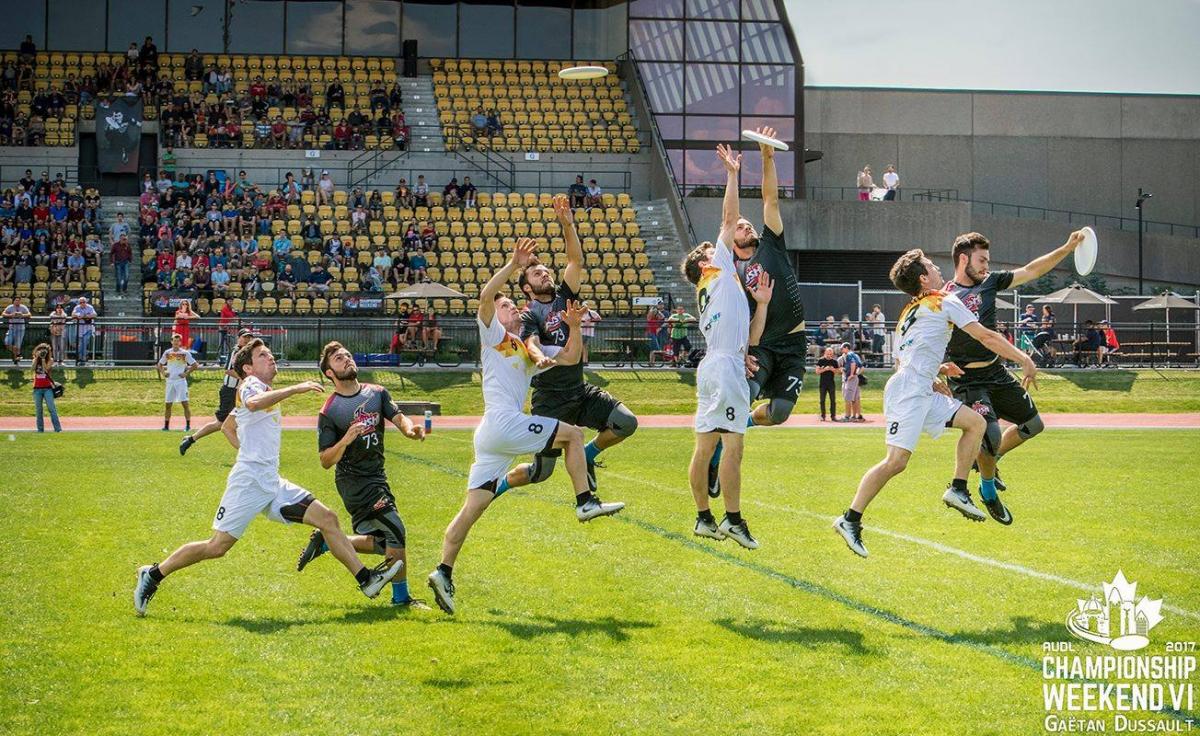 Certainly, everyone associated with ultimate would prefer to be contemplating the race for the 2020 crown. This coming Saturday, in fact, would have featured the interdivisional rematch between New York and Raleigh, a showdown that yielded a double overtime classic in 2019. However, the extra time we’re enduring does provide a chance to further reflect on our past, and the ’17 title game with the Rush and the FlameThrowers was just about as good as it gets.

And if many are stuck at home, there are far worse options than being by the tv as this game makes its national television debut later today. Whether folks are enjoying its drama again or experiencing it for the very first time, we live in a world where professional ultimate frisbee is on tv on a weekly basis.

Like a Rush-FlameThrowers final, this blessing was never inevitable, but it is here. Cherish it.

The 2017 AUDL Championship Game premieres on FS2 today (on Wednesday, May 6) at 6:00 PM/ET. In addition, following the Toronto-San Francisco game, fans can watch an encore performance of the 2018 AUDL Championship game between the Madison Radicals and the Dallas Roughnecks starting at 8:30 PM ET. Also, Toronto’s Mark Lloyd and San Francisco’s Grant Lindsley will be LIVE with Lep! on the AUDL’s Instagram at 8:00 PM/ET this evening, reminiscing about the Rush-FlameThrowers title game among other memories from their internationally renowned careers.