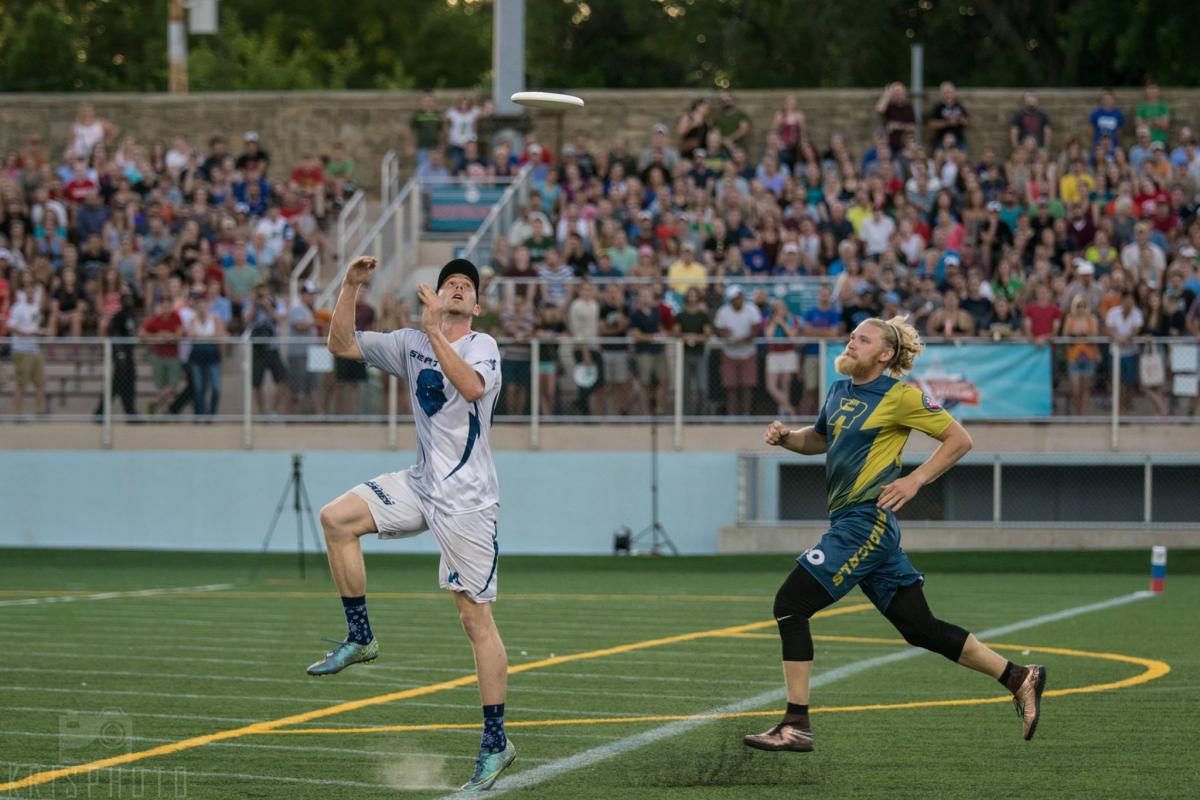 With the 2020 AUDL season on hold, new television partner Fox Sports has chosen to re-air many of the league’s classic games from years past. Next up is the thrilling 2016 semifinal between the Seattle Cascades and Madison Radicals, a game widely regarded among the greatest in AUDL history.

For today’s AUDL Retro preview, I offer several excerpts from my August 9, 2016 Tuesday Toss, which aimed to capture the awe and emotion emanating from the Cascades-Radicals epic, a game so riveting that it somehow overshadowed the coronation of arguably the greatest ultimate team ever assembled. 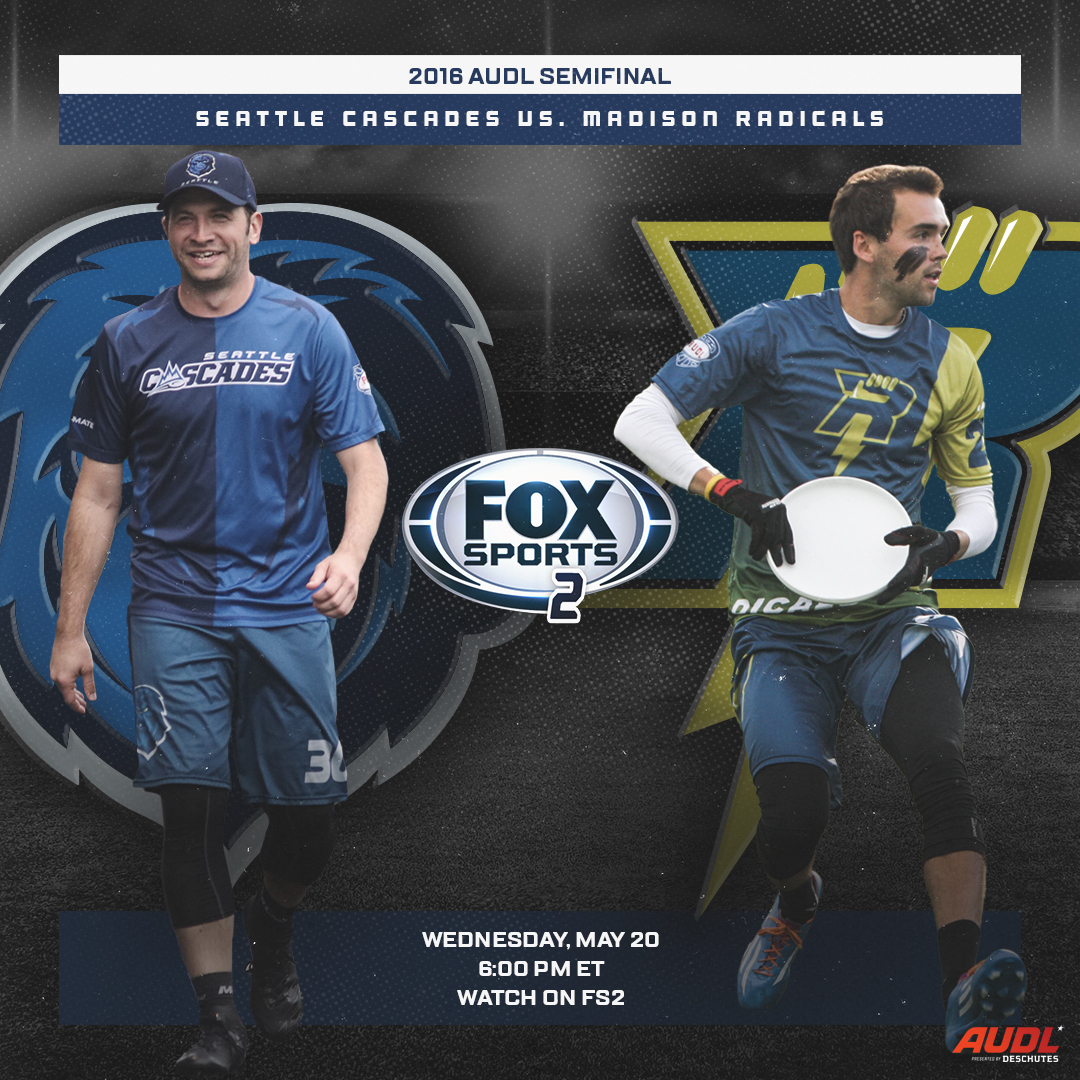 Here’s how the Toss began:

In a world where instant gratification is demanded and attention spans are short, hyperbole can be troublesome. Even in this written cave of ultimate conversation—The Tuesday Toss is meant to be a safe place to talk about these things—it is risky to offer bold, declarative proclamations that elevate our sport to lofty heights previously unforeseen. Hype, no matter how cathartic it may feel, should never supplant truth.

When you witness a scene like what we saw on Saturday night, though, it leaves you lunging toward the pursuit of context. What just happened? Have we seen it before? Will we see it again? Is Donnie Clark even human?

It is not easy to answer any of these questions definitively, but traveling on this ultimate journey compels us to dive into this search for understanding. Whereas the sport is undeniably rising, it is a time of turbulence and soul-searching, with a foggy frontier that is obscured and mysterious. But we can hope that the AUDL’s 2016 Championship Weekend will be looked back upon as a pivotal step towards our sunnier future, when ultimate is seen by the masses the way our most passionate fans look at it now.

As someone who has seen championship ultimate played at all different levels around the world over the past few years, I can say this: this past weekend felt like a phenomenon. It was a chill-inducing, awe-inspiring symphony of effort, passion, heartbreak, and victory. It featured countless unforgettable moments and one unstoppable team. It offered greatness, both on and off the field. Between Madison’s crowd, Seattle’s comeback, and Dallas’s dominance, these were the three pillars of prominence, all of which will linger as the weekend fades into our ocean of memories.

It seems an unlikely confluence of events, but perhaps we were that lucky, and the liveliest ultimate atmosphere ever coincided with the most thrilling comeback ever, all unfolding adjacent to the superior performance of the best team ever.

Honestly words could not do justice to the experience of witnessing that Seattle-Madison game. I watched it again recently, and it’s easy to forget just how many breathtaking turning points there were. For each of the truly astonishing sequences—the Will Chen throw and Donnie Clark’s D, most notably—there were a dozen other moments that shifted momentum and made us gasp. Both teams had so many individuals rise up to make crazy plays in such massive moments, all in front of the loudest, liveliest, and connected crowd the AUDL had ever seen. It was something that I, just like all the competitors and fans who were there, will absolutely never forget. 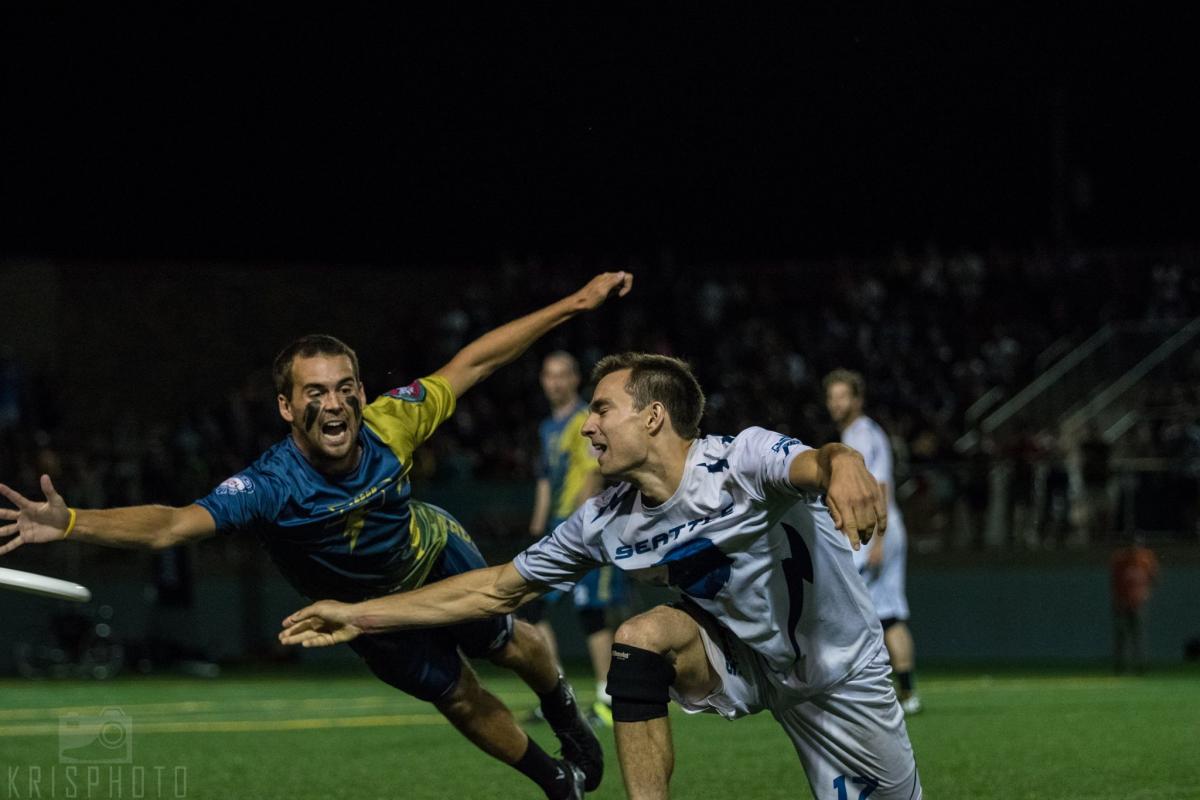 Here’s how the Tuesday Toss proceeded in summarizing the evening:

Last week, as Madison Radicals staffers tried to keep up with the online ticket requests, they began to realize what was brewing. By Friday night, they had easily cleared 2,000 pre-sold passes for the weekend, and it was tough to know exactly what Saturday would be like a Breese Stevens Field.

The weather was perfect, the stage was set, and the fans arrived in droves. There was a decent ambiance during Dallas-Toronto, but there’s no doubt it felt like an undercard, with energy building toward the main event. As the sun set, the crowd rose, and when Colin Camp scored 28 seconds into the second semifinal, there was a rare and powerful roar.

Fans were packed in the stands and stuffed into the beer garden perfectly situated just beyond the end zone. They overflowed into the corners and onto the sidelines in front of the VIP Pizza Bus. There were a handful of Seattle fans, some were simply ultimate fans, and the vast majority were rabid Radicals fans, giving the proceedings a partisan atmosphere that ultimate really has not seen.

Madison fueled the fans’ fire by scoring four of the game’s first five goals, and as the evening grew later, the crowd continued its gradual crescendo. The Radicals’ performance ebbed and flowed, but the accompanying energy supplied by the spectators refused to wane until the clock struck zero.

When it did, most fans entered a surreal state of shock. The Radicals had not trailed the entire game until Duncan Linn’s go-ahead goal with 36 seconds left. And when Madison was receiving the pull down by one with the entire season on the line, the atmosphere reached its zenith, as fans looked to inspire another dramatic effort.

As much as Madison’s roster cherished its chance to compete in front of the Radicals’ loyal fan base, the visiting team refused to be intimidated by its rowdy surroundings. When the Cascades were behind by seven scores with less than 18 minutes of game time remaining, they could have disintegrated down the stretch in the hostile environment. But they stayed together, kept grinding, and put together some of the most stunning sequences of ultimate any of us had ever seen.

There were several signature moments during Seattle’s epic 13-5 rally, and a couple of them immediately became iconic as we realized what had just happened. Regardless of what happens over the next decade or two, Will Chen’s throw and Donnie Clark’s block will go down in history as two of the greatest efforts in the history of the AUDL.

In the closing seconds of the third quarter, Madison was on the verge of a four-goal lead. The Radicals patiently moved the disc in the red-zone, as the Cascades tightened up their goal-line D. With around 10 seconds left, Husayn Carnegie displayed impeccable instinct, deflecting Andrew Brown’s cross-field throw into a turnover. It was a missed opportunity for Madison, but at least they would take a three-goal edge into the fourth. Right?

Chen had other ideas, as the veteran handler collected the disc, pivoted, and launched a majestic backhand huck that narrowly squeezed past multiple marks as it found its airspace. As the clock expired, the 175 grams of plastic kept floating and floating, defying gravity as it crossed midfield, remaining stable as it soared into the other red zone. To the disbelief of everyone, it rotated all the way to the end zone, as Seattle’s Matt Russell milked the final yards to secure the unbelievable score on an 80-yard, buzzer beating backhand bomb. It was unreal and absurd. Instead of being up by four, or even three, the Radicals only led by two, and Seattle would receive the disc to begin the fourth.

Madison’s D-line broke the Cascades to start the final quarter, but the wave of Seattle momentum was not obstructed much. With 3:11 remaining, Mark Burton hit Simon Montague to tie the score at 24, the game’s first tie since it was 1-all, 56 seconds into the game. Both offenses held once over the next 71 seconds, and it was 25-all as the Radicals received with two minutes left.

Madison worked it across midfield, but the offense that had been crisp and collected for much of the night had often grown stagnant down the stretch. And with just over a minute to play, Brian Hart held the disc for a nanosecond too long, resulting in a season-changing stall call. Seattle punched it in for the 26-25 lead, and Madison had 36 seconds to find the equalizer.

The Cascades gifted the Radicals half of the field, with Andrew Meshnick easily gaining a chunk of yards as a result of a blown assignment. And when Meshnick sent a good-looking flick toward the end zone, Thomas Coolidge had several steps on Clark. It looked like it would be a game-tying delivery.

Clark accelerated, as if his turbo button was hit by lightning, closing the gap and propelling himself toward the greatest D of the weekend. He left his feet with purpose and prayer, desperately lunging his momentum toward that spinning plastic.

Just when it looked like Coolidge would get both hands on the disc, Clark’s outstretched fingertip grazed the rim. Clark crashed to the ground as the disc, redirected by the slight, yet monumentally significant touch, angled away from the receiver and flew out the back of the end zone.

Clark was down. Coolidge looked crushed. The Seattle sideline erupted. The Madison fans were stunned beyond belief. The situation gradually sunk in. As it did, it became even harder to believe. Clark had made the play of the season, an incomprehensible clutch layout block that lifted his team into delirium and led thousands of spectators into despair. 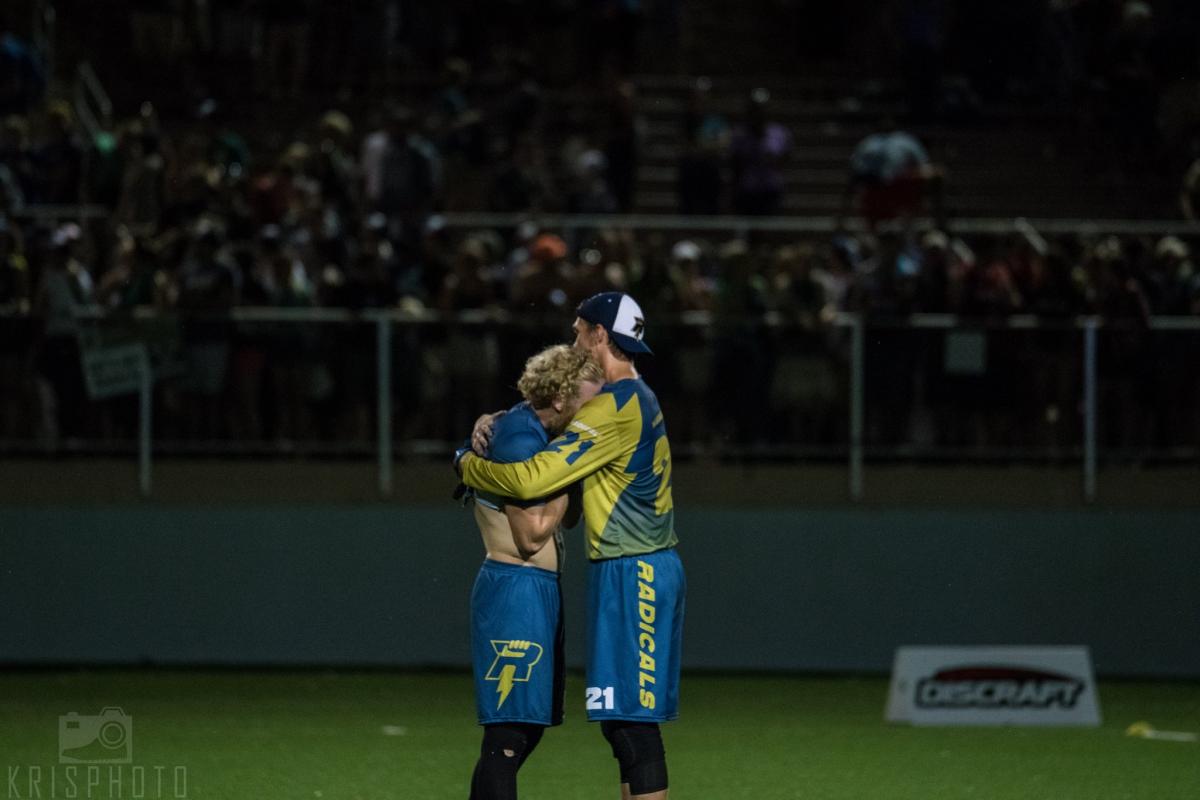 The Radicals had one final chance, but Seattle’s Sam Harkness defended the final huck that was intended for Kevin Pettit-Scantling. As the final seconds disappeared, the Cascades stormed the field euphorically, as the Radicals struggled to grasp this new, painful reality.

The 2016 Seattle-Madison Semifinal premieres on FS2 today (on Wednesday, May 20) at 6:00 PM/ET. In addition, prior to that Cascades-Radicals classic, fans can watch an encore performance of the 2017 AUDL Semifinal game between the Toronto Rush and the Dallas Roughnecks starting at 3:30 PM ET. Also, Matt Rehder, a key member of the Cascades in 2016, will be LIVE with Lep! on the AUDL’s Instagram at 8:00 PM/ET this evening, reminiscing about the comeback among other memories from his unique ultimate career.