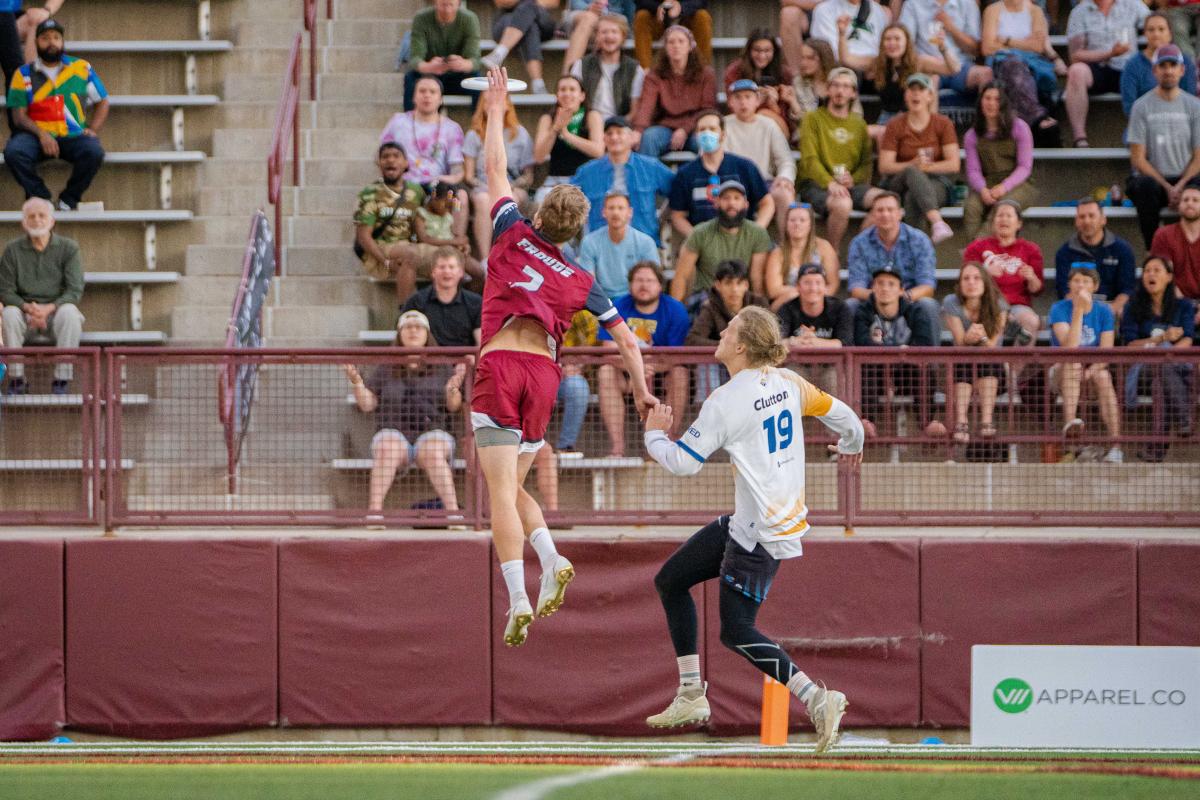 Two expansion teams with double digit wins, the Salt Lake Shred and Colorado Summit have already established themselves as highlight factories in their first season of play. And heading into a much anticipated third matchup this year—Colorado won in both prior meetings—the West Division Championship Game will determine which one is truly the AUDL’s hottest new team. 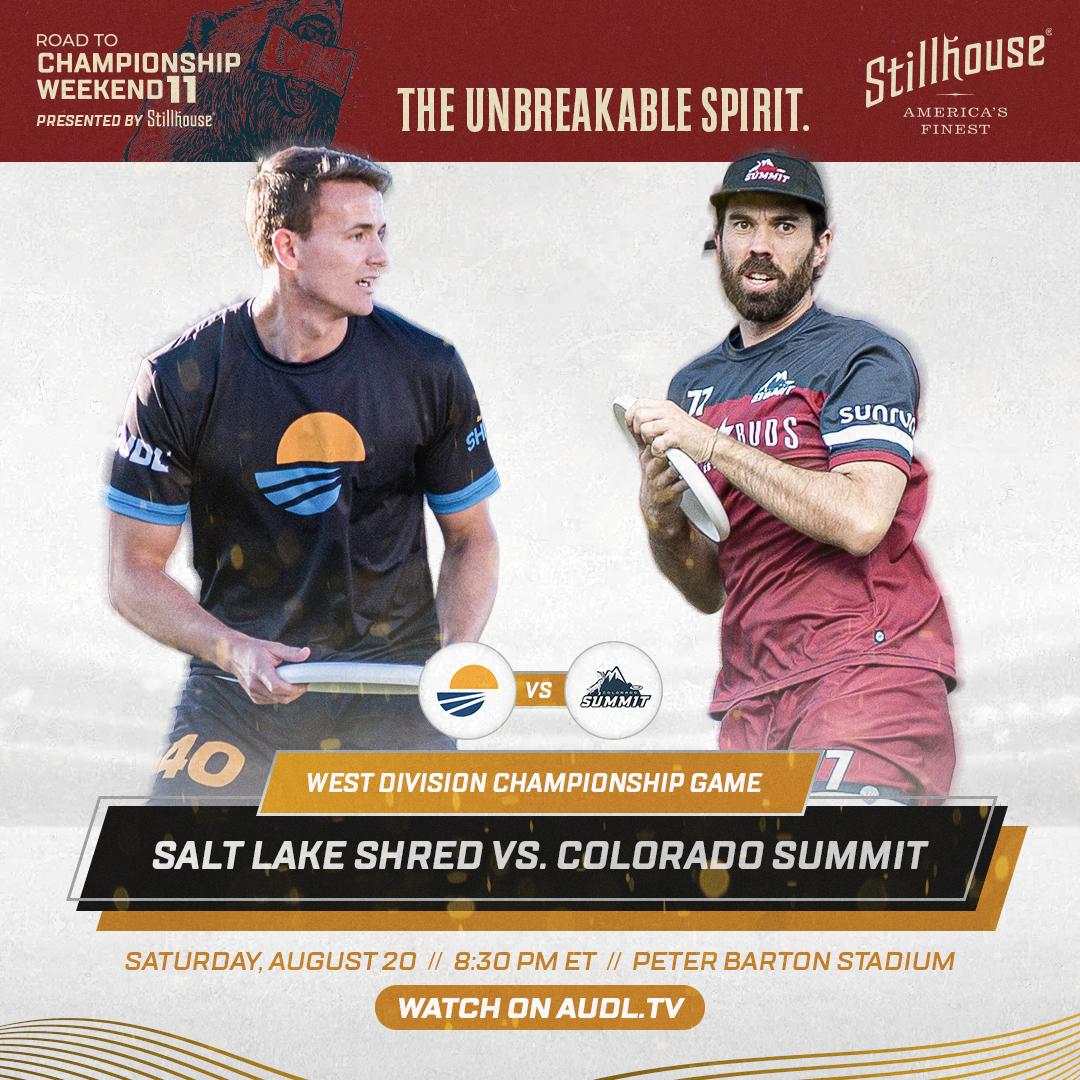 Despite 25 turnovers, the Shred won their opening round playoff matchup last weekend against the two-time reigning divisional champions from San Diego by owning individual matchups on defense. Salt Lake leads the league in takeaways per game (12.9), and in a swirling wind environment at home last Saturday, the Shred’s defensive athleticism was tenacious in the open field and generated 17 blocks; Joel Clutton and Ben Green are two of the top six players in blocks per game this season among players with at least four games played, and eight different Shred players have 10 or more blocks in 2022, the most of any team in the AUDL. And while Salt Lake may lack efficiency in their defensive counterattack, Chad Yorgason and the rest of the Shred D-line excel in fastbreak scenarios, relying on their size and playmaking ability to convert scores; Salt Lake is third in break scores per game, and second in overall scores per game.

“They play fast, they make big plays, and that’s something we always have to be aware of, especially if we want to take advantage of some of our athletes,” said Colorado’s Co-Head Coach Mike Lun in Evan Lepler’s playoff preview. “I feel like they can certainly match or challenge a lot of those one-on-one situations where we’re used to having an advantage on most teams.”

It was the Summit, however, who made defensive plays from the start in the last matchup between these two teams, jumping to a 20-11 lead by the end of the third quarter before winning by a five-goal margin. ​​Cody Spicer matched MVP finalist Jordan Kerr step-for-step in space, Nate Buchholz got two clutch blocks, and the Colorado D-line converted 11-of-15 (73 percent) of their break opportunities while holding the potent Shred offense to their lowest efficiency of the season. 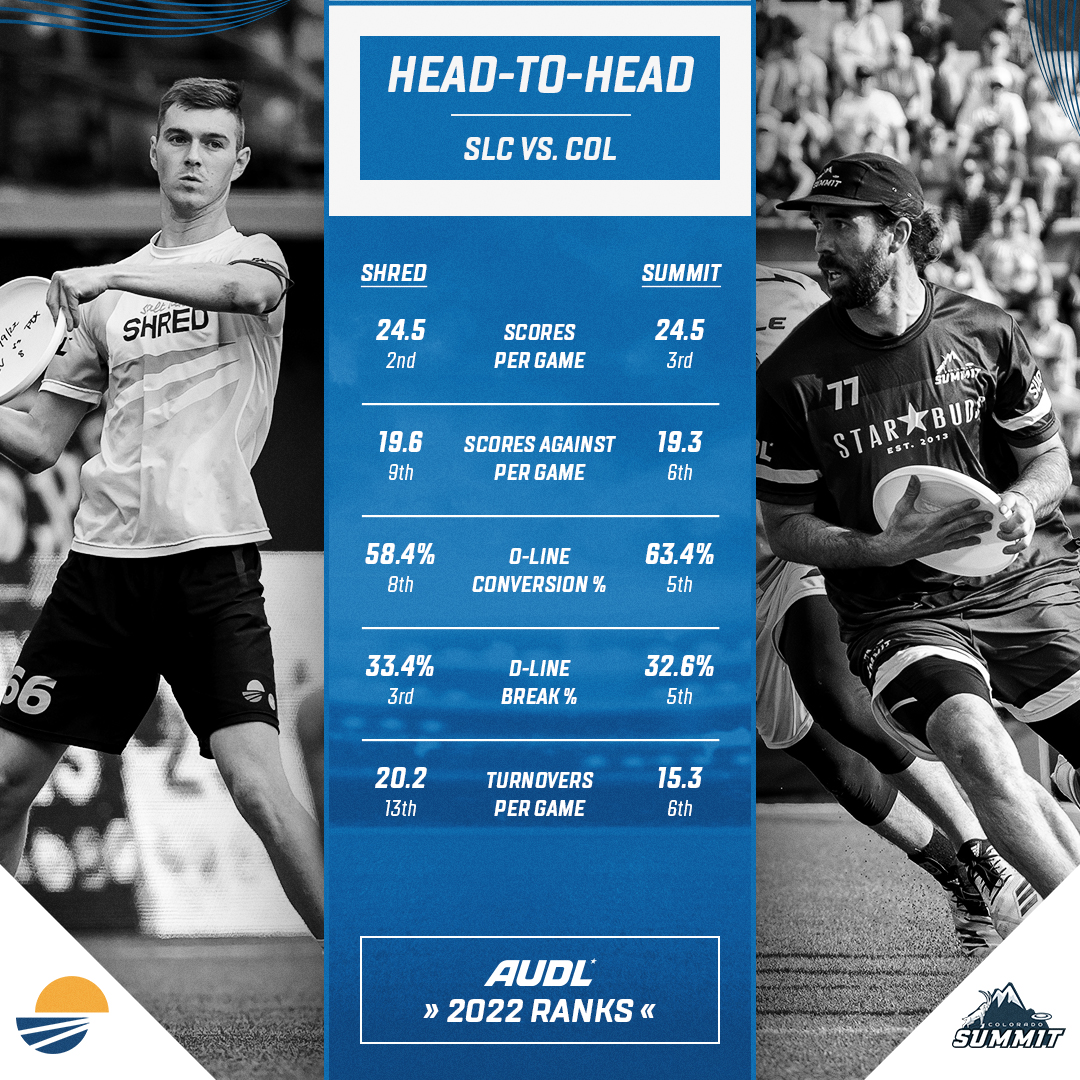 “We just weren’t mentally ready for the possibility that we’d play so poorly in that first quarter,” said Shred Head Coach Bryce Merrill back in June.

“A combination of nerves, bad decisions, and lack of mental toughness,” added Kerr.

Colorado’s veteran stars Jonathan Nethercutt and Jay Froude weren’t without their mistakes, but their confidence and playmaking paced a Summit attack that completed a season-high 17-of-19 (88 percent) of their hucks. Froude is returning from missing two games due to a midseason hamstring injury, and has been a menace in both games against the Shred this season. And unsurprisingly, Nethercutt helms a Summit team that leads the league in huck completions per game (10.2), with the former MVP once again proving to be the best deep thrower in the AUDL, capable of bombarding defenses single-handedly from anywhere on the field.

But for all their big plays and talent, what has made the Summit resemble a championship team in their first year of contention has been their focus on efficiency. After beginning the season with 67 turnovers in their first three games, Colorado averaged just under 13 per game over their last nine matchups, including a season-low eight turnovers in their regular season finale against Portland. Rookie Quinn Finer has been the most efficient offensive scorer in the league outside of MVP favorite Ryan Osgar, and third-year phenom Danny Landesman has come into his own as a distributor in recent weeks, inheriting Froude’s workload in his absence and excelling alongside Nethercutt and Matt Jackson in the Summit handler unit.

The trick for the Shred will be balancing their desire to make high-impact plays against a Colorado team that is honing its system week by week.

“We’re not gonna try and change that at this point and pretend like we’re a team that only throws eight turnovers a game,” said Shred Coach Merrill. “We don’t have the corps of veteran handlers like these other playoff teams have. And we’re young. So instead of trying to shake that reputation, we’ve leaned into it and embraced it, and we’re gonna ride the wave the rest of the playoffs.”

Kerr once again embodied that high-octane energy last Saturday against the Growlers, punching in five assists on just 19 total completions. The signature moment of the night came at the beginning of the third quarter when Luke Yorgason uncorked a 70-yard throw that was tossed and swirled by the wind, with Kerr and a pack of Growlers defenders becoming untangled underneath the disc. In the chaos—and having recovered from a fall just moments before—Kerr saved possession with a layout through contact, and broke his nose on the final landing. Kerr left the game, the Shred converted the score, and Kerr would return minutes later, throwing the assist on his first point back on the field.

“We should be fine for the Colorado game,” Kerr said earlier this week.

The Shred took a lead into the third quarter the first time they played in Denver before the Summit’s defensive playmaking clinched the comeback. Salt Lake has earned most of their 11 wins this season because of their strong starts in the first quarter, and they will need another one on the road tomorrow night to get their first victory against a favored Colorado team.

“They’re such a dynamic offense,” said Merrill of Colorado. “So we can’t overplay any one aspect of their attack.”

But even against good strategizing, Colorado possesses a lineup of AUDL veterans with Championship Weekend experience. And with a potential sellout crowd at home, it might feel like the Summit have more than seven players on the field.