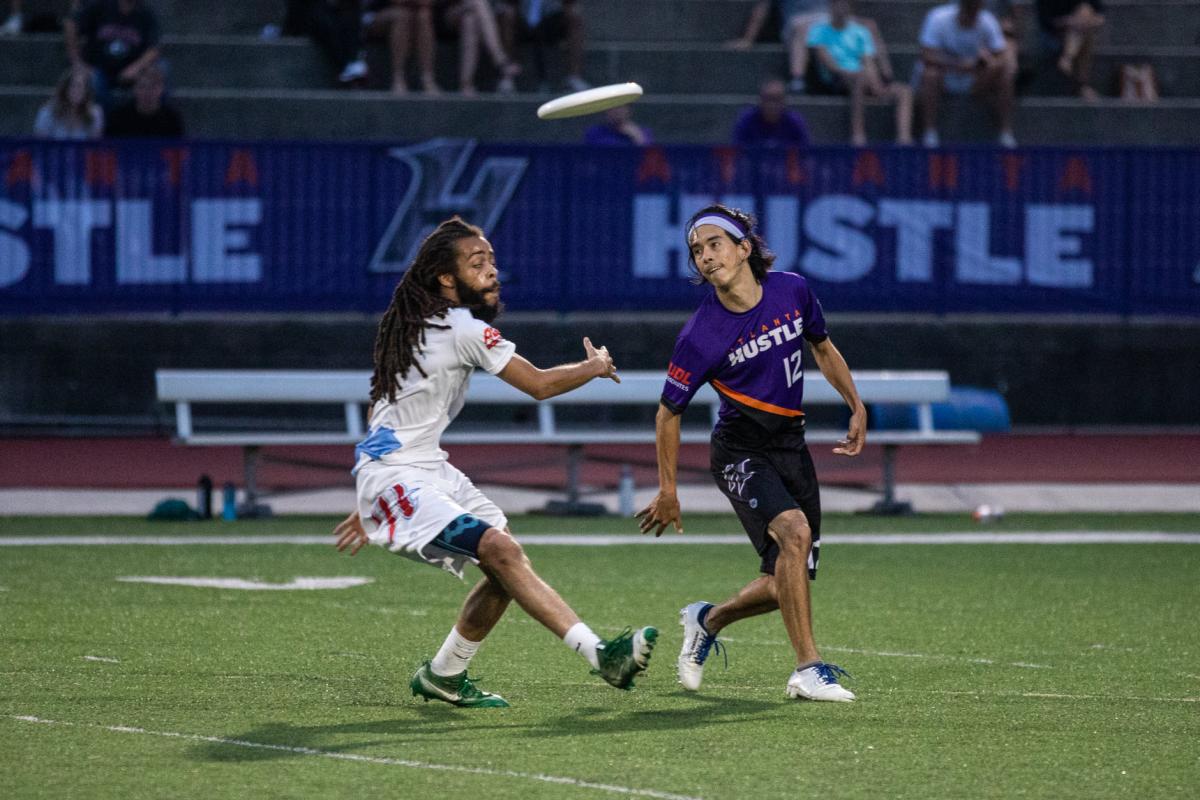 Watch the Week 1 "The Friday Feature" on watch.AUDL.tv for FREE. Also available on YouTube.

A Week 1 rematch from a year ago, the Atlanta Hustle will take on the defending champion Carolina Flyers in the first game of the 2022 season tonight at 7:00 PM/ET. If last year’s matchups are any indication, the two 2021 playoff teams with Championship Weekend aspirations are sure to put on a show in the opening game of the year. 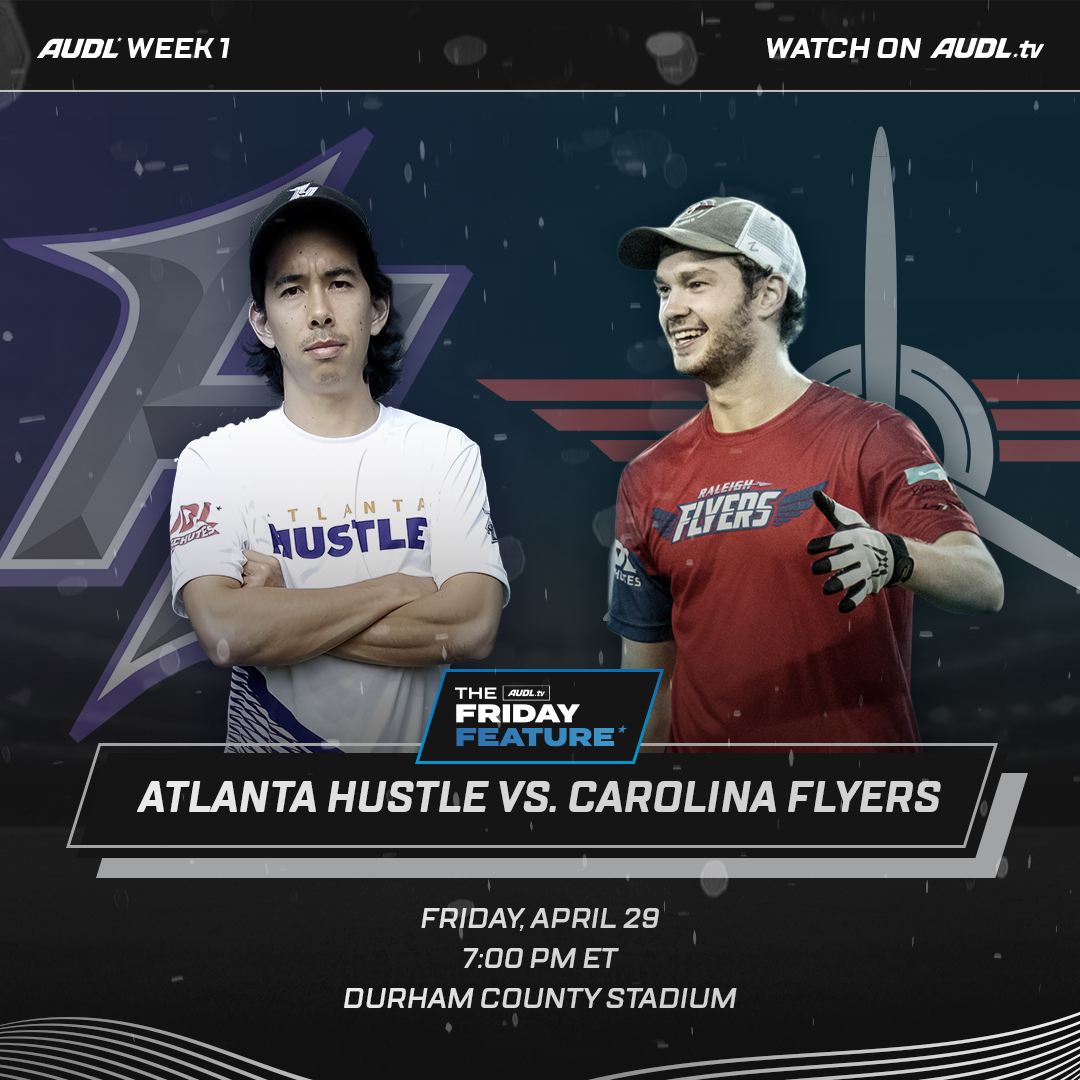 In their first meeting in Week 1 of last season, Atlanta limited Carolina to just four first-half goals and held off a Flyers comeback to eventually close out the 19-18 overtime win. In Week 11, Atlanta again came out firing out of the gates and held a 16-11 lead halfway through the third quarter. But Carolina clawed their way back, holding Atlanta to a single goal in the fourth quarter en route to a 20-18 comeback win. Both teams would eventually make the playoffs, though their paths diverged from there; the Hustle would suffer a back-breaking loss to the New York Empire on an overtime buzzer beater, while the Flyers would go on to defeat New York in the 2021 AUDL Championship Game.

Overall, both teams have had positive a offseason. Carolina comes into the year having retained virtually the same championship roster, plus a handful of rookies sure to make a name for themselves this season. They’ve also picked up a couple nice depth pieces from other teams, with defender Charlie McCutcheon coming over from Minnesota and former Hustle handler Player Pierce making the move north. Atlanta, on the other hand, lost their top cutter from a season ago in Antoine Davis but immediately responded by signing a trio of free agents in Bobby Ley, Bradley Seuntjens, and Khalif El-Salaam. Ley is inactive tonight, but Seuntjens and El-Salaam will make their Hustle debuts in what will be the first of three regular season battles with Carolina this season.

On the defensive side, the Hustle will be missing four major pieces in John Stubbs, Brett Hulsmeyer, Michael Fairley, and Jakeem Polk (season-ending injury). Without Hulsmeyer to generate turnovers and Stubbs to lead the counterattack, the Hustle may need to lean on El-Salaam to take on any and all roles for this D-line, which has the tall task of trying to contain a group that converted 77.2 percent of their O-points last season, best in the league.

While the Flyers offense will be without 2021 All-AUDL Second Team selection Allan Laviolette this season, there’s little reason to think their efficiency won’t remain near the top of the league. Their O-line conversion percentage has ranked top six in the league each of the past four seasons, and Carolina is one of the few teams that have the depth to plug a Laviolette-sized hole in the offense. While he played mostly D-line in the playoffs, Eric Taylor is an obvious choice to slot in as Carolina’s A1 striker, a position in which he opened the 2021 season before suffering an injury in his fourth game. In the three full games he played to start the year, Taylor completed 102-of-106 throws (96.2 percent) with 16 assists and three goals. A possible O-line that features Taylor working alongside Jacob Fairfax, Henry Fisher, Terrence Mitchell, and reigning Rookie of the Year Anders Juengst while Sol Yanuck and Matt Gouchoe-Hanas distribute the disc feels like a fantasy-drafted super team.

The Taylor on the other side, 2021 MVP finalist Austin Taylor, will look to build on his best season as a pro. Atlanta’s gunslinging quarterback led the league in completed hucks (throws of 40-plus yards) with 31, while finishing third in assists and fourth in throwing yards. Even with the loss of Antoine Davis, Taylor will have plenty of suitable deep targets on a line that features the number two all-time goal scorer in Matt Smith, a guy that’s scored 40-plus goals each of the last two seasons in Eli Jaime, and the ascending Karl “Endzone” Ekwurtzel, who scored 22 goals in seven games after switching to O-line at the halfway point of last season. Also watch for Khalif flipping over to offense from time to time; before being anchored to the D-line in San Diego, he averaged 5.1 scores per game in two seasons with Seattle playing a 60/40 split of D and O-points. 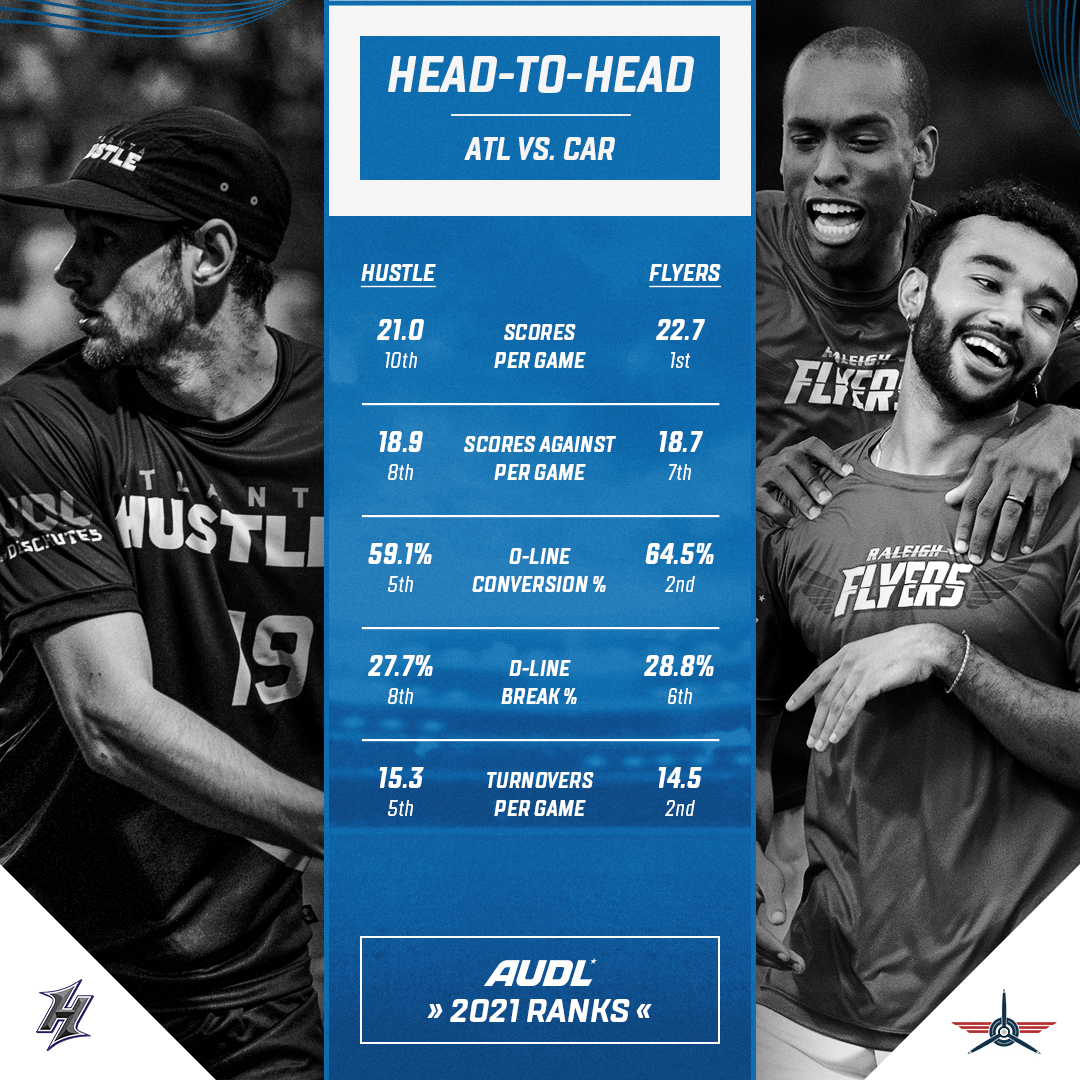 With no Bobby Ley or John Stubbs to balance the backfield, Taylor will have his work cut out for him and may run into similar issues as the last time these two teams met, with the Flyers’ swarming handler defense able to consistently key in on Atlanta’s only consistent backfield option. Carolina comes in with the bulk of their defensive starters from a season ago; if they’re able to keep Taylor out of rhythm, Atlanta will have to rely on their less-than-full-strength defense to trade punches with the defending champs.