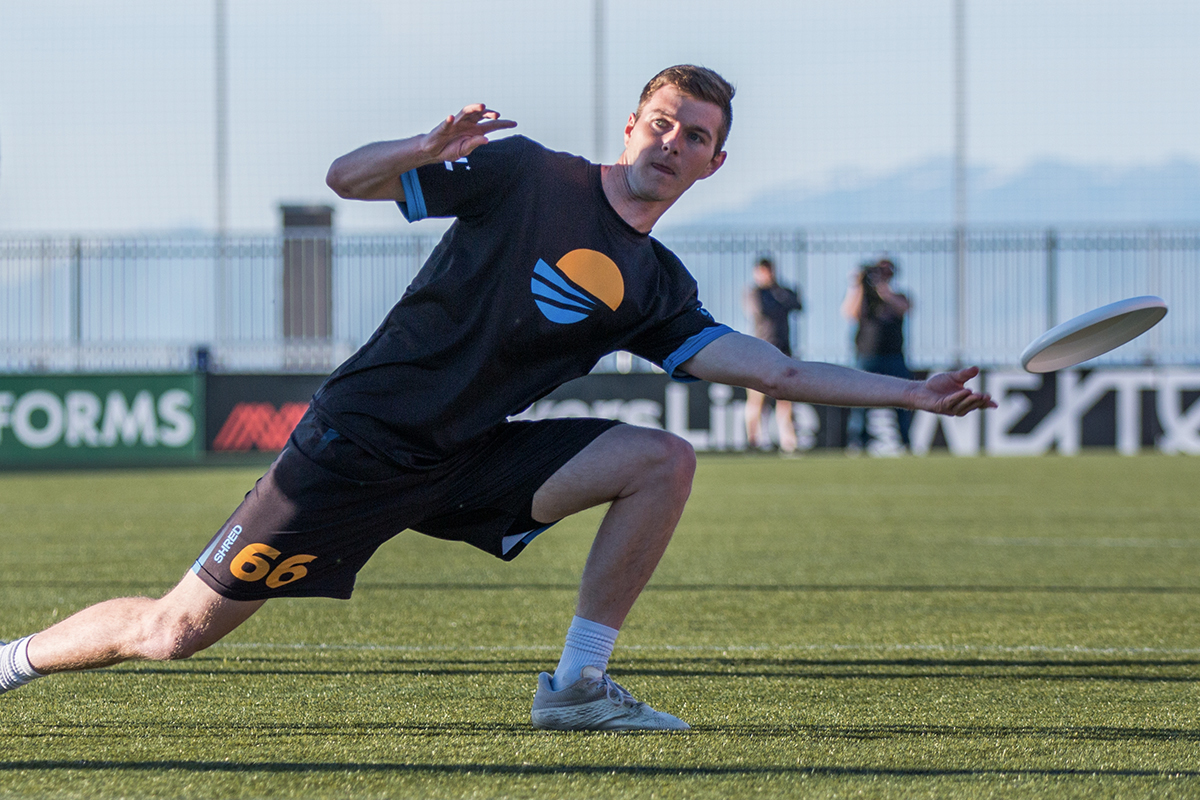 Watch "The Friday Feature" tonight at 9:00 PM/ET on watch.AUDL.tv

The Salt Lake Shred put the league on notice in Week 1, traveling to SoCal on opening day and upsetting the reigning West Division champs on their home turf. Having won every game since then, the 5-1 San Diego Growlers will have a chance at revenge tonight, as they rematch the Shred in Salt Lake.

While their record places them as the current two seed in the division, the Growlers haven’t won nearly as convincingly as Salt Lake has over the rest of the division. San Diego has a +10 point differential, lowest among any team with five or more wins—all but one of their wins have come by one or two goals. Salt Lake, on the other hand, has put together a couple dominant performances at home, blowing out Seattle and Oakland by an average of 10 goals per game before falling to the Summit two weeks ago. Their +19 season point differential is tied for sixth highest in the league.

On the offensive side, the Shred’s firepower has come mostly from the play of their midseason MVP, second-year striker Jordan Kerr. Kerr is averaging 9.3 scores per game, more than anyone else in the league; he’s on pace to finish with over 80 assists and 30 goals. His MVP campaign began in that first game against San Diego, when the Growlers had no answer for a relentless series of outside-in, step-out lefty flick assists down the sideline. Kerr threw nine assists in the game, and would throw six-plus in each game thereafter until Colorado limited him to just three in Week 7. A couple early turnovers and Kerr was out of rhythm from the first quarter onward against the Summit; it’ll be worth watching how the Growlers attempt to limit Kerr, making adjustments from their first game and potentially learning from Colorado’s gameplan.

The Growlers defense will be without a few starting defenders in 2021 AUDL All-Defense Team selection Steven Milardovich, Trevor Purdy, and Stefan Samu. All three have recorded five or more blocks this season, playing a big part in San Diego’s second-leading takeaways per game average (13.0). Chris Mazur, who’s been shifted to D-line and taken on the role of primary puller, is also out this weekend, though the team does return captain Will Turner, who is active for the first time since Week 1.

Mazur’s absence could hurt a struggling Growlers counterattack, a unit that ranks next to last in the league in D-line conversion rate at just 33.3 percent. The Shred have shown stretches of elite offensive efficiency, and with the Growlers missing a few block-getters, the pressure will fall on guys like Michael Tran and Tyler Bacon to lead efficient D-line drives during the small handful of break chances they get—they had just five opportunities in their first meeting with Salt Lake.

For the Growlers offense, the biggest absence is former MVP Jonathan “Goose” Helton, who just had his best game of the season which included dishing the game-winning assist to his offensive counterpart Travis Dunn. Completing 6-of-6 hucks on the night, Helton led the Growlers O-line to their most efficient showing of the season, as the team converted 75 percent of its offensive possessions. In-rhythm hucks were the recipe for success against LA, and the Growlers had similar hucking success in their first meeting with Salt Lake, completing a season-high 10 throws of 40-plus yards. Dunn might get more aggressive with continuation hucks to keep the defense honest, but this Goose-less Growlers offense could fall into a more possession-based approach, especially when the Shred have a Defensive Player of the Year candidate lurking in 6’5” Joel Clutton. Clutton missed the first game of the season, but he’s been a monster in the deep space since then, having totaled nine blocks in five games including three multi-block performances.

Clutton’s playmaking will be needed for a Shred D-line that’ll be without second-year studs Garrett Martin and Ben Green. Martin typically brings a dynamic presence on the counterattack, while Green has a ridiculous eight blocks in two games to start his Shred career. While punchy, the aggressive Shred defense has allowed 22.0 scores per game this season, tied for sixth worst in the league. They’re surrendering the second-most completed hucks per game (10), and they just allowed Colorado to complete 17-of-19 in their last outing. They’ll have to find an answer to Growlers deep threat Sean McDougall, who leads the team in receiving yards per touch (13.9) and totaled nine scores in Week 1. 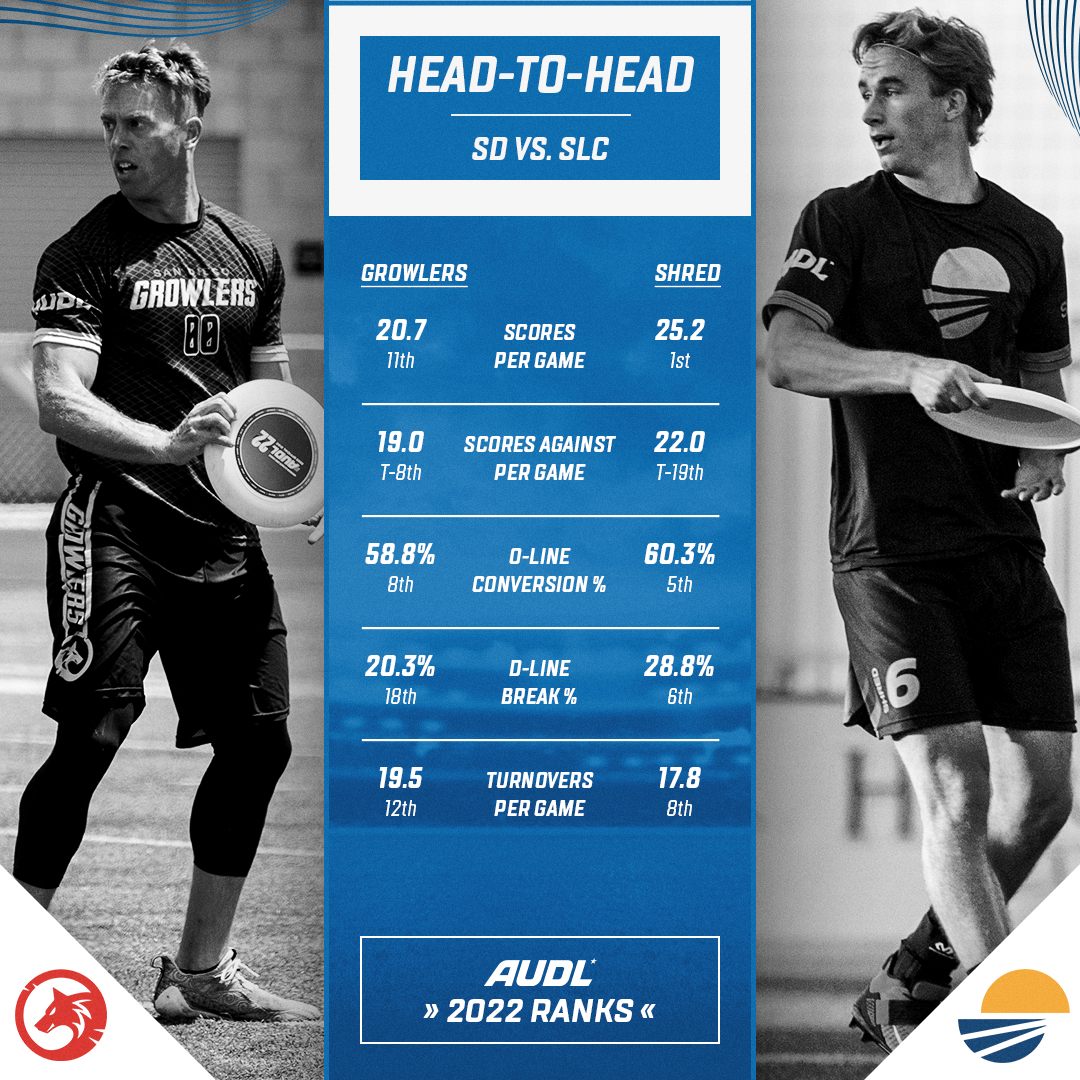 At this point we’ve seen a couple different versions of each team’s offense. For Salt Lake, an in-rhythm Jordan Kerr is obviously critical. For the Growlers, connecting on a handful of deep shots will help them keep pace with, and even stay ahead of their opponent. With the Shred coming off their worst offensive game of the season and the Growlers coming off their best, the spotlight will be on each team’s O-line as the two West Division contenders battle for second place.