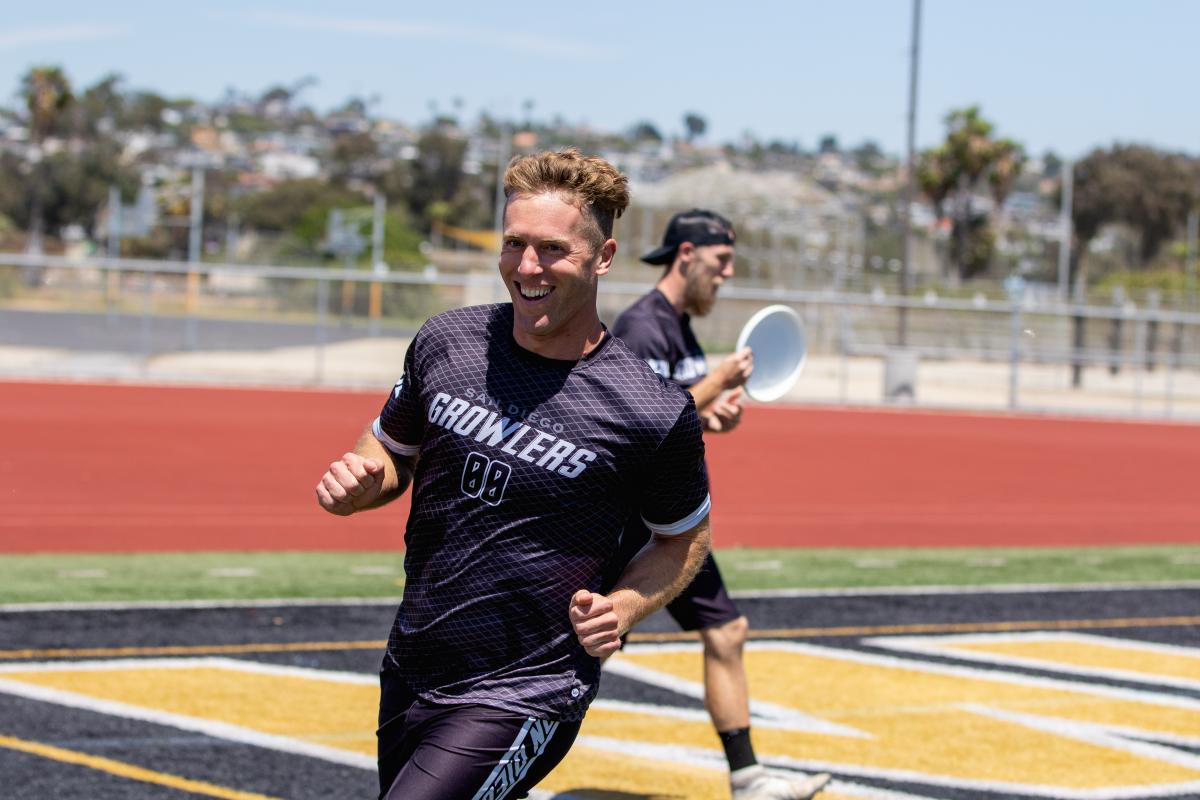 Austin’s Aussie compiled 423 receiving yards against Madison on Saturday night, the most of any AUDL player across all 11 games this past weekend. One day earlier, he also churned for 335 receiving yards, the eighth-most among all competitors across Week 8. Overall, Evans produced eight goals, four assists, one block, and 842 yards during the Sol’s 1-1 trek through the Central Division. The 32-year-old AUDL rookie ranks fifth in the league in receiving yards for the season, trailing just Portland’s Leandro Marx, New York’s Ben Jagt, Toronto’s James Lewis, and New York’s Ryan Osgar.

It’s often tricky to isolate individual excellence on Carolina because of the team’s tremendous balance, but Fisher’s best game of the season stood out on Friday night in Atlanta. The 6’6” cutter caught five goals, threw three more, and produced 522 total yards, the most he’s had in a single game since yardage tracking began. His 364 receiving yards were a game-high, and his 158 throwing yards led all Flyers’ cutters, along with being third-most on the team behind the quarterbacking duo of Sol Yanuck and Matt Gouchoe-Hanas. In fact, Fisher as an aggressive thrower has been much more of a thing this year for Carolina; he already has more throwing yards in six games this season than he had in 11 contests a season ago, and his completion percentage has risen from 94.0 percent in 2021 to 98.9 percent in 2022.

Helton’s heating up, and consequently, the league’s first ever two-time MVP is on the Honor Roll for the second consecutive week. The wily 38-year-old launched the game-winning throw as time expired on Saturday night in Los Angeles, propelling San Diego to its fifth straight win. Helton’s forehand navigated around multiple defenders and curled just inside the front pylon for Travis Dunn to collect at the buzzer, lifting the Growlers over their rivals, 20-19, and capping another splendid all-around performance. That final toss gave him his sixth assist of the game, to go along with two goals, 387 throwing yards, and just one turnover. He also completed all six of his hucks. Paul Lally deserves a shout-out too for his 78-for-78, 388-yard throwing performance in the Growlers’ narrow victory.

The Spiders officially got off the schneid in large part thanks to Lung’s poise with the disc. The 23-year-old handler has produced assists and yards all season long, but also had 19 throwaways in his first four games played. On Friday night, however, Lung went 26-for-26, with five assists, two blocks, and 327 total yards in Oakland’s overtime victory over Seattle. The Spiders were missing Justin Norden and Keenan Laurence, but Lung’s playmaking, along with Matt Crawford’s clutch grabs downfield, enabled the Spiders to earn their first win of the season.

Monroe went 38-for-38, produced a game-high 452 total yards, and contributed to six scores in DC’s 10-goal rout of Toronto. Johnny Malks also finished with a 100 percent completion rate on 37 throws, while David Cranston, Rhys Bergeron, and Jasper Tom combined for 10 blocks, but Monroe’s mistake-free performance was especially notable since the DC offense was only broken twice. Furthermore, it was the most throws without any turns of any game in Monroe’s AUDL career, dating back to 2016.

Quite simply, everyone in Colorado raves about Spicer and the impact he’s made on the Summit’s season. Saturday against Seattle was his first multi-block game of the year, as he produced two blocks, three assists, and one goal in Colorado’s 22-14 triumph over the Cascades. But as usual, the stats only marginally measure his contribution, as his defense in the reset space has been disruptive every time he’s stepped on the field. Spicer’s ultimate performance, while excellent, was probably not the highlight of his weekend, though. One day after helping the Summit improve to 7-0, Spicer married his fiancée, Natalie.

The Sol probably would not have escaped Madison with a massive road win without Wylie, who chipped in with two blocks, two goals, and one assist on Saturday night. He was the only player in the game with more than one block, and the 23-year-old Texas State alum also played turnover-free on the weekend, going 22-for-22 and accumulating over 300 yards as a key disc-mover on the Sol’s D-line. Much like Spicer, the stats don’t tell the full story for Wylie’s defensive impact, as Austin often used him to slow down many of Madison’s top cutters.