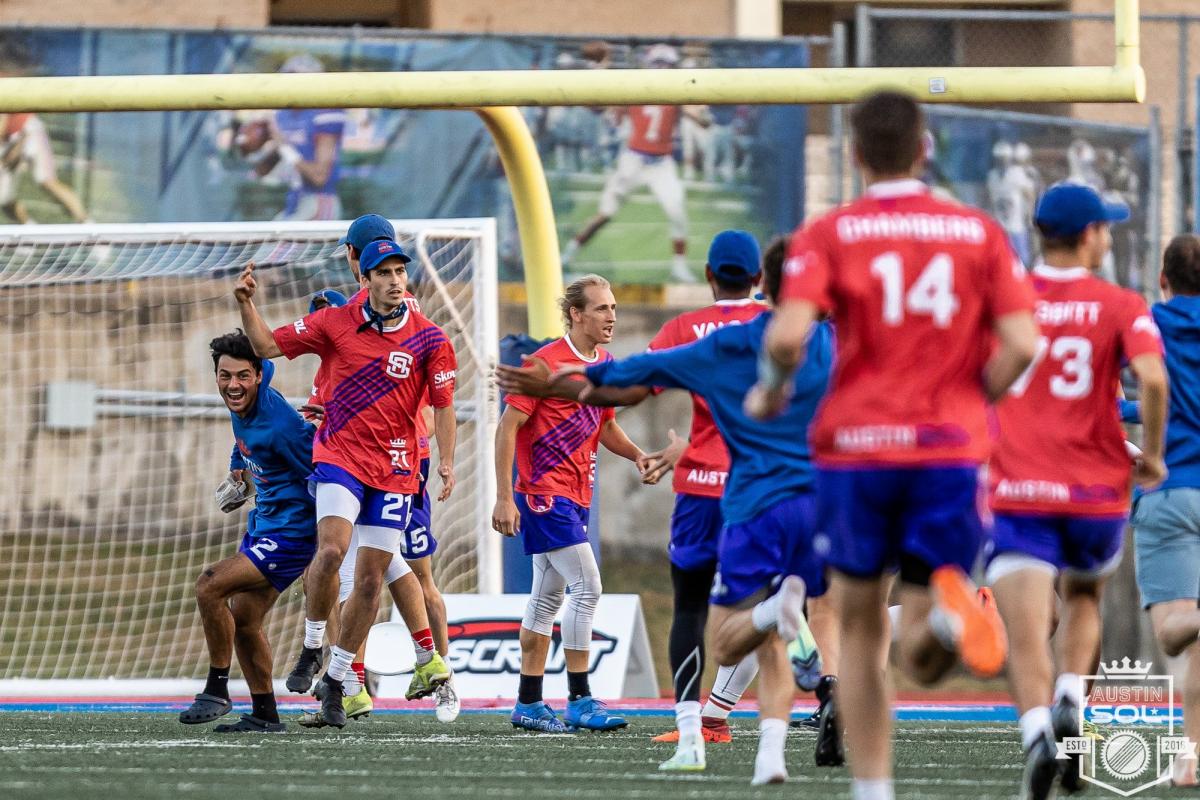 Last night in Chicago the Austin Sol had a chance to take a five goal lead on the Union early in the third quarter. But a costly execution error in the red zone squandered a Sol break attempt, and Chicago seized the opportunity with ferocity; the Union went on a 9-2 run in the second half, and closed out the game with a convincing 24-21 win. The Sol now enter tonight’s “AUDL Game Of The Week” with their season in the balance with a 3-3 record, and face a Madison team determined to get their home field swagger back at Breese Stevens Field. 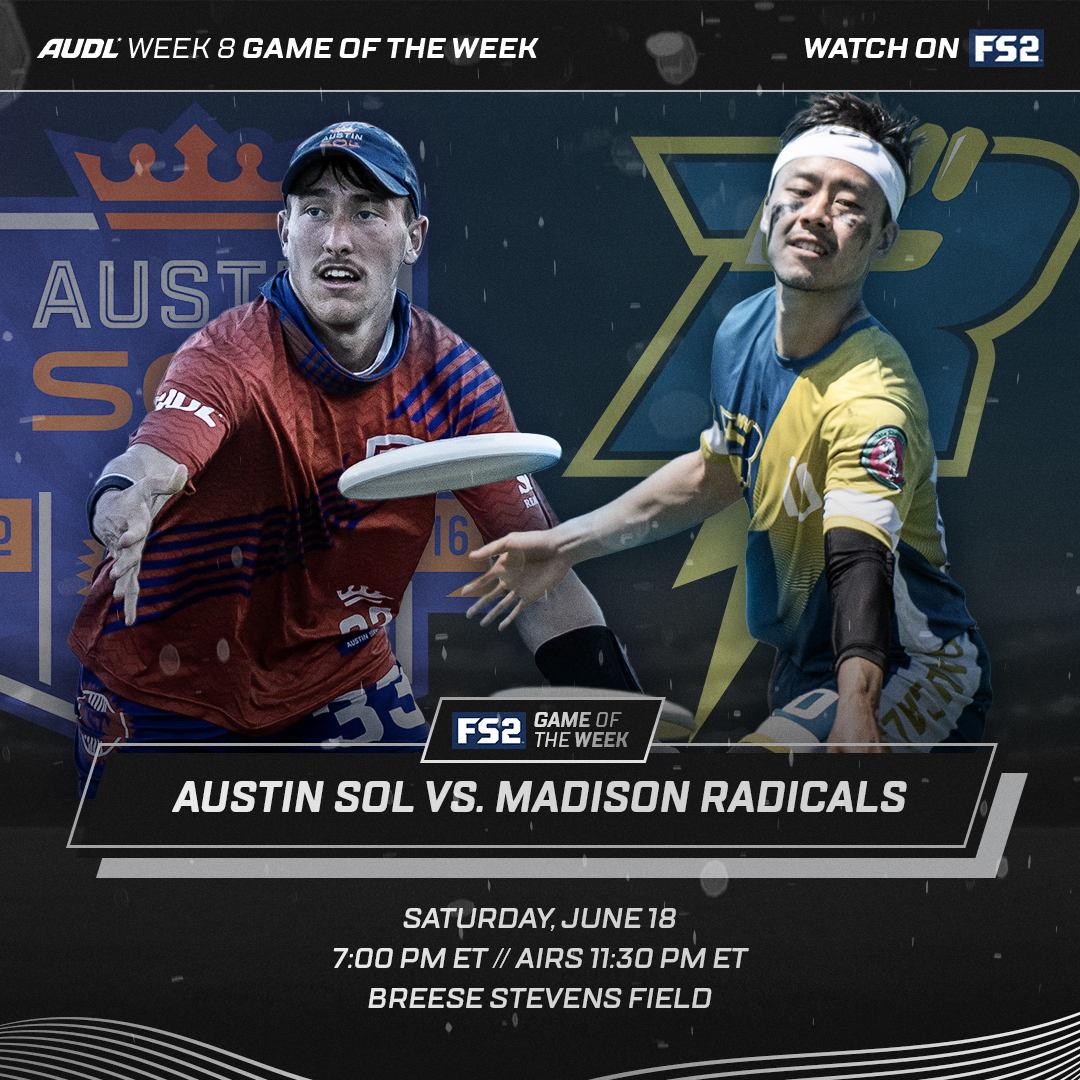 The Austin offense appeared to carry over their precise execution and momentum following the team’s big Week 6 win over Carolina, and was in rhythm the entire first half on Friday night. The Sol scored 12 goals, converted 9-of-11 offensive points, and completed 8-of-10 huck attempts in the first two quarters, with Jake Radack and Evan Swiatek carving some impressive throws through and over the Chicago defense.

But in the third quarter, the Union defense made an adjustment and started to use roller pulls to stunt the Austin offense at the point of attack, and force the Sol to start their possessions working out of a double team. The scheming worked, as the Sol O-line came unglued and committed a series of turnovers amid miscommunication and poor throws; Austin finished the game tying a season-high with 19 turnovers. 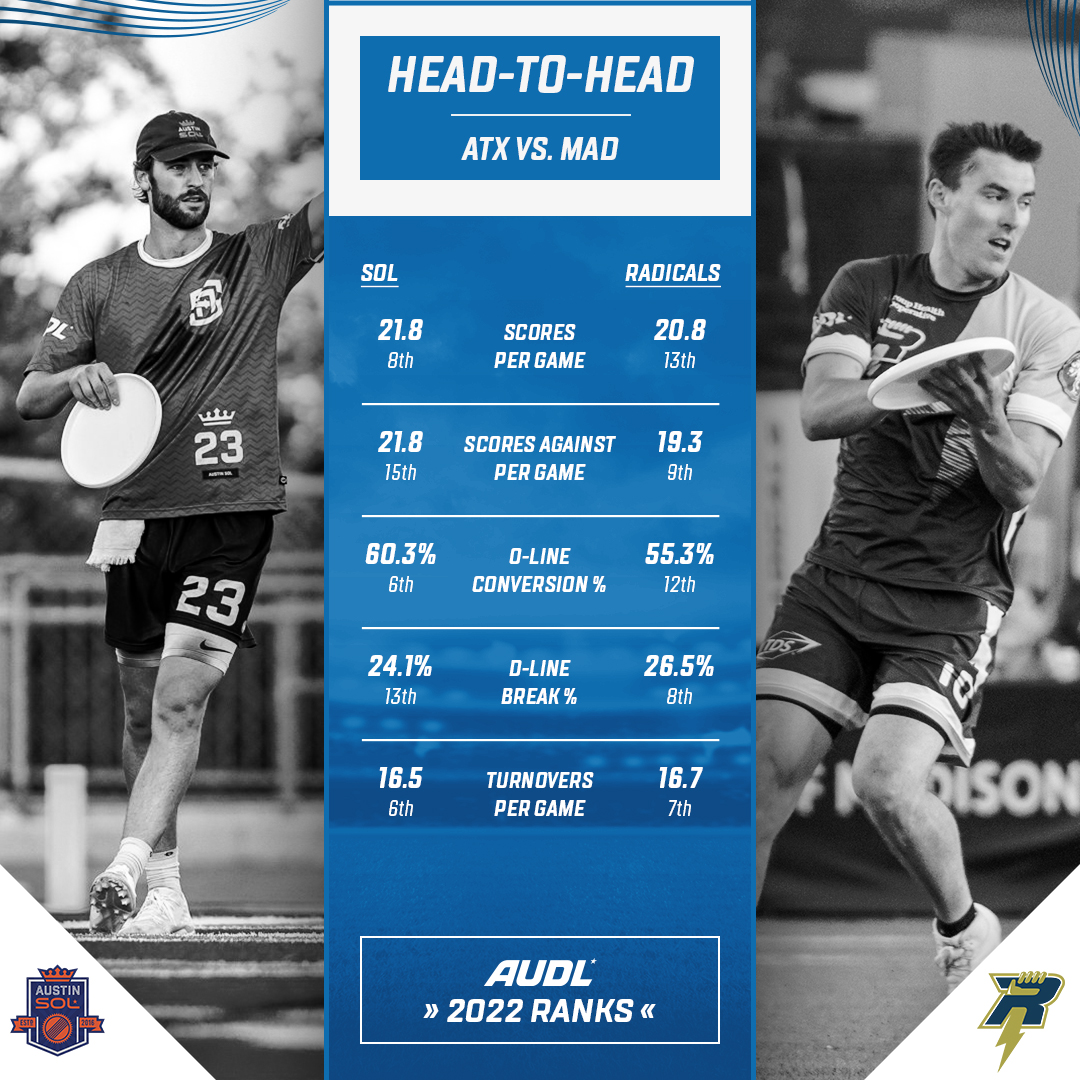 Austin has scored 20-plus goals in all six games they’ve played this season, but the defense has also allowed 20-plus in each of their last four outings. The Sol are 1-3 during that stretch, and are allowing over 24 goals per game. Opponents have been able to attack the Sol defense over the top, as Austin is allowing the second most huck completions per game in the league this season; Chicago was 10-of-13 last night.

The Sol D-line may get some respite tonight in Madison, as the Radicals have struggled to establish their deep attack so far in 2022. With Kai Marcus lost for the season to injury, Madison is just 16-of-35 (46 percent) on hucks in their last three games, and rank bottom five in the league for the season in huck completions per game. Victor Luo has shown more aggressiveness attacking the deep space with his throws in the last two games, but generally the Radicals offense has stuck to its traditionally patient attack. The Sol defense could be problematic if their athletes can get good reads on short routes—Austin defenders are very good at attacking the disc in space, especially on under throws; Mick Walter started the third quarter against the Union with a big poach block.

After last night, though, the real spectacle to watch will be how the notoriously scheme-heavy Radicals defense will play the Sol after watching their rivals from Chicago wrestle a good Austin O-line to the mat with double team traps. Madison loves to use unorthodox and quick-trigger pinch maneuvers as much as any team in the league, so the Sol will have to figure out a solution quickly after their frustrations on Friday. Without the deep option available in the second half, Austin struggled to create space in the midfield and couldn’t operate in tight positions, converting a season-low 78 percent of their red zone opportunities after entering the weekend as the league’s most efficient team around the goal line.

Both teams are coming off losses to the Union, which makes this a big get-right game for each squad. Both franchises currently sit in third place in their respective divisions, and a loss for either would put them outside of the playoff picture heading into the home stretch of the season. The Sol and the Radicals both have expectations to make this year’s Championship Weekend event, but only one team’s dream may remain alive after tonight.