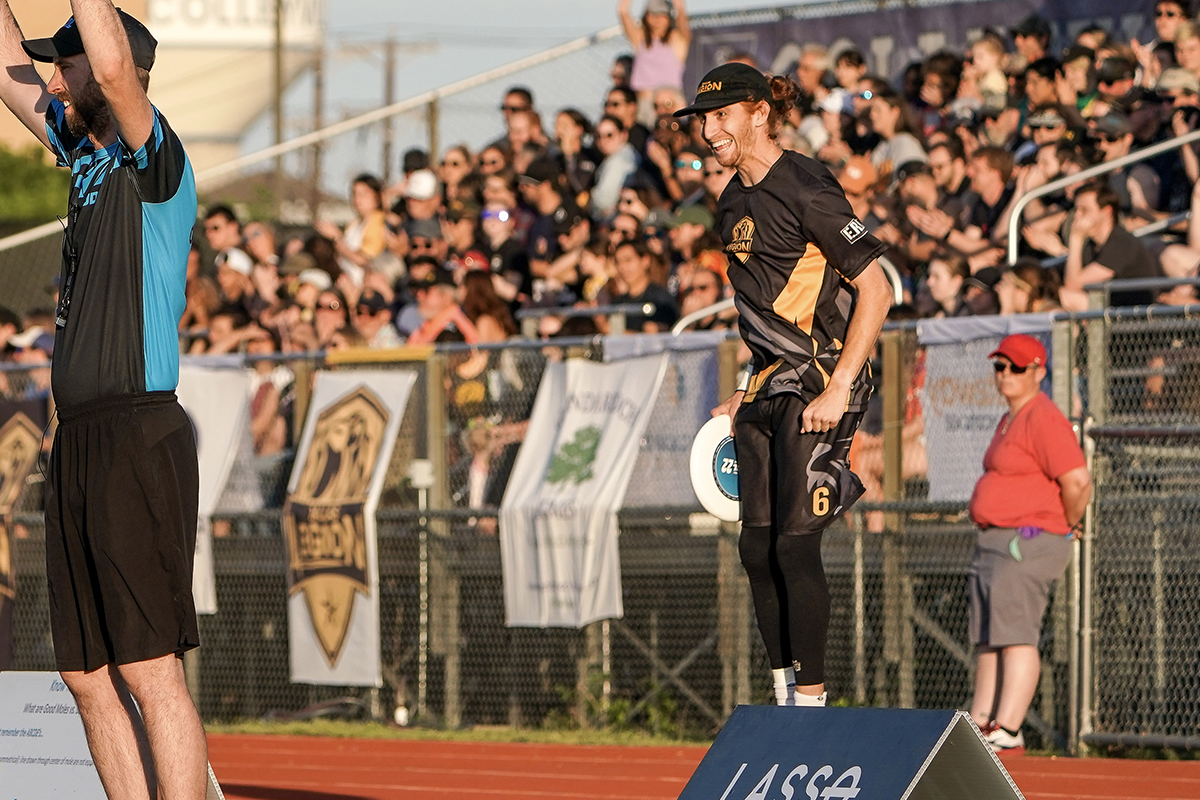 A classic South Division rivalry takes a new form tonight, as the 4-0 Carolina Flyers battle the 0-3 Dallas Legion for the first time since 2019. The game marks the first of Carolina’s double header road trip to Texas, where they’ll also rematch the Austin Sol tomorrow.

The Carolina-Dallas rivalry was one of the most heated in the league since Dallas’ 2016 inception. The Flyers made Championship Weekend in their inaugural season in 2015, but then Dallas came in and took over the South despite the Flyers compiling a .779 regular season win percentage from 2015 to 2019. Carolina would repeatedly rank among the AUDL’s top teams, but it was never quite enough to overcome Dallas in the playoffs; Dallas defeated Carolina in three consecutive South Division Championship Games from 2017 to 2019.

Though Dallas can still lay claim to having made the playoffs every season of their existence, they’ve looked like a drastically different team in 2022, and not just because of the name change. The Legion currently rank at the very bottom of the league in O-line conversion rate, as they’ve only managed to convert 38 percent of their offensive possessions thus far; they’ve never finished with a conversion rate under 50 in any prior season. They’re getting broken on 40 percent of their O-points, a massive increase from last year’s 23.2 percent rate.

While they’ve had a good balance of hybrid cutters in previous seasons—Kyle Henke last season, Connor Olson and Carson Wilder the year before—the Legion offense has looked a bit stagnant this year running everything through their two primary handlers, Brandon Malecek and Jimmy Zuraw. No primary O-line cutter has thrown for more than 300 yards while Malecek and Zuraw have combined for over 1,200 with 180 completions between them through three games. Up against a Carolina defense that has been known to suffocate opposing handlers, the Legion may look to more evenly distribute touches to keep the pressure off the backfield.

Carolina has developed what feels like an unbeatable recipe for winning games. Limit turnovers, maintain (or ramp up) defensive pressure into the fourth quarter, and take full advantage of break opportunities. Through their first four games, the Flyers rank third in turnovers per game, third in scores allowed per game, and fourth in D-line conversion rate. When the offense can lean on co-QBs Sol Yanuck and Matt Gouchoe-Hanas to maintain their efficiency throughout the game, it puts additional pressure on the opposing O-line that already has to deal with a lock-down Flyers defense that plays like one of the most cohesive units in the league. This pressure builds up slowly throughout the game, and then we inevitably see teams like Atlanta in Week 1 and Austin in Week 4 fall apart down the stretch.

Returning to the Flyers lineup this week are bigs Henry Fisher and Connor Russell along with Eric Taylor, who is active for the first time since Week 1. Anders Juengst is still out of the lineup, reportedly dealing with injury, though Alex Davis has filled in admirably as a primary cutter on the Flyers O-line. Davis is a perfect 35-of-35 on throws the past two games, with 16 total scores and over 900 total yards in that span. Without NC State cutting duo Trevor Lynch and Dylan Hawkins this week, Davis should stay plenty busy against a Dallas defense that has allowed five O-line cutters to reach three-plus goals in three games thus far.

The Legion defense has been fairly effective keeping the team in games, and they add back Griffin Miller this week who will make his season debut against Carolina—he could see a lot of Alex Davis in a fast vs. faster matchup. With several playmaking defenders like Alec Wilson Holliday, Ben Lewis, and Andrew Watson, plus a counterattack led by Matt Bennett, the Dallas D-line is going to be the difference if the Legion are going to avoid a blowout. Pressuring the Carolina offense is never easy, but one thing potentially working in Dallas’ favor is Carolina’s tendency to shoot deep; the Flyers average the eighth-most huck attempts per game (14.5), while the Legion defense allows the lowest huck completion percentage in the league (44.4 percent).

Even a year ago, this matchup would’ve felt like a coin toss. But until we see the Dallas offense figure out its identity and more consistency from the team as a whole, these two teams couldn’t feel much further apart at opposite ends of the division.