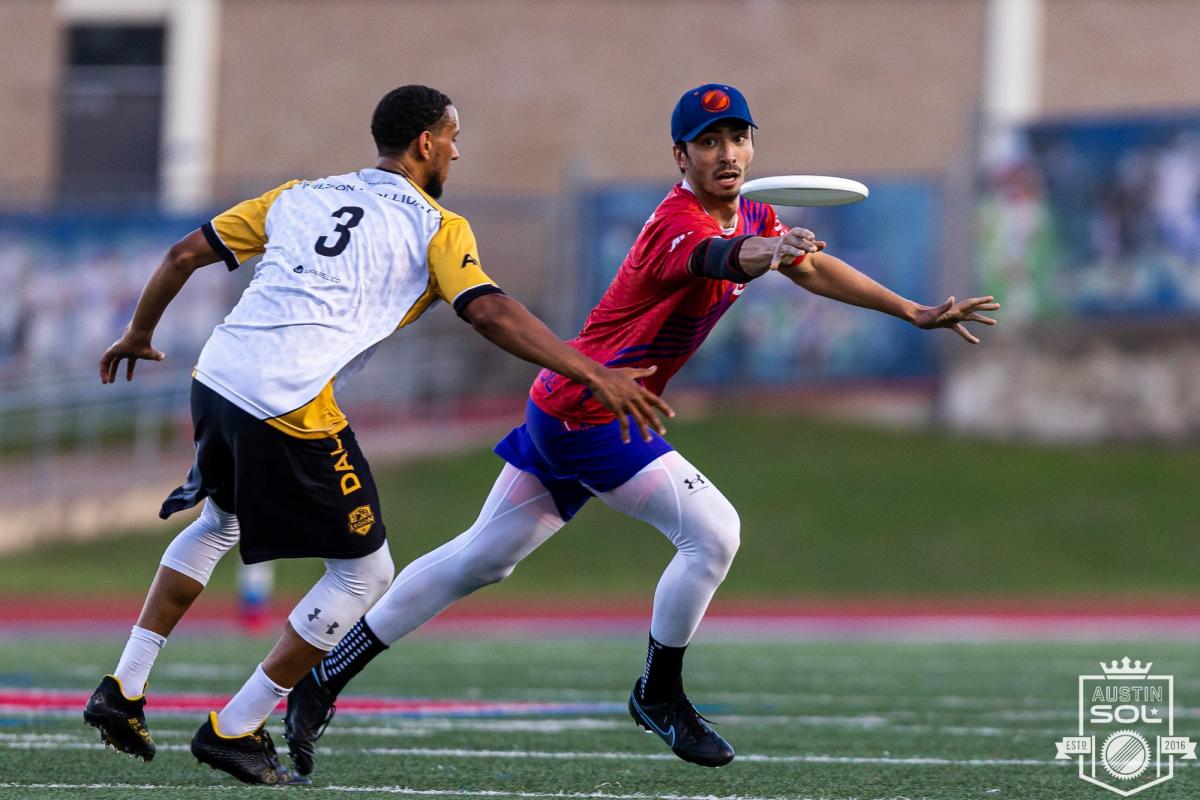 You could call Evans the ‘glue guy’ for Austin’s surging O-line, but that probably doesn’t fully capture his impact as a downfield playmaker. On Saturday night against the defending champs, the Sol don’t win without Evans’ dynamic combination of highlights and reliability. His 497 receiving yards were tops among all competitors across 14 games in Week 6, and the Aussie cutter sprinkled in a few possession-saving skies with his four assist, three-goal performance. In a super tight game, every clutch snag felt mighty meaningful, as did the result, a 21-20 victory for the Sol to hand Carolina its first loss of the season.

Quite a weekend for the almost 24-year-old Henke, who proposed to his girlfriend, Jordan, on Friday night—she said yes!—and then tabulated a game best plus-seven in one of Austin’s biggest wins in the history of the franchise. He also mixed in a marvelous mock-proposal celebration after scoring one of his four goals, sharing a magical moment with his long-time teammate and friend, Elliott Moore. Henke also completed all 24 of his throws, the third straight game he’s enjoyed without a turnover. That’s especially noteworthy for a player who entered the year with a career completion rate of 89.6 percent. This season, Henke only has two throwaways and is completing 98.2 percent of his throws.

Nobody in the AUDL had more total yards in a win this past weekend than Janas, who produced 788—576 throwing and 212 receiving—as the Union rolled to 28-20 road win at Detroit. It was Chicago’s first game since Week 2, but Janas showed minimal rust orchestrating the offense en route to nine assists and two goals. He threw the score on each of the Union’s first three O-points and tallied five hockey assists in addition to his other nine. On the back of Saturday’s performance, Janas moved into third place all-time on the AUDL assist leaderboard with 340. He only trails Goose Helton (373) and Keenan Plew (358), and barring injury, should become the AUDL’s assist king by the end of 2023, if not sooner.

You don’t see someone finish plus-nine while not playing any O-points very often, but the Empire’s Swiss-army knife did just that on Saturday in Toronto. On 15 points, all for the D-line, Katz collected three blocks, three assists, three goals, and 306 total yards, while completing all 25 of his throws. While the Rush offense held on its first four O-points of the game, the Empire defense took over the game from there, registering 15 breaks compared to just four Toronto holds the rest of the way, as New York closed the game on a 21-4 run. Katz’s plus/minus was his best since registering a plus-10 on July 14, 2018, though he played mostly offense on that particular night in DC. He’s never had a more productive D-line day in his five-year AUDL career.

It’s starting to feel routine, but Kerr’s perpetual excellence should not be overlooked. On Friday night against the Oakland Spiders, the Salt Lake lefty basically lapped the field from a yardage standpoint. He led all competitors on both teams in both throwing yards and receiving yards, finishing with 595, nearly 250 clear of the next highest individual total in the contest. He also threw eight assists, scored three goals, and completed all but one of his 27 throws in the Shred’s convincing 30-21 victory. Through the first six weeks of the season, Kerr ranks number one in the AUDL in both assists (38) and plus/minus (+50). An All-AUDL spot feels inevitable at this point, and if Salt Lake can keep winning, there’s no doubt Kerr will contend for an MVP too.

If Austin’s victory over Carolina can be characterized as the biggest win in the league this past weekend, Philly’s triumph over Boston was a close second. (Shout-out also to Los Angeles stealing a road result at Portland!) The Phoenix are now 3-3 after an 0-3 start, with Pollard’s all-around abilities helping to lead this surge. On Saturday against the Glory, the 25-year-old produced four assists, two goals, and one block, while completing 25-of-26 throws. That’s basically become Pollard’s average evening this season, the first of his career that he’s played primarily O-line. Midway through the campaign, he already has career-highs in assists (21), goals (14), plus/minus (+31), and total yards (2,332). He’s currently one of just eight players in the league with at least 1,100 yards throwing and 1,100 yards receiving.

There are a bunch of versatile dudes in the league, but Vouhnoutka continues to stand out amidst his ever-evolving role for the Wind Chill. Case in point: on Saturday against Indy, B-Von played basically half the game on O and half on D, making positive contributions no matter when he took the field. He finished number one on the team in blocks (3) and number two in total yards (376), while also contributing three assists and six hockey assists amongst his 22 throws, all but one of which were completed. Most importantly, he helped lead an onslaught of breaks over the final two and a half quarters against the AlleyCats. After trailing 7-6 and recording just one break in the first 18 minutes, the Wind Chill produced 15 breaks over a 30-minute stretch where Minnesota outscored Indy 21-7.