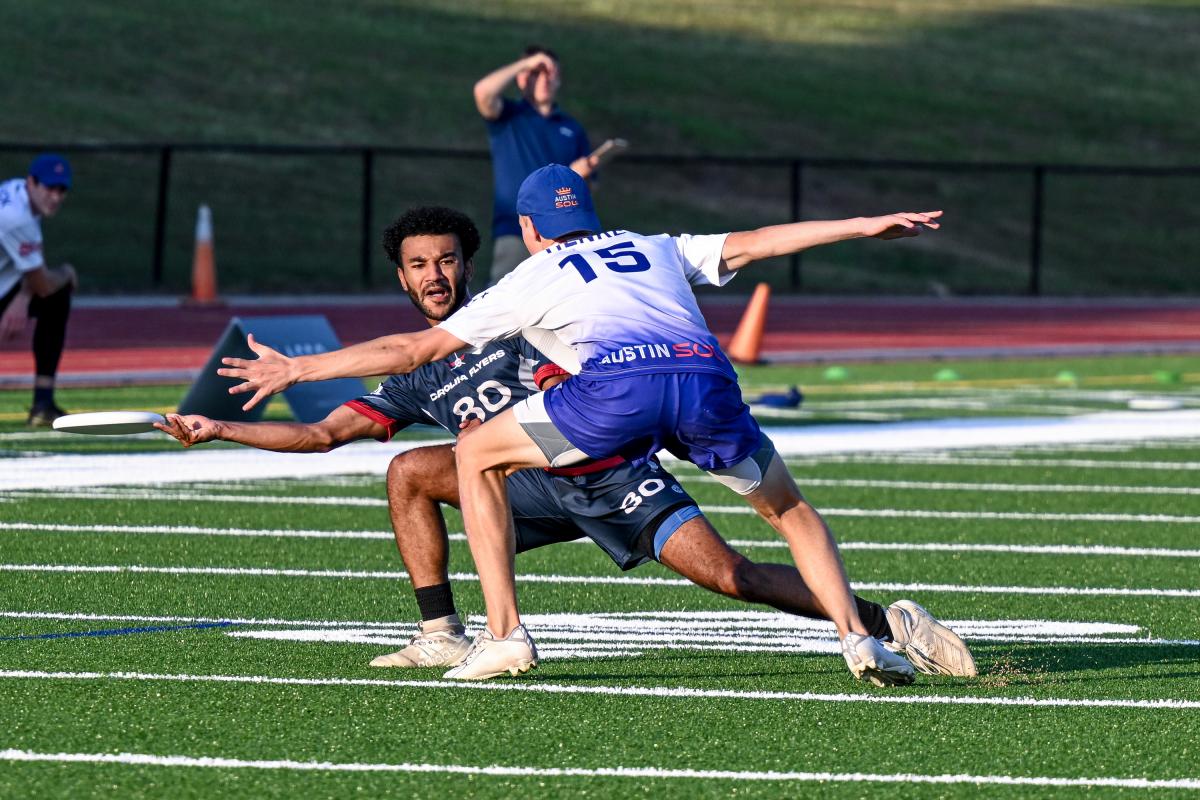 The Carolina Flyers dispatched the Legion in Dallas 26-18 on Friday night to improve to 5-0, and now face a rematch with the Sol in Austin. The Sol jumped out to an early first quarter lead on Carolina in Week 4, but the Flyers got crucial defensive takeaways in the second half to earn a come-from-behind 27-24 win at home. As a result, Austin sits on the outside looking in on the two-seed playoff race in the South, and needs a win against the Flyers to edge back into contention. 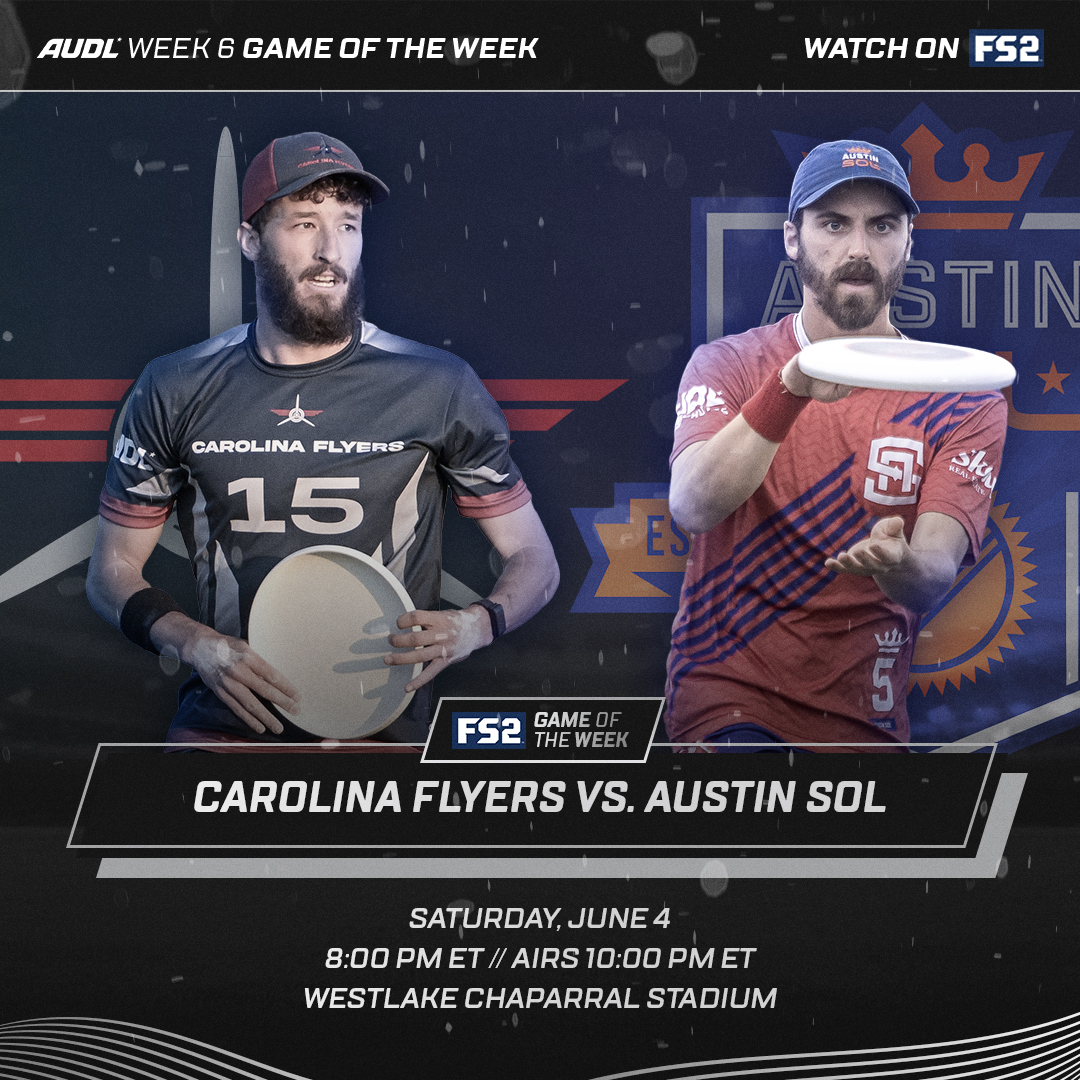 The balanced attack of the Flyers offense has been too much for opposing defenses of late. The Flyers have tallied 24 or more goals in each of their last three games, and are 30-of-38 on hucks in their past two matchups, including 14-of-17 against the Sol. Sol Yanuck leads the team once again in a majority of passing categories, and is Carolina’s visible anchor on offense. But 12 different Flyers have five or more assists already this season, and Carolina’s ability to attack with their throws from virtually any position on the field has given the team the range to unleash its deep attack with little hesitation.

And though big receivers Jacob Fairfax and Henry Fisher are still heavily involved in the Flyers game plan, second year speedster Alex Davis has emerged as the team’s premier deep space and red zone target, and is having a breakout year. With 2021 All-AUDL member Allan Laviolette done for the season, and 2021 Rookie Of The Year Anders Juengst sidelined until possibly August, Davis has elevated his play in recent weeks and become more insistent in his route running. In his last three starts, Davis is averaging six goals and 341 receiving yards per game, including a career performance last night against Dallas to the tune of  eight goals, 394 receiving yards, and five hockey assists; Davis often looks unphased running rampant on opposing defenses, and his nonchalant dominance is emblematic of this Flyers team as a whole that has won eight straight games—including a title—dating back to 2021.

The Flyers also, simply, do not turn the disc over. Carolina committed a season-low nine turnovers against Dallas on Friday night, and have not committed 20 or more turnovers in a game since July 2019; the Flyers streak of 21 games without crossing the 20 turn threshold is the longest of any AUDL team, ever. Even after committing seven turnovers in the first quarter against the Sol in their last meeting, the Flyers would commit just six more errors over the next three frames of action, and finished with just 13 total turns.

Disarming and defusing the Flyers offensive attack will be Austin’s main task once again tonight. The Sol started their last matchup against Carolina with an interesting tweak to their defensive lineup, slotting in Evan Swiatek on the D-line and cashing in with two early break scores to their playmaking receiver. But the Sol were not able to sustain much pressure throughout the contest, generating just six blocks and allowing the Flyers offense to gain momentum down the stretch. Mick Walter tied for the lead league in takeaways last year, but has been limited to just one game so far in 2022 and is a game time decision tonight; Austin has struggled to replace Walter’s block production in his absence. 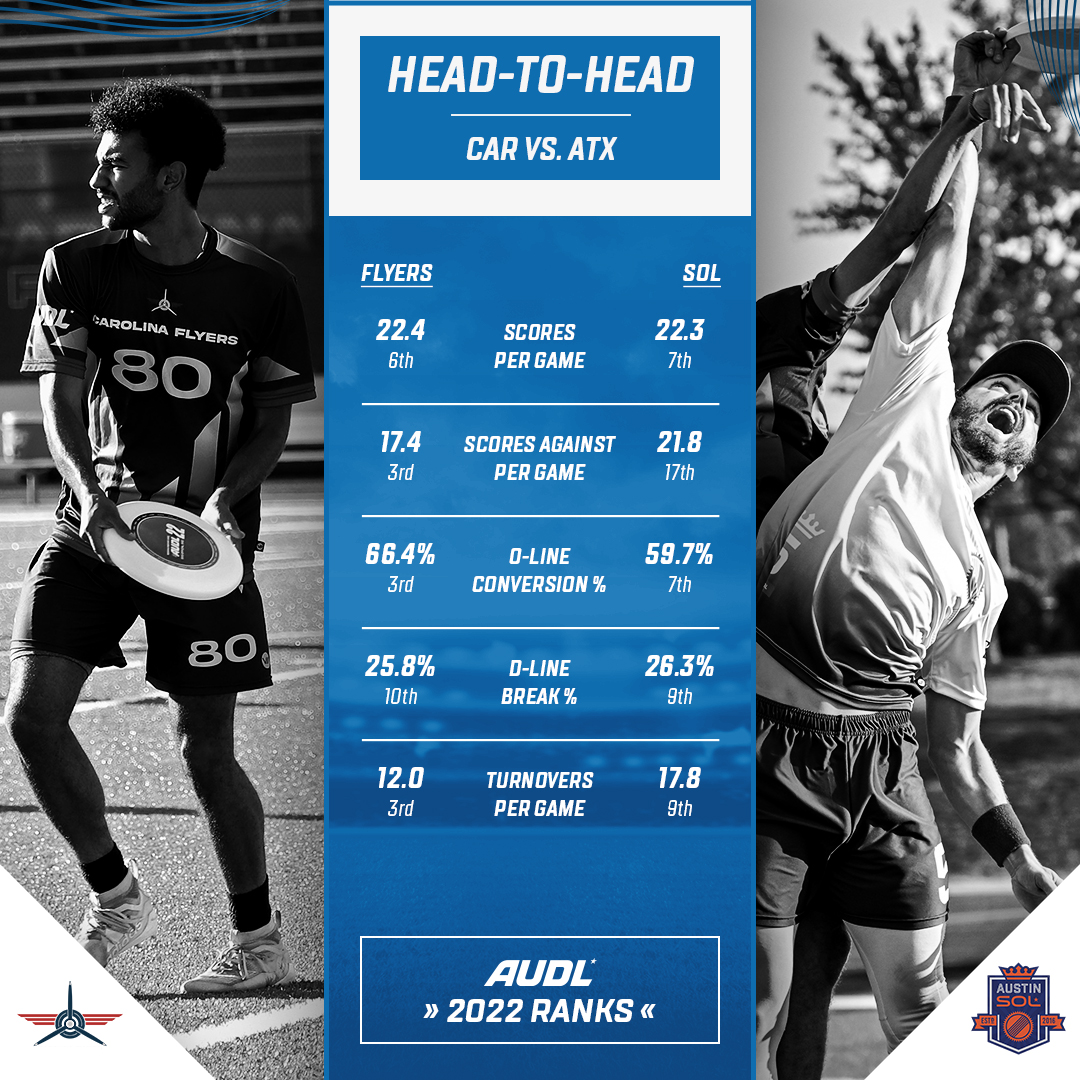 The Sol are off to a franchise-best start on offense thanks to the throwing core of Jake Radack, Paul Starkel, and Mark Evans. All three have skills that complement each other, and they provide a great foundation for the Austin O-line, with Radack and Starkel primarily handling the backfield duties, leaving Evans to probe and attack as a motion passer. The Sol—similar to Carolina—have confident throwers all over the field, and their balance allows the offense to work through easy drives. Austin is one of just two teams to score 20 or more goals in every game this season, and they’re seventh in offensive efficiency.

“They possess the disc really well,” Carolina Head Coach Mike DeNardis said about the Sol in the Week 4 “Tuesday Toss”. “They have really smart players. It’s very much like Atlanta. You have to find the little cracks in the armor, and that’s just by attrition. You just have to keep coming after them.”

Carolina and Austin rank first and second, respectively, in red zone efficiency this season, making every goal line opportunity tonight of crucial importance for both teams—there is little to no room for execution errors. The Sol will need another hot start to keep with the pace of a Flyers team already rolling after last night’s win. Carolina has won the last five matchups against Austin dating back to 2018, and the Sol might need another overtime effort to break the streak and best the undefeated reigning champs.