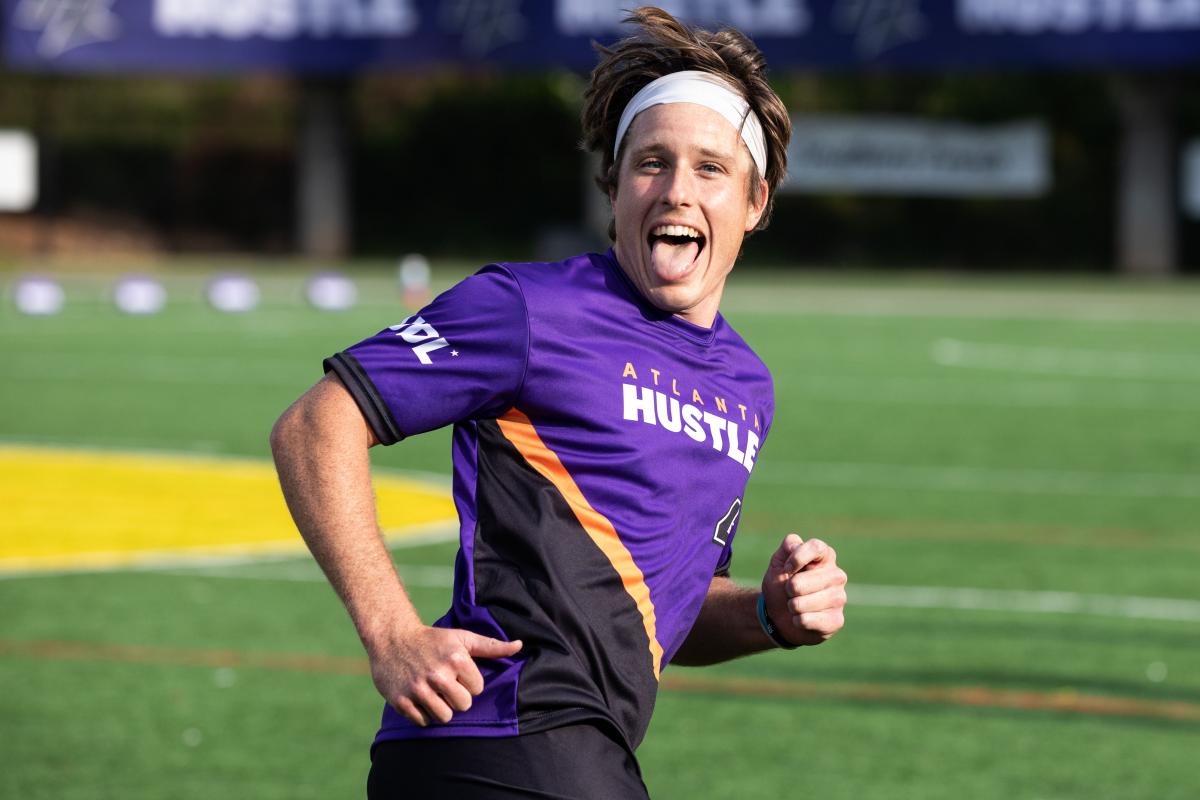 Saturday, May 21
By Adam Ruffner

After falling last night on the road 27-24 to the defending champions in Durham, the Austin Sol continue their second game of a road back-to-back tonight as they face the number one ranked defense of the Atlanta Hustle. And with just two playoff seeds in the South Division this year, the Sol face a virtual must-win game in the first month of the season. 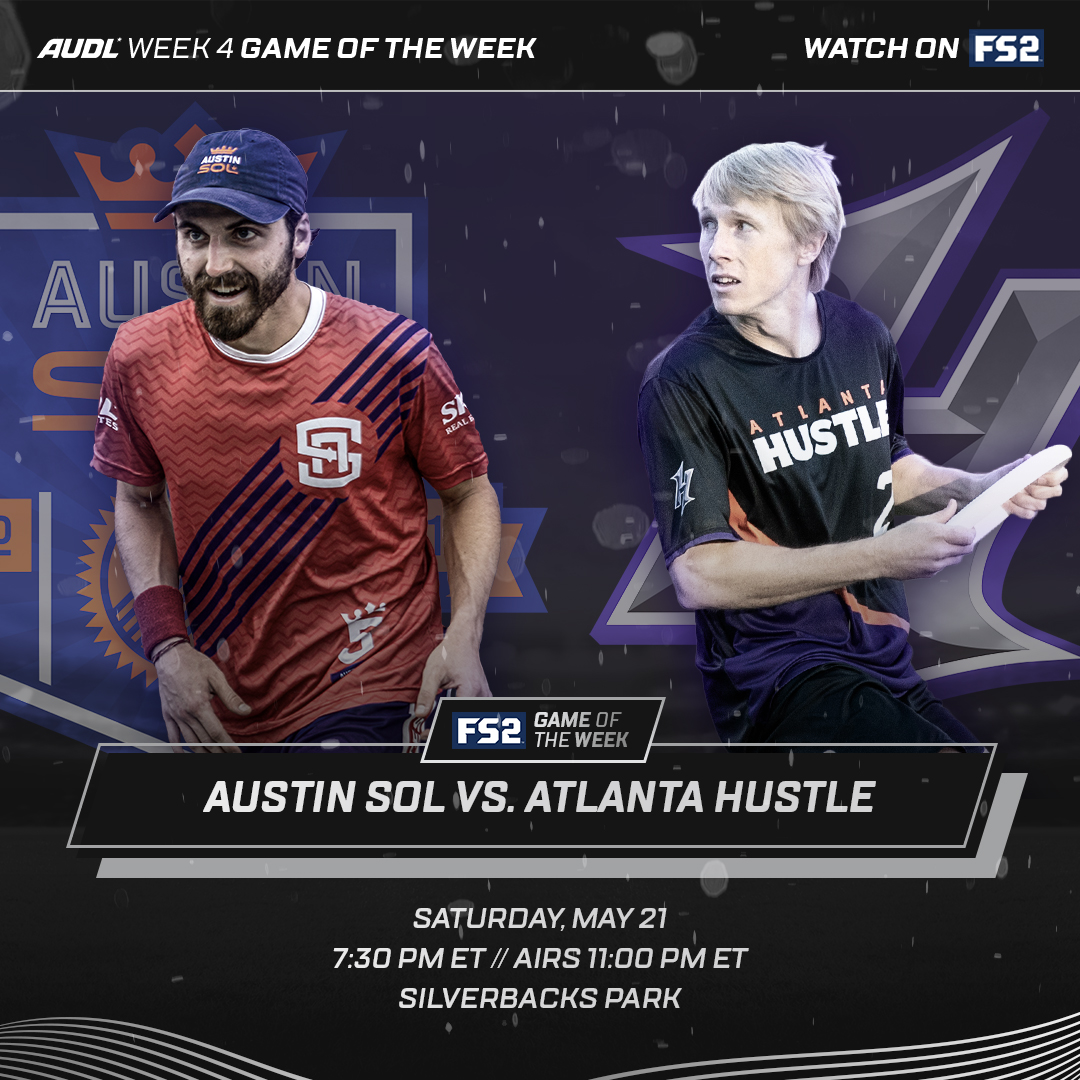 Austin started strong against the Flyers on Friday. The Sol opened up a 7-4 lead in the first quarter thanks to efficient play from their offensive line, as well as the three break conversions Austin earned from exploiting some uncharacteristic Carolina turnovers. Evan Swiatek was once again the main target downfield, besting multiple Flyers defenders in the air for scores, and finishing with a game-high five goals to go along with 494 yards of total offense. Even against a top tier defense like the Flyers, Swiatek was still able to dictate many of his receiving routes with his speed and next-level field reads; he always seems to know where to be for the continuation throw, especially in the red zone.

But after forcing seven Flyers turnovers in the first quarter, the Sol defense was unable to disrupt the Carolina offense over the remaining three frames of the game. Austin led the league in takeaways in 2021, and had 26 blocks in two games coming into Friday night. And yet the Sol’s defensive pressure yielded just five total takeaways against the Flyers—Austin’s lowest block total since June 2019—including just three blocks over the final three quarters of play. Without the presence of some of their top defenders in Mick Walter, Elliott Moore, and Zach Slayton on the D-line this weekend, the Sol were stuck on the field for long Carolina possessions, and wore down in the second half.

And despite all of that, the Sol gave the Flyers one of their best battles over the past two seasons, not relenting until a late fourth quarter Justin Allen layout Callahan pushed Carolina to an insurmountable lead. Austin’s center handler Jake Radack has shown throughout the first three games of the season that he is capable of taking on one of the most demanding throwing roles in the league, while Kyle Henke continues to have his most efficient season ever in his fifth year; Henke has just two turnovers so far this season, including a perfect 24-for-24 throwing performance last night that netted him 365 total yards. 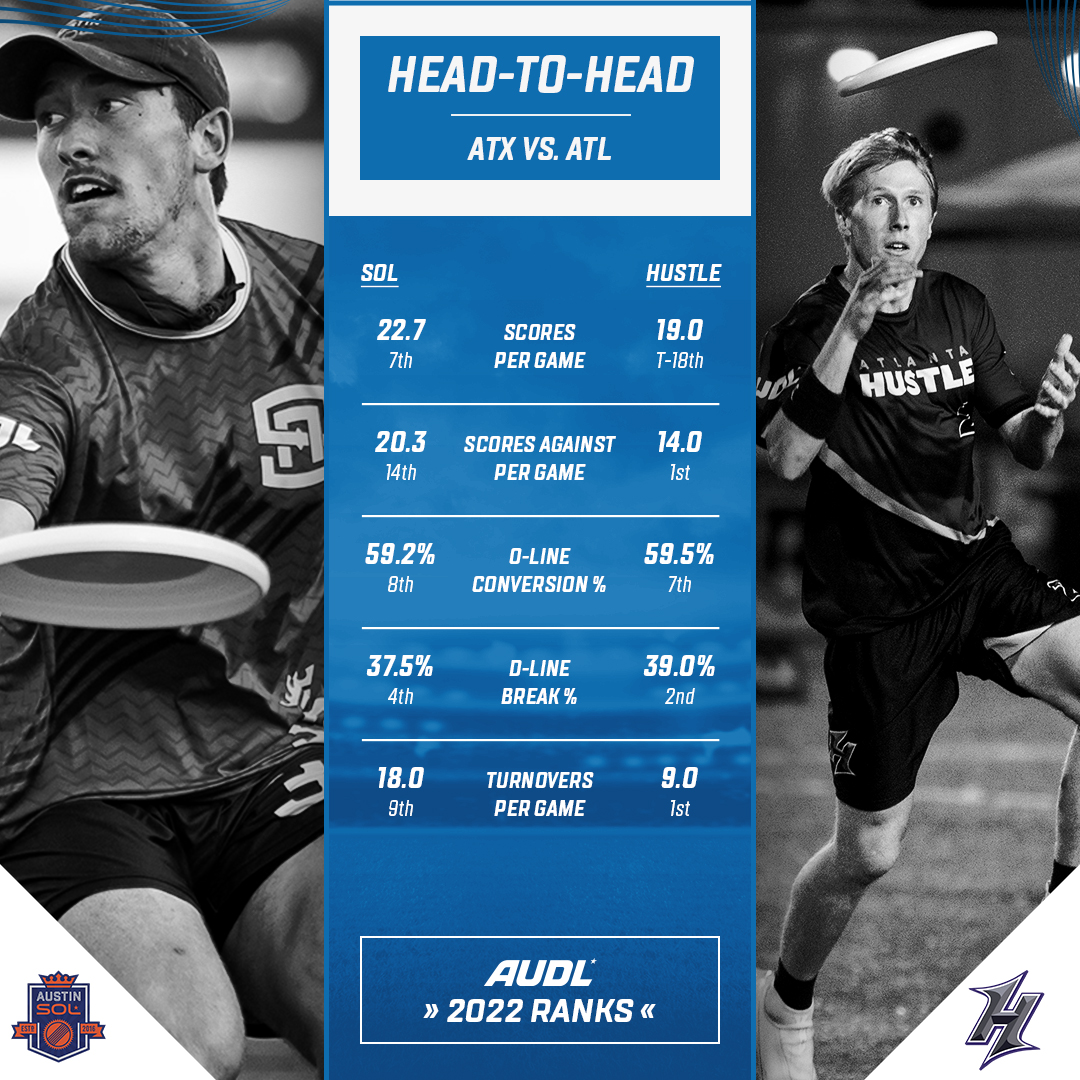 Austin will need to continue to limit turnovers against a Hustle defense that is one of the best at capitalizing on an opponent's mistakes. Through three weeks of the season, the Hustle defense is first in scores allowed and second in break conversion rate. And that has been without Brett Hulsmeyer in the lineup, who tied for the league lead in blocks in 2021. Hulsmeyer, along with veteran defender ​​Michael Fairley, will be making their season debuts tonight against Austin. The Hustle will likely run a lot of zone looks with both available in the lineup; Fairley is a terrific matchup at the point of attack owing to his combination of size, agility, and field IQ, while Hulsmeyer is the best deep defender in zone coverage in the league. And without Khalif El-Salaam in Week 4, Hulsmeyer and Fairley’s returns could not have come at a better time in a crucial divisional rivalry matchup.

Atlanta also has two big season debuts on the offensive side of the disc, as John Stubbs and first-year Hustle addition Bobby Ley figure to slot in alongside All-AUDL thrower Austin Taylor in the backfield. When available in 2021, Stubbs looked like an all pro, able to play both ways, and averaging over three assists per game in six regular season appearances. Ley was one of the most potent deep passers in the league last season, averaging over five assists per game, and finishing fourth in hucks completed despite playing in just nine games. Taylor and the Hustle offense have been searching for more balance beyond their QB1, and there might not be a more complementary pair than Stubbs and Ley.

The Sol looked at their best last night when they played uptempo offense, nimbly working the disc between their many parts. Atlanta may be the best team in the league at slowing down opposing attacks and overloading throwers. “Endure and adjust” could be the theme for both teams tonight as it figures to be one of the best clash-of-playstyle matchups of the 2022 season.